Read Will You Marry Me? (Sam Darling Mystery Book 4) Online

Will You Marry Me? (Sam Darling Mystery Book 4) 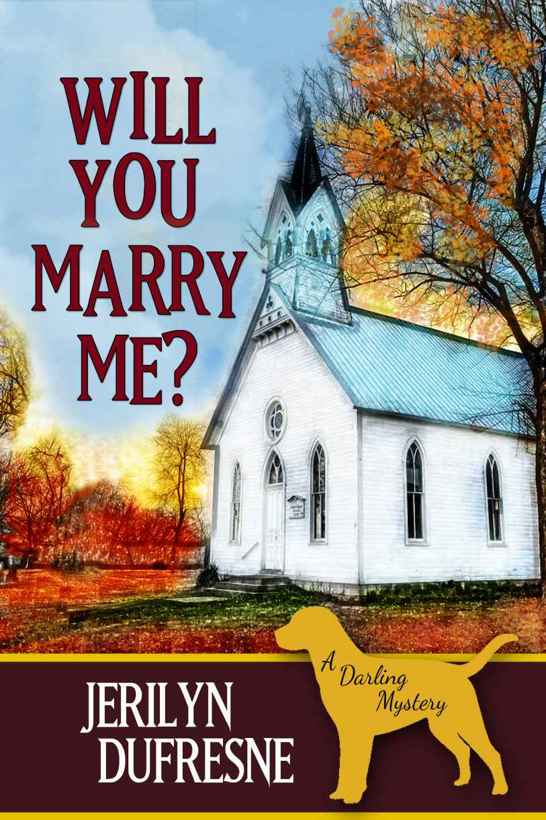 WILL YOU MARRY ME?

There's a Chicken Convention in town as Sam Darling takes her curiosity on the road and tries to solve another murder--and this time the feathers are flying!

Savvy sleuth Sam and her canine sidekick Clancy are at it again in the fourth book in Jerilyn Dufresne's bestselling cozy mystery series.

Sam and her sweetheart George are headed off for a well-earned vacation.

That is, until Clancy digs up a mysterious human bone.

With help from the Bobs--Bob Bob, Jim Bob, Joe Bob, Mike Bob, Billy Bob, and Mary Bob--Sam jumps in as always to help figure out who done it.

How far will Sam go to solve the case?

Far enough to squeeze into a fluffy chicken suit and infiltrate the world of those who love to cluck.

Once again, intrepid Sam goes from the frying pan into the fire...but will she get burned?

What they're saying about the writing of bestselling author

Dufresne has created a charming, nosy, and slightly irreverent character in Samantha Darling, the heroine in
Who Killed My Boss?
, a fast-paced cozy that takes place in the small town of Quincy, Illinois.

The plot kept me guessing until nearly the end and I am looking forward to reading further adventures! Fun and entertaining read. Highly recommended...well done!

Anne Kelleher, author of
A Once and Future Love
and

The Ghost and Katie Coyle

Dufresne shows her gift of storytelling as she moves the plot forward, introducing believable characters and a complicated plot. Recommended to everyone who enjoys a well-written, fun, cozy mystery!

And from Amazon reviewers:

...It's like reading the old Nancy Drew books with others. Loved it very very much!

...This book was very well written and I loved all the humor sprinkled throughout the story. Characters were loveable, not to mention the dog. Great ending.

...Sam Darling is the kind of gal you wish you could know in real life. Funny, quirky, entertaining. And her "partner," Clancy the dog, helped make this book just plain fun to read. When's the next one?!

Any Meat in That Soup?
(Sam Darling mystery #2)

Can You Picture This?
(Sam Darling mystery #3)

Will You Marry Me?
(Sam Darling mystery #4)

Will You Marry Me?

The author appreciates your support in respecting her rights to this work. There is much joy in writing, but artists deserve to be paid.

Want to find out about new books by Jerilyn before anyone else does?

To the Housewife Writers, who have been encouraging me since 1995, for cherishing me even though I'm neither a house nor a wife.

"The scream echoed through the canyon and bounced back to me, hitting me so hard I almost fell over."

My excitement about our trip could not be dampened. George and I were going away and we were taking Clancy with us. What could be better?

Gus and Georgianne, my landlords, were at my carriage house pretending to listen to my instructions on how to care for the place in my absence.

"Calm down, Sam," Gus said. "You act like we've never been in this place before. We watched it when you were in the hospital after getting shot in the bottom, when you were poisoned, when you had to stay at George's because your life was threatened, when...."

"Okay, okay," I said, "I'm convinced." I didn't want to hear a litany of the times I'd been hospitalized or otherwise unable to be in my cozy nest. Or rather their cozy nest. They owned it, plus the mansion that sat in front of it.

I looked down at my dog, Clancy, sitting faithfully at my side. Her thoughts intruded on the talking. She was amused by Gus's speech.

"Clancy, that's not nice. Are you sure you want to go with us?"

Her thoughts were kinder after that, and her soft growl meant she gave in.

"George is going to pick up Clancy and me in a few minutes. I know I've forgotten something. I just know it," I said as I continued to look around.

Recently I'd begun taking medicine for ADHD and my system was still getting used to my brain slowing down a bit. It was a welcome respite from my normally unwelcome impulsiveness and inattention, but at times there was a brain fog I didn't like.

"If you forgot something just give me a call. Hell, you're never without that fancy phone of yours." Gus was allowed to tease me. He was almost an adopted grandpa and my best friend. Well, besides Clancy.

"Samantha, we are honored you want us to watch your place. I'd be pleased to check every room while you're away. On a daily basis." Georgianne was my friend too, but I didn't quite trust this offer.

"That's okay, and not necessary. I'm sure it will be fine. There are no plants to water--I've killed them. I'm taking my dog with me. Everything inside is in working order. I stopped my mail. So all you have to do is keep an eye on the outside."

I prayed that Georgianne could keep her paws off my house. Even though I inherited my nosy gene from my mom, I preferred to call myself curious. I saved the nosy moniker for Georgianne.

But I loved her. Couldn't help it. She was my best friend's wife.

I was still looking around when George walked in. We kissed, and my day was made. Nothing could bring me down when I had George and Clancy at my side. I felt like I could conquer the world, and was ready to leave Quincy so I could do it.

A quick kiss and hug for Gus and Georgianne, and a conscious locking of my door, and we were off.

"I love you," was all I could think to say to them as we waved goodbye. The air was crisp but tolerable and the sight and smell of leaves falling off the trees announced the middle of autumn without the need for a calendar. I left my window open so I could smell the season.

There was also a whiff of George's Hai Karate aftershave, which always took me back to high school. He was my friend from kindergarten on, but was my boyfriend in high school. That relationship ended abruptly when he stood me up for prom. Twenty-five years later, I've not only forgiven him, I've fallen in love with him again.

He started chatting about something. He was the Chief of Detectives at Quincy Police Department, and was probably talking about a case, but I drifted off, thinking about how the last several months had made me love him even more than before.

Finally, I tuned back in.

"So it's really important that you and Clancy come with me to the Grand Canyon. It's the first place I want to travel to as a couple, er...um...a triple." George was adorable, always making sure to include Clancy in everything. She was the only reason we were driving rather than flying.

"You know," I whispered, "we could have left Clancy with Gus. She would have been fine, and we could have flown, giving us more time there."

Clancy, relegated to the back seat of the rented SUV, perked up her ears and started "talking." Her low growl sounded kind, but then she put in the inflections that would let anyone know she was unhappy with that remark. Not only do Clancy and I have a psychic connection, sort of, she also "talks" quite eloquently once you learn to understand her language.

"Sounds like you two are in collusion." I couldn't help but smile. I loved them both so much, and to see their connection intensified my feeling of joy.

It felt great to be on vacation. Even though I'd started work as a therapist at the Quincy Community Clinic less than a year ago, and didn't really have vacation time saved up, I still felt the need for relaxation. A few months ago, I was in the ER with a bullet in my butt. Prior to that I'd been hospitalized because I'd been poisoned. I still couldn't believe people in Quincy had actually tried to kill me. Shaking off any fear, I was determined to enjoy this trip.

George crossed the Mississippi into Missouri and drove south on US-61. We planned to drive to St. Louis and take I-44 southwest. He had it all planned out, but I wasn't too interested. I listened to the music, looked at George, and absentmindedly reached back to pet Clancy.

What a wonderful life I had. And to think--the excitement we were going to experience on the trip was planned, not accidental. Rare for me, recently.

"Not much. Between planning for the trip and finishing up paperwork on some cases, I didn't get too much shuteye."

"Let me drive for a while, and you can rest." I wanted to pull my weight on this trip so George didn't have to do everything. After all, I had been the single parent who took my kids camping, backpacking, spelunking, and climbing, and I drove all over the USA. I was a pretty capable person, and there was no reason to change just because I was in a relationship.

I smiled, feeling like I'd won a non-existent argument.

Just as he had promised, George pulled over after we hit 44. We changed places, and Clancy didn't move a muscle. I hooked up my iPhone to George's radio and listened to my own songs as I drove. George was asleep before I even had the Bluetooth set up.

Time passed quickly, and before I knew it we were nearing Springfield, MO. On an impulse, I turned south on US-65 toward Branson. I wanted to see the famous city where people flocked from all over the world to see the shows.

The journey was easy and definitely not exciting. I drove around the town, rather than through it, deciding at the last minute that there was nothing there of interest to me.

Clancy's whine let me know she needed a bathroom break, and the needle on the gas gauge informed me the car needed filling. I took a random exit and drove on a narrow road until I reached a town. The sign said "Crackertown, 'We're the Ritz of the Ozarks.' Population: Varies."