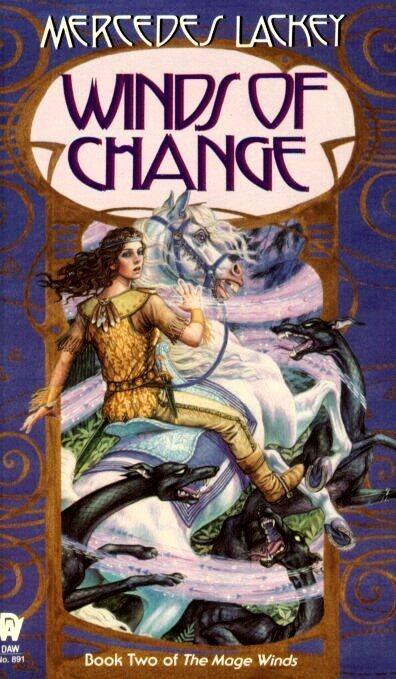 For long years, the rich northern kingdom of Valdemar, ruled by Queen Selenay and her consort Daren, had been under siege by the forces of Hardorn
(Arrows of the Queen, Arrow’s Flight, Arrow’s Fall, By The Sword).
Ancar, its ruthless and cunning leader, had first tried treachery against the rival country’s court; that had been foiled by the Heralds of Valdemar, the judges, lawgivers, and law-enforcers of their people. He could not corrupt them, for it was not in the nature of the Heralds, Chosen for their duties by the horselike creatures called “Companions,” to be corrupted. He then tried direct attack - that was foiled by the forces of neighboring Rethwellan to the south, brought by an old promise of aid, long forgotten in Valdemar. Those forces included the mercenary company of the Skybolts, commanded by Captain Kerowyn, grand-daughter of the mage Kethry (whose own story is related in
The Oathbound
and
Oathbreakers).
Kerowyn brought more with her than just arms and fighters; she brought with her an ancient and powerful enchanted weapon, the sword her grandmother had borne; Need, who for reasons then unknown could be commanded only by a woman. With her she brought the King of Rethwellan’s own brother, Prince Daren, the Lord Martial of his country, also the younger brother of Selenay’s former treacherous husband. The result was the successful defeat of Ancar’s forces - and the Choosing of both Daren (for he was nothing like his brother) and Kerowyn by Companions, much to the consternation of some of Selenay’s nobles.

And Daren and Selenay had loved each other at first sight.

Five years later, they had produced both progeny and an uneasy peace, although Ancar continued to make attempts across the border, and insinuated spies inside Valdemar. But the one thing of which all felt sure, was that they were safe from magic.

In fact, few people in Valdemar even believed in “real” magic, although the mind-magic of the Heralds was commonplace. An ancient barrier, attributed to the work of the legendary Herald-Mage Vanyel, seemed to hold the
working
of real magic at bay inside Valdemar’s borders, if not its effects. Further, it seemed as if there was some prohibition about even
thinking
of real magic; those who discussed it, soon forgot the discussions; those who witnessed it soon attributed their memories to dreams. Even old chronicles that spoke of it were forgotten, and those who tried to read them found their interest lagging and put them away without a memory of why they had sought them out in the first place.

But one day, it became plain that this barrier was no longer as effective as everyone believed and hoped. The Queen’s Heir, her daughter by her first marriage, made the decision that the time had come for Valdemar to have the same manner of magic its enemies wielded
(Winds of Fate,)
and perhaps new magics as well.

She fought for the right to seek out the mages of other lands herself - more successfully, after a magically-enhanced assassin sent by Ancar nearly killed her - and set off with the sword Need and one other Herald, Skif, to find mages for Valdemar.

She had not gone far beyond Rethwellan when she deduced that she had not done this alone - that the Companions had acted on her behalf, and were, in fact, forcing her toward a goal only they knew. Angered by this, and swearing that she would follow her own path in this venture, Elspeth turned off the road she had been intended to take, and headed instead for Kata’shin’a’in and the nomads of the Dhorisha Plains - who, she hoped, would lead her to the mysterious Hawkbrothers of the Pelagirs. The last of the Herald-Mages, Herald Vanyel, had been reputedly taught by them
(Magic’s Pawn, Magic’s Promise, Magic’s Price)
and she hoped that she could find either allies or teachers there.

The Shin’a’in had their own set of plans for her, once they learned of her destination. They intended to test her, watch her, and allow her to face some of their enemies as she crossed their land.

Meanwhile, the sword she carried, that she had thought was “only” a magic weapon, proved to be more than that. In her hands it awakened - and proved to be a once-human mage of times so long past that there was no record of her previous life, or anything Need referenced, in the Chronicles of Valdemar.

Together the Heralds, their Companions, and the newly-awakened blade crossed the Dhorisha Plains, only to find themselves going from old dangers into new - for the Tayledras territory they headed for, following a map that the Shin’a’in shaman Kra’heera and Tre’valen gave to Elspeth, was as much under siege as the kingdom of Valdemar.

Among the Hawkbrothers, a former mage, Darkwind k’Sheyna, had been fighting his own battle against enemies within and without. Without, were the forces led by the evil Adept and Changemaster, Mornelithe Falconsbane - not the least of which was his half-human daughter, the Change-child Nyara. Within, the Clan was split - physically, for more than half their number, including all of the children and lesser mages, were stranded in the intended site of a new Vale when their Heartstone cracked. And split in leadership, for Darkwind was the leader of a faction that wanted to bring in help from outside to heal their Heartstone and bring back the rest of the Clan - while his father, who led the mages, swore this could not be done.

But Darkwind’s father had been subverted by Falconsbane, and even in the heart of the Vale was still under his control. It was Darkwind’s father, the Adept Starblade k’Sheyna, who had actually
caused
the fracturing of the stone.

Darkwind was aided by a pair of gryphons and their young, who had served as surrogate parents to him when his own mother died and his father turned strange and alien. Treyvan and Hydona did their best to support him, but despite being powerful mages in their own right, there were few in the Vale who would listen to their advice.

Falconsbane elected to close his hand tighter around k’Sheyna Vale, and sent his daughter - under the ruse that she was escaping his power - to seduce young Darkwind. Nyara herself, sick of her father’s mistreatment, was not aware of Falconsbane’s larger plan. Loyalty to his lover Dawnfire kept Darkwind from succumbing to his attraction to Nyara, but by Falconsbane’s reckoning, it was only a matter of time before he had both father and son in his grasp.

Elspeth, bearing an enormously valuable artifact, and a powerful, if untrained mage herself, aroused Falconsbane’s avarice as soon as she came within his reckoning. He turned some of his creatures that had been searching the Plain for the artifacts guarded by the Shin’a’in to pursue Elspeth. And meanwhile, in pursuit himself of an old hatred for gryphons, he launched an attack on Treyvan and Hydona and their young. And in the wake of the attack, he managed to trap Dawnfire’s spirit in the body of her bondbird, and slay her human body along with the spirit of the bird.

On discovering that the young gryphlets had been contaminated by Falconsbane’s power, Nyara confessed her hand in the matter, and was confined in a corner of the gryphon’s lair.

Elspeth, Skif, and the rest arrived at the borders of the k’Sheyna territory, pursued by Falconsbane’s creatures. Darkwind and the gryphons came to their rescue, and recognized both the sword and the Companions for what they were. Unsure of what to do with them, Darkwind led them back to the lair. There, Skif met Nyara and fell in love with her - and the fascination was mutual.

Things that Nyara knew and confessed proved to Darkwind that his father was in thrall to the evil Adept. He succeeded in breaking Falconsbane’s hold on his father and in destroying the creature through which the control had come, but that alerted Falconsbane to the fact that they now knew who and what he was and, presumably, what he had planned. He permitted Dawnfire to overhear that he was planning to meet with Ancar of Hardorn to discuss an alliance - then allowed her “accidental” escape.

The name meant nothing to Dawnfire, but a great deal to the Heralds. This was their worst fear realized; that Ancar should unite with a truly powerful Adept -

But Need, who had centuries of experience recognizing trickery, pointed out that Dawnfire’s “escape” was a little too easy - and that they would be leaving both the gryphlets and possibly even herself unguarded to disrupt a spurious “meeting.”

So the allies planned a reverse ambush; lying in wait for Falconsbane when he came to take the young ones.

Falconsbane was cannier than they thought; he detected the ambush at the last moment, and mounted an effective counterattack. He attempted to take control of the gryphlets, but Need deflected the magic, and turned it against him, using it to purge the unsuspecting young ones of his taint. He attacked Skif, but before he could kill the Herald, he was attacked by his daughter Nyara, in the first open act of defiance in her life. Nevertheless, Falconsbane’s powerful magics and allies succeeded in taking down both Companions and trapping Hydona.

All would have been lost but for the tenacity of Darkwind and the gryphons - and the intervention of the Shin’a’in Swordsworn, the black-clad servants of the Shin’a’in and Tayledras Goddess, who had been secret players in events all along. They surrounded the combatants and forced Falconsbane to a stalemate.

Snarling in rage, the Adept escaped - barely - leaving behind a trail of blood and the survivors’ hope that a Shin’a’in arrow had been fatal.

But the intervention of the Shin’a’in was not complete. The Swordsworn and the two shaman took up Dawnfire - who, trapped in a bird’s body, was fated to fade and “die,” leaving nothing of her human self behind. Before the eyes of the Heralds and the rest, the Goddess herself intervened on Dawnfire’s behalf, transforming her into a shining Avatar in the shape of a vorcel hawk, the symbol of the shamans’ clan, Tale’sedrin.

And in the awed confusion afterward, Nyara vanished, taking Need with her - at the blade’s parting insistence that Nyara required her more than Elspeth did.

But the Clan was united once more, and Darkwind agreed to take up his long-denied powers again, to teach Elspeth the ways of magic, that she might return home an Adept.