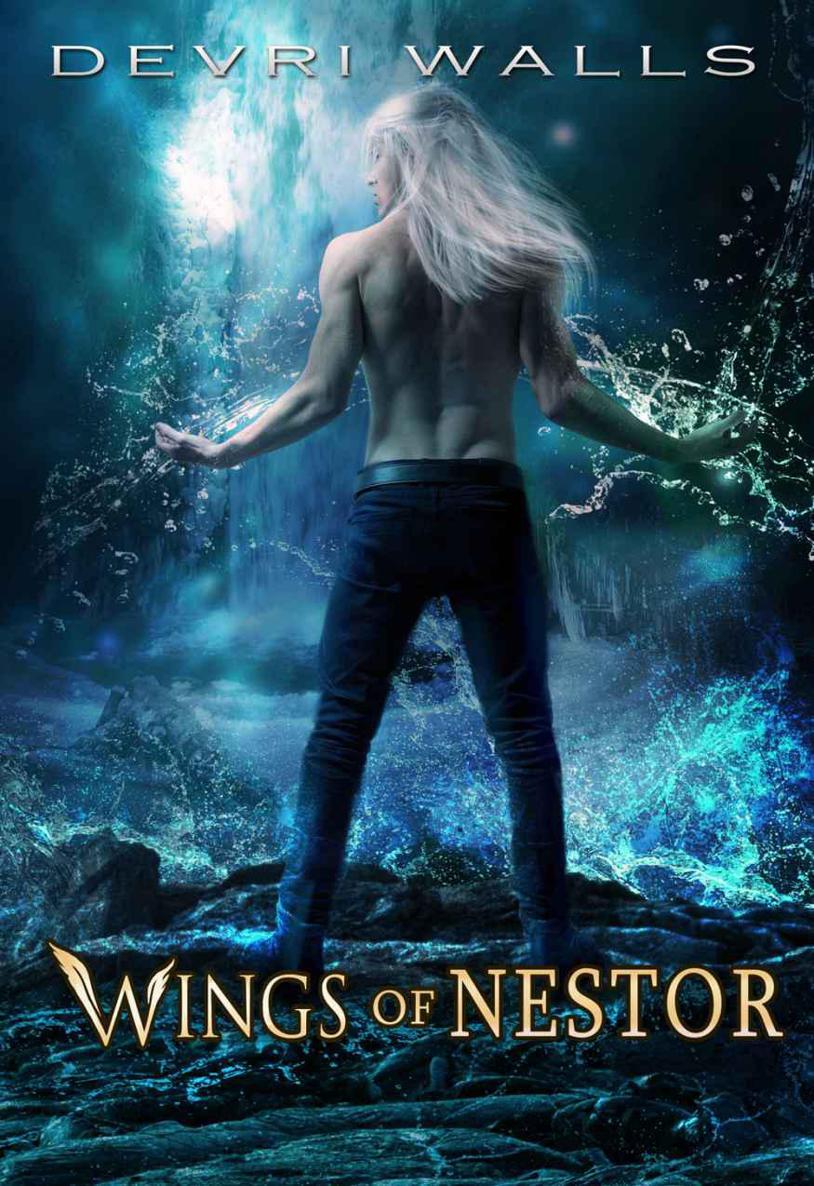 “If you have not yet read
Wings of Arian
....WHAT ARE YOU WAITING FOR? This is a series that is not to be missed by any fantasy/adventure lover! Devri has yet again proved herself to be an amazing writer. Overall this was an amazing sequel to what is so far an amazing series. What I really love about the Solus Series is while the romance does play a big part in the story, I always feel at the end of the book the main focus was on good conquering evil, and THAT is what is important.
Wings of Tavea
is an adventure fantasy that I believe will leave its readers on the edge of their seat and then dying for book three.”

“
Wings of Nestor
is an exciting fantasy adventure with fantastic characters and a fast-paced plot. You don’t want to miss it!

“In
Wings of Tavea
, you will laugh, you will yell, you will cheer, and you will cry—there was this moment when I cursed Devri Walls for breaking my heart as silent tears fell down my face, but most of all you will be taken on a magical journey through unknown worlds with characters you will want to get to know. So if you haven’t already started this fabulous series, then you should do it now!”

“Wings of Tavea
is an equally stunning sequel to
Wings of Arian.
I adore the world the author has created: the characters, the species, the creatures, the places, the prophecy—just everything!” 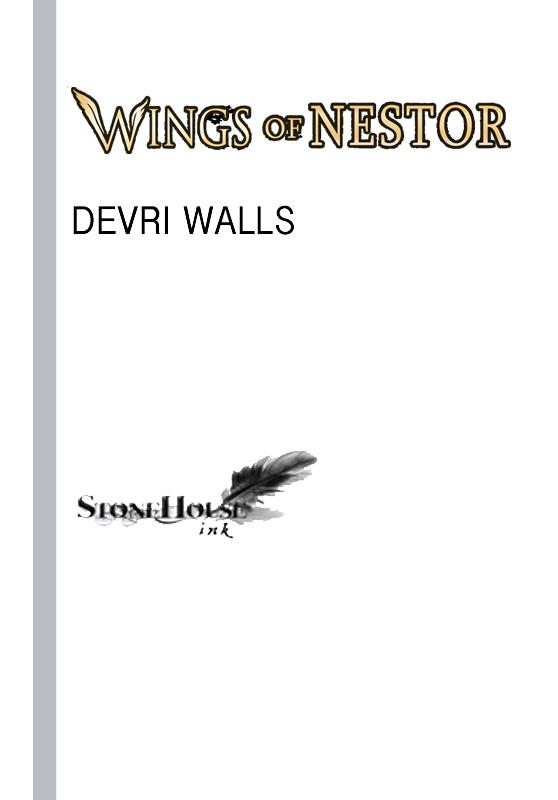 TO MY FAMILY, WHO deals with so much for me to get these books out. For my kids, who said it didn’t bother them that I was working so much and that it was “so cool” I was a writer. To my husband, who makes me laugh, smile, picks me up when I am down, and has taught me the fine art of sarcastic banter to sprinkle into my writing.

To my readers and fans—thank you, thank you, thank you! And in this group a very special thanks needs to go out to Gi J. She is the super fan of all super fans and I am grateful to have her. You know, Gi—I get an alert every time you tag me on Facebook telling someone they simply
must
read my books. I have lost count of how many times that has happened. You have pulled me through self-doubt and questioning without even knowing it.

Ellie—well, we both know where I would be without you. You have forever impacted my writing.

And finally, thank you to Stonehouse for helping me get these books out to the world.

UNDER ALCANDER’S DIRECTION, DRUSTAN turned his course away from the still-burning manor and toward the rocky outcropping poking up from the land. It was the highest point for miles, which, no doubt, was why Alcander chose it.

As they flew, Drustan’s dragon wings beat out a calming rhythm that worked to soothe Kiora’s pounding heart, but she couldn’t help glancing nervously over her shoulder. The black cloud of smoke billowing up from the manor looked so much like the Shadow that her breath hitched for a moment each time she turned, thinking the Shadow had returned. The fact that she couldn’t feel the drain of magic that preceded the Shadow was doing little to ease her nagging fear.

The last few hours had been a blur. They had managed to retrieve Emane and in the process kill two Tavean scouts, Soolan, Dralazar, and Layla. Kiora’s stomach constricted at the memory. Dralazar told her to choose—Layla or Emane. She chose Emane, and now the only burial Layla would receive was beneath the burning manor.

Kiora hadn’t even been allowed to mourn before the Shadow appeared, bearing down on them, swallowing everything in its path. Had she not risked drowning them all, they would be dead. She still didn’t know where that thought had come from, but water had proved to be a very effective shield against the unnatural magic the Shadow possessed. No one should have the power to take others’ magic away.

Emane seemed to sense her pain and tightened his arm around her waist. But how
could
he sense her pain? She had severed their emotional connection, which she still hadn’t told him about. That, and she had to admit she’d kissed Alcander. The urge to scream lodged in her throat.

“Kiora, you didn’t have a choice,” Emane whispered in her ear. “You did what you had to do to get us out of there alive.”

She nodded, swallowing as Alcander glanced back at them, or more specifically, at Emane’s arm wrapped around her waist, which resulted in an immediate stiffening of Alcander’s spine, quiet jealously and irritation apparent. Nervousness melded with guilt into a thick soup that settled in the pit of her stomach as they reached the rocky outcropping.

Anxious for a distraction, Kiora wiggled free of Emane’s hold before jumping off Drustan’s dragon body. She walked around the jagged levels, putting up a border for the encampment, and then started a fire. Drustan had shifted back into human form and was pacing while Emane and Alcander sat awkwardly near the fire.

“What?” Alcander yelled at Drustan. Kiora jumped. Alcander could be harsh and cold, but she’d never heard him yell.

Drustan turned slowly. “What if the Shadow finds us?” he asked. “What if we’re stranded, helpless, on these rocks?”

“How would the Shadow find us?” Emane asked.

“It’s found us twice already,” Drustan answered. “And we barely survived both times. Had Kiora not trusted her instincts with the lake, we would be dead.”

“Before the manor, in the woods. The Shadow might not have come, but those were its followers. Weren’t they, Alcander?”

“Yes.” Alcander’s eyes narrowed as he stared across the valley. “I have no idea how they found us.”

“You’d better shift into what we need,” Kiora said. “We can’t risk being caught unprepared.”

Drustan looked less than pleased. “How am I supposed to know what we need?”

“If the Shadow comes, the only thing we’ll be doing is trying to outrun it. We need something that can carry all of us with as much speed as you can manage.”

Drustan opened his mouth to object but instead conceded the point, although he had to add a complaint. “I hate sleeping in reptile form, especially at night. It’s freezing.” He began to grow and stretch into a modified dragon form. His wings were massive and muscled, his body long and thin with powerful legs. Towering up on his hind legs, Drustan gave one powerful beat with his wings. “If this doesn’t do it, nothing will.”

“There is nothing faster?” Alcander asked.

“Not that can carry all three of you.” Drustan stretched himself out as best he could, but his wing scraped awkwardly against one side of the rock, his tail draping off the other. “It’s going to be a long night.” He dropped his head to the ground with a sigh.

For being so horribly uncomfortable, Drustan fell asleep rather quickly. His chest huffed in a slow, steady pattern, an odd whistling coming from between his dragon teeth. Kiora was relieved to have Emane back and yet, with Alcander here as well, she was so uncomfortable and guilt-ridden that she didn’t want to be near either of them. She summoned some dusty blankets and pillows for everyone from Lomay’s old camp. Ignoring the filth, she lay down, staring into the fire.

When she couldn’t ignore him any longer, she looked up, meeting Emane’s eyes.

Call
, he mouthed to her.

She cringed inwardly, careful not to let Emane see her dread.
How are you?
He frowned.
Better than you. Are you all right? Something seems . . . different.

Tears welled in her eyes. She should have been hugging him and kissing him. He was right—she was different. She had just lost her sister, in the most permanent sense. That grief hovered around the back of her mind, daring her to think about it. Then there was the man lying across from Emane, trying not to look at her, who had a connection with her she could not explain. The guilt from that connection was killing her.

I am hurting,
she said hesitantly
. And I don’t want to hurt you.
She meant that in so many, many ways, and yet Kiora knew Emane would only understand the one.

I’m sorry.
Again, there were so many layers to her apology that he couldn’t see.

It’s not your fault.

The worst possible words he could have chosen. It was, in all actuality, entirely her fault.
I’m glad you’re back,
she forced out.
I missed you.
Pushing herself to her feet, she ran, throwing a bubble up a second before she left the concealment.

KIORA SAT ON ONE of the highest rocks looking over the land. The trees were now an even mix of pine and other varieties. The leaves had turned a spectacular array of color, but it was too dark to see the reds and oranges. Instead, the moon had illuminated the land into varying degrees of blacks, grays, and whites.

Pulling her knees up to her chin, Kiora stared out at her new future. They were so far gone from Meros she couldn’t even see the peaks that marked her home.

The tears were piling up behind her eyes with as much force as the magic that lay coiled beneath her fingertips. Here, alone, and safe for the moment, she finally allowed herself to grieve for Layla. The truth was, all she had ever wanted was her older sister’s love and acceptance. But Layla died still hating her and siding with Dralazar.

What hurt the most were Dralazar’s words after he forced her to choose between Layla and Emane. “
I can’t say I am surprised
,” he had sneered.
“And I doubt Layla was, either.”

Kiora shook her head, blinking furiously. She swiped at the tears that slid down her cheeks. It was true, what she told Emane—she had lost her sister a long time ago. But it didn’t make it easier.

She winced at the memory of Dralazar clawing helplessly at the wood protruding from his stomach, trying to heal himself. But the Shadow had already taken so much magic that he didn’t have enough left to save his own life. She squeezed her eyes tight, but the memory was in her mind and a mere closing of her eyes did not stop the pictures.

She did what had to be done. And there would be more, much more, before this was over. Malena had tried to tell her. Arturo had forced understanding on her. She understood why death was necessary, so why didn’t understanding make it easier? Taking a shuddering breath, Kiora looked up, allowing the beauty of the stars to act as a distracting balm for her pain.

It looked like home. The sky, the stars, the moon. Lying back, she put her hands behind her head and pretended she was in Meros. A smile ghosted across her lips, remembering her mother’s lingering kiss on her forehead as she tucked her into bed. It was a memory so faint, it fluttered on butterfly wings before slipping away.

She lay there for some time, but as the night grew colder she decided to return to camp, hoping Emane and Alcander were already asleep. She trudged through the enclosure, silently tucking herself under blankets before dropping her bubble. She could tell by Emane’s breathing that he was asleep. Alcander, however, wasn’t.

She bit her lip. She’d had a question since Drustan explained how Tavean bonding worked. Alcander had bonded with her, and he would never bond with another. If Kiora chose Emane, Alcander would be alone forever.

“Why didn’t you tell me?” she finally whispered.

“About what?” he replied softly.

Kiora squeezed her eyes shut, bunching the filthy blanket in her fist.

Alcander sighed “I didn’t want you to know.”