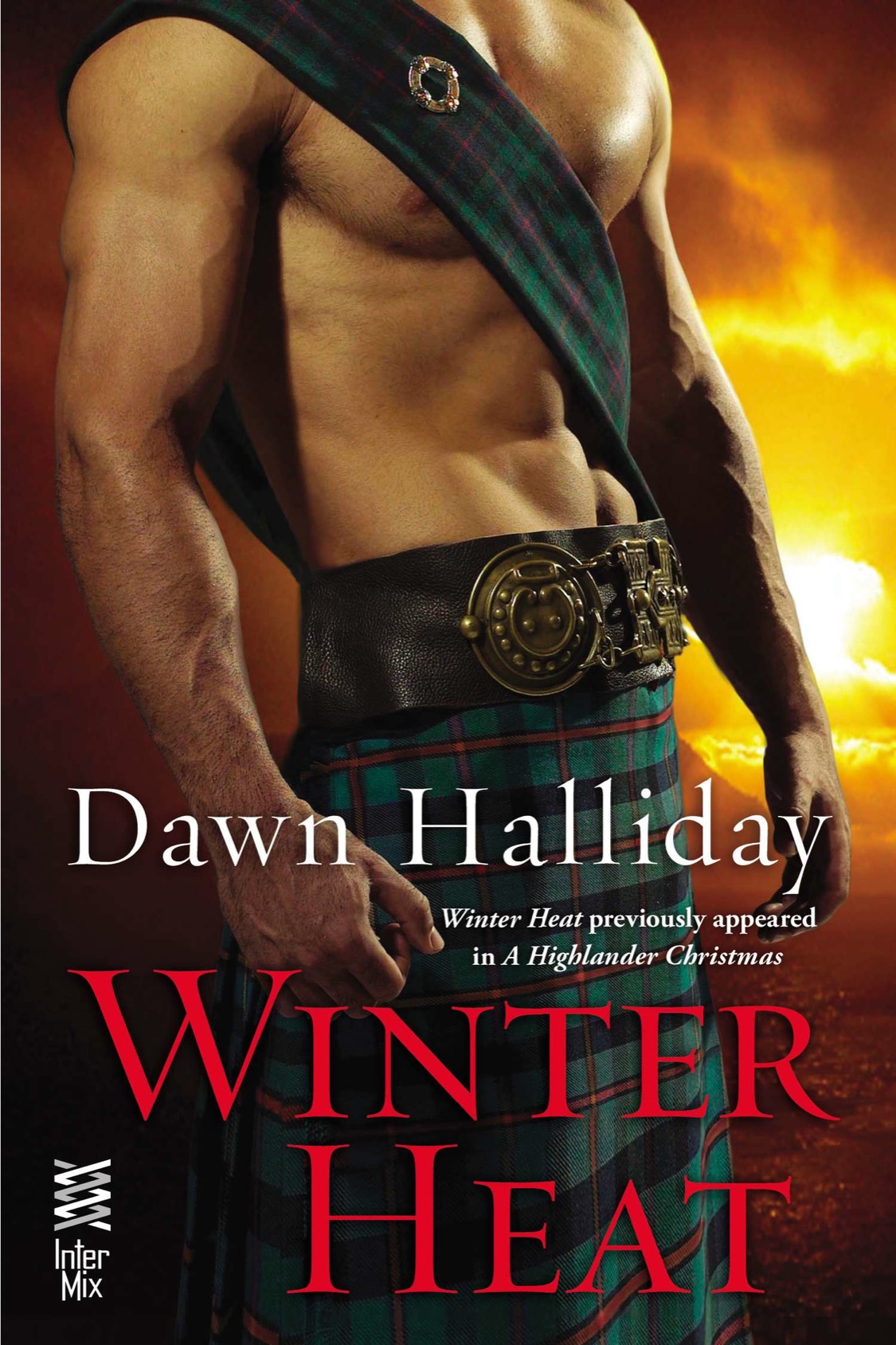 “Winter Heat” appeared in the anthology
A Highlander Christmas
.

InterMix Books are published by The Berkley Publishing Group

Chapter One
DECEMBER 1715 SCOTTISH HIGHLANDS
Atiny bud of hope bloomed within Maggie MacDonald as she peered out the frosty pane of her window. A storm approached—the air was thick, heavy with the promise of snow. Meager light from inside the cottage dappled the gray graveled path leading toward the village road. Fog wisped lazily above the ground, and the clouds hovered low enough to caress the thatched eaves.
Perhaps Innes Munroe would leave her alone until the storm passed. Perhaps Innes would spend the next ten days sotted, the drink would wipe his wish to claim her from his memory, and the New Year would dawn with new hope for Maggie’s independence.
A pretty dream. It’d take a cudgel to the skull to make Innes forget his intentions when it came to her.
A puff of cold air brushed Maggie’s face, and she closed the curtain against the chill that swept through her. Pulling a plaid tight across her chest, she knelt to tug on a second pair of stockings.
Beyond the partition dividing the cottage into two rooms, one of the servants moaned softly in her sleep. It was late, and tomorrow would be a long day, for they’d planned to make the three-m ile journey to her cousin Torean’s castle for her annual fortnight-l ong visit. Every December, the MacDonald laird summoned family members to his castle, where they observed Christmas prior to the raucous revelry leading up to Hogmanay and the New Year.
This year Maggie thought the festivities might be muted, for the recent uprising against the Hanoverian King hadn’t proved to be the great success they’d all anticipated. Yet the MacDonalds of Beauly had lost none of their men in the Battle of Preston, and that in itself was a cause for celebration.
Maggie snuffed out the two oil lamps and returned to her bed. Leaving her plaid wrapped around her body and pinned at her shoulder for additional warmth, she slipped beneath the heavy wool blankets, shivering.

Crack!
The sound of splintering wood jolted through the cottage, jerking Maggie awake. She bolted upright, but before she could decipher what had happened, a big masculine hand clamped over her face.
Every muscle in Maggie’s body went stiff. The taste of mud washed over her tongue. She bared her teeth and bit down hard on the thick flesh padding the man’s palm. Snarling a curse, he released her mouth, and Maggie let out a pealing scream.
The intruder bent over her, a looming black shadow with yellow-h ued teeth gleaming in the dimness, and hefted her from the bed.
“You don’t wish to make this easy for me, do you? ” he spat into her ear.
Maggie recognized the voice instantly, for it belonged to Innes Munroe. His familiar oniony smell overlaid with the essence of whisky washed over her, and the greasy ends of his pale hair brushed over her cheeks.
“Damn y—”
He dropped her lower body, and again his hand clapped over her lips, filling her mouth and nose with the coppery taste and scent of blood.
“I’ve waited too long, Maggie MacDonald. My patience is at an end. You’re coming with me.”
Something sharp prodded her between her collarbones. Maggie glanced down at the glinting blade of a dagger, its point probing her flesh.
“Dare to bite me again, and I’ll sink it deep, I promise you,” Innes growled.
She realized he’d already pulled her halfway to the gaping doorway. He’d splintered her door and pulled it from its hinges, and its remnants lay on the snow just beyond the henchman who loomed at the threshold, leering at her. He gripped his sword hilt, ready to impale anyone who attempted to hinder his master.
“Ah, what have we here?”
Maggie followed Innis’s gaze to see her three servants hesitating at the partition opening. Her man-of-a ll-work, Naughton Campbell, stood in front of his daughters, who stared from each side of his body at Innes and Maggie with wide, terrified eyes.
The blade at her neck pressed deeper, breaking her skin, and Maggie gasped. Tears collected behind her eyes, but she refused to cry, refused to give Innes the satisfaction of even a whimper.
“Come one step closer, and I’ll kill her.” Innes’s voice, as always, was a harsh rasp, like the words had been dragged over hot coals before emerging from his mouth.
He shifted, and Maggie found her arm, which had been pinned between her body and Innes’s, was now free to move. Her hand shot up to grip his wrist. With all her might, she tried to yank the dagger away from her tender skin.
She couldn’t budge him. He was too burly, too strong, his strength heightened by drink and determination. He jerked her another step backward, tugging her toward the cold outside air.
“Ma’am?” Naughton asked, his question a low rumble. Fear clouded his eyes as his gaze darted from Maggie and Innes to the man standing at the threshold. Maggie didn’t blame him. Innes alone was younger and stronger than Naughton, and twice his size.
“Stay put, all of you,” she ordered. It would only cause more bloodshed were Naughton to put himself at risk.
She sucked in a breath, and in an abrupt move, she twisted in Innes’s arms to free herself from his iron grip. The action did nothing but drive his blade deeper. A trickle of blood flowed down her chest and collided with the edge of her shift.
“Oh, ma’am!” Lizzy, the younger of the two girls, began to cry. Naughton held his arms out to block the girls, ensuring they remained at a safe distance.
Closing her eyes, feeling nothing but the sharp sting on her neck, Maggie stilled. She must save her strength—attack Innes and run when he least expected it.
With his arm like a band of steel clamped around her middle, Innes dragged her backward. He hesitated at the threshold, pausing to sneer at Naughton and the girls. “Good night, then.”
Maggie braced herself against the chill as he yanked her into the night air.

Logan Douglas hadn’t yet found shelter for the night. Locked in nightmarish memories of the battle at Sheriffmuir, he’d lost track of time and simply kept going on his endless march north as the gloom of dusk darkened into a velvety night. When cold flakes of snow began to drift into his eyes, he snapped back to himself. He stopped in his tracks; took in his surroundings.
“Hell,” he muttered.
This far north, the towns were scattered few and far between, and though villagers brought their animals up to graze in the summer months, these mountains were virtually uninhabited at this time of year.
ADS
15.4Mb size Format: txt, pdf, ePub

The Girl by the River by Sheila Jeffries
FRAGILE: Part 1 by Kimberly Malone
Epidemic of the Undead: A Zombie Novel by P. A. Douglas
Fury to the Stars (Universe in Flames Book 2) by Christian Kallias
JENNY GOES HOLLYWOOD by Madison Langston
Mystic by Jason Denzel
Bloodstone by Johannes, Helen C.
The Courtesan's Wager by Claudia Dain
Out to Lunch by Stacey Ballis
Unlimited: How to Build an Exceptional Life by Jillian Michaels
Our partner