Winter's Fury - Volume Two of The Saga of the Twelves 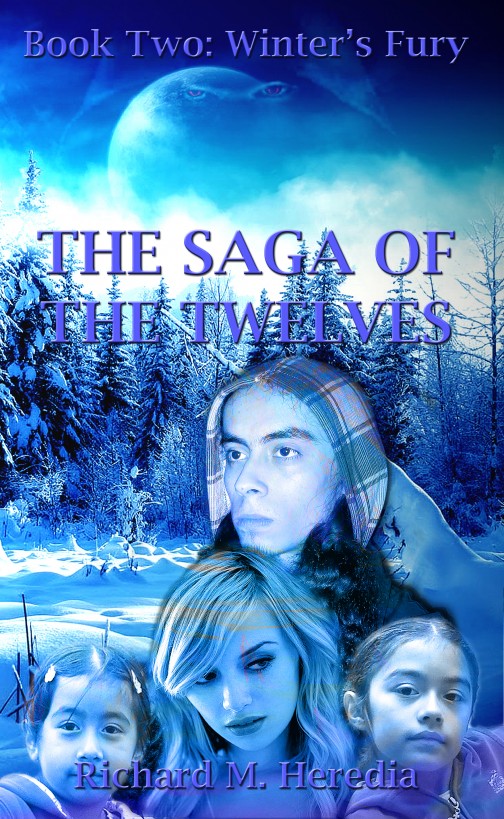 THE SAGA OF
THE TWELVES

This book is licensed for
your personal enjoyment. This book may not be re-sold. This book is
a work of fiction. Names, characters, places and incidents are
products of the author’s imagination or are used factiously. Any
resemblances to actual events or locales or persons, living or
dead, are entirely coincidental.

All rights reserved,
including the right to reproduce this book, or portions thereof, in
any form. No part of this text may be reproduced, transmitted,
downloaded, reverse engineered, or stored in or introduced into any
information storage and retrieval system, in any form or by any
means, whether electronic or mechanical without the express written
permission of the author.

Visit the author online
and pen a quick review at:

Visit the author
at:

The Saga of the
Twelves:

The Birth of
Bane

For Maira and
Emma

Once more, my most humble
thanks to my Creative Team who stood behind me, month after month,
as I toiled through the massive project that became the first three
volumes of this work. Although, I did struggle through most of the
summer months of 2011 (and again in 2014, during the rewrite), the
three of you kept at me, encouraging me, prodding me to continue
with The Twelves. I am glad you guys convinced me to revisit the
story, urged me to tell it correctly. I never would have kept my
head to the grindstone, my focus on the straight and narrow if it
had not been for you. Michelle, Elissa and Antonio – you are, and
always will be, the heart and soul of this tale.

Thanks to my wife, Maira
Ayala, for being in my corner, for being my cheerleader and keeping
my excitement level just high enough, so I was able to overlook or
ignore all of the negative “stuff” that sometimes life throws at
you, whether you deserve it or not. You were always there to listen
and to offer clarification whenever I had a breakthrough or when I
was going out of my mind trying to find out what the voice inside
my brain was saying. You were my smile when I had a headache. You
were my hug from behind when I was stuck and needed a break. You
were my kiss whenever I wondered if I was mentally tough enough to
finish what I started. You were my pot of coffee when I was too
tired to work. Thank you, my love!

Thanks to Johanna
Velasquez for always being my Cornerstone of Positivity, for never
doubting that this project would prove fruitful. You never let an
opportunity slip by, no matter how busy or tired you might have
been. You always had an “I am so proud of you” or a “you can do
this” for me to read, whether it was a text or an e-mail or a
Facebook message. I owe you so much, comadré. More than you
know.

Thanks to my mom, my
siblings, my cousins, my extended family members and close friends,
who were consistently there to give me a boost or just say simply,
“Dude, I cannot believe you are writing a book!”

Lastly, a special thanks
to Emma Lorraine Heredia. Though it will be many years before you
will be able to read this, I want you to know that
way
back in time, at the
end of 2011 and the beginning of 2012, there was no one on earth
who could have given me more of a sense of urgency than you did.
You instilled within me a drive unlike anything I have ever
experienced. In truth, I could not have finished the first versions
of The Twelves, if I had not known that you would soon be in here
in the world. Your birth has been a blessing to me on more levels
than you could imagine. What you have done for me is simply…God
given. Your imminent arrival forced me to take my writing
seriously, to approach it in the same fashion I had when I was
working for Fortune 500 companies, unhappy, but killing myself all
the same. I learned so much because of you. How can I ever repay
you? Thank you, my little Chomp-Chomp!

It had been a thing he had
done hundreds of times in the past, whether he was training or
doing so just to clear his mind. It was comforting. He welcomed the
exertion. He enjoyed the pumping of his legs, the rhythmic beating
of his heart in concert with the steady labor of his lungs. He
could go for almost an hour now, his mind blank as his body went
through the repetitive motion required of long distance running. In
the past, he would have been content. In the past, he would have
been at peace. These days though, he was far removed from any such
level-minded mental state.

Today, the routine of his
run failed him on more levels than he cared to recognize. His mind
tumbled about, entirely incapable of reaching any sort of
equilibrium. Jogging should have filled him with a degree of
solace. It always had in the past. But then, things had been
different for quite some time now.

He had passed the Hidden
Cove Golf Course some time ago, striding through the dried riverbed
adjacent to the property. He was north of I-40, the main
transportation artery skirting through the sleepy town of Holbrook,
Arizona. He had passed the sharp bend, heading west, and the lazy,
angled turn pointing him back to the north. He was heading toward
the fork in the shriveled watercourse, his thoughts still dancing
with visions of her.

Why do I have to miss her
so much?

His name was Ricardo
Charone. He was a sixteen, a Hispanic teenager of medium height,
rail-straight. He had dark brown, shoulder-length hair and eyes to
match. His face was broad, but kind, though now it appeared more
pained than anything else. He was broad-shouldered and thin-hipped
with the lithe form befitting a boy who had run for many years. He
might not look it, but he was strong. Years of intense
speed-lifting and Cardio workouts would do that to just about
anyone. In that sense, Ricardo was special. He was a great
runner.

He wore a loose-fitting,
tank-top and shorts ensemble with coordinating Nike Racers on his
feet. It was his High School Track Team’s training outfit. The
secondary set he had. He was only supposed to wear it when he
worked out with the team, but he could have given two shits about
all that bull. He had more important things to contemplate than the
light admonishment he’d get from Coach Calhoun, if he got caught.
He was, after all, the Middle Distance Prodigy out of Holbrook for
Christ sake. No one would begrudge what he wore. All they would
care about is whether or not he continued to win on the
track.

He harrumphed
disdainfully. For the first time in his life, running did not seem
all that important. Not now, possibly not ever. Something else had
rearranged his priorities, something he could not shake no matter
how hard he tried.

He was pining after the
only girl who had meant more to him than a means for a good
make-out session or a quick feel in the dark.
Marianna White-Horse.
Her name was
branded onto his brain. She branded into his heart, stirring more
emotion than all the times he’d crossed the finish line in first
place
combined
.
Just her name could invoke a slew of feeling, the entire gambit as
far as he was concerned. She made him sorrowful, angry,
downtrodden, depressed, envious and even grateful – the list went
on and on. Yet, he felt them all equally and at the same time. They
were deep-seeded now, entrenched in the very fabric comprising the
weft and weave of him. He could not remember what things had been
like before she’d been in his life. His mind would not let him.
Everything else was not as critical. All else was not
her.

There really had not been
all that much between us
, he tried to
convince himself, over and over, time and time again. But, it was
of no use. It was a wasted electrical pulse, an automatic reaction,
a defense mechanism.
Whatever the fuck you
want to call it!
After a few moments, the
falseness of it rang true. It was less than conjecture. It was a
simple lie.

There
had
been much between them. There
had been a lot. Sure, they had only made-out a few times, each
session more desperate than the last. The news of her eminent
departure had made them kiss frantically, had made them flail at
one another recklessly. There had already been too much heartache,
too much hurt filling their breasts for it to be any other way.
Yet, there had been something growing between the two of them for
quite some time. It was not physical, though he had thoroughly
enjoyed having her in his arms. It was more. It was…

He shook his head from
side to side, a tactile attempt at banishing his thoughts. It
forced him to focus on the landscape about him. He was running at
the center of the riverbed - a somewhat broad expanse, shallow and
bordered by steep, four-foot embankments on either side. Other than
sparse chaparral, sage brush and other like flora common to the
high desert, there was little else around. Maybe the odd Joshua
tree or Velvet Mesquite grew about, but he could not see any from
his position. The wind was steady, coming off the San Francisco
Peaks some miles to the west, towering above the environs of
Flagstaff. It was cool, refreshing, not the biting iciness it would
be in the coming weeks with the onset of winter.

Although, now that he
thought about it, it was cooler now than it had been last year at
the same point on the calendar.

Save Yourself by Kelly Braffet
Fire Always Burns by Krista Lakes
Mystic and Rider (Twelve Houses) by Shinn, Sharon
Universe Online - Enter the Game: Complete Edition by Ryan 'Viken' Henning
Once Within A Lifetime by Rose, Phyllis Georgina
Naked in Knightsbridge by Schmidt, Nicky
9781631052347OnCallKenyan by M. O. Kenyan
Dragon's Heart by Jane Yolen
Cause Celeb by Helen Fielding
Under His Skin by Piaget, Emeline
Our partner