Read Wish Upon a Star Online

Wish Upon a Star 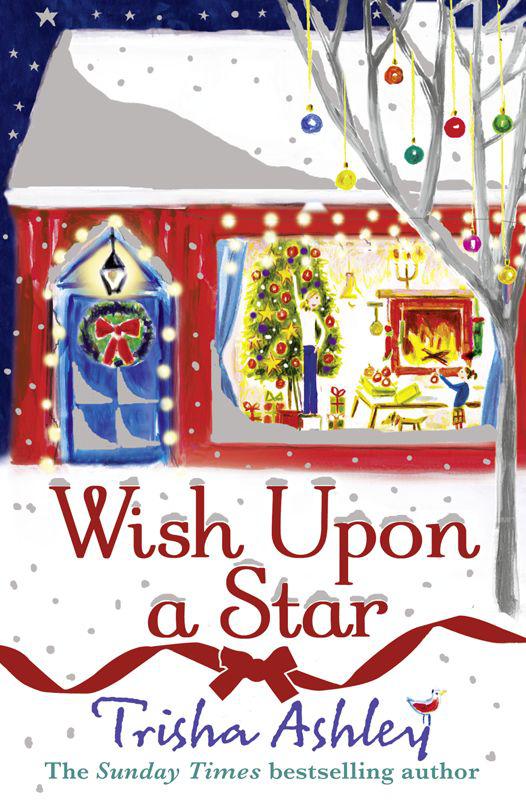 TRISHA ASHLEY
Wish Upon A Star

This book is dedicated to all my wonderful readers – my stars to steer by.

Prologue: 2001, The Return of the Native

Chapter 1: A Star is Born

Chapter 7: The Cult of Perfection

Chapter 15: What the Dickens?

Chapter 19: Gone, but Not Forgotten

Chapter 20: The Proof of the Pudding

Chapter 21: Is There Honey Still for Tea?

Chapter 31: Cooking Up a Storm

Chapter 34: Babes in the Wood

Chapter 39: To Infinity and Beyond

Prologue: 2001, The Return of the Native

It was early evening in the village of Sticklepond and the bar of the Falling Star was almost empty, apart from a couple of locals who’d dropped in on their way home from work, and the shoe salesman in the corner who had booked a room for the night and was now studying racing form in the paper as if his life depended on it.

As Florrie Snowball slapped a hot, limp, microwaved sausage roll and a pint of Middlemoss Brown Ale in front of Pete Ormerod, who farmed up by the edge of the Winter’s End estate, she said, ‘I hear there’s an Almond moved back into the village.’

‘That’s right,’ he agreed, poking the middle of the sausage roll with the end of a gnarled finger as if unsure what might pop out. ‘News gets around fast.’

‘Someone saw her – there’s no mistaking an Almond, and anyway, we’ve seen Martha come and go over the years, right up till her mother died, haven’t we? Not that she didn’t keep herself to herself, just like her parents did.’

‘They had cause enough, didn’t they?’

‘I’m not one to think the sins of the fathers should be visited on the children, poor innocent mites, and only us old ones remember the whole story now,’ Florrie snapped. ‘And anyway, Martha’s parents were no more than cousins, so it wasn’t really anything to do with them.’

‘They still felt the shame, though,’ Pete Ormerod said heavily, ‘and went off to Australia with the rest of the family, even if they were back within the year.’

‘Well, you did all right out of it, didn’t you?’ she pointed out tartly. ‘Buying Badger’s Bolt farm gave you twice as much land and they were in such a hurry to get away, I bet you paid less than it was worth.’

‘It was enough to buy them a sheep holding in Australia and that’s what they wanted – though the sheep were what Jacob couldn’t abide. But there was never a better cattle man than Jacob Almond and I was more than glad to give him his old job and cottage back.’

‘I always thought the whole clan of them upping sticks and emigrating was a bit of an over-reaction myself,’ Florrie said. ‘Came of them being Strange Baptists from that chapel that was over in Ormskirk, I expect. The young ones these days’d think nothing of what happened – they see worse on the soaps every night. So now Martha’s back living in the very same cottage she grew up in, it’s surely time to forgive and forget.’

‘Not
exactly
the same cottage,’ Pete said through a mouthful of sausage roll, ‘the last people who had it built a big garden room at the back with a bedroom over it and tarted the place up no end.’

‘Well, you should know, you were the one who sold it off to them in the first place. And it’s just as well it’s been done up, because it was no more than a hovel before, and after being married to that London doctor Martha must be used to something different – and come to think of it, she’s not an Almond now, she’s Martha Weston.’

‘She’ll always be an Almond as far as some of us are concerned, there’s no getting away from it,’ Pete said, shaking his head, and seeing he was set in that conviction she said no more, though she did severely admonish him for having the bad manners to talk with his mouth full, before leaving him to the rest of his sausage roll and pint.

It had been sheer serendipity that the house where she was born should have come up for sale just as Martha Weston had started her search for a new home. Now, unpacking books in the almost unrecognisable cottage, she neither knew nor cared whether the locals were talking about her or not – she was just glad to be back where she felt she belonged.

Although she didn’t know all the ins and outs of it, Martha was well aware that one of her relatives had somehow blotted his copybook and been expunged from the family records in the dim and distant past (‘Never mention Uncle Esau to your father,’ her mother had always said), an event that had precipitated the entire Almond clan taking flight like a flock of startled birds.

She barely remembered Australia, except that it had been hot and smelled of sheep, but her parents had been even more insular on their return and she became a solitary child, happy in her own company, who could often be seen sketching in the countryside.

She’d gone to grammar school in Merchester and then, after being taken up and encouraged by Ottie Winter from the big house (who was even then getting a name for her sculptures), went off to art school in London.

Marrying a doctor and staying there hadn’t been any part of her plans, but love plays tricks on us all. Still, as soon as his death released her, she had flown like a homing pigeon back to the village where she was born.

She belonged in Sticklepond, but since both nature and nurture had made her solitary she often walked in the gloom of the evening when few were about and did most of her shopping in the nearest town instead of the village.

But strangely and without her being aware of doing it, whenever her way took her past the war memorial on the green, she would avert her eyes and quicken her step, just as her mother had always done.

Chapter 1: A Star is Born

While the consultant was explaining the complexities of my baby’s heart condition to me in a hushed, confidential tone, I stared fixedly at his yellow and red-spotted bow tie, half expecting it suddenly to spin round like a joke one: that’s how spaced-out with fear, anaesthetic and shock I was after my emergency Caesarean.

I don’t know why he bothered to lower his voice anyway, since I’d been shunted off into a room of my own … or maybe that should be a
store cupboard
of my own, because it was a tiny slice of space with one high window and a wall lined with boxes of equipment. They were probably as surplus to requirements as I seemed to be, now that my baby was sustained by the resources of the intensive care baby unit instead of my own.

‘Can I see her?’ I interrupted.

Ma, whose ample frame was squeezed into a tubular metal chair on the other side of the bed, with her elbow resting on a pile of cardboard cartons, said, ‘She can’t come up here, Cally, when she’s in an incubator attached to all those bleeping things, and you certainly aren’t up to going down there yet. But she’s perfect – hands like tiny pale pink starfish.’

‘You said she was so blue she looked like a Smurf,’ I said accusingly, tears welling.

‘I thought you were still asleep when I was talking to that nurse, and anyway, it was just a glance in passing right after she was born. She looks pink now.’

‘She
was
a little blue at first, but now she’s stabilised and a relatively healthy colour,’ the consultant said soothingly. ‘You will be taken down in a wheelchair to see her as soon as you are recovered enough.’

‘She is going to be all right, isn’t she?’ I pleaded. ‘Only there was an angel hanging around when I woke up and I thought it might have come for her.’

‘That was a nun,’ Ma said. ‘She had a white habit on and flapped past the trolley when you were being wheeled out of theatre. Thought she looked more like an albatross, myself.’

‘Why would a nun be on a maternity ward?’ I asked.

‘I don’t know, but it’s a damned sight more likely than an angel.’

I focused on the consultant again and he looked back at me and frowned. ‘Your baby’s heart problems should really have been picked up on a scan …’ He paused and then added with false brightness, ‘Still, there is
one
good thing.’

‘There is?’ Ma asked incredulously.

‘Yes, the majority of female babies with similar malformations also have Turner’s syndrome, which can lead to other side effects, but your baby doesn’t.’

‘Thank heaven for small mercies, then,’ my mother said drily, without removing the jade cigarette holder that was clenched between her teeth. Having tired of repeating to hospital staff that she’d no intention of lighting up inside the premises, she’d removed the pink Sobranie from it and placed it carefully in a silver case in her vast red Radley handbag. The consultant eyed the empty holder in much the same way I’d been looking at his bow tie, and then his gaze moved to the colourful splashes of oil paint on the legs of her black slacks and across her tunic where her bosom tended to rest on her palette while she painted. She looked like a walking embodiment of Jackson Pollock’s Dark Period – if he’d had one.

Still, it was a measure of her love that she’d rushed down on the first train once my friend Celia had called her, despite her oft-repeated statement that she never wanted to set foot in London again.

‘Never mind Pollock: this is
my
dark period,’ I muttered.

‘I think our Cally’s a bit delirious,’ she said, laying one small, cool, plump hand on my forehead. ‘Though she often talks daft.’

‘I’m not – and I understand about Stella needing an operation right away. Will she be all right afterwards?’

‘She certainly won’t survive if we
don’t
operate,’ the consultant said evasively, still in that low, confidential voice. ‘She’s not quite full term and of course there are always risks involved in operating on such small babies. But you do understand that her long-term outlook is at present obscure, don’t you? She will definitely need more treatment later, possibly including further operations.’

‘There seems no option but to agree to this operation,’ Ma said, shifting the jade holder to one side of her mouth. ‘It will give her a fighting chance, at least.’

Justice Served: A Barkley and Parker Thriller by Flowers, R. Barri
The Voice by Anne Bishop
Dead To Me by Cath Staincliffe
Destiny Forgiven (Shadows of Destiny) by Shaw, Leia
Poppy's Picnic (Poppy's Place Short) by Beck, Stephanie
Goodnight Mister Tom by Michelle Magorian
Darkness Dawns by Dianne Duvall
No Time to Cry by Lurlene McDaniel
Dead in the Water by Woolland, Brian
Dorothy Garlock by A Place Called Rainwater
Our partner