Read With This Ring Online 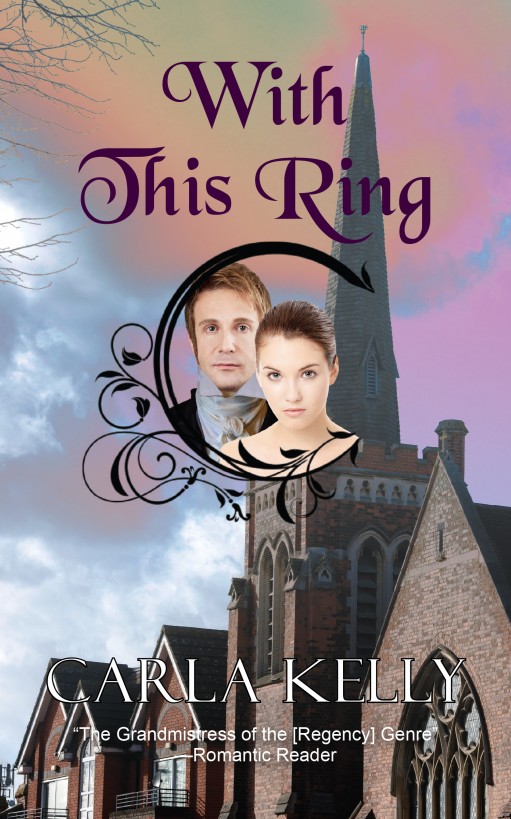 With This Ring
Carla Kelly

For more information go to:
www.camelpress.com

All rights reserved. No part of this
book may be reproduced or transmitted in any form or by any means,
electronic or mechanical, including photocopying, recording, or any
information storage and retrieval system, without permission in
writing from the publisher.

This is a work of fiction. Names,
characters, places, brands, media, and incidents are either the
product of the author’s imagination or are used
fictitiously.

First published by Signet, an
imprint of Dutton Signet, a division of Penguin Books USA
Inc.

To Denise and Tisha
Grayson,

“
With this ring I thee wed, and with
all my worldly goods I thee endow.”

—
The Book of Common
Prayer

G
eneral
Thomas Picton, who found his way into this narrative, was a
prominent officer who served ably as one of Sir Arthur Wellesley’s
lieutenants during the Peninsular War (1808-1814). With his brother
officers—Crauford, Beresford, Pakenham, Hill, and Ponsonby—General
Picton fought the length and breadth of Portugal and Spain in the
struggle that ended with the Victory of Toulouse and Napoleon’s
exile to Elba in 1814. Picton was brilliant, eccentric, and
well-known for his breathtaking profanity in a profane army. No
sight was more familiar than General Picton at the head of his
beloved Third Division, wearing his famous broad-brimmed top hat
(he suffered from eye strain).

Picton’s errors in the fog of battle
that was Toulouse in no way diminished his abilities and talents.
He went into battle a year later at Mont St. Jean, and was killed
instantly by a bullet through his top hat during the long afternoon
that was Waterloo, June 18, 1815.

General Picton plays only a small
role in my story. I hope I have done him the justice he deserves.
The liberties I have taken with him are those of an
admirer.

“
P
ercy, do
you know what I like best about Englishwomen?” Major Sam Reed held
his hand over his bishop, then moved it three squares. The lady
chapel was cold, so he tugged his overcoat higher around his
shoulders, wincing at the pain.

“
God save us, Sam, but after all
these years, you are still a terrible player.” Lieutenant Percy
Wilkins moved his knight and eliminated Reed’s bishop with one
swipe. “Check. No, tell me what is so fine about Englishwomen. It
has been too many years. And for the Lord’s sake, hold still. If
you open that wound again, I’m not going to feel even a little
sorry for you, sir.”

Reed knew he didn’t mean it, because
his second-in-command got off his cot and peered under the
overcoat. Apparently satisfied, Sir Percy resumed his position on
his major’s cot. “As for me, Sam, I have not seen an Englishwoman
in so long that I wouldn’t recognize one if she bit me on the
buttock.”

“
You wish.” Sam contemplated his
bishop on Sir Percy’s side of the board, not so much of a board as
a campaign tablecloth blocked and stained red and black. “I like
the way women here smell, like tea cakes or sugared violets.” He
gestured with the silver thimble that served as a rook. “Look you
now: they go up and down the rows, dispensing a sip of water here,
a pat on the head there. They look like they smell good, think on.
D’ye think they will come to us?” He moved his rook out a
square.

Sir Percy looked in the direction
Sam indicated, turned back to the board, and moved his queen.
“Check and mate. They won’t come over here because we look too
able.” He lowered his voice. “Now, if you would lie back and gasp a
little like this poor captain next to you, and maybe grab your
belly …. Belly wounds are good. They’ll be at your side in a
wink.” He grinned. “And gone about as fast.”

Sam sighed and gathered up the chess
pieces. He knotted them in one corner of the tablecloth and leaned
back against the wall. “I do not need Society ladies to feel sorry
for me.”

“
Actually, sir, I believe you do.
Surely you cannot have forgotten your predicament?”

Sam glared at his lieutenant. “How
could I?”

“
Indeed you could not,” Sir Percy
agreed, his serenity an added irritation to Sam. “You need a wife
in the worst way.” He nodded in the direction of the ladies. “Maybe
these sightseers might know of a woman ….”

The major interrupted him. “She has
to be a lady. That’s one of the terms.”

“
I
know
the terms,” Sir Percy
reminded him. He sniffed the air around Sam. “More to the point
now, you need to locate a lady with no sense of smell, who is
impervious to rude noises, and who wouldn’t mind a man who looks
like a troll afraid of a barber.”

“
I can bathe, and I can shave, and
when my back heals, I can stand up straight!” Sam said with some
energy. And I am being testy toward the one who has done so much
for me, he thought. Whether for good or bad, who can tell? Careful
not to move fast, he held out his hand to his lieutenant. “Percy, I
have never adequately thanked you for writing all those letters to
my mother. What a lovely wife you gave me through those
letters.”

Percy laughed and shook Sam’s hand.
“I enjoyed it! Only think how my penmanship improved, and how it
broke the whole battery’s tedium.” His face grew serious again. “I
only hope I have not overdone the matter. Your mama is expecting
you to arrive with a paragon of virtuous, lovely womanhood. And of
course, there is that other matter.” He paused, and Sam sighed.
“Don’t know what I was thinking, sir. Call it poetic
license.”

“
Ah, yes, the other matter.” Sam
started to speak, thought better of it, then waited until he was
calm. “Well, Percy, don’t let me keep you. I know that your mama is
eager to see your sorry self again.”

His lieutenant got up from his cot
and stood looking at him for a long moment. “I’ll miss the guns,
sir. Do stop at Quavers on your way north.” Sir Percy grinned.
“With a wife.”

Through the portal that opened onto
the larger chapel, Sam watched his lieutenant leave. He smiled when
Percy stopped by the cots of their men, those stalwarts of the
battery wounded in the last battle at Toulouse that sent Napoleon
to a change of address to Elba. You’ve learned, lad, he thought,
remembering Lieutenant Sir Percy Wilkin’s arrival two years ago
before Badajoz—a baptism I would wish on no greeny, he thought
fervently, and not for the first time. There was a time when these
heroes were objects of the lower class, eh, Percy? he reflected as
his lieutenant spent a long time before the cot of their master
sergeant. And then when your sergeant saves your aristocratic but
inexperienced hide from one or two gross errors that artillerymen
don’t want to make—ah, it’s a different story.

He leaned back against the wall
again, careful of himself, and thought about his own sergeant,
blown into froth at Talavera, and the corporals and privates whose
names had faded, if not the remembrance of their gallantry under
fire. He tried to lean against the wound, winced, and thought
better of it. If I am to be invalided home, I had better heal
quickly, he thought. This church is already becoming tiresome
indeed, and Lord knows I have some heavy ground to get over
lightly, as Old Nosey would say.

Face it, Sam, he told himself. You
hate to ruin your record of no wounds at all during this whole
long, dreadful war. It’s rough to peacock about when you’re hard
put to stand up straight. At least your knuckles do not drag on the
ground. The major drew up his knees and leaned forward on them,
finding some measure of relief in that position. It was a comfort
to know that the war was over.

Except. He rested in his chin on his
knees and watched the ladies moving slowly up and down the ranks of
the wounded, sequestered here in this drafty London church, chilly
inside while May’s hawthorn bloomed outside. “I need one of those
in just about the worst way,” he said out loud.

“
Eh?” asked the captain on the next
cot.

“
One of those ladies,” he repeated.
The captain had a gut wound and wouldn’t live through the week. Sam
knew he could tell him anything. “I need a wife right
now.”

“
Oh, you artillerymen,” the captain
murmured. “Wasn’t it enough to wench through Spain?”

With some effort, Sam stood up, then
leaned over and wiped the man’s forehead, which glistened with the
sweat of infection. “It’s a long story, lad. I promised my mother a
wife several years ago in a weak moment ….”

“
Of course! Why else would I do
that? I wrote her that I was married to a daughter of the
regiment.” He sat down, more tired from that small task than he
cared to admit.

“
What were you thinking?” the
captain murmured.

“
Probably that I would be dead
before the war ended, so what difference did it make what I told
her?” Sam retorted. “What does any of us think during
warfare?”

“
It’s worse. My lieutenant got into
the spirit of the thing, and a year later, wrote my mother that my
wife and I had a child and she was a grandmama!”

There was no comment from the
adjoining cot. Good God, I hope the shock of that didn’t kill the
poor man right now, the major thought, as he got up slowly, and
leaned over the captain again. “Are you all right?”

After a long time, the man opened
his eyes. His mouth creased into a smile, and his eyes were bright
with both fever and merriment.

“
That is the funniest thing I have
ever heard, Major,” the captain said. “I’m trying to figure out how
to laugh without hurting everything inside me.”

“
So glad you’re amused,” Sam said as
he wiped the man’s forehead again. “Before I get home to Hadrian’s
Wall, it either has to be marriage or a double murder, and I am not
inclined toward murder, even of the nonexistent.”

The man was silent again, even as
his grin widened. “Good luck, Major. You’ll need it even more where
you’re going, than I will where I am bound.”

“
You’re already confessed and
shriven?” Sam asked, his voice gentle. “You’re ready for what is
ahead?”

The captain nodded, his eyes still
merry. “More than you are, Major, more than you are. If God
Almighty doesn’t strike you dead for what I think you are about to
attempt, some young lady will. I, on the other hand, need merely
face my maker.”

Chastity Belt by Shoshanna Evers
Home: A Novel by Rachel Smith
Blood Red by Wendy Corsi Staub
The Silver Star by Jeannette Walls
An Ordinary Drowning, Book One of The Mermaid's Pendant by Neal Reilly, LeAnn
Second Chances by Harms, C.A.
Rebeca by Daphne du Maurier
The Broken Window by Christa J. Kinde
Discovered by Brady, E. D.
Out of the Ashes by Lori Dillon
Our partner