Read Wonder of Wonders: A Cultural History of Fiddler on the Roof Online

Wonder of Wonders: A Cultural History of Fiddler on the Roof 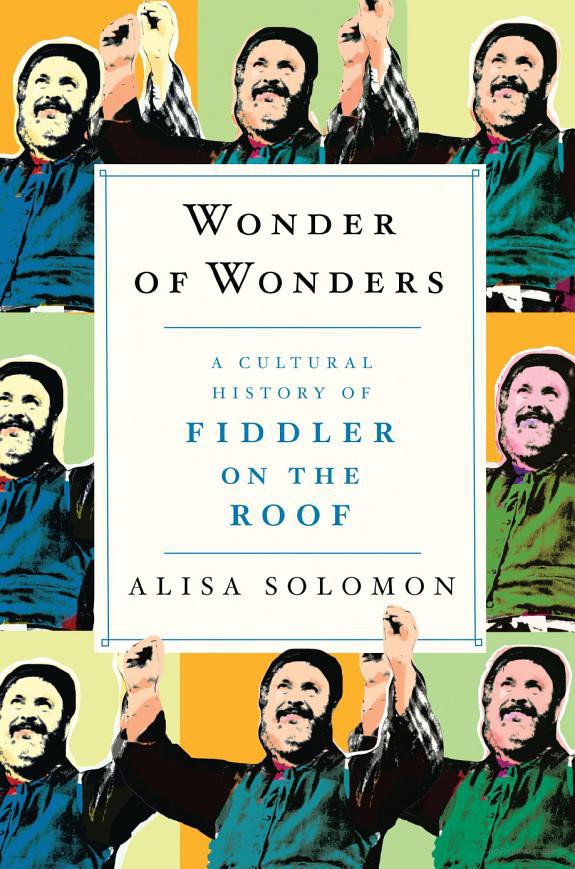 A Note on Spelling

2
Between Two Worlds of Sholem-Aleichem

3
Tevye Leaves for the Land of Broadway

4
It Takes a Shtetl

6
The Old Country in the Old-New Land

A N
OTE ON
S
PELLING

Transliterating from Yiddish can be tricky when different sources take different approaches to Yiddish orthography. I follow the transliteration system of the YIVO Institute for Jewish Research unless the words are quoted from a source that spells them differently. This goes for the names of characters despite some potential confusion: Tevye (according to YIVO and most recent translations and as used in
Fiddler on the Roof)
, Tevya (used in the play by Arnold Perl, discussed in chapter 2), and Tevyeh (as quoted from some press reviews of the earliest translations into English); Tsaytl and Tzeitel; Khave and Chava; Motl and Motel; Hodl, Huddel, and Hodel; and so on.

More complicated is the name Sholem-Aleichem. I use this common spelling, along with initial capital letters (which don’t exist in Yiddish), for its widespread familiarity. (The YIVO standard “Sholem-aleykhem” looks distractingly strange.) I include the hyphen as current scholarly convention—and the writer’s own signature—dictates, more accurately signaling that the pseudonym is an ordinary compound phrase used by Yiddish speakers all the time. It is a common, if slightly formal, greeting that literally means “Peace unto you” but colloquially best translates as “How do you do?” That is why one never refers to the writer simply as “Aleichem” or “Mr. Aleichem.” To do so would be as weird as calling Howdy Doody “Mr. Doody.”

G
lenn
B
eck was welling up as he neared the conclusion of his Restoring Courage rally in Jerusalem in August 2011. The conservative, conspiracy-mongering talk show host choked back tears as he bade his audience farewell. As he left the stage, exit music swelled: “Sabbath Prayer” from
Fiddler on the Roof
.

A few weeks later, Occupy Judaism was planning an outdoor radical Yom Kippur service as an extension of the demonstrations taking place in Lower Manhattan that fall. To get the word out, one of the organizers made a poster that adapted one of the Occupy Wall Street logos. He took the original image—a ballerina balancing on the back of the bronze
Charging Bull
statue that lurches in a park in New York’s financial district—and Photoshopped the dancer out. In her place, he substituted the silhouette of a tottering violinist: another invocation of
Fiddler on the Roof
.

There could hardly be more clashing sensibilities than those of Glenn Beck and Occupy activists—Beck condemned the movement as “worse than Robespierre”—yet both staked a claim to the Broadway musical about the affable dairyman Tevye and his three marriageable daughters living in the Jewish Pale of Settlement in 1905. Beck’s use of the song from the show was naive and even kitschy, while Occupy’s appropriation of the image winked with postmodern irony, but both operated from the assumption that
Fiddler
bears talismanic power to endow an event or object with a warm glow of Jewish authenticity.

The show—created by Jerry Bock (music), Sheldon Harnick (lyrics), Joseph Stein (book), and Jerome Robbins (direction and choreography)—was an instant blockbuster success when it opened in 1964, smashing all box office records in its day. The initial production played 3,242 performances—the longest-running show on Broadway for years. It won Tony Awards in nine categories in 1965. National Public Radio featured
Fiddler
as one of the “100 most important American musical works of the 20th century.” The American Film Institute named Norman Jewison’s movie version among the “100 most inspiring films of all time.” There have been four Broadway revivals, countless national tours, and probably more local productions than the licensing agency can count—more than it even knows about. Some two hundred schools across the country put it on each year. The show has survived censorious dictators, bad productions, and highbrow scolds.

As the first work of American popular culture to recall life in a shtetl—the Eastern European market towns with large Jewish populations—
Fiddler
felt tender, elegiac, even holy. It arrived just ahead of (and helped to instigate) the American roots movement. It was added to multicultural curricula and studied by students across the country in Jewish history units, as if
Fiddler
were an artifact unearthed from a destroyed world rather than a big-story musical assembled by showbiz professionals.

Beyond its continuing vibrant life in the theater,
Fiddler
, like no other musical before or since, has seeped into the culture more widely, functioning in sometimes contradictory ways—which makes sense, since the show’s essential gesture is dialectical: it looks backward and forward, favors both community and individual needs, honors the particular and the universal, struggles between stasis and change, bewails and celebrates. Tevye seems to be constantly caught in these opposing forces and, before our eyes, weighs the arguments of every dilemma—on the one hand, on the other hand …

Fiddler
has served as a Jewish signifier: “Now, I know I haven’t been the best Jew,” Homer tells a rabbi from whom he is trying to borrow money in an episode of
The Simpsons
, “but I have rented
Fiddler on the Roof
and I intend to watch it.” And Tevye or the Fiddler can often be found sharing a rooftop with Santa Claus on interfaith winter holiday cards.

The show has operated as a barometer of Jewish political status: In 1974, Augusto Pinochet banned
Fiddler
in Chile as a “Marxist inspired” work containing “disruptive elements harmful to the nation.” Thirty-five years later, in 2009 in Venezuela, Hugo Chavez defunded the orchestra for a theater presenting
Fiddler
because it wasn’t Marxist enough.
Fiddler
has been a powerful intertextual work, commenting from within in Joseph Cedar’s movie
Footnote
(a family torn by generational conflict goes to see a performance), David Bezmozgis’s novel
The Free World
(a Soviet émigré family with a Stalinist patriarch sees the movie while stuck in Rome, waiting for visas), and Nadia Kalman’s novel
The Cosmopolitans
(
Fiddler
as a structuring device), to name just a few cases.

Occupy Judaism’s Fiddler on the Bull.

Fiddler
has become ritual: kids at summer camps sing “Sabbath Prayer” on Friday evening as they light candles in place of the Hebrew blessing, and for decades weddings didn’t feel complete without a rendition of “Sunrise, Sunset.”

And more. The show is a global touchstone for an astonishing range of concerns: Jewish identity, American immigrant narratives, generational conflict, communal cohesion, ethnic authenticity, and interracial bridge building, among them. It also solidified the origin story of American Jews as flight from persecution in Eastern European shtetls—never mind the actual origins of those from urban centers or from Sephardic and Middle Eastern backgrounds.

How could a commercial entertainment do all this? The answer lies in large part in where
Fiddler
came from and how it was made.
Wonder of Wonders
sets out to tell that tale: to look at what prepared the way for the musical historically, culturally, and aesthetically, how it turned into a show with such abiding power, and where it has been a catalyst for cultural shifts. It is a story about ethnic assertion and cultural adaptation and about the exigencies and outsize personalities of showbiz. Tracing the surprising, enduring, shape-shifting utility of the beloved musical,
Wonder of Wonders
explores how a work of popular culture can glow with a radiant afterlife, illuminating for different audiences the pressing issues of their times.

Specifically, it is a story about theater, the making of it and the meanings that come from the messy and marvelous collaborations that are its essence—interactions among artists, between artists and audiences, between a show and the world.

The story begins at the source: Sholem-Aleichem, the great Yiddish writer who created Tevye in a short story in 1894 and, over the next two decades, occasionally put a new chapter about his tragicomic hero into the world. Best beloved as a story writer, Sholem-Aleichem also created novels and plays and he was eager to break into New York’s Yiddish theater scene.

His first major foray into the theater, with his first full-length play, was a smash. Called
Tsezeyt un tseshpreyt
(
Scattered and Dispersed
), the play, which dealt with intergenerational conflict, triumphed at the Elysium Theater in Warsaw in the spring of 1905. It was performed in Polish (because of the Russian Empire’s standing, if erratically enforced, ban on performances in Yiddish) and the house was packed. At the urging and expense of the producer and translator, Mark Arenshteyn, Sholem-Aleichem traveled from his home in Kiev to Warsaw to see for himself.

“What shall I write you about yesterday’s triumph?” Sholem-Aleichem asked his daughter in a letter the day after he saw the show. In ecstatic detail, he described how the audience “literally covered me with flowers” after the first act and how after every act that followed they called him to the stage repeatedly. In the fourth act, he reported, “the public simply went crazy, applauding every phrase that had any connection to the play’s theme. At the end, hats started flying in the air and some kind of wild, elemental force tried to gobble me up. For a moment I thought the theater might cave in.”

Persuade Me by Juliet Archer
After the Last Dance by Manning, Sarra
The Legend of the Light Keeper (The Light Keeper Series Book 1) by Hall, Kelly
The Red Queen by Philippa Gregory
A Long Way From Chicago by Richard Peck
The Training Ground by Martin Dugard
Christmas at Pemberley by Regina Jeffers
Lost on a Mountain in Maine by Donn Fendler
Crimson Wind by Diana Pharaoh Francis
He Kills Me, He Kills Me Not by Lena Diaz
Our partner