Read Working It Out Online 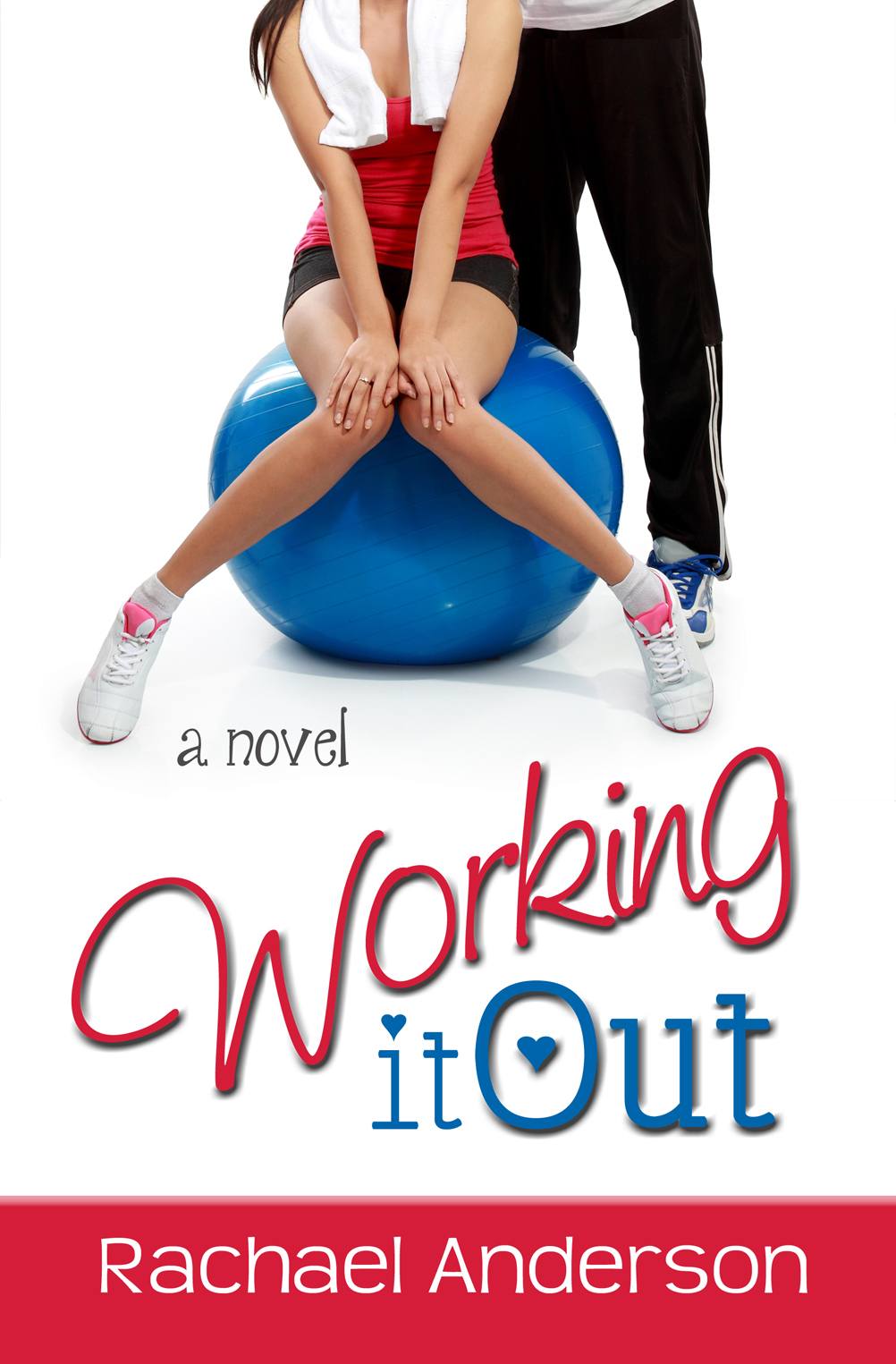 No part of this book may be reproduced in any form
whatsoever, whether by graphic, visual, electronic, film, microfilm, tape
recording, or any other means, without prior written permission of the
publisher, except in the case of brief passages embodied in critical reviews
and articles.

This is a work of fiction. The characters, names,
incidents, places, and dialogue are products of the author’s imagination, and
are not to be construed as real. The opinions and views expressed herein belong
solely to the author and do not necessarily represent the opinions or views of
HEA Publishing, LLC. Permission for the use of sources, graphics, and photos is
also solely the responsibility of the author.

Other Books By Rachael Anderson

All I Want: Three Holiday Romances

Excerpt from My Own Mr. Darcy

O
ne person
tried
Seth Tuttle’s patience like no other. The beautiful, sweet, and
totally frustrating, Lanna Carver. She was the closest thing he had to a
sister, and for the most part, Seth adored her. But when she raised her chin in
that defiant, I’ve-made-up-my-mind-and-you’re-not-going-to-talk-me-out-of-it way,
Seth might as well beat his head against the nearest brick wall.

Or white painted cinderblock, in this instance.

“You want to do
what
?” Seth raked his fingers
through his short hair as he paced across Lanna’s worn carpeted floor.

Lanna sat on the armrest of her faded sofa and clasped
her fingers together, her large blue eyes wide and innocent. “It’s called a
bachelor auction, and
I
don’t want to do it. Milly does.”

“But you’re going along with it.”

She threw up her hands. “I’m out of fundraising ideas, okay?
Milly swears this will earn enough to keep the afterschool program going for at
least another year. So yeah, I’m going along with it. I’m even helping as much
as I can because we need the money. Evidently the Seattle area is filled with
single women, and many of them would pay well for a date with a handsome,
wealthy, and charming bachelor.” She paused. “Like you.”

She didn’t even blink when she said it. There was no
twitching of her lips or hint of a smile either. Lanna was serious. She
actually wanted Seth to be one of the bachelors.

He groaned. “You’ve got to be kidding me.”

“It’s for a good cause, Seth. Those underprivileged kids
need our tutoring program, especially the ones struggling with English. They’re
so far behind.”

It was a problem for which Seth had a solution, if only Lanna
would see reason and accept it. “Which is why I’ve offered—more than once—to
fund your little program. Remember? Have you even told Milly about my offer?
Because I
know
she’d accept the money.”

Lanna rubbed her hands across the top of her jeans and
lifted her chin. “How many times do I have to tell you that it’s not your job
to fund my projects? I’m trying to
run
a charity—not be one. Milly and I
can do this on our own. I
want
us to do it on our own.”

Seth felt the stirrings of frustration that came with any
conversation revolving around money and Lanna. He didn’t get it, or her. Dropping
down next to her on the sofa, he placed his hand over hers. “That’s my point.
You don’t have to do it on your own.”

Lanna’s expression turned pleading as she covered his
hand with her other one. “Listen, Seth, I appreciate the offer, I do. But ever
since Mike died, you’ve been trying to take care of me and solve all of my
problems. That needs to end. I want and need you in my life as a brother figure,
not a benefactor.”

She sounded so confident, but Seth knew from experience
that Lanna needed looking out for—not that anyone would know based on her
appearance. The girl definitely knew how to dress well, even though her clothes
came from some off-price department store like TJMaxx. But one look at her
dumpy third-floor studio apartment in a slummy part of town and anyone would
know the truth: Lanna was barely scraping by.

Seth, on the other hand, had more money than he knew what
to do with. Yet would Lanna accept his help? No. Oh, he’d tried. Many, many
times. But it always came back to bite him. The worst being when he’d attempted
to anonymously pay for her rent one month. The next day, she showed up on his
doorstep, cash in hand, to pay him back. Then she yelled at him about wasted
gas money and for making her late to work.

Sometimes Seth wondered if Mike, his former best friend
and Lanna’s brother, had known what he’d asked of Seth in that dreary hospital
room all those years before.

“Seth, take care of Lanna,” Mike had whispered from the
bed. “Please.”

Seth had readily agreed. Of course he’d look after Lanna.
He’d already planned on it. Problem was, Mike didn’t exact a similar promise
from his sister. Something along the lines of “Lanna, please let Seth help you
out every once in a while” would have been helpful.

Looking back, Seth often wondered if Mike had any idea
how difficult his sister would end up being. Probably. Seth wouldn’t be
surprised if his old friend was looking down from heaven right now and
laughing.

Seth squeezed Lanna’s hand, as if the pressure would
somehow make her see reason. “But that’s what I’m trying to do. If Mike were
still here and offering the same thing, you know you’d accept the money from
him.”

Lanna pulled her hand free and stood, staring down at
him. With her petite build, standing above him while he sat was the only time
she could ever tower over him, which she apparently felt the need to do at the
moment. Her arms folded as a determined look flashed across her face. “But
Mike’s not here, is he? And any day you could be taken from me as well,
especially with all the crazy stunts you like to pull. I need to know for
myself that I’m capable of doing things all on my own. Why can’t you understand
that?”

Seth rolled his eyes and flopped back on the couch. Going
up against Lanna was like taking on a brutal workout. It exhausted him. “I’m
not going anywhere, Lanna.”

“You can’t guarantee that.”

Seth didn’t understand why they were even talking about
this. “This isn’t even about you anyway. I’m not trying to pay your rent or the
balance on your credit card. I’m trying to pay for a
charity
. You say
you don’t want my help, but yet you still want me to be one of the bachelors and
auction myself off like some kind of animal.”

Her expression softened, and the corners of her mouth
tugged up into a teasing smile. “Of course I do. You’re handsome, smart, and
have that confident swagger most girls find irresistible. You’d get top
dollar.”

Seth closed his eyes in frustration. It was no use.
Arguing with Lanna was like arguing with a two-ton boulder. She wouldn’t budge.

“It’s in three weeks,” Lanna continued. “And it’s going
to be really nice. Milly’s dad is friends with the owner of the Bellevue Hotel,
so we’re having it there. We’re only inviting a select group of women, so we’ll
have complete control over who comes. It will be classy, I promise.”

How like Lanna to refuse to give an inch while still
expecting Seth to capitulate. Well, that wasn’t going to happen—not today,
anyway.

Seth stood and squared his shoulders, looking down on her
instead of the other way around. “Why is it that Milly doesn’t have a problem
taking handouts from people, but you do? Doesn’t the owner of that hotel
contribute to your cause?”

“Yes, he has been very generous. But that’s just it. He
contributes because he
believes
in our cause and the good it will do for
our community. You, on the other hand, only want to donate to ease your
conscience about me, which isn’t okay. I refuse to take any money from you when
your heart’s not in it. I will, however, happily add your name to the list of
bachelors.” Her expression turned hopeful, almost pleading.

Seth raked his fingers through his hair again and resumed
his pacing, wishing he could shake some sense into her. “Sorry, but that’s not
the kind of help I’m offering. No way am I going to parade around in front of a
bunch of desperate women and be forced to go out with the highest bidder. It’s
the money on the table here—not me. Take it or leave it.”

Lanna’s expression fell slightly, and her smile took on a
strained quality. But she kept her head high. “I’ll leave it, thanks.”

Knowing he’d be tempted to strangle her if this continued
much longer, Seth turned on his heel and walked to the door. With one last look
over his shoulder, he said, “If you change your mind—”

His jaw clenched, and Seth closed the door behind him
with a hard tug. Walking past the elevator, he opened the door to the stairwell
and took the stairs two at a time, needing to burn off some of his frustration.
Lanna had her sights fixed on one thing and one thing only: to prove to the
world she didn’t need any help from anyone—least of all from him.

Well, no more. Seth was sick of it. Whether Lanna liked
it or not, she would get his help. He was just as determined, if not more so,
than Lanna. After all, he’d made a promise to Mike, and Seth always kept his
promises.

Seth emerged outside and filled his lungs with Seattle’s
cool and humid January air before searching the street for his car. What he
needed now was some good hard exercise to shake this off and figure out what to
do next. Thank goodness he and his buddies had a basketball game lined up in an
hour. He could throw a few elbows, make a few baskets, and clear his mind from
all thoughts of Lanna Carver.