Which leads me to my favorite gold coin of all time, a passage from a 1984 story written by Peter Rinearson for the
Seattle Times.
The gold coin appeared in a long chapter in a long series about the creation of a new airliner, the Boeing 757. The chapter on engineering, for example, included endless details about the passenger door, how it contained five hundred parts and was "held together by 5,900 rivets."

Just when my interest began to fade, I came across a passage I hat described how engineers tested the integrity of cockpit windows, which are often hit by birds:

Boeing is a little touchy about the subject of chicken tests, and points out they are required by the FAA. Here's what happens:

A live 4-pound chicken is anesthetized and placed in a flimsy plastic bag to reduce aerodynamic drag. The bagged bird is put in a compressed-air gun.

The bird is fired at the jetliner window at 360 knots and the window must withstand the impact. It is said to be a very messy test.

The inch-thick glass, which includes two layers of plastic, needn't come out unscathed. But it must not puncture. The test is repeated under various circumstances — the window is cooled by liquid nitrogen, or the chicken is fired into the center of the window or at its edge. "We give Boeing an option," Berven joked. "They can either use a 4-pound chicken at 200 miles an hour or a 200-pound chicken at 4 miles an hour."

No one who reads about the chicken test thinks about air travel or Colonel Sanders the same way again.

While the authors of books and screenplays know the value of dramatic and comic high points in a story, journalists have a disadvantage. Their work is so top heavy that even an eager editor will do the wrong thing for the right reason.

"That's a great quote," says the admiring editor to the writer. "Let's move it up."

"Readers will learn a lot from that anecdote. Let's move it up." And so it goes. Moving up the good bits honors the material but may dishonor the story. The result is bait and switch. The reader winds up with three or four nifty paragraphs, followed by the toxic waste that drifts to the bottom.

1. Think about the strategy of the gold coins. Review your recent works to see if they are top heavy. Look for missed opportunities to create a more balanced structure.

2. Carry the concept of the gold coins into your reading and movie watching. Study the structure of stories, looking for the strategic placement of dramatic or comic high points.

3. Take a draft you are working on and identify the gold coins. Draw a star next to any story element that shines. Now study their placement and consider moving them around.

4. See if you can recognize gold coins during your research. When you see one or hear one, report it thoroughly so it can have the best possible effect in your story.

5. Find the geographic middle in some pieces of your writing. Is there a gold coin in sight? 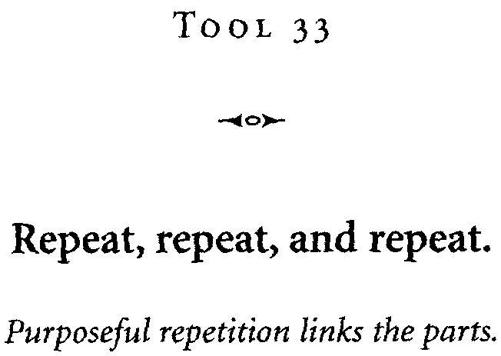 Repetition works in writing, but only if you intend it. Repeating key words, phrases, and story elements creates a rhythm, a pace, a structure, a wavelength that reinforces the central theme of the work. Such repetition works in music, in literature, in advertising, in humor, in political speech and rhetoric, in teaching, in homilies, in parental lectures — even in this sentence, where the word "in" is repeated ten times.

Repetition gives texture to conversation and dialogue, lending dramatic literature the feeling that real people speak in a real world:

Few people know this and I'm telling you this only because____I'm not afraid of
death.
What can death bring that I

haven't faced? I've lived;
life
is the worst.
(Gently mocking himself)
Listen to me, I'm a philosopher.

Joe. You
must
do this. You must must must. Love; that's a
trap.
Responsibility; that's a trap too. Like a father to a son I tell

you this: Life is full of horror;
nobody
escapes, nobody; save yourself.
Whatever
pulls on you, whatever needs from you, threatens you. Don't be
afraid;
people are so afraid; don't be afraid to
live
in the raw wind, naked, alone.... Learn at least this: What you are capable of. Let nothing stand in your way.

This remarkable dialogue comes from Tony Kushner's epic play
Angels in America.
To my ear, the repetition makes it seem real. And consider the words the playwright chooses to repeat for emphasis in a passage of only 126 words: "death," "life,", "must," "trap," "nobody," "whatever," "afraid," "live."

Repetition can work in sentences and paragraphs, as well as across the longer stretches of a story. Consider this scene from Maya Angelou's memoir I
Know Why the Caged Bird Sings:

His twang jogged in the brittle air. From the side of the Store, Bailey and I heard him say to Momma, "Annie, tell Willie he better lay low tonight. A crazy nigger messed with a white lady today. Some of the boys'll be coming over here later." Even after the slow drag of years, I remember the sense of fear which filled my mouth with hot, dry air, and made my body light.

The "boys"? Those cement faces and eyes of hate that burned the clothes off you if they happened to see you lounging on the main street downtown on Saturday. Boys? It seemed that youth had never happened to them. Boys? No, rather men who were covered with graves' dust and age without beauty or learning. The ugliness and rottenness of old abominations.

The author fills this passage with interesting language, from dialogue expressed in dialect to phrases of biblical connotation. The repetition of "boys" holds it together.

Writers use repetition as a tool of persuasion, few as skillfully as Michael Gartner, who, in a distinguished and varied journalism career, won a Pulitzer Prize for editorial writing. Consider this excerpt from "Tattoos and Freedom":

We haven't seen the arms of Jackson Warren, the food-service worker at Iowa State University, but they do sound repulsive. A swastika on one, KKK on the other.

The administrators at the university think so, too, so in response to a student's complaint they've "temporarily reassigned" Warren to a job where he won't be in contact with the general public.

Gartner's repetition of "ugh" and "That's obnoxious/outrageous" frames the argument for protection of free speech, even when that speech is expressed in a hateful way.

Remember the flag burners in Texas? The Nazi marchers in Skokie? The war protesters everywhere? Protected citizens, one and all. Obnoxious, sometimes. Outrageous, sometimes. Despicable, sometimes.

The message you're giving is clear:

This is a school that believes in free speech.

This is a school that protects dissent.

This is a school that cherishes America.

That's what Iowa State officials should be saying.

For Jackson Warren, bedecked in symbols of hate, should himself be a symbol of freedom.

As we saw in Tool 20, the number of examples has meaning, and so does the number of repetitions. Three gives us a sense of the whole, while two creates comparison and contrast, symbols of hate versus symbol of freedom.

For Gartner, repetition is never accidental. "It's the refrain," he told Chip Scanlan,

the rhythmic refrain with a different tag on it each time. It's almost a musical device. I love Broadway musicals and have always thought I could write a musical. Couldn't write the music, but I could write the lyrics because
I like
word play and rhymes, rhythms, and beats, and cadences. Sometimes I think these editorials are the lyrics to a song that has never been written.

In the hands of master teachers and poets, repetition has a power transcending the rhetorical, ascending to the level of myth and scripture. These words, for example, from the book
Night
by Elie Wiesel, are attached to a wall of the United States Holocaust Memorial Museum:

Never shall I forget those flames
which consumed my
faith forever.

Repetition can be so powerful, in fact, that it can threaten to call attention to itself, overshadowing the message of the story. If you're worried about too much repetition, apply this little test: Delete all the repetition and read the passage aloud without it. Repeat the key element once. Repeat it again. Your voice and ear will let you know when you've gone too far.

2. Read through an anthology of historical speeches and look for repetition. Make a list of the reasons the authors use repetition, starting with: to help us remember, to build an argument, to underscore emotion.

3. Try rewriting the passage by Elie Wiesel. For the sake of the exercise, eliminate as many uses of "never" as you can without altering the meaning. Now read both the original version and your revision aloud. Think about what you've discovered.

4. Repetition does not have to be highly rhetorical. For example, you can mention or quote a character three
times
in a story, at the beginning, in the middle, and near the end, to chain the elements together. Look for examples of this style of repetition in news stories.

5. British author John Ruskin advised: "Say all you have to say in the fewest possible words, or your reader will be sure to skip them; and in the plainest possible words or he will certainly misunderstand them." Using the standards of "fewest" and "plainest," evaluate the repetition in the works cited above.

Not Quite Juliet: A Club Imperial Novel (Silver Soul Book 1) by Katherine Rhodes
A Sea of Shields (Book #10 in the Sorcerer's Ring) by Morgan Rice
Best Boy by Eli Gottlieb
EllRay Jakes Stands Tall by Sally Warner
More, Please by Aster, Kate
Nowhere to Go by Casey Watson
Kitten Catastrophe by Anna Wilson
Lady of the Butterflies by Fiona Mountain
Under the Gun (CEP Book 3) by Harper Bentley
Before My Life Began by Jay Neugeboren
Our partner