Fifty-five words in all, forty-eight of one syllable. Only one word ("accepted") of three syllables. Even the book title works this way.

Once on a Wednesday excursion when I was a little girl, my father bought me a beaded wire ball that I loved. At a touch, I could collapse the toy into a flat coil between my palms, or pop it open to make a hollow sphere. Rounded out, it resembled a tiny Earth, because its hinged wires traced the same pattern of intersecting circles that I had seen on the globe in my schoolroom — the thin black lines of latitude and longitude. The few colored beads slid along the wire paths haphazardly, like ships on the high seas.

Simplicity is not handed to the writer. It is the product of imagination and craft, a created effect.

Remember that clear prose is not just a product of sentence length and word choice. It derives first from a sense of purpose — a determination to inform. What comes next is the hard work of reporting, research, and critical thinking. The writer cannot make something clear until the difficult subject is clear in the writer's head. Then, and only then, does she reach into the writer's toolbox, ready to explain to readers, "Here's how it works."

1. Review writing you think is unclear, dense with information. A tax form, perhaps, or a legal contract. Study the length of words, sentences, and paragraphs. What have you discovered?

2. Repeat the process with your prose. Pay attention to passages you now think are too complicated. Revise a passage using the tools described in this section.

3. Collect examples of stories where the writer has turned hard facts into easy reading. Start by browsing through a good academic encyclopedia.

4. Look for an opportunity to use the sentence, "Here's how it works." 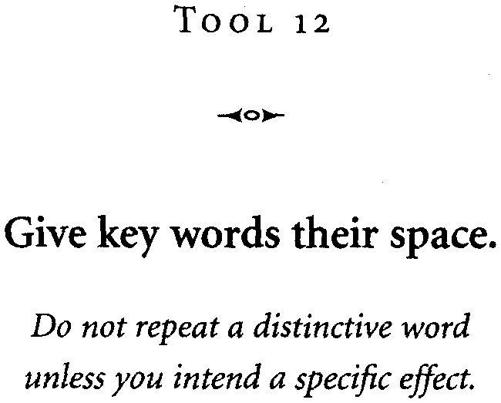 I coined the phrase
word territory
to describe a tendency I notice in my own writing. When I read a story I wrote months or years ago, I am surprised by how often I repeat words without care. Writers may choose to repeat words or phrases for emphasis or rhythm: Abraham Lincoln was not redundant in his hope that "government of the people, by the people, for the people, shall not perish from the earth." Only a mischievous or tone-deaf editor would delete the repetition of "people."

To preserve word territory, you must recognize the difference between intended and unintended repetition. For example, I once wrote this sentence to describe a writing tool: "Long sentences
create
a flow that carries the reader down a stream of understanding,
creating
an effect that Don Fry calls 'steady advance.' " It took several years and hundreds of readings before I noticed I had written "create" and "creating" in the same sentence. It was easy enough to cut "creating," giving the stronger verb form its own space. Word territory.

In 19781 wrote this ending to a story about the life and death of Beat writer Jack Kerouac in my hometown of St. Petersburg, Florida:

How fitting then that this child of
bliss
should come in the end to St. Petersburg. Our city of golden sunshine, balmy serenity and careless
bliss,
a paradise for those who have known hard times. And, at once, the city of wretched loneliness, the city of rootless survival and of restless wanderers, the city where so many come to die.

Years later, I admire that passage except for the unintended repetition of the key word "bliss." Worse yet, I had used it before, two paragraphs earlier. I offer no excuse other than feeling blissed out in the aura of Kerouac's work.

I've heard a story, which I cannot verify, that Ernest Hemingway tried to write book pages in which no key words were repeated. That effect would mark a hard-core adherence to word territory, but, in fact, does not reflect the way Hemingway writes. He often repeats key words on a page —
table, rock, fish, river, sea
— because to find a synonym strains the writer's eyes and the reader's ears.

Consider this passage from
A Moveable Feast
(the emphasis is mine):

As a reader, I appreciate the repetition in the Hemingway passage. The effect is like the beat of a bass drum. It vibrates the writer's message into the pores of the skin. Some words — like "true" and "sentence" — act as building blocks and can be re-

peated to good effect. Distinctive words — like "scrollwork" and "ornament" — deserve their own space.

Observing word territory eliminates repetition, but its best effect is to craft writing with distinctive language in support of the work's purpose. Consider this wonderful rant written by John Kennedy Toole for the lips of Ignatius J. Reilly, the elephantine hero of
A Confederacy of Dunces.
The city in question is New Orleans, and the object of scorn is a police officer who has told Reilly to shove off:

"This city is famous for its gamblers, prostitutes, exhibitionists, anti-Christs, alcoholics, sodomites, drug addicts, fetishists, onanists, pornographers, frauds, jades, litterbugs ... all of whom are only too well protected by graft. If you have a moment, I shall endeavor to discuss the crime problem with you, but don't make the mistake of bothering me."

In a paragraph of fifty-three words, only two are repeated ("you" and "the"). The rest is a fountain of interesting language, an inventory of deviance that defined the dark side of the Crescent City before Hurricane Katrina washed so much of it away.

One final piece of advice: Leave
said
alone. Don't be tempted by the muse of variation to permit characters to opine, elaborate, cajole, or chortle.

1. Read something you wrote at least a year ago. Pay attention to the words you repeat. Divide them into three categories: (a) function words
(said, that),
(b) building-block words
(house, river),
and (c) distinctive words
(silhouette, jingle).

2. Do the same with a new draft. Your goal is to recognize unintended repetition before it is published.

3. Read selections from novels and nonfiction stories that make use of dialogue. Study the attribution, paying close attention to when the author uses
says
or
said,
and when the writer chooses a more descriptive alternative.

4. Imagine that you have written a draft in which you repeat on a single page of text the following words:
sofa, mouth, house, idea, earthquake, friend.
Consider which of these you might revise with a synonym to avoid repetition. 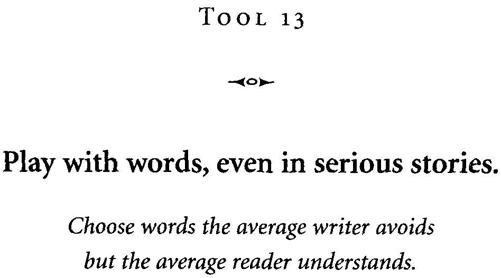 Just as a sculptor works with clay, a writer shapes a world with words. In fact, the earliest English poets were called
shapers,
artists who molded the stuff of language to create stories the way that God, the Great Shaper, formed heaven and earth.

Good writers play with language, even when the topic is death. "Do not go gentle into that good night," wrote Welsh poet Dylan Thomas to his dying father. "Rage, rage against the dying of the light."

Play and death may seem at odds, but the writer finds ways to connect them. To express his grief, the poet fiddles with language, prefers "gentle" to
gently,
chooses "night" to rhyme with "light," and repeats the word "rage." Later, he will pun about those "grave men, near death, who see with blinding sight." The double meaning of "grave men" leads straight to the oxymoron "blinding sight." Wordplay, even in the shadow of death.

The headline writer is the poet among journalists, stuffing big meaning into small spaces. Consider this headline about a shocking day during the war in Iraq:

The circumstances are hideous: Iraqi civilians attack American security officers, burn them to death in their cars, beat and dismember their charred carcasses, drag them through the street, and hang what's left from a bridge — all while onlookers cheer. Even amid such carnage, the headline writer plays with the language. The writer repeats consonant sounds (b and m) for emphasis, and contrasts the words "jubilant" and "dead" with surprising effect. "Jubilant" stands out as well chosen, derived from
jubilare,
the Latin verb that means "to raise a shout of joy."

Words like "mob," "dead," and "Americans" appear in news reports all the time. "Mauls" is a verb we might see in a story about a dog attack on a child. But "jubilant" is a distinctive word, comprehensible to most readers, but rare in the context of news.

Too often, writers suppress their vocabularies in a misguided attempt to lower the level of language for a general audience. Obscure words should be defined in texts or made clear from context. But the reading vocabulary of the average citizen is larger than the writing vocabulary of the typical author. As a result, scribes who choose their words from a deeper well attract special attention from readers and gain reputations as "writers."

A rich writing vocabulary does not require big or fancy words. One of America's greatest essayists was M. F. K. Fisher, known for writing about food, but always adding the flavor of playful language to all her work. This vivid childhood memory describes a small room carved out of the side of a garage to house a favorite workman:

The room had been meant for tools, I assume. It was big enough for a cot, which was always tidy, and an old Morris chair, and a decrepit office desk. The walls were part of the garage, with newspaper darkening on them to keep out the drafts. There was a small round kerosene stove, the kind we sometimes used in our Laguna summer place, with a murky glow through its window and a good warm smell. There was soft light from an overhead bulb. There was a shelf of books, but what they were I never knew. From the roof beams hung slowly twirling bundles of half-cured tobacco leaves, which Charles got through some strange dealings from Kentucky. He dried them, and every night ground their most brittle leaves into a pipe mixture in the palm of his hand. He would reach up, snap off a leaf, and then sit back in his old chair and talk to us, my sister Anne and the new one Norah and me, until it was time to puff out more delicious fumes, (from
Among Friends)

Fisher uses no elaborate metaphors here or easy puns. Her play comes in the form of a constellation of precise words and images that transport us from our own time and place to that little room so long ago.

Remember to Breathe (Book One of the True Desires Series) by Finas, A.G.
The Equen Queen by Alyssa Brugman
GI Brides: The Wartime Girls Who Crossed the Atlantic for Love by Barrett, Duncan; Calvi, Nuala
Just Send Me Word: A True Story of Love and Survival in the Gulag by Figes, Orlando
Exodus by Paul Antony Jones
Always by Iris Johansen
Paradise Wild (Wild At Heart Book 2) by Christine Hartmann
The Lazarus Vault by Tom Harper
Rogue Element by David Rollins
Gideon's Trumpet by Anthony Lewis
Our partner