Such intentional violation of parallelism adds power to the conclusion of King's speech:

When King points the compass of freedom toward the segregationist South, he alters the pattern. Generalized American topography is replaced by specific locations associated with racial injustice: Stone Mountain and Lookout Mountain. The final variation covers not just mighty mountains, but every bump of Mississippi.

All writers fail, on occasion, to take advantage of parallel structures. The result for the reader can be the equivalent of driving over a pothole on a freeway. What if Saint Paul taught us that the three great virtues were faith, hope, and committing ourselves to charitable work? What if Abraham Lincoln had written about a government of the people, by the people, and for the entire nation, including the red and blue states? These violations of parallelism should remind us of the exquisite balance of the original versions.

1. Examine your recent work with parallelism in mind. Look for examples in which you used parallel structures. Can you find potholes — some unparallel phrases or sentences — that jar the reader?

2. Notice parallel language in novels, in creative nonfiction, in journalism. When you find a passage, underline the parallel structures with a pencil. Discuss the effects of parallelism on the reader.

3. Just for fun, take parallel slogans or sayings and rewrite the last element. For example, John, Paul, George, and that drummer who wears the rings.

4. By fiddling with parallel structures, you might discover that an occasional violation of parallelism — a twist at the end — can lend a humorous imbalance to a sentence. Give it a try. 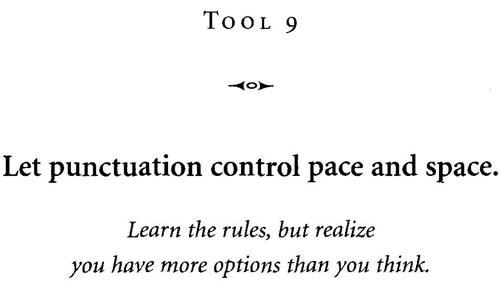 Some teach punctuation using technical distinctions, such as the difference between restrictive and nonrestrictive clauses. Not here. I prefer tools, not rules. My preference shows no disrespect for the rules of punctuation. They help the writer and the reader as long as everyone remembers that such rules are arbitrary, determined by consensus, convention, and culture.

If you check the end of that last sentence, you will notice that I used a comma before "and" to end a series. For a quarter century, we at the Poynter Institute have argued about that comma. Fans of Strunk and White (that's me!) put it in. Thrifty journalists take it out. As an American, I spell the word
color
"color," and I place the comma inside the quotation marks. My cheeky English friend spells it "colour", and she leaves that poor little croissant out in the cold.

Most punctuation is required, but some is optional, leaving the writer with many choices. My modest goal is to highlight those choices, to transform the formal rules of punctuation into useful tools.

Punctuation
comes from the Latin root
punctus,
or "point." Those funny dots, lines, and squiggles help writers point the way. To help readers, we punctuate for two reasons:

1. To set the pace of reading.

2. To divide words, phrases, and ideas into convenient groupings.

You will punctuate with power and purpose when you begin to consider pace and space.

Think of a long, well-written sentence with no punctuation except the period. Such a sentence is a straight road with a stop sign at the end. The period is the stop sign. Now think of a winding road with lots of stop signs. That analogy describes a paragraph with lots of periods, an effect that will slow the pace of the story. The writer may desire such a pace for strategic reasons: to achieve clarity, convey emotion, or create suspense.

If a period is a stop sign, then what kind of traffic flow is created by other marks? The comma is a speed bump; the semicolon is what a driver education teacher calls a "rolling stop"; the parenthetical expression is a detour; the colon is a flashing yellow light that announces something important up ahead; the dash is a tree branch in the road.

A writer once told me that he knew it was time to hand in a story when he had reached this stage: "I would take out all the commas. Then I would put them all back." The comma may be the most versatile of marks and the one most closely associated with the writer's voice. A well-placed comma points to where the writer would pause if he read the passage aloud. "He may have been a genius, as mutations sometimes are." The author of that line is Kurt Vonnegut. I have heard him speak, and that central comma
is
his voice.

More muscular than the comma, the semicolon is most useful for dividing and organizing big chunks of information. In his essay "The Lantern-Bearers," Robert Louis Stevenson describes an adventure game in which boys wore cheap tin lanterns — called
bull's-eyes
— under their coats:

We wore them buckled to the waist upon a cricket belt, and over them, such was the rigour of the game, a buttoned top-coat. They

smelled noisomely of blistered tin; they never burned aright, though they would always burn our fingers; their use was naught; the pleasure of them merely fanciful; and yet a boy with a bull's-eye under his top-coat asked for nothing more.

Parentheses introduce a play within a play. Like a detour sign in the middle of a street, they require the driver to maneuver around to regain the original direction. Parenthetical expressions are best kept short and (Pray for us, Saint Nora of Ephron) witty.

My great friend Don Fry has undertaken a quixotic quest to eliminate that tree branch in the road — the dash. "Avoid the dash," he insists as often as William Strunk begged his students to "omit needless words." Don's crusade was inspired by his observation — with which I agree — that the dash has become the default mark for writers who never mastered the formal rules. But the dash has two brilliant uses: a pair of dashes can set off an idea contained within a sentence, and a dash near the end can deliver a punch line.

In his book
Propaganda,
Edward Bernays uses both kinds of dashes to describe the purposes of political persuasion:

Propaganda does exist on all sides of us, and it does change our mental pictures of the world. Even if this be unduly pessimistic — and that remains to be proved — the opinion reflects a tendency that is undoubtedly real.

We are proud of our diminishing infant death rate — and that too is the work of propaganda.

That leaves the colon, and here's what it does: it announces a word, phrase, or clause the way a trumpet flourish in a Shakespeare play sounds the arrival of the royal procession. More from Vonnegut:

I am often asked to give advice to young writers who wish to be famous and fabulously well-to-do. This is the best I have to offer:

While looking as much like a bloodhound as possible, announce that you are working twelve hours a day on a masterpiece. Warning: All is lost if you crack a smile, (from
Palm Sunday)

Writers store other punctuation arrows in their quiver, including ellipses, brackets, exclamation points, and capital letters. These have formal uses, of course, but in the hands of an inventive writer they can express all the organ stops of voice, pitch, and tone. Here, for example, James McBride describes the power of a preacher in
The Color of Water:

When it comes to punctuation, all writers develop habits that buttress their styles. Mine include wearing out the comma and using more periods than average. I abhor unsightly blemishes, so I shun semicolons and parentheses. I overuse the colon. I write an exclamation with enough force to avoid the weedy appendage of an exclamation point. I prefer the comma to the dash but sometimes use one — if only to pluck Don Fry's beard.

1. Make sure you have a good basic reference to guide you through the rules of punctuation. I favor
A Writer's Reference
by Diana Hacker. For fun, read
Eats, Shoots & Leaves,
a humorous if crusty attack by Lynne Truss against faulty punctuation, especially in public texts.

2. Take one of your old pieces and repunctuate it. Add some optional commas, or take some out. Read both versions aloud. Hear a difference?

3. Make conscious decisions on how fast you'd like the reader to move. Perhaps you want readers to zoom across the landscape. Or to tiptoe through a technical explanation. Punctuate accordingly.

4. Reread this section and analyze my use of punctuation. Challenge my choices. Repunctuate it.

5. When you gain confidence, have some fun and use the punctuation marks described above as well as ellipses, brackets, and capital letters. Take inspiration from the passage by James McBride. 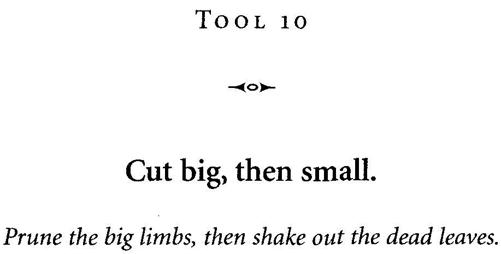 When writers fall in love with their words, it is a good feeling that can lead to a bad effect. When we fall in love with all our quotes, characters, anecdotes, and metaphors, we cannot bear to kill any of them. But kill we must. In 1914 British author Arthur Quiller-Couch wrote it bluntly: "Murder your darlings."

Such ruthlessness is best applied at the end of the process, when creativity can be moderated by coldhearted judgment. A fierce discipline must make every word count.

"Vigorous writing is concise," wrote William Strunk in the first edition of
The Elements of Style.

A sentence should contain no unnecessary words, a paragraph no unnecessary sentences, for the same reason that a drawing should have no unnecessary lines and a machine no unnecessary parts. This requires not that the writer make all his sentences short, or that he avoid all detail and treat his subjects only in outline, but that he make every word tell.

But how to do that?

Begin by cutting the big stuff. Donald Murray taught me that brevity comes from selection, not compression, a lesson that requires lifting blocks from the work. When Maxwell Perkins edited Thomas Wolfe, he confronted manuscripts that could be weighed by the pound and delivered in a wheelbarrow. The famous editor once advised the famous author: "It does not seem to me that the book is over-written. Whatever comes out of it must come out block by block and not sentence by sentence." Perkins reduced one four-page passage about Wolfe's uncle to six words: "Henry, the oldest, was now thirty."

If your goal is to achieve precision and concision, begin by pruning the big limbs. You can shake out the dead leaves later.

Fade to White by Wendy Clinch
Sundown on Top of the World: A Hunter Rayne Highway Mystery by R.E. Donald
Knotted Pleasure by Powerone
Zomb-Pocalypse by Berry, Megan
Possessions by Judith Michael
The Outback Heart by Fiona Palmer
Resistance (Dark Realm Series) by Mason, Patricia
Unwelcome Reunions (His Dirty Secret Book 3) by Evelyn Troy
Obsession by Samantha Harrington
The Making of Us by Lisa Jewell
Our partner