How much better that "the audience pattered applause" than that it "applauded politely."

Adverbiage reflects the style of an immature writer, but the masters can bump their shins as well. In 1963 John Updike wrote a one-paragraph essay, "Beer Can," about the beauty of that sacred vessel before the invention of the pop-top. He reminisced about how suds once "foamed eagerly in the exultation of release." As I've read that sentence over the years, I've grown more impatient with "eagerly." It clogs the space between a great verb ("foamed") and a great noun ("exultation"), which personify the beer and tell us all we need to know about eagerness.

To understand the difference between a good adverb and a bad adverb, consider these two sentences: "She smiled happily" and "She smiled sadly." Which one works best? The first seems weak because "smiled" contains the meaning of "happily." On the other hand, "sadly" changes the meaning.

Author Kurt Vonnegut uses adverbs with the frequency of an appearance of Halley's comet. I had to read several pages of his book
Palm Sunday
before I found one. Invited to deliver a Sunday sermon, he concludes the homily, "I thank you for your sweetly faked attention." Once again, "sweetly" adjusts the meaning of "faked." Good adverb.

Remember the song "Killing Me Softly"? Good adverb. How about "Killing Me Fiercely"? Bad adverb.

I conclude with a disclaimer: The wealthiest writer in the world is J. K. Rowling, author of the Harry Potter series. She loves adverbs, especially when describing speech. On two pages of her first book, I found these attributions:

If you want to make more money than the Queen of England, maybe you should use more adverbs. If your aspirations, like mine, are more modest, use them sparingly.

1. Look through the newspaper for any word that ends with
-ly.
If it's an adverb, cross it out and read the new sentence aloud. Which version works better?

2. Do the same for your last three pieces of writing. Circle the adverbs, delete them, and decide if the new sentence is stronger or weaker.

3. Read through your adverbs again and mark those that modify the verb rather than intensify it.

4. Search for weak verb-adverb combinations. "He spoke softly" might become "He whispered" or "He mumbled." If you come upon a weak combination, try a stronger verb to see if it improves the sentence. 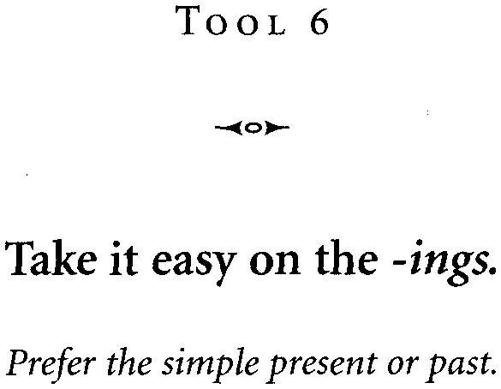 An editor from
Newsday
told me the story of how he tried to help a reporter revise the top of a story. As often happens, the editor knew that the lead paragraph could be improved, but not how. As he walked down the hallway, story in hand, he looked up to see the Brobdingnagian figure of Jimmy Breslin, who agreed to take a peek at the problem.

"Too many
-ings"
said the legendary columnist.

Can a writer use too many words that end with
-ing,
and why should that be a problem?

To put it another way, why is "Wish and hope and think and pray" stronger than "Wishin' and hopin and thinkin' and prayin' "? With apologies to Dusty Springfield, the answer resides in the history of English as an inflected language. An
inflection
is an element we add to a word to change its meaning. For example, we add -s or
-es
to a noun to indicate the plural. Add -5 or
-ed
to a verb, and we distinguish present action from the past.

Add
-ing
to a verb, and it takes on a progressive sense — a happening, as in this 1935 description by Richard Wright of the wild celebration after a Joe Louis boxing victory (the emphasis is mine): "Then they began
stopping
street cars. Like a cyclone
sweeping
through a forest, they went through them,
shouting, stamping
." The passage survives the weak verb "went through," depending on a simile and those
-ing
words to create a sense of spontaneous action.

Consider this opening to the mystery novel
The Big Sleep:

It was about eleven o'clock in the morning, mid October, with the sun not
shining
and a look of hard wet rain in the clearness of the foothills. I was
wearing
my powder-blue suit, with dark blue shirt, tie and display handkerchief, black brogues, black wool socks with dark blue clocks on them. I was neat, clean, shaved and sober, and I didn't care who knew it. I was everything the well-dressed private detective ought to be. I was
calling
on four million dollars.

Even though author Raymond Chandler uses the static "was" five times, he creates a sense of the present — the here and now — by the injection of
-ing
words.

So the writer should not worry about the occasional and strategic use of an
-ing
word, only its overuse when the simple present or past tense will suffice. Sometimes a single
-ing
creates the desired effect. In this passage from a biography of U.S. Senator Bob Dole, we learn of the care he received after a terrible war injury:

Bob held on, and made it through the operation. The fever disappeared and the other kidney worked, and by fall, they'd chipped away the whole cast. Now they
were trying
to get him out of bed. They hung his legs over the edge of the mattress, but it made him weak with fatigue. It took days to get him on his legs, and then he shook so, with the pain and the strangeness, they had to set him back in bed.

Using the simple past tense, Richard Ben Cramer creates a scene that is vivid, clear, and dramatic. There, in the middle, rests a single exception ("they were trying") to describe immediate and continuous effort.

Let me attempt to write a paragraph with too many
-ings:

Suffering
under the strain of months of
withering
attacks, reservists stationed in Iraq are
complaining
to family members about the length of their tours of duty, and
lobbying
their congressional representatives about
bringing
more troops home soon.

There is nothing right or wrong about this sentence. It's just heavy on
-ings,
five of them, expressing a variety of syntactic forms:

• "Withering" is an adjective, modifying "attacks."

• "Complaining" and "lobbying" are progressive forms of verbs.

Before I try to improve this passage, let me offer two reasons why -ing weakens a verb:

1. When I add
-ing,
I add a syllable to the word, which does not happen, in most cases, when I add -s or
-ed.
Let's take the verb
to trick.
First, I'll add -s, then
-ed,
giving me
tricks
and
tricked.
Neither change alters the root effect of the verb.
Tricking,
with its extra syllable, sounds like a different word.

2. The
-ing
words begin to resemble each other. Walking and running and cycling and swimming are all good forms of exercise, but I prefer to point out that my friend Kelly likes to walk, run, cycle, and swim.

Reservists stationed in Iraq have suffered months of withering attacks. They have complained to family members about the lengths of their tours of duty and lobbied Congress to bring more troops home soon.

I cannot argue that this revision represents a significant improvement over the earlier version; it's perhaps a little cleaner and more direct. But now I know that this tool gives me choices I did not know I had. In the same way I test adverbs, I can now test my
-ings.

Since I've learned this tool, I notice how I appreciate passages that are
-ing
lite. Listen to Kathleen Norris in
Dakota:

Like many who have written about Dakota, I'm invigorated by the harsh beauty of the land and feel a need to tell the stories that come from its soil.
Writing
is a solitary act, and ideally, the Dako-tas might seem to provide a writer with ample solitude and quiet. But the frantic social activity in small towns conspires to silence a person. There are far fewer people than jobs to fill. Someone must be found to lead the church choir or youth group, to bowl with the league, to coach a softball team or little league, to run a Chamber of Commerce or club committee. Many jobs are vital: the volunteer fire department and ambulance service, the domestic violence hotline, the food pantry. All too often a kind of Tom Sawyerism takes over, and makes of adult life a perpetual club. Imagine
spending
the rest of your life at summer camp.

In a paragraph of 151 words, Norris gives us only two
-ings.
Not too many.

1. Read your recent work. Circle any word that ends with
-ing.
What have you discovered? Do you use too many -
ings?

2. If
so, revise a few passages. See if you can knock off some
-ings,
using, instead, the simple present or past.

3. Notice the number of
-ings
in the work you admire.

4. If you come across a difficult passage to read or write, test it for
-ings. 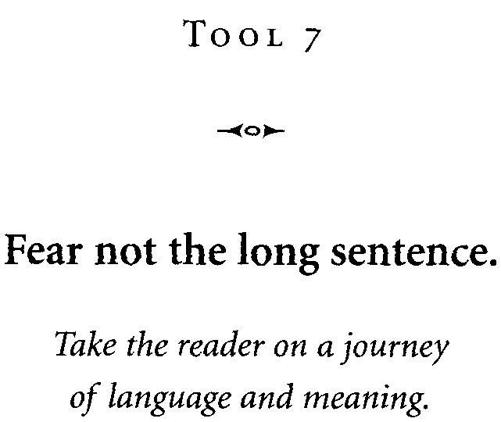 Everyone fears the long sentence. Editors fear it. Readers fear it. Most of all, writers fear it. Even I fear it. Look. Another short one. Shorter. Fragments. Frags. Just letters. F ... f... f. .. f. Can I write a sentence without words? Just punctuation?... #:!?

Write what you fear. Until the writer tries to master the long sentence, she is no writer at all, for while length makes a bad sentence worse, it can make a good sentence better.