Amy Fusselman provides an example with the first sentence of her novel,
The Pharmacist's Mate:
"Don't have
sex on a boat
unless you want to
get pregnant."
The most intriguing words come near the beginning and at the end. Gabriel Garcia Marquez uses this strategy at the opening of
One Hundred Years of Solitude
to dazzling effect: "Many years later,
as he faced the firing squad,
Colonel Aureliano Buendia was to remember that distant afternoon when his father took him to
discover ice."

What applies to the sentence also applies to the paragraph, as Alice Sebold demonstrates in this passage:
"In the tunnel where I was raped,
a tunnel that was once an underground entry to an amphitheater, a place where actors burst forth from underneath the seats of a crowd, a girl had been murdered and dismembered. I was told this story by the police. In comparison, they said, I was
lucky."
That final word resonates with such pain and power that Sebold turns it into the title of her memoir,
Lucky.

These tools of emphasis are as old as rhetoric itself. Near the end of Shakespeare's famous tragedy, a character announces to Macbeth: "The Queen, my lord, is dead." This astonishing example of the power of emphatic word order is followed by one of the darkest passages in all of literature. Macbeth says:

She should have died hereafter;

There would have been a time for such a word.

Tomorrow, and tomorrow, and tomorrow Creeps in this petty pace from day to day, To the last syllable of recorded time; And all our yesterdays have lighted fools The way to dusty death. Out, out, brief candle! Life's but a walking shadow, a poor player That struts and frets his hour upon the stage And then is heard no more. It is a tale Told by an idiot, full of sound and fury, Signifying nothing.

The poet has one great advantage over those who write prose. He knows where the line will end. He gets to emphasize a word at the end of a line, a sentence, a paragraph. We prose writers make do with the sentence and the paragraph — signifying something.

2. With a pencil in hand, read an essay you admire. Circle the first and last words in each paragraph.

3. Do the same for recent examples of your work. Revise sentences so that powerful and interesting words, which may be hiding in the middle, appear near the beginning and at the end.

4. Survey your friends to get the names of their dogs. Write these in alphabetical order. Imagine that this list appears in a story. Play with the order of the names. Which should go first? Which last? Why? 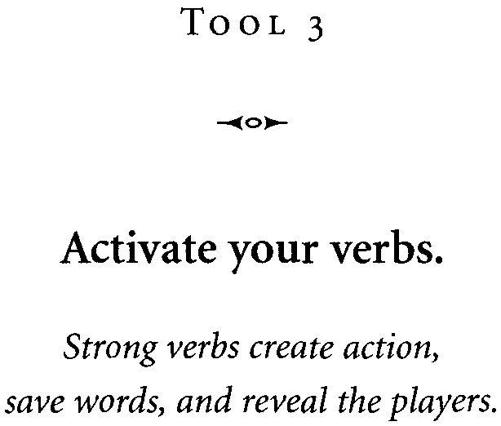 President John F. Kennedy testified that a favorite book was
From Russia with Love,
the 1957 James Bond adventure by Ian Fleming. This choice revealed more about JFK than we knew at the time and created a cult of 007 that persists to this day.

The power of Fleming's prose flows from active verbs. In sentence after sentence, page after page, England's favorite secret agent, or his beautiful companion, or his villainous adversary, performs the action of the verb (the emphasis is mine):

Bond
climbed
the few stairs and
unlocked
his door and
locked
and
bolted
it behind him. Moonlight
filtered
through the curtains. He
walked
across and
turned
on the pink-shaded lights on the dressing-table. He
stripped
off his clothes and
went
into the bathroom and
stood
for a few minutes under the shower.... He
cleaned
his teeth and
gargled
with a sharp mouthwash to get rid of the taste of the day and
turned
off the bathroom light and
went
back into the bedroom....

Bond
gave
a shuddering yawn. He
let
the curtains drop back into place. He
bent
to switch off the lights on the dressing-table. Suddenly he
stiffened
and his heart
missed
a beat.

There had been a nervous giggle from the shadows at the back of the room. A girl's voice
said,
"Poor Mister Bond. You must be tired. Come to bed."

In writing this passage, Fleming followed the advice of his countryman George Orwell, who wrote of verbs: "Never use the passive where you can use the active."

I learned the distinction between active and passive voice as early as fifth grade. Thank you, Sister Katherine William. I failed to learn, until much later, why that distinction mattered. But let me first correct a popular misconception. The voice of verbs (active or passive) has nothing to do with the tense of verbs. Writers sometimes ask, "Is it ever OK to write in the passive tense?"
Tense
defines action within time —
when
the verb happens — the present, past, or future.
Voice
defines the relationship between subject and verb — who does what.

• If the subject performs the action of the verb, we call the verb
active.

• If the subject receives the action of the verb, we call the verb
passive.

• A verb that is neither active nor passive is a
linking verb,
a form of the verb
to be.

All verbs, in any tense, fit into one of those three baskets.

Waiflike, draped in a pale blue veil, Madina, 20,
sits
on her hospital bed, bandages covering the terrible, raw burns on her neck and chest. Her hands
tremble.
She
picks
nervously at the soles of her feet and confesses that three months earlier she
set
herself on fire with kerosene.

Both Fleming and Gall use active verbs to power their narratives, but notice an important difference between them. While Fleming uses the past tense to narrate his adventure, Gall prefers the present. This strategy immerses readers in the immediacy of experience, as if we were sitting — right now — beside the poor woman in her grief.

Both Fleming and Gall avoid verb qualifiers that attach themselves to standard prose like barnacles to the hull of a ship:

Scrape away these crustaceans during revision, and the ship of your prose will glide toward meaning with speed and grace.

The earnest writer can overuse a writing tool. If you shoot up your verbs with steroids, you risk creating an effect that poet Donald Hall derides as "false color," the stuff of adventure magazines and romance novels. Temperance controls the impulse to overwrite.

And in my memory I can still
feel
the hope that
beat
in me that night. I
clung
to this hope, day after day, night after night, year after year. I would
watch
my mother lying in her bed, babbling to herself as she
sat
on the sofa. And yet I
knew
that this, the worst possible thing, would one day
stop.
I still
saw
bad things in my mind, but now I
found
ways to change them. I still
heard
Mrs. Sorci and Teresa having terrible fights, but I
saw
something else.... I
saw
a girl complaining that the pain of not being seen was unbearable.

Ian Fleming's verbs describe external action and adventure; Amy Tan's verbs capture internal action and emotion. But action can also be intellectual, in the force and power of an argument, as Albert Camus demonstrates in
The Rebel:

Notice that even with all the active verbs in that passage, Camus does not pass on the passive when he needs it ("he is frustrated"), which brings us to the next tool.

1. Verbs fall into three categories: active, passive, and forms of the verb
to be.
Review your writing and circle verb forms with a pencil. In the margins, categorize each verb.

2. Convert passive and
to be
verbs into the active. For example, "It was her observation that" can become "She observed."

3. In your own work and in the newspaper, search for verb qualifiers and see what happens when you cut them.

The Edge on the Sword by Rebecca Tingle
A First Rate Tragedy by Diana Preston
Flirtinis with Flappers by Marianne Mancusi
Crawling Between Heaven And Earth by Sarah A. Hoyt
The Possession of Mr Cave by Matt Haig
Love Letters by Larry, Jane
Grilled Rye Murder: Book 16 in The Darling Deli Series by Patti Benning
Taste of Romance by Darlene Panzera
Forever Lost: Becoming Elena - Book Two by Melody Anne
Play Dead by Leslie O'kane
Our partner