Fisher's restraint stands in sharp contrast to the hallucinatory wordplay in
Act of the Damned
by Antonio Lobo Antunes:

At eight a.m. on the second Wednesday of September, 1975, the alarm clock yanked me up out of my sleep like a derrick on the wharf hauling up a seaweed-smeared car that didn't know how to swim. I surfaced from the sheets, the night dripping from my pajamas and my feet as the iron claws deposited my arthritic cadaver on to the carpet, next to the shoes full of yesterday's smell. I rubbed my fists into my battered eyes and felt flakes of rust fall from the corners. Ana was wrapped, like a corpse in the morgue, in a blanket on the far side of the bed, with only her broomhead of hair poking out. A pathetic shred of leather from a dead heel tumbled off the mattress. I went to the bathroom to brush my teeth and the heartless mirror showed me the damage the years had wrought, as on an abandoned chapel.

Even those who prefer a much plainer style need an occasional swim in a surrealistic sea of language — if only to cleanse us of our word complacency.

All of us possess a reading vocabulary as big as a lake but draw from a writing vocabulary as small as a pond. The good news is that the acts of searching and gathering always expand the number of usable words. The writer sees and hears and records. The seeing leads to language.

"The writer must be able to feel words intimately, one at a time," writes poet Donald Hall in
Writing Well.
"He must also be able to step back, inside his head, and see the flowing sentence. But he starts with the single word." Hall celebrates writers who
"are original, as if seeing a thing for the first time;
yet they report their vision in a
language that reaches the rest of us.
For the first quality the writer needs imagination; for the second he needs skill.... Imagination without skill makes a lively chaos; skill without imagination, a deadly order."

1. Read several stories in today's newspaper. Circle any surprising word, especially one you are not used to seeing in the news.

2. Write a draft with the intention of unleashing your writing vocabulary. Show this draft to test readers and interview them about your word choice and their level of understanding. Share your findings with others.

3. Read the work of a writer you admire, paying special attention to word choice. Circle any signs of playfulness by the writer, especially when the subject matter is serious.

4. Find a writer, perhaps a poet, whose work you read as an inspiration for writing. Circle the words that interest you. Even if you know their meaning, look them up in a historical lexicon, such as the
Oxford English Dictionary.
Find their etymologies. Try to locate their first known use in written English. 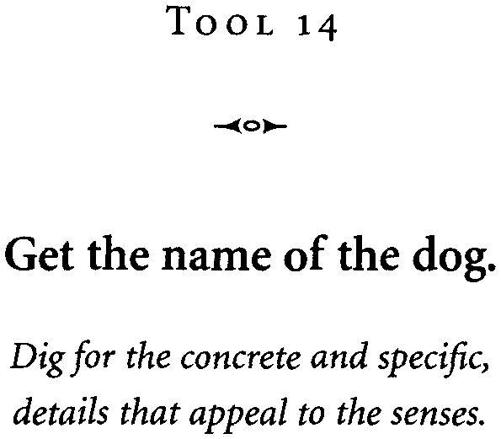 Novelist Joseph Conrad once described his task this way: "by the power of the written word to make you hear, to make you feel — it is, before all, to make you
see."
When Gene Roberts, a great American newspaper editor, broke in as a cub reporter in North Carolina, he read his stories aloud to a blind editor who would chastise young Roberts for not making him see.

When details of character and setting appeal to the senses, they create an experience for the reader that leads to understanding. When we say "I see," we most often mean "I understand." Inexperienced writers may choose the obvious detail, the man puffing on the cigarette, the young woman chewing on what's left of her fingernails. Those details fail to tell — unless the man is dying of lung cancer or the woman is anorexic.

At the
St. Petersburg Times,
editors and writing coaches warn reporters not to return to the office without "the name of the dog." That reporting task does not require the writer to use the detail in the story, but it reminds the reporter to keep her eyes and ears opened. When Kelley Benham wrote a story about a ferocious rooster that attacked a toddler, she not only got the name of the rooster, Rockadoodle Two, but also the names of his parents, Rockadoodle and one-legged Henny Penny. (I cannot explain why it matters that the offending rooster's mother had only one leg, but it does.)

Before the execution of a serial killer, reporter Christopher Scanlan flew to Utah to visit the family of one of the murderer's presumed victims. Eleven years earlier, a young woman left her house and never returned. Scanlan found the detail that told the story of the family's enduring grief. He noticed a piece of tape over the light switch next to the front door:

BOUNTIFUL, Utah — Belva Kent always left the front porch light on when her children went out at night. Whoever came home last turned it off, until one day in 1974 when Mrs. Kent told her family: "I'm going to leave that light on until Deb comes home and she can turn it off."

The Kents' porch light still burns today, night and day. Just inside the front door, a strip of tape covers the switch.

Here's the key: Scanlan
saw
the taped-over switch and asked about it. His curiosity, not his imagination, captured the great detail.

The quest for such details has endured for centuries, as any historical anthology of reportage will reveal. British scholar John Carey describes these examples from his collection
Eyewitness to History:

This book is ... full of unusual or indecorous or incidental images that imprint themselves scaldingly on the mind's eye: the ambassador peering down the front of Queen Elizabeth I's dress and noting the wrinkles;... the Tamil looter at the fall of Kuala Lumpur upending a carton of snowy Slazenger tennis balls.... Pliny watching people with cushions on their heads against the ash from the volcano; Mary, Queen of Scots, suddenly aged in death, with her pet dog cowering among her skirts and her head held on by one recalcitrant piece of gristle; the starving Irish with their mouths green from their diet of grass.

(I could find no surviving record of the name of Mary's dog, but learned that it was a Skye terrier, a Scottish breed famous for its loyalty and valor. Then a kind reader, Annette Taylor, messaged me from New Zealand to reveal that the name of the "wee doggie" was Geddon. It was a detail she remembered from helping her daughter with a term paper.)

The good writer uses telling details, not only to inform, but to persuade. In 1963 Gene Patterson wrote a column mourning the murders of four girls in the bombing of a church in Birmingham, Alabama:

A Negro mother wept in the street Sunday morning in front of a Baptist Church in Birmingham. In her hand she held a shoe, one shoe, from the foot of her dead child. We hold that shoe with her. (from the
Atlanta Constitution)

Patterson will not permit white southerners to escape responsibility for the murder of those children. He fixes their eyes and ears, forcing them to hear the weeping of the grieving mother, and to see the one small shoe. The writer makes us empathize and mourn and understand. He makes us see.

The details that leave a mark are those that stimulate the senses. Feel how Cormac McCarthy begins the novel
All the Pretty Horses:

The candleflame and the image of the candleflame caught in the pierglass twisted and righted when he entered the hall and again when he shut the door. He took off his hat and came slowly forward. The floorboards creaked under his boots. In his black suit he stood in the dark glass where the lilies leaned so palely from their waisted cutglass vase. Along the cold hallway behind him hung the portraits of forebears only dimly known to him all framed in glass and dimly lit above the narrow wainscoting.

Such prose demands the close attention we'd apply to poetry, starting with that glittering collection of merged nouns ("candleflame," "pierglass," "cutglass," "candlestub," "thumbprint"). More powerful is McCarthy's appeal to the senses. He not only gives us color — black and yellow — for our eyes, but also gifts for our other senses: the smell of burning candles, the sound of creaking floorboards, the feel of wax and oak.

1. Read today's newspaper looking for passages that appeal to the senses. Do the same with a novel.

2. The name of my dog is Rex — and he is the king. Ask a group of colleagues or students to share stories about the names of their pets. Which names reveal the most about the personalities of the owners?

3. With some friends, study the collected work of an outstanding photojournalist. Pretend you are writing a story about the scene captured in a photo. Which details might you select, and in what order would you render them?

4. Most writers appeal to the sense of sight. In your next work, look for opportunities to use details of smell, sound, taste, and touch. 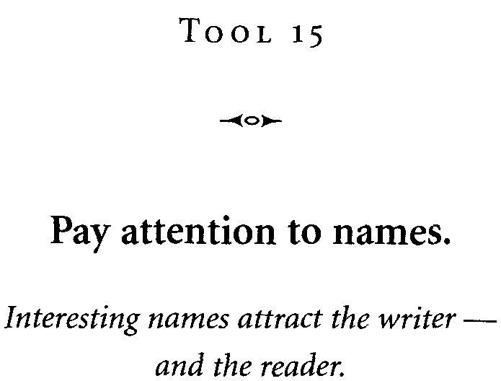 A fondness for interesting names is not a tool, strictly speaking, but a condition, a sweet literary addiction. I once wrote a story about the name Z. Zyzor, the last name listed in the St. Petersburg phone directory. The name turned out to be a fake, made up long ago by postal workers so that family members could call them in an emergency, just by looking up the last name in the phone book. What captured my attention was the name. I wondered what
Z
stood for: Zelda Zyzor? Zorro Zyzor? And what was it like to go through life last in line?

But the best names seem, as if by magic, attached to real characters who wind up making news. The best reporters recognize and take advantage of coincidence between name and circumstance. A story in the
Baltimore Sun
revealed the sad details of a woman whose devotion to her man led to the deaths of her two young daughters. The mother was Sierra Swann, who, in spite of a lyrical name evoking natural beauty, came apart in a grim environment, "where heroin and cocaine are available curbside beneath the blank stares of boarded-up windows." The writer traced her downfall, not to drugs, but to an "addiction to the companionship of Nathaniel Broadway." Sierra Swann. Nathaniel Broadway. A fiction writer could not invent names more apt and interesting.