My favorite Tom Wolfe essay from the early days of the New Journalism movement is "A Sunday Kind of Love," named after a romantic ballad of the period. The events described take place one morning in a New York subway station on a Thursday, not a Sunday. Wolfe sees and seizes a moment of youthful passion on the city underground to redefine urban romance.

Love! Attar of libido in the air! It is 8:45 A.M. Thursday morning in the IRT subway station at 50th Street and Broadway and already two kids are hung up in a kind of herringbone weave of arms and legs, which proves, one has to admit, that love is not
confined
to Sunday in New York.

Still the odds! All the faces come popping in clots out of the Seventh Avenue local, past the King Size Ice Cream machine, and the turnstiles start whacking away as if the world were breaking up on the reefs. Four steps past the turnstiles everybody is already backed up haunch to paunch for the climb up the ramp and the stairs to the surface, a great funnel of flesh, wool, felt, leather, rubber and steaming alumicron, with the blood squeezing through everybody's old sclerotic arteries in hopped-up spurts from too much coffee and the effort of surfacing from the subway at the rush hour. Yet there on the landing are a boy and a girl, both about eighteen, in one of those utter, My Sin, backbreaking embraces.

All round them, ten, scores, it seems like hundreds, of faces and bodies are perspiring, trooping and bellying up the stairs with arterio-sclerotic grimaces past a showcase full of such novel items as Joy Buzzers, Squirting Nickels, Finger Rats, Scary Tarantulas and spoons with realistic dead flies on them, past Fred's barbershop, which is just off the landing and has glossy photographs of young men with the kind of baroque haircuts one can get in there, and up onto 50th Street into a madhouse of traffic and shops with weird lingerie and gray hair-dyeing displays in the windows, signs for free teacup readings and a pool-playing match between the Playboy Bunnies and Downey's Showgirls, and then everybody pounds on toward the Time-Life Building, the Brill Building or NBC.

Has any reader ever experienced a more glorious long sentence, a more rollicking evocation of underground New York, a more dazzling 128 words from capital letter to period? If you find one, I'd like to read it.

A close reading of Wolfe suggests some strategies to achieve mastery of the long sentence:

• It helps if subject and verb of the main clause come early in the sentence.

• Use the long sentence to describe something long. Let form follow function.

• It helps if the long sentence is written in chronological order.

• Use the long sentence in variation with sentences of short and medium length.

• Use the long sentence as a list or catalog of products, names, images.

• Long sentences need more editing than short ones. Make every word count. Even. In. A. Very. Long. Sentence.

Writing long sentences means going against the grain. But isn't that what the best writers do? In his novel
The Rings of Saturn,
W. G. Sebald uses the long sentence to explain — and mirror — the antique prose style of English essayist Sir Thomas Browne:

In common with other English writers of the seventeenth century, Browne wrote out of the fullness of his erudition, deploying a vast repertoire of quotations and the names of authorities who had gone before, creating complex metaphors and analogies, and constructing labyrinthine sentences that sometimes extend over one or two pages, sentences that resemble processions or a funeral cortege in their sheer ceremonial lavishness. It is true that, because of the immense weight of the impediments he is carrying, Browne's writing can be held back by the force of gravitation, but when he does succeed in rising higher and higher through the circles of his spiralling prose, borne aloft like a glider on warm currents of air, even today the reader is overcome by a sense of levitation.

In the 1940s Rudolf Flesch described the effects that made a sentence "easy" or "hard" to read. According to Flesch, an 1893 study illuminated the shrinking English sentence: "The average Elizabethan written sentence ran to about 45 words; the Victorian sentence to 29; ours to 20 and less." Flesch used sentence length and syllable count as factors in his readability studies, an arithmetic once derided by E. B. White in his essay "Calculating Machine." "Writing is an act of faith," wrote White, "not a trick of grammar."

The good writer must believe that a good sentence, short or long, will not be lost on the reader. And although Flesch preached the value of the good eighteen-word sentence, he praised long sentences written by such masters as Joseph Conrad. So even for old Rudolf, a long sentence, well crafted, was not a sin against the Flesch.

1. Keep an eye out for well-crafted long sentences. Test them in context, using the criteria above.

2. During revision, most journalists take a longish sentence and break it up for clarity. But writers also learn to combine sentences for good effect. Review examples of your recent work. Combine shorter sentences for a richer variety of sentence structures and lengths.

3. Here's a passage from the novel
The Diving Bell and the Butterfly
by Jean-Dominique Bauby:

I am fading away. Slowly but surely. Like the sailor who watches the home shore gradually disappear, I watch my past recede. My old life still burns within me, but more and more of it is reduced to the ashes of memory.

Revise this excerpt into a single sentence.

4. The best long sentences flow from good research and reporting. Review Wolfe's sentences above. Notice the details that come from direct observation and note taking. The next time you report in the field, look for scenes and settings that lend themselves to description in a long sentence.

5. Sentences can be divided into four structural categories: simple (one clause); complex (main clause plus dependent clauses); compound (more than one main clause); compound-complex. But a long sentence does not have to be compound or complex. It can be simple:

That thirty-four-word sentence is a simple sentence with one main clause ("A tornado ripped"). In this case the
-ings
help. Survey the contents of your purse, your wallet, or a favorite junk drawer. Write a long simple sentence to describe what's inside. 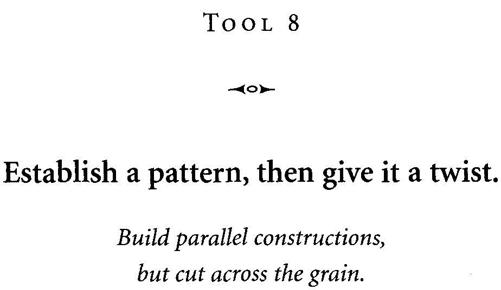 Writers shape up their prose by building parallel structures in their words, phrases, and sentences. "If two or more ideas are parallel," writes Diana Hacker in
A Writer's Reference,
"they are easier to grasp when expressed in parallel grammatical form. Single words should be balanced with single words, phrases with phrases, clauses with clauses."

The effect is most obvious in the words of great orators, such as Martin Luther King Jr. (the emphasis is mine):

Notice how King builds a crescendo from the repetition of words and grammatical structures, in this case a series of prepositional phrases with a noun designating mountains and an adjective defining majesty.

"Use parallels wherever you can," wrote Sheridan Baker in
The Practical Stylist,
"equivalent thoughts demand parallel constructions." Just after reading Baker, I stumbled on an essay by one of my favorite English authors, G. K. Chesterton, who wrote detective stories, books on religion, and literary essays early in the twentieth century. His more mannered style highlights the parallel structures in his sentences: "With
my
stick and
my
knife,
my
chalks and
my
brown paper, I went out on to the great downs." That sentence strides across the page on the legs of two parallel constructions: the fourfold repetition of "my," and the pair of pairs connected by "and."

The late Neil Postman argued that the problems of society could not be solved by information alone. He shaped his arguments around a set of parallel propositions:

By repeating those conditional "If" clauses and ending four consecutive sentences with "insufficient information," Postman sounds a drumbeat of language, a drumline of persuasion.

Suddenly I began to see parallels everywhere. Here is a passage from
The Plot Against America,
a novel by Philip Roth. In one of his trademark long sentences, Roth describes Jewish American working-class life in the 1940s:

In this dazzling inventory of work, I count nineteen parallel phrases, all building on "washing laundry." (And look at all those
-ings.
) But here's Roth's secret: what makes the passage sing is the occasional variation of the pattern, such as the phrase "cleaning sinks, tubs, toilets, and stoves." Roth could have written, "The men worked fifty, sixty, seventy hours a week," a perfectly parallel string of adjectives. Instead, he gives us "even seventy or more." By breaking the pattern, he lends more emphasis to the final element.

A pure parallel construction would be "Boom, boom, boom." Parallelism with a twist gives us "Boom, boom, bang." A pattern with variation created these now familiar phrases and titles:

Nebula Awards Showcase 2010 by Bill Fawcett
Riddley Walker by Russell Hoban
Eraser Crimson by Megan Keith, Renee Kubisch
Eyes of Crow by Jeri Smith-Ready
A Castle of Sand by Bella Forrest
IN FOR A PENNY (The Granny Series) by Naigle, Nancy, Browning, Kelsey
The Children of Fear by R.L. Stine
The Hook-up Doctor's Guide by Nyrae Dawn
Cinderella, The Return of Genevieve by Carter, Elektra
The Chameleon's Shadow by Minette Walters
Our partner