The Commission calls for a "revolution" in the way Americans think about writing. The time is right. Students now face high-stakes writing tests to advance in school and enter college. But technology stands on our side, easing the burdens of drafting and revision. I wrote my first book in 1985 on a Royal Standard typewriter. A machine just like it sits in my office, a museum piece. Now young writers use cell phones to communicate in the telegraphic and acronymic language of instant messages; words flash around the world with breathtaking speed. These new writers have created millions of Web logs and Web sites, becoming publishers of their own work.

No doubt, the standards expressed in these new forms are looser than those suggested by Strunk and White. The voices are more casual, the approaches more experimental, and the per-sonae of the authors more elusive. These new voices cross old boundaries and command attention, but who would argue that the quality of writing online is what it could be? As these new writers mature, they will need writing tools to perfect their work.

We need lots of writing tools to build a nation of writers. Here are fifty of them, one for every week of the year. You get two weeks for vacation. 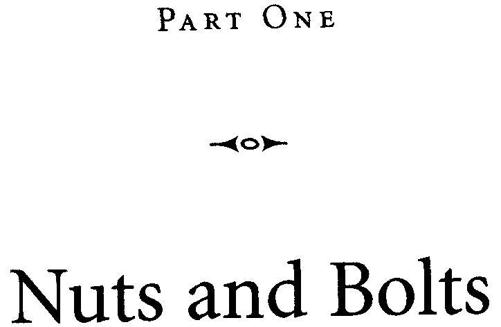 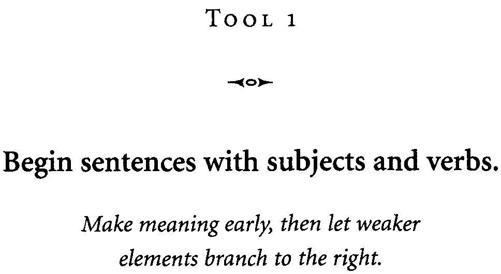 Imagine each sentence you write printed on the world's widest piece of paper. In English, a sentence stretches from left to right. Now imagine this. A writer composes a sentence with subject and verb at the beginning, followed by other subordinate elements, creating what scholars call a
right-branching sentence.

I just created one. Subject and verb of the main clause join on the left ("a writer composes") while all other elements branch to the right. Here's another right-branching sentence, written by Lydia Polgreen as the lead of a news story in the
New York Times:

That first sentence contains thirty-seven words and ripples with action. The sentence is so full, in fact, that it threatens to fly apart like an overheated engine. But the writer guides the reader by capturing meaning in the first three words: "Rebels seized control." Think of that main clause as the locomotive that pulls all the cars that follow.

Master writers can craft page after page of sentences written in this structure. Consider this passage by John Steinbeck from
Cannery Row,
describing the routine of a marine scientist named Doc (the emphasis is mine):

He didn't need
a clock.
He had been working
in a tidal pattern so long that he could feel a tide change in his sleep. In the dawn
he awakened,
looked out through the windshield and saw that the water was already retreating down the bouldery flat.
He drank
some hot coffee, ate three sandwiches, and had a quart of beer.

The tide goes out
imperceptibly.
The boulders show
and seem to rise up and the ocean recedes leaving little pools, leaving wet weed and moss and sponge, iridescence and brown and blue and China red. On the bottoms
lie the incredible refuse
of the sea, shells broken and chipped and bits of skeleton, claws, the whole sea bottom a fantastic cemetery on which the living scamper and scramble.

Steinbeck places subject and verb at or near the beginning of each sentence. Clarity and narrative energy flow through the passage, as one sentence builds on another. He avoids monotony by including the occasional brief introductory phrase ("In the dawn") and by varying the lengths of his sentences, a writing tool we will consider later.

Subject and verb are often separated in prose, usually because we want to tell the reader something about the subject before we get to the verb. This delay, even for good reasons, risks confusing the reader. With care, it can work:

The stories
about my childhood, the ones that stuck, that got told and retold at dinner tables, to dates as I sat by red-faced, to my own children by my father later on,
are
stories of running away.

So begins Anna Quindlen's memoir
How Reading Changed My Life,
a lead sentence with thirty-one words between subject and verb. When the topic is more technical, the typical effect of separation is confusion, exemplified by this clumsy effort:

A bill
that would exclude tax income from the assessed value of new homes from the state education funding formula
could mean
a loss of revenue for Chesapeake County schools.

Eighteen words separate the subject, "bill," from its weak verb, "could mean," a fatal flaw that turns what could be an important civic story into gibberish.

If the writer wants to create suspense, or build tension, or make the reader wait and wonder, or join a journey of discovery, or hold on for dear life, he can save subject and verb of the main clause until later. As I just did.

Kelley Benham, a former student of mine, reached for this tool when called on to write the obituary of Terry Schiavo, the woman whose long illness and controversial death became the center of an international debate about the end of life:

Before the prayer warriors massed outside her window, before gavels pounded in six courts, before the Vatican issued a statement, before the president signed a midnight law and the Supreme Court turned its head,
Terri Schiavo was
just an ordinary girl, with two overweight cats, an unglamorous job and a typical American life.

By delaying the main subject and verb, the writer tightens the tension between a celebrated cause and an ordinary girl.

This variation works only when most sentences branch to the right, a pattern that creates meaning, momentum, and literary power. "The brilliant
room collapses
," writes Carol Shields in
The Stone Diaries,

leaving a solid block of darkness. Only her
body survives
, and the problem of what to do with it.
It has not turned
to dust. A bright, droll, clarifying
knowledge comes over
her at the thought of her limbs and organs transformed to biblical dust or even funereal ashes. Laughable.

1. Read through the
New York Times
or your local newspaper with a pencil in hand. Mark the locations of subjects and verbs.

2. Do the same with examples of your writing.

3. Do the same with a draft you are working on now.

4. The next time you struggle with a sentence, rewrite it by placing subject and verb at the beginning.

5. For dramatic variation, write a sentence with subject and verb near the end.

Strunk and White's
The Elements of Style
advises the writer to "place emphatic words in a sentence at the end," an example of its own rule. The most emphatic word appears at "the end." Application of this tool will improve your prose in a flash.

For any sentence, the period acts as a stop sign. That slight pause in reading magnifies the final word, an effect intensified at the end of a paragraph, where final words often adjoin white space. In a column of type, a reader's eyes are likewise drawn to the words next to the white space. Those words shout, "Look at me!"

Emphatic word order helps the writer solve the thorniest problems. Consider this opening for a story in the
Philadelphia Inquirer.
The writer, Larry King, must make sense of three powerful elements: the death of a United States senator, the collision of aircraft, and a tragedy at an elementary school:

Seven people died: Heinz, four pilots and two first-grade girls at play outside the school. At least five people on the ground were injured, three of them children, one of whom was in critical condition with burns.

Flaming and smoking wreckage tumbled to the earth around Merion Elementary School on Bowman Avenue at 12:19 p.m., but the gray stone building and its occupants were spared. Frightened children ran from the playground as teachers herded others outside. Within minutes, anxious parents began streaming to the school in jogging suits, business clothes, house-coats. Most were rewarded with emotional reunions, amid the smell of acrid smoke.

On most days, any of the three elements would lead the paper. Combined, they form an overpowering news tapestry, one that reporter and editor must handle with care. What matters most in this story? The death of a senator? A spectacular crash? The deaths of children?

In the first paragraph, the writer chooses to mention the senator and the crash up front, and saves "elementary school playground" for the end. Throughout the passage, subjects and verbs come early — like the locomotive and coal car of an old railroad train — saving other interesting words for the end — like a caboose.

Consider also the order in which the writer lists the anxious parents, who arrive at the school in "jogging suits, business clothes, house-coats." Any other order weakens the sentence. Placing "house-coats" at the end builds the urgency of the situation: parents racing from their homes dressed as they are.

Putting strong stuff at the beginning and end helps writers hide weaker stuff in the middle. In the passage above, notice how the writer hides the less important news elements — the who and the when ("Lower Merion Township yesterday") — in the middle of the lead. This strategy also works for attributing quotations:

"It was one horrible thing to watch," said Helen Amadio, who was walking near her Hampden Avenue home when the crash occurred. "It exploded like a bomb. Black smoke just poured."