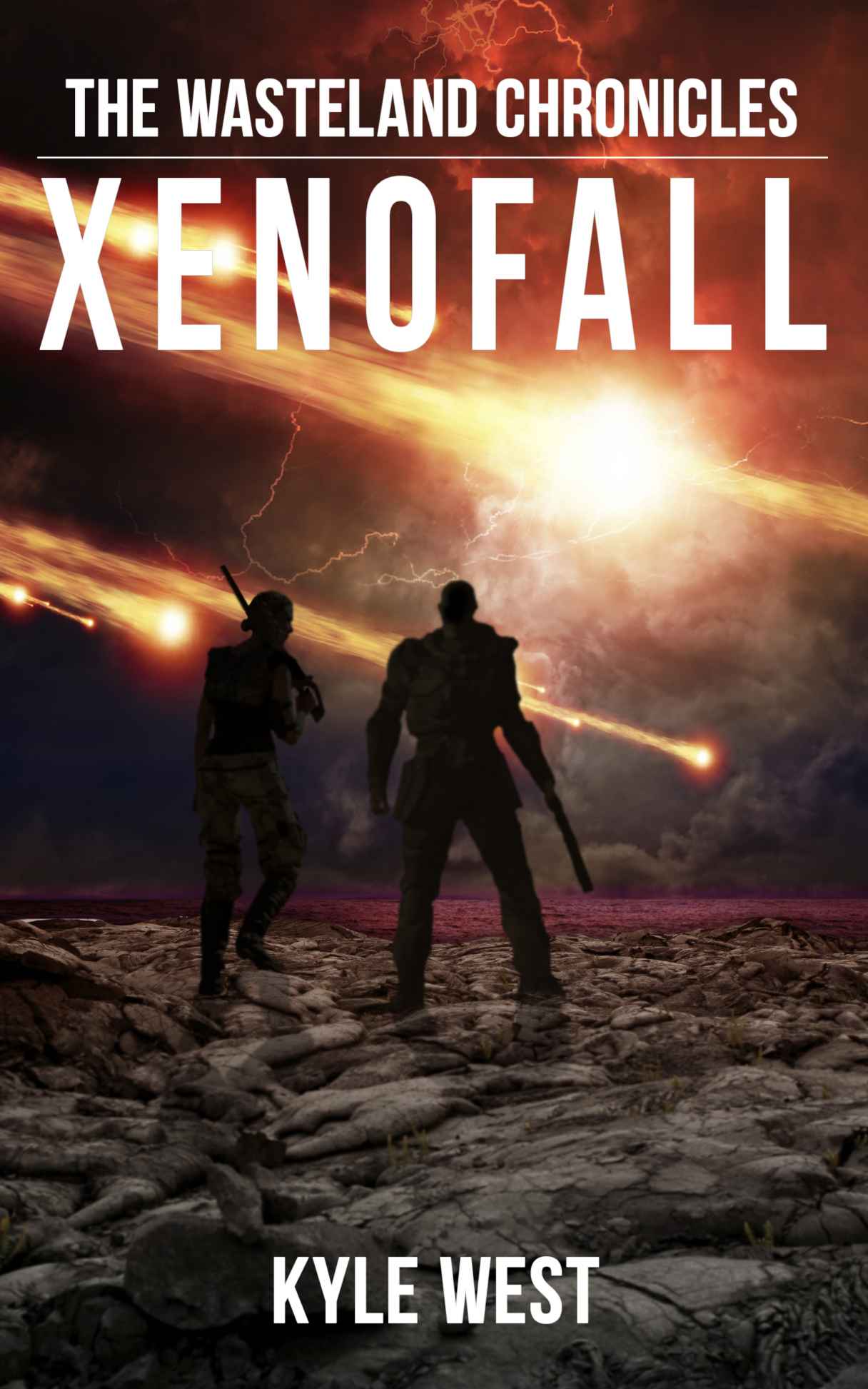 The surrounding fungus emanated an ethereal glow, and the air was warm and sticky. Our squad sat with backs to a large boulder. Stilted trees twisted from the xenofungal bed. In the distance, a crawler shrieked.

Makara and I, along with four other Angels, advanced up the hill at a crouch, the fungus squishing beneath our boots.
Perseus
hovered high in the clouds, piloted by Anna and ready to descend at a moment’s notice. We were in the Great Blight, after all; things could change in an instant.

Three meteorites had fallen near 3:00this location in Central Texas, and Makara wanted to inspect them up close. The one we were after had impacted not two hours ago, but Makara wanted to investigate all three. So, she had split us into three teams – Samuel and Ruth led one, while Julian and Michael led the other. Makara and I headed this one, and Grudge had come along for additional support.

At last, we made it to the top of the hill. Below, the Blighted valley spread, glowing in the night. A thin stream wove between the hills, its flow and gurgle audible even with distance. Judging by its quick flow, it was water rather than
Radaskim
ichor. In the center of that stream was a large boulder, out of the center of which radiated a molten glow. Steam hissed from the rock’s sides where the water touched it.

“There it is,” Makara said.

She raised a pair of binoculars enhanced with night vision to her eyes. I wished I could get a look, but I had to make do with my own eyes. Xenotrees grew thick on the stream’s banks and alien chirps echoed in the hills. The clouds hung low, blocking starlight, though the bioluminescence of the vegetation provided ample light.

Makara lowered the binoculars. “Can’t see a damn thing. We’ll have to get closer.”

“Maybe,” Makara said. “But we’re not finding anything out up here, that’s for damn sure.”

“Maybe we should give it a bit more time?” one of the other men asked.

The wind blew, warm and humid, like the exhalation of a beast. Being in the Great Blight was like being inside a living thing. That suffocating feeling went beyond the physical; it was like a thousand eyes watching your every move. The longer we remained, the more the
Radaskim
became aware of our presence.

It wouldn’t be long until Askala noticed us as well.

The meteors had fallen all over America, and maybe even all over the world. We were investigating the ones in Texas because they were far from our usual action, and hopefully, less likely to draw Askala’s attention. All the same, we still had to get in and get out soon.

My thoughts wandered to Ashton. It had been a day since his death, and we had done all the grieving we had been allowed – which was very little. I felt he would have known what to do about these meteorites, and probably would have had some theories about what they were.

“Alright,” Makara said, lowering her binoculars. “We’ve been looking down there for two minutes now, and nothing’s moving.” She paused a moment before giving a nod. “If anything jumps out at us...shoot first.”

Then, Makara walked downhill at a crouch, the rest of us following suit.

The glow of the fallen rock brightened as we advanced. It was about the size of a small house, and it was hard to imagine something this large falling from the sky without completely obliterating this valley. The boulder emanated a pink, molten glow that cast the valley in dancing light. I didn’t think any of us expected the meteorite to be so big. Perhaps the fungus had padded its fall somewhat, or maybe it had impacted at a low velocity.

As we advanced, I could see that downstream, the water radiated a pinkish light that seemed to come from the meteor. The pink riddled the stream, contaminating the water.

Slowly, cautiously, Makara stepped onto the stream’s bank. Water wrapped around the glowing rock, rushing past.

Grudge joined her, holding out a hand to touch the rock.

“I wasn’t going to,” Grudge said, defensively. He paused, feeling the surrounding air. “It’s warm. Hotter than a stovetop.”

“Doesn’t surprise me,” Makara said, frowning. “I don’t get it. What’s Askala trying to accomplish with these things?”

The Angels around her were quiet. She looked directly at me, so I racked my brain for a theory.

I pointed to the river. “Well, there’s obviously something in this rock. Whatever it is, it’s getting into the water. Maybe it has something to do with that?”

Makara watched the glowing water downstream. She lifted her radio.

“And nothing. It’s still glowing from its re-entry, but there’s nothing around here.” He paused. “Crazy how such a small thing could do so much damage.”

“Yeah,” Samuel said. “Probably the size of a watermelon or something. Crater’s as big as a football field.”

Makara looked up at
our
rock, the size of a house, which had no discernable crater or sign of impact. She was silent for a moment.

“Are we in the right place?” she asked me.

“Should be,” I said, pointing to the giant rock. “You can see it glowing. It definitely fell, maybe at a low velocity. Still, you’d think there’d be more of an impact than just splashing into a stream.”

“Maybe it was here all along,” Grudge said.

We both looked at him. He gave a shrug, pointing to the center of the rock.

“Only that one part of it is actually glowing. Maybe this giant rock was here before, and
it
was hit by a smaller meteorite.”

Makara and I inspected the boulder more closely. It was cracked, right down the middle, which I assumed had happened from its initial impact. But Grudge was right; if this entire thing
had
come from space, it would have laid waste to this area for miles around.

“Grudge is right,” Makara said. “Most of this thing was here before. It was hit by a smaller meteorite, which caused it to crack. I guess the contagion spread to the rest of the rock, along with the stream.”

“Ruth’s on the line with Julian right now. They’ve found something.”

The radio sizzled to silence, until Julian’s voice came out.

“We’re by the lake now, Point Charlie. The meteorite must have fallen into it, because the whole thing’s changing color. It’s not water, either. It’s that icky crap.”

“What do you want to do?” Grudge asked Makara.

Makara held up a hand, quieting him. “We’ll meet you over there, Julian. I’m converging all teams at your location. Point Charlie, you said?”

“If anything happens,” Makara said. “Call Anna and alert us all. We’ll meet at extraction.”

“Copy that. Try to hurry. It’s spreading fast. Twenty feet or so a minute, if I had to guess.”

“Copy that. We’ll be there soon. Over and out.”

At last, Makara switched over to Anna’s line.

“Perseus,
stand by for further orders. All teams are converging on Point Charlie, so let’s use the Charlie extraction point we picked out earlier.”

“Copy that,” Anna said. “Things are quiet up here. Haven’t seen any more of those things falling, and the infrared shows nothing outside the natural heat of the fungus. You should still be good to go.”

“All the same, stay alert,” Makara said. “It’s been quiet down here, too.”

Too quiet,
I wanted to add, but I kept my silence.

“Advise me of any changes,” Makara said. “Over and out.”

She attached the radio to her belt, then withdrew her handgun. She gave one last glance at the split boulder before turning back to the rest of us.

She headed back to the western hill, and we followed.

W
e left the valley, crossed the hill, and entered a thick stand of xenotrees. Point Charlie was through these trees and beyond another ridge. Samuel and Ruth would make it there before us, so Makara set a quick pace. The trees and the night were silent, yet all the same, it continued to feel like we were being watched.

When we passed the last line of trees, we took to the ridge. When we crested the rise, I looked down to see the bottom of the slope meeting with the shore of a massive lake, filling an entire valley with pink, translucent ichor. About one-third of the way into the lake, the liquid glowed
especially
bright, a neon pink with a silvery, metallic hue. Tendrils of the brightness expanded outward, claiming more of the lake’s surface.

At the bottom of the incline, twelve or so people stood, masked by darkness. We descended the slope, heading for the shore. Once we were close, I recognized Ruth, Michael, Samuel, and Julian. All of them were staring at the lake. Together, we watched the lake in silence. No matter how far the bright glow spread from the original point of contact, it kept its original luster.

“Theories on what this is?” Makara asked.

“The meteorite landed right in the center of that glowing section,” Julian said. “We got here soon after that.”

“Maybe one of us should go for a swim,” Ruth said.

Julian guffawed. “After you.”

One of the Angels picked up a nearby rock. Michael swatted it from his hand.

“Is it even safe to be standing out here, in the open?” Ruth asked.

“Yeah, we should get going,” one of the Angels said.

“We
need
to find out what this is,” Makara said. “Otherwise, this was a waste of time.”

“I’d rather waste my time than die,” Ruth said.

Ruth shrugged. “There’s nothing around for now, but...”

Grudge pointed across the lake. “Don’t speak so soon.”

Everyone dropped to the ground. Makara raised her binoculars to her eyes. Samuel and Michael followed suit with their own pairs.

“It’s going in the lake,” Julian said, staying focused on the crawler.