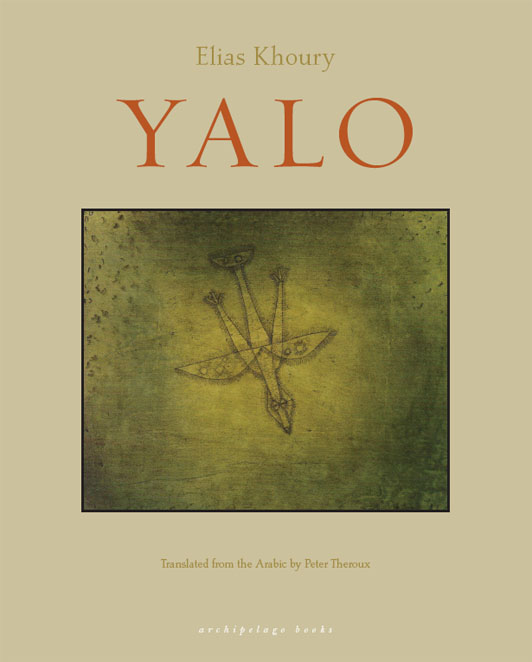 R
AINMAKER
T
RANSLATIONS
supports a series of books meant to encourage a lively reading experience of contemporary world literature drawn form diverse languages and cultures. Publication is assisted by grants from the Black Mountain Institute (
blackmountaininstitute.org
) at the University of Nevada, Las Vegas, an organization dedicated to promoting literary and cross-cultural dialogue around the world
.

Translated from the Arabic by Peter Theroux

All rights reserved. No part of this book may be reproduced or transmitted in any form without the prior written permission of the publisher.

Yalo / by Elias Khoury; translated from the Arabic by Peter Theroux.

This publication was made possible with the support of the Black Mountain Institute of UNLV, Lannan Foundation, the National Endowment for the Arts, and the New York State Council on the Arts, a state agency.

As Christ walked upon the sea

I walked in my visions

But I came down from the cross

Because I am not afraid of heights

And I do not preach of Resurrection

Y
alo did not understand what was happening.

The young man stood before the interrogator and closed his eyes. He always closed his eyes when he faced danger, when he was alone, and when his mother . . . On that day too, the morning of Thursday, December 22, 1993, he closed his eyes involuntarily.

Yalo did not understand why everything was white.

He saw the white interrogator, sitting behind a white table, the sun refracting on the glass window behind him, and his face bathed in reflected light. All Yalo saw were halos of light and a woman walking through the city streets, tripping on her shadow.

The young man stood before the interrogator at ten o'clock that cold morning and saw the sun refracted on the window, shining on the white head of the man whose mouth opened with questions. Yalo closed his eyes.

Yalo did not understand what the interrogator was shouting about.

He heard a voice shouting at him, “Open your eyes, man!” He opened them and light entered, into their depths like flaming skewers. He discovered that he had had his eyes closed for a long time, that he had spent half his life in the dark, and he saw himself as a blind man sees the night.

Yalo did not understand why she had come, but when he saw her he dropped onto the chair.

When he entered the room, the nameless girl was not there. He entered stumbling because he was blinded by the sun refracted on the glass. He stood in the whiteness, his hands cuffed and his body shivering with sweat. He was not afraid, even though the interrogator would write in his report that the suspect was trembling with fear. But Yalo was not; he was shivering with sweat. Sweat dripped from every part of him, and his clothes were spotted with the odd-smelling moisture emerging from his pores. Yalo felt naked under his long black coat, and smelled the odor of another person. He discovered that he did not know this man called Daniel, also known as Yalo.

The girl with no name arrived. Perhaps she had already been in the interrogation room, but he had not seen her when he came in. He saw her and dropped onto the chair, feeling that his legs had betrayed him. A slight dizziness came over him, and since he was unable to open his eyes, he closed them.

“Open your eyes, buddy!” shouted the interrogator. So he opened them, and saw an apparition that resembled the girl with no name. She said that she had no name. But Yalo knew everything. While she was dozing, her body delicate and naked, he opened her black leather bag and wrote down her name, address, telephone number, and everything else.

Yalo did not understand why she said she had no name.

Her breathing was uneven and the breeze around her face seemed to
suffocate her. She was unable to speak, but she was able to say this: “I don't have a name.” Yalo bowed his head and took her.

There in the cottage, below the Villa Gardenia owned by Monsieur Michel Salloum, there, when he asked for her name, she said in a voice filled with gaps, lacking the air that was closing her lungs, “I don't have a name. Please, no names.” “Fine,” he said. “My name is Yalo. Don't forget my name.”

Yet she stood here, her name beside her. When the interrogator asked for her name, she didn't hesitate before answering, “Shirin Raad.” She did not tell the interrogator, “Please, no names.” She did not stretch out her hand as she had done there in the cottage where Yalo had slept with her after she had stretched out her incense-scented arms. He had taken her palms and put them over his eyes, then started to kiss her white forearms, inhaling the fragrance of incense and musk. He inhaled the fragrance of her black hair and buried his face in it, intoxicated. He told her that he was drunk on incense, and she smiled as if a mask had vanished from her face. Yalo saw her smile through the shadows the candlelight threw against the wall. It was her first smile on that night of fear.

What was Shirin doing here?

When he opened his eyes after the interrogator's shouts, he saw himself in Ballouna. He told her, “Come,” and she walked behind him. They walked from the pine forest below the Church of St. Nicholas and climbed the hill to the villa. The girl fell to the ground, or so it seemed to Yalo, so he turned to raise her, grasped her hand, and they walked on. When she fell a second time, he bent over her again, to carry her, but she shrank from him and stood up. She grasped the trunk of a pine tree and froze where she stood, panting heavily. He offered her his hand. She took it and walked beside him. He listened to the sound of her breathing and her panting fear.

When they reached the cottage, he left her at the door, entered and lit
a candle, tried to arrange his rumpled clothing and accessories, yet abandoned this quickly, realizing it would take too much time. When he went back to her, he found her resting her head on the leaf of the open door, making crying sounds.

She went in hesitantly and stood in the middle of the room, as if looking for a chair to sit on. Yalo jumped up and removed his pants from the chair and threw them on the bed, but instead of sitting down she remained standing and confused.

Instead of answering, she reached out pleadingly. Yalo took her outstretched hands, but when he saw the fear forming concentric circles in the depths of her little eyes, he drew back. He said he was afraid, he would say that he felt fear, but at that moment he did not know, he did not feel afraid before writing the word. He said it and felt it, then wrote it. Today, when he remembered her little eyes in the trembling candlelight, when he saw how the pupils of her eyes shrank into concentric circles, he felt fear, and said that he was afraid of her eyes.

When he drew back, he saw her coming toward him. Her hands were suspended in the air as if she were appealing to him for help. He came close to her and took her palms and placed them over his eyes, and she became quiet. He held her hands and felt their trembling, as if the lines of fear that throbbed within each of them had become like the arteries that circulate tension throughout the body. He placed her palms over his eyes, and saw the darkness, and felt how her body calmed down and quieted, and gave off the scent of incense.

“What's that sweet smell?” asked Yalo, drawing back. He sat on the chair and covered his face with his hands as though exhausted, and remained
there unmoving. The candlelight flickered in the piney breeze rising from the forest. The girl with no name stood beside him to regain the breeze fear had stolen from her when she saw the black phantom approaching, from the car stopped at the corner of the dense pine forest, below the Orthodox Church.

Burned by Nikki Duncan
A Foreign Affair by Evelyn Richardson
A Bookmarked Death by Judi Culbertson
In Petrakis's Power by Maggie Cox
Brother Tariq: The Doublespeak of Tariq Ramadan by Caroline Fourest
Bound To Love by Sally Clements
Orlando (Blackmail #1) by Crystal Spears
The Girls Club by Jackie Coupe
Blood Harvest by James Axler
A Family's Duty by Maggie Bennett
Our partner