Year of the Golden Dragon 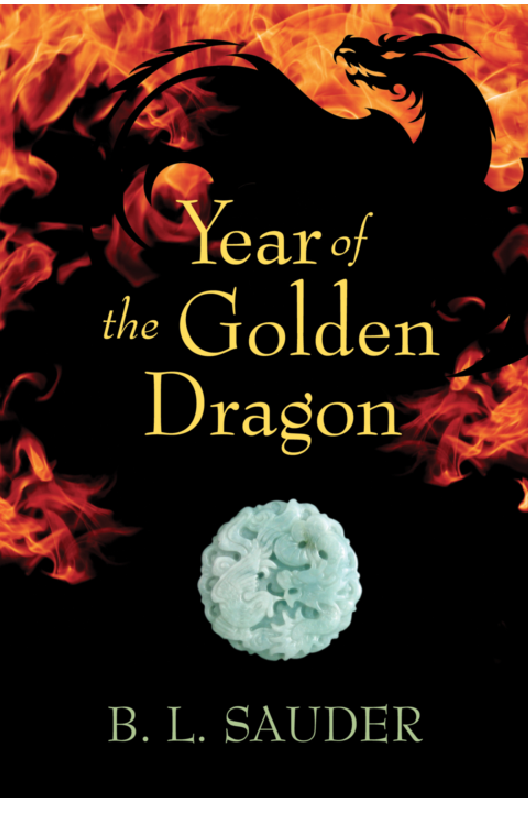 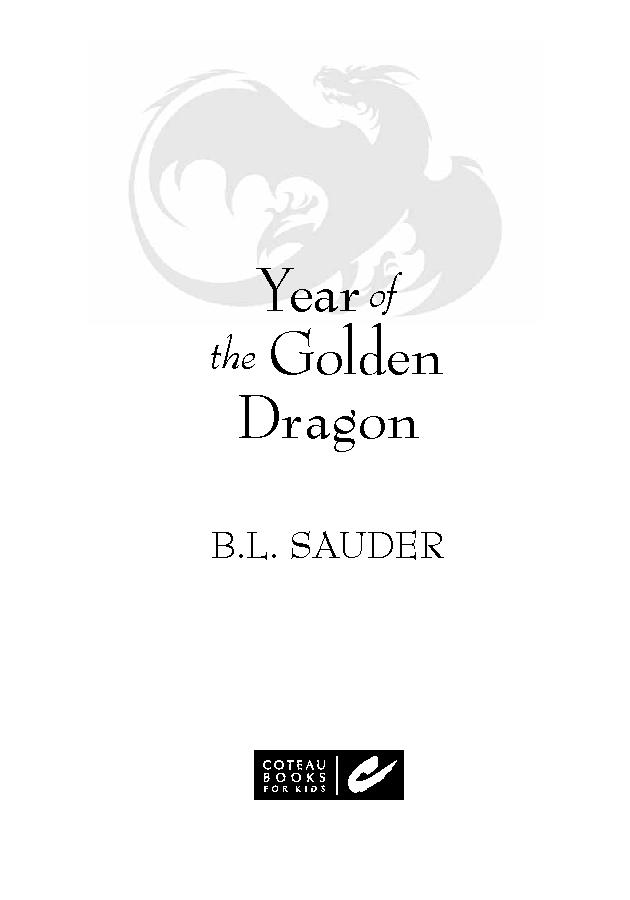 All rights re
served. No part of this publication may be reproduced, stored in a retrieval system, or transmitted, in any form or by any means, without the prior written consent of the publisher or a licence from The Canadian Copyright Licensing Agency (Access Copyright). For an Access Copyright licence, visit www.accesscopyright.ca or call toll-free to 1-800-893-5777.

This novel is a work of fiction. Names, characters, places, and incidents either are the product of the author’s imagination or are used fictitiously. Any resemblance to actual persons, living or dead, is coincidental.

Coteau Books gratefully acknowledges the financial support of its publishing program by: the Saskatchewan Arts Board, the Canada Council for the Arts, the Government of Canada through the Canada Book Fund, the Government of Saskatchewan through the Creative Economy Entrepreneurial Fund, the Association for the Export of Canadian Books and the City of Regina Arts Commission.

For my family, both East and West.

Where dreams may go,

May thrive and grow

Where doubt and fear are not.

For little dreams to go!

Master Chen was teaching a lesson
when he stopped in mid-sentence. His sleeping dog leapt up from its place at the hearth. It stood snarling at the door, ears erect, fur bristling along its spine. The dog slunk down and crept toward the thick, wooden door. Old Chen raised his hand and the animal halted, eyes fixed on the entrance.

Outside, the sound of distant drums rumbled. Chen and his two young apprentices froze as they listened to the low, echoing booms. The boys looked up at their teacher with eyes wide, waiting for him to speak.

Chen’s lined forehead furrowed, and his jaw clenched. He narrowed his eyes but avoided looking at Xiao Long and Huang Li’s faces as he pushed the children closer together. The teacher commanded the dog to stand in front of the two students.

Taking three long steps across the dirt floor, Chen grabbed his staff that was leaning against the clay wall. He gripped the pole with one hand and used the other to turn a black metal ring on the door, heaving it inward. The old man’s eyes darted from side-to-side as he peered into the fog, which hovered close to the ground, covering everything with a veil of moisture. The damp earth and moss smelled rich – a perfect day to gather worms and centipedes for medicines. But there would be none of that now.

Chen stared in the direction of the Imperial Palace and sniffed. He turned to the dog. Its snout was raised into the air, acknowledging the smoke.

The drums had stopped.

Master Chen spun around, making his robe and its long, wide sleeves flutter. He snapped his fingers and pointed toward the door. The dog leapt to the entry and stood with its shoulders hunched forward, tail straight out.

Chen kneeled before the two boys, grabbing each one by an arm. He looked from one pale face to the other and said, “The drums in the capital city have been silenced. I fear the worst for your family.”

The smallest child began to sob, but Chen did nothing to comfort him. He simply said, “We do not have much time.”

Releasing the boys’ arms, Chen reached for a small, square wooden box. The teacher said a few words and the lid sprung open. He took out a circular piece of jade hanging from a thin black cord. The flat jade disc was the color of a warm, green sea. Untying the cord, Chen removed the translucent stone and cupped it gently in his gnarled hands. The jade glowed, as if dozens of fireflies were captured inside.

The children stared at the magnificent round pendant pulsating in their teacher’s hands. A dragon and a phoenix, symbols of the emperor and empress, were engraved onto the pale green stone. The animals stared into one another’s eyes, bodies curving downward, tails touching. Several tiny sections had been carved around the edges of the jade, like a delicate paper cutout.

Chen spoke in a deep voice. “Observe this royal emblem. It is beautiful, yes?”

“The Emperor commissioned the best artist in the kingdom to create this pendant for your mother,” Master Chen said, nodding toward the older boy. “The pendant was presented to her when you were one month old. It was created from a ball of jade that Black Dragon had given to the Emperor – a perfect sphere that the Emperor had promised never to carve.”

The boys darted a look at one another.

“Please, Master. May I ask a question?” whispered Xiao Long.

“Yes,” the old man said, glancing at the doorway.

“Mother was not the empress. Why did my father give her a pendant with a dragon and phoenix?”

“Your mother was the first wife to give the Emperor an heir,” said Master Chen. “Not only did this gift enrage Black Dragon,” Master Chen looked pointedly at Huang Li, “but also your mother, the Empress Ching.”

Huang Li’s eyes met Chen’s for a moment before looking away.

“For many years now, the Empress has become obsessed with the idea that jade is known as dragon’s stone because it enables dragons to live for hundreds, even thousands of years. Knowing that your father longs to be immortal, she believes that if she finds the correct jade, she will be able to offer him life everlasting. And in so doing, he will forget his other wives and love her best.”

“Is that why the Empress broke the jade ball in the first place? She believed it had power inside of it?” asked Xiao Long.

“Yes,” Master Chen said. “She thought the Emperor loved everything – you, your mother, even the jade from Black Dragon – more than her. So, during the days that the Emperor waited for his fourth wife to give birth to you, Xiao Long, the Empress grew more and more jealous and angry that the Emperor was spending so much time away from her. Infuriated, she took her ire out on the jade, cracking it open to see if it indeed held something inside. But there was nothing there.

“Your father was furious when he discovered what the Empress had done, and to pay her back for taking away the joy of your birth, he took the broken jade and had it made into a pendant so as not to waste its beauty.”

Master Chen pursed his lips and looked into Xiao Long’s face. “When your mother, Fourth Wife, died, the Emperor blamed it on the jade pendant. He brought it to me to lock away. Although the jade has been kept in a special box, it still has power to wreak havoc over your family. The time has come to try and suppress Black Dragon’s anger which seeps from this jade.”

Master Chen raised the pendant up in both hands, high above their heads. “Bow down and close your eyes,” he commanded.

The children dropped to their knees and touched their foreheads to the ground. Their black braids trailed down their small backs as they huddled together, eyes squeezed tight. Master Chen’s voice thundered above them:

In the darkness of this night.

Once again it gives us light

On this black and fateful night.

Kings will never use its light

Sear this image in their sight

Royal sons must reach the height

There was a tremendous crack! The boys grabbed for one another.

“Stand up and open your eyes,” Chen said to his pupils.

The half-brothers shook and gasped as Master Chen opened his hands. In his palms lay the pendant, no longer glowing, and broken into three pieces.

With trembling fingers, Xiao Long automatically picked the section with the dragon. Huang Li took the piece showing the head of the phoenix. Master Chen put the last one into his pocket.

Chen bit the thin cord of leather that had been attached to the jade in half and hastily threaded a piece through pinprick holes in each piece of jade. He tied the pendants around each of the children’s necks and tucked them under their heavy tunics.

“Let us go,” he shouted, pointing towards the door, “Now!”

The boys ran out, the dog in the lead.

Master Chen reached into the fire and grabbed a burning log. He touched the fiery wood to his straw bed, low table and reed floor mats. They caught easily, smoking and curling as they burned.

Among Thieves by David Hosp
Losing Julia by Hull, Jonathan
Girl Runner by Carrie Snyder
Adam, Devils on Horseback: Generations, Book 1 by Beth Williamson
Vienna, 1814: How the Conquerors of Napoleon Made Love, War, and Peace at the Congress of Vienna by David King
They Don't Play Stickball in Milwaukee by Reed Farrel Coleman
The Celestial Kiss by Celine, Belle
Apophis by Eliza Lentzski
Empire of the Moghul: Ruler of the World by Alex Rutherford
3 Seconds (Time for Love Book 6) by Bethany Lopez
Our partner