Read You Disappear: A Novel Online

You Disappear: A Novel 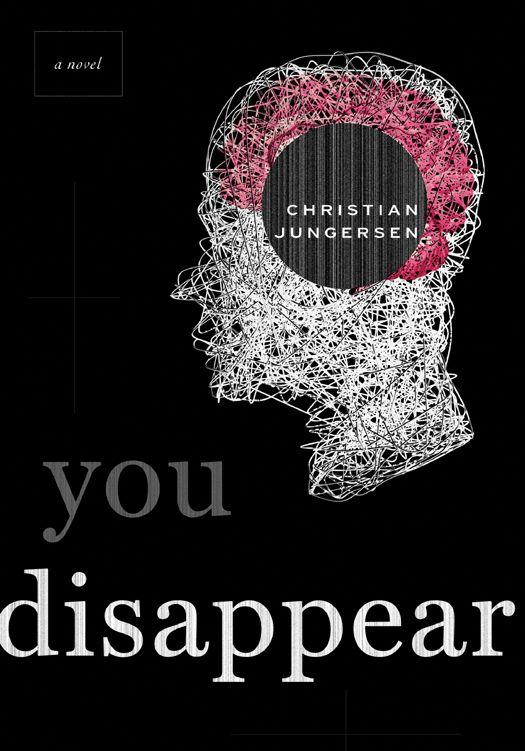 All rights reserved. Published in the United States by Nan A. Talese/Doubleday, a division of Random House LLC, New York, and in Canada by Random House of Canada Limited, Toronto, Penguin Random House Companies.

Originally published in Denmark as
Du forsvinder
by Gyldendal A/S,
Copenhagen, in 2012. Copyright © 2012 by Christian Jungersen and Gyldendal A/S.

All texts in between chapters were written for this novel by Christian Jungersen with the following exception: the articles on
this page
and
this page
, which were translated from the Danish newspaper
Politiken
.

Copyrighted material used by permission:
this page
and
this page
, articles copyright ©
Politiken
, Denmark;
this page
, lyrics from “Hot!” by Nik & Jay, copyright © 2002 by Nexus Music.

We whoosh down between dark rock-faces, through hairpin turns, down and around past dry scrub, silver-pale trees and back up, then over a ridge where the car nearly leaves ground and Niklas and I whoop as our entrails become weightless.

The hot Mediterranean air buffets our faces, for all four windows are open. Frederik takes a curve so fast that I grab my headrest. The sea beneath us keeps switching left and right.

Normally Frederik’s never brave behind the wheel, so I try not to be afraid. And the heat makes the rocks steeper, darker, the lemon groves prickling even more tartly in my nose, the sea shining blue like I’ve never seen it before.

Around yet another rock outcrop and suddenly we’re engulfed by cyclists. I scream. A swamp of neon-pink cycling jerseys. I look out the back window: no one’s fallen, but they’ve dismounted from their bikes; clenched fists, open mouths. We round the next curve.

He lets out a small sigh and maintains his speed.

And is it the speed that makes his eyes look deeper? Black-violet massifs. He seems strange, though I can’t say where the difference lies.

Another hard bump and again all three of us rise into the air.

Niklas has had his head out the window. Now he pulls it back in. “Mom, just leave off.”

It’s the speed, the colors, the heat, and all the outrageous Majorcan beauty. Niklas sighs with precisely the same sibilance as his father and again leans his head out the window.

He acts as if he doesn’t hear me.

Still he doesn’t. I don’t care if he’s sixteen now; I turn around and pull him in myself, I use some force, and then he stays in his seat.

The Mediterranean shines so brightly it’s impossible to look at it straight on. It floats up through the terrain and calls us. Like the tunnel of light the dying see:
Come, become one with my beauty and eternity
. A nudge to Frederik’s hand and we’d swerve over the berm and all become weightless again, and then we’d be lifted out of the landscape too.

I want to say
Stop, stop
again. Instead I look at our son;
he’s
having fun. Am I just a killjoy?

An oncoming driver lays on his horn. Frederik keeps his eyes fixed on the road before us.

“They drive like total madmen down here,” he says.

“Will you please drive more slowly?” I ask again.

The road twists. And then we’re back in shadow and close to the rock wall. An oncoming truck suddenly fills the space in front of us. Frederik swings our car up against the rock-face. Granite grates against the panels with a sound like we’ve been tossed in a metal grinder. And then we are past.

Frederik says, “We took out full coverage. The rental agency’ll cover it all.” He doesn’t slow down.

Now Niklas pulls on the back of Frederik’s seat. “Dad, stop! Stop!”

But he doesn’t lift his gaze from the road. He sighs like before. I pull back on the hand brake as we drive. He laughs and releases it again.

“Frederik, look at me. Won’t you at least do that?”

He keeps looking straight ahead as he speaks, and as always, his voice projects reason and calm. “I need to keep my eyes on the road.”

Five days ago, on the day we were to fly to Majorca, I stopped on my run along the wooded path beside Lake Farum, and I gave myself some time to think about how good my life really is. I walked out on one of the short piers, and the breeze chilled the sweat beneath my top. I thought about what has made these years so different from my life a few years ago.

Out on the lake the water rose in small swells that weren’t actual waves, and the woods on the opposite bank looked like they’d gone deeper into autumn than the trees above and behind me. I have a lovely son and good friends, meaningful work, a house we are fond of. But I had all of that three years ago too. The difference—the major, critical difference—is that now I feel loved.

How many people can say that, that they really feel loved? It’s something I should relish. Finally, I thought, everything’s fallen into place. And then I continued my run, down the path through the woods.

Farum is a peaceful place, a suburb you move to only when you have two kids, or in any case have plans for number two. Between the charming medieval village and the lake lies an older neighborhood with large houses, the neighborhood where we are so lucky as to live. From this original core, Farum grew more than fourfold in the ’60s and ’70s. In the fields east of the village, miles of new streets were laid out with yellow-brick single-family homes, schools, kindergartens, and then more single-family homes, another school, a few more kindergartens. All connected by a vast network of car-free bike paths surrounded by grass, so that kids can bike from school to the rec center and from soccer to a friend’s house without crossing a single street, while their parents take the train or the freeway home from work in Copenhagen.

We were trying to have a second child when we moved here, not yet
knowing that it would never happen. And not yet knowing how Frederik would succeed so unbelievably well in his career, for we were mistaken in that too—we thought there’d only be a couple of years when he’d have to spend all his evenings and weekends at work as he glided from one success to the next.

In one of his many speeches to the children, parents, and staff at his school, Frederik said that he became a teacher and later a headmaster “because helping a child through difficulty is the most meaningful thing you can do with your life.”

Big words, and sometimes I’ve wondered if they weren’t too big. Yet no one can doubt that Frederik could have earned a lot more money if he’d been the leader of almost anything but a school. As for me, I studied to be an architect for a year before I transferred to a teachers’ college. While I was in architecture school, I made a bit of money as a tennis instructor, and the difference I made in the lives of my young tennis students—especially when we talked about something besides tennis—soon came to mean more to me than my studies. Changing schools was an unavoidable outcome of thinking about what mattered in life.

From the lake, I ran a few hundred yards on the path along the railway and soon reached home. On my way up to shower, I knocked on Niklas’s door. He was sitting in front of his computer.

“Have you started to pack?” I asked.

“Have you started to pack?”

His best friend in gymnasium, Mathias, was going to have his house to himself for the fall vacation, and we’d had a hard time getting Niklas to join us, away from the week’s approaching party madness. Mathias composes electronic music, and Niklas spends a lot of energy making music videos for him. They’d planned to stay together at Mathias’s the whole week.

“You’ll be really happy you came, as soon as we get down there,” I said.

My cell phone rang in our bedroom, and I ran in to answer it.

It was Frederik, saying that he would be home later than planned. He apologized profusely, but he had to take care of something with the school’s bank.

The Owner of His Heart by Taylor, Theodora
The One That Got Away by Megan Hussey
Three Faces of West (2013) by Christian Shakespeare
The MacKinnon's Bride by Tanya Anne Crosby
The Hidden Staircase by Carolyn Keene
Vulgar Boatman by William G. Tapply
Remembering the Titanic by Diane Hoh
City of Gold by Daniel Blackaby
Christmas Break by Boroughs Publishing Group
Ready Player One by Cline, Ernest
Our partner