Read Your Mother Was a Neanderthal Online

Your Mother Was a Neanderthal 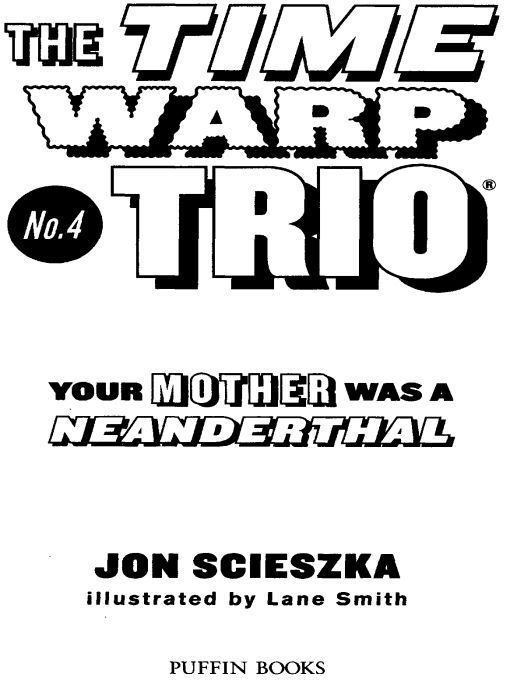 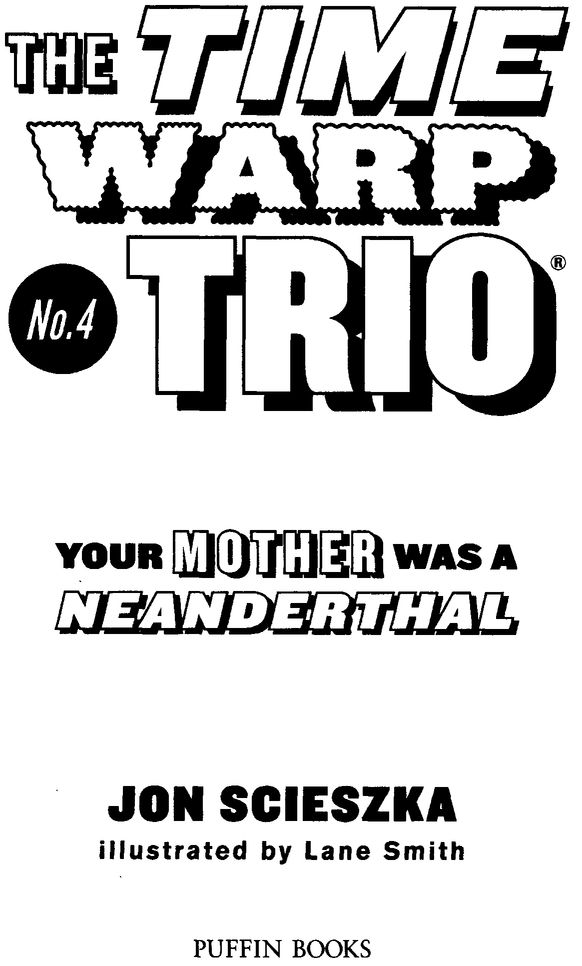 ONE
I
t was like nothing on earth we had ever seen before. Fred, Sam, and I stood in front of a forest of strange trees and giant ferns. A rocky cliff rose behind us. A volcano smoked ahead of us.
But we didn’t really notice any of that at first. The first thing we noticed was that the three of us were standing around completely, unbelievably, and absolutely naked.
“We lost everything,” yelled Fred. He dove behind the nearest giant fern.
“I don’t understand it,” said Sam. “This never happens in those other time travel books.”
“So why does it have to happen to us?” asked Fred. “This is totally embarrassing.”
“We didn’t lose everything,” I said. “Sam still has his glasses. You’ve got your hat. And I’ve got my straw.”
“That’s all you have? A straw?” asked Fred. “Don’t tell me you lost
The Book.”
“Okay, I won’t tell you,” I said.
“You don’t have
The Book,?
Oh, man,” said Fred. “This time we are
really
cooked. I knew it wouldn’t work. There is no way we are going to find
The Book
here in the Stone Age. We’ll be lucky if we find anybody who can even talk.”
Sam looked around. “So, okay. Things don’t look so good.”
“Don’t look so good?” said Fred. “We have to wait a million years for people to invent talking, writing, and then bookmaking. And all you can say is things don’t look so good?”
“According to my calculations,” said Sam, “we’ve probably landed in the year 40,000 B.C. We are completely naked. We have no tools,’ weapons, or supplies. But we still have one thing.”
“Goosebumps?” said Fred.
“No, you jerk. Knowledge. Brainpower. All the learning of modern man,” said Sam. He pointed dramatically toward the smoking volcano. “Out there in the prehistoric world, we can still be kings, or at least very popular guys.”
Fred and I looked out over the grassy plain.
“Right now I’d settle for some underwear and a slice of pizza,” said Fred.
Sam pretended he didn’t hear that last crack. “With our superior brainpower, we can recreate modern civilization. Observe.” He pulled a giant leaf from a bush. “Pants.” He held up a piece of vine. “Belt.” He tied the leaf on. “Clothes.” 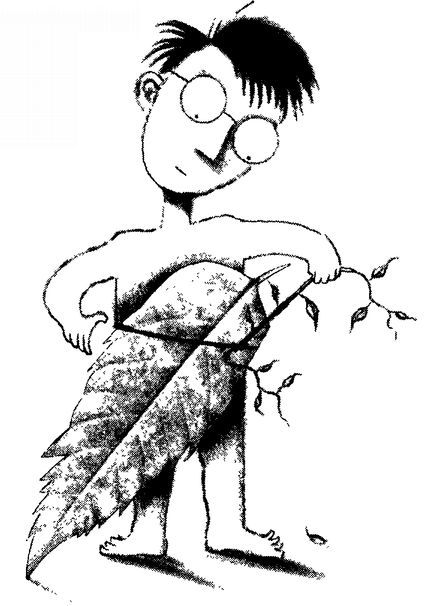 Fred and I did the same. We looked pretty ridiculous. But it was a start on civilization.
Fred hopped around in his new leaf shorts.
“Ug, ug.
Now we learn Reading and Writing. Skip Arithmetic.”
A strangled screech echoed in the forest.
I checked the landscape nervously.
“What about Running and Hiding? It sure would spoil my day to get eaten by a dinosaur.”
“No, no, no,” said Sam. “Brainpower. Dinosaurs and cavemen never lived at the same time.” Sam adjusted his leaf. “If this is 40,000 B.C., dinosaurs have been extinct for 65 million years. Cro-Magnon man, our direct ancestor, should just be replacing Neanderthal man.”
Sam paused. And at that very second we heard a terrified human scream.
“Aha!
Man,” said Sam.
But then we heard another sound. It was a roar. A very large roar. The kind that comes from a very large, angry, and hungry animal.
“I think it’s time for a disappearing act,” I said.
“You can do that without
The Book?”
asked Sam.
“Sure,” I said, diving behind the nearest fern.
Fred and Sam followed just as a bunch of wild-looking men crashed out of the bushes. They wore raggy skins, had long scraggly hair and beards, and were running as fast as they could.
“Cavemen,” whispered Fred.
The tops of the bushes shook, and the animal that was chasing them stuck out its head. “Dinosaur,” whispered Fred. 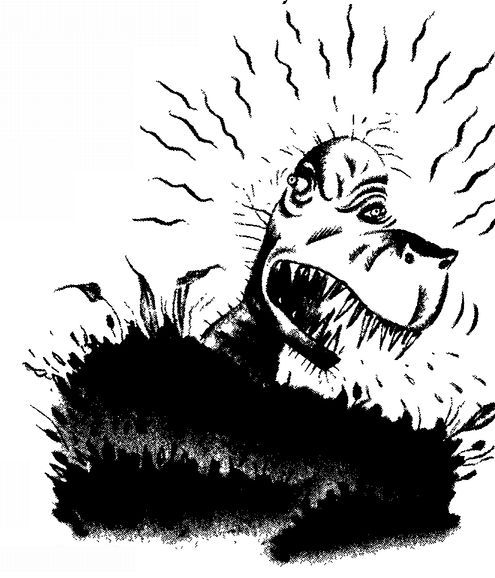 “Impossible,” said Sam. “Dinosaurs are extinct.”
The big scaly head turned its beady eyes toward us and roared.
We backed against the rock wall.
“Why don’t you go explain that to him,” I said. “Then maybe he’ll go away.”
The dinosaur looked at us and roared again.
We went to the Stone Age to become kings, and were about to become lunch.
TWO
B
ut I’m getting way ahead of myself (or really about 42,000 years behind). Let me explain.
My best friends Sam and Fred were hanging around at my house after school as usual. We were trying to finish some annoying math homework—very unusual. If it hadn’t been pouring rain, we’d have been long gone.
“I’ve got a great idea,” said Sam.
“I don’t need any great ideas,” said Fred. “I need the answer to problem 14: ‘If Mr. Sleeby walks at an average speed of 2.5 miles per hour, how many miles does he walk in 4 hours?’ ”
“2.5 miles per hour times 4 hours equals 10 miles,” said Sam. “You see, our problem is we’ve been going about this time-travel business all wrong. We haven’t been using our brains.”
I
looked up. “What do you mean?”
“Well, I’ve been doing a little research, reading time-travel books—
Half
Magic, Narnia stuff, A
Wrinkle in Time
,
and
The Time Machine.”
“Hey, I saw that movie,” said Fred.
“And do you know what people in those books always forget?”
“Food,” said Fred. “They never eat in those books.”
“No, you Neanderthal,” said Sam. “They never pack anything useful to take with them. Like King Arthur would have been amazed by this calculator. The Cheyenne would have been wowed by a Walkman.”
“And Blackbeard would have loved an F-16,” said Fred.
Sam frowned. “I’m serious. If we just take the right ordinary stuff, people will be convinced we’re magic.”
I put down my pencil. “But I just learned this great trick,” I said. “Watch me roll this straw across my desk using only the invisible powers in one finger. I won’t touch it. Watch. Hocus, pocus, straw move-ocus.” The straw rolled across my desk with my finger just behind it. 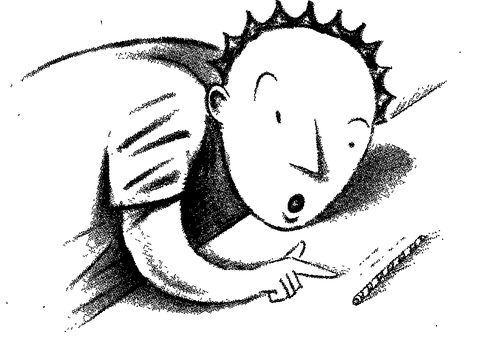 “That’s very magical,” said Fred. “Especially the way you blow the straw so it rolls.”

Thyme (Naughty or Nice) by K. R. Foster
Murder at the Holiday Flotilla by Hunter, Ellen Elizabeth
Cherry by Lindsey Rosin
Dragonsong by Anne McCaffrey
Voyage of the Dead - Book One Sovereign Spirit Saga by Forsyth, David
Man of Misconceptions : The Life of an Eccentric in an Age of Change (9781101597033) by Glassie, John
My Stroke of Insight: A Brain Scientist's Personal Journey by Jill Bolte Taylor
Starflight by Melissa Landers
The Monstrumologist by Rick Yancey
Home by Nightfall by Alexis Harrington
Our partner