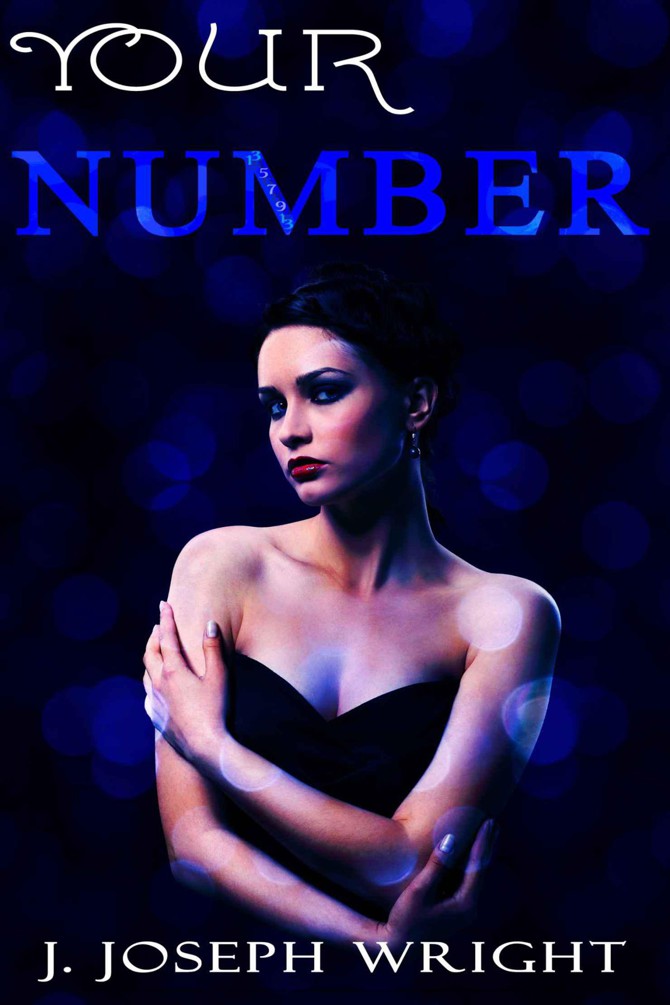 This is a work of fiction. Names, characters, places and incidents are the products of the author’s imagination or are used fictitiously. Any resemblance to actual persons, living or dead, events, or locales is entirely coincidental (and would be quite frightening, to say the least).

I want the world to read YOUR NUMBER. If you’d like to share it with your friends, feel free. Just don’t make a material gain off of it, because that would constitute copyright infringement. Thank you, J.

Glass. Glass everywhere. The balcony floor, glass. The safety rail, glass. She thought quite possibly the night sky was made of glass. And, littering the place like sparkling gems, was A-list celebrity after A-list celebrity. Jennifer Lopez, giggling with Steven Tyler. Tom Cruise, chatting Steven Spielberg’s ear off. Kim Kardashian, with her sister Kourtney, feasting on caviar and sea bass while swaying seductively to a dance remix of
Lights
. Sunset Tower Hotel had been invaded by Hollywood’s crème de la crème. Despite her recent successes, Kate still felt a little out of place.

“Don’t do it!” a voice rose over the pounding bass. “Don’t jump, Kate! I can’t lose my twin sister!”

Kate felt her face go red. She gave Eva a stiff lip, trying to say, ‘shut the hell up,’ without actually saying it. People were watching. Eva just smiled and shook her head. She had a full glass of champagne in each hand.

“Here,” she gave one to Kate. “I was gonna drink both, but it looks like you need this more than me,” she took a particularly undignified guzzle, then burped. What a lady. “What’re you doing way up here?” she squinted. “Hey, you’re not upset, are you?”

Kate glanced at the celebrity fete below her feet. “About what?”

“You know,” Eva forced Kate to look at her. Except for the different length hair, they were a perfect match, a mirror reflection. “About not winning. Because you shouldn’t be upset or jealous or anything. Like they say, it’s an honor to be…”

“So you
are
pissed!”

“I
am
not,” Kate sighed. “I’m just…tired,” she looked past her sister at the small gatherings on the veranda. It was quieter up there, and darker. Several groups sat in cozy, private settings, created by a series of hanging tapestries. She saw shadows and heard voices, but didn’t see many faces. “Where’s Charlie? You seen him?”

“Charlie?” Eva downed the rest of her bubbly in one gulp. “He’s showing off his Oscar to anyone who wants to see it. I mean, tacky,” she rolled her eyes.

“Oh, bull,” Eva dug into her handbag and fished out her phone. “Hey, listen. I’m gonna get outta here…you gonna be okay with Charlie?”

“Yeah. He’ll probably crash at my place tonight,” Kate saw something in her sister’s eyes. “Don’t give me that look. We’re just friends.”

“Night, night!” Eva tiptoed downstairs. The second she glided out of sight, Kate lost her breath and jumped at the sudden and disorienting sensation of being twirled around.

“I thought she’d never leave,” Charlie had her by the hips. He kissed her quickly and raised his Oscar above his head. “Can you believe I won!”

“Of course you won,” she assured him. “Your performance was a classic. You deserve it.”

His expression straightened and he skewed his head. “Oh, Katie, you’ll win one,” he kissed her cheek. “You’ll win more than one,” he backed away, beckoning her to the labyrinth of silky canvases, candlelight casting him in silhouette. “Come on…some people want to meet you.”

He led her to the outermost corner of the patio, where the music became nothing more than thumping in her ears. Sitting at a large table, in the dimness, she recognized each and every person, all superstars. Angelle, the pop sensation, with her boyfriend, Bradley Davis, a Pro Bowl quarterback. Big-time actors Dean Bow, Elena Lake and Simone Bardot—it looked like the cover of US magazine.

“Everyone, this is Kate,” Charlie said. “Kate, everyone.”

“Welcome to our cloistered little Oscar party,” Dean gestured toward the transparent tabletop. “Have some. On me.”

Kate recoiled from the white powder, sifted and fashioned expertly into long lines.

“No, thanks,” she waved her hand, then observed at Charlie. He put his Best Supporting Actor Award down and picked up a straw.

“What the hell,” he vacuumed half a line up one nostril, then finished it up with the other. “It’s a celebration, am I right!”

“Right!” Dean stood and gave Charlie a high-five, which evolved into a hug. When they separated, Dean sat down, out of breath. “That’s great, Charlie. Just great. Winning an Oscar this early in your career is amazing. I’m happy for you,” he looked at Kate. “And you, Kate. It’s true about being nominated. People’re talking about you already. It’s nothing but good for your career, nothing but good. Except…”

“Except what?” Kate asked.

All of the sudden, Dean’s face got serious. It made Kate nervous. He didn’t seem inclined to answer, so Angelle did for him.

“You go by your real name, don’t you?” she asked Kate, then turned to Charlie. “And so do you. You guys both go by your birth names?”

“Me too,” Kate was confused. “So does my sister. What’s this have to do with anything?”

Dean and Angelle exchanged glances. The others shifted in their seats.

“Do you know your number?” Dean leaned over a candle, his features distorted by the conflicting shadow and light.

Everyone at the table cracked up at her, everyone except Charlie. Dean was especially gleeful, but that changed as he set down his champagne.

“I mean your death number.”

Kate squinted at him, then at Angelle. They both had poker faces. It was Kate’s turn to giggle. “You guys’re kidding, right?”

Angelle cleared her throat and seized Kate’s attention. “Everyone, when they’re born, is fated a number. It could be one, or it could be one hundred billion. Whatever the number, it signifies how many times your name can be said aloud. Once that number is up, once your name has been said that many times, you die.”

“Listen,” Angelle sounded urgent. “This is real,” she looked at Charlie. Suddenly quiet, he turned away. “This affects famous people the most. Since we’re in the spotlight, a lot of people out there say our names every day.”

“And the more famous you get, the more people say your name,” Elena lowered her dark glasses. “It adds up fast.”

Angelle added, “It’s a dangerous game to use your real name in this business.”

“That’s why so many of us use pseudonyms,” Dean nodded. “It’s not because the name sounds better…it’s because of the death number.”

Charlie shook his head, an earnest and vehement denial. “This is crazy,” his voice went up several decibels. “You guys’re trying to scare us.”

Angelle sighed. “I wish we were kidding, but we’re not. The death number has taken so many celebrities who made the mistake of using their real names. Too many recently.”

“What?” Kate wouldn’t believe it. “I thought she died of alcohol poisoning.”

“There’ve been so many of them,” Angelle said. “From James Dean to John Belushi to Chris Farley—”

“Michael Jackson,” Elena concealed her eyes with her glasses again.

“Michael Jackson?” Kate was even more skeptical. “No way!”

Angelle and Dean both turned to each other silently. Dean nodded. Angelle said, “There are…signs.”

“Before your number is up, you start to see things, strange things,” Dean lit a cigarette.

Charlie kept his mouth closed. With his eyes, he demanded more. Dean took a long drag from his Camel, leaned forward, and, using a credit card, began playing with the powdered cocaine. After a few swipes, he finished his design, two lines intersecting two other lines at oblique angles, a perfect:

Kate cocked her head. “That’s a Twitter hashtag, isn’t it?”

“It’s also the number symbol,” Dean said. “This symbol is found, in one way or another, at the scene whenever someone is killed by the death number.”

Kate stood and forced Charlie up with her. “I’ve had enough of this. Come on, Charlie. Take me home, okay?”

Angelle sprang to her feet. “We’re just trying to warn you. You and your sister are in danger,” she glanced at Charlie. “And so are you. You know it, don’t you?”

Charlie scratched his scalp, mussing his already purposefully unkempt hair. “I don’t know what you’re talking about, Angelle. But that isn’t your real name, is it?”

“No,” she said flatly. “Of course not. And you shouldn’t be using your real name, either.”

“It’s too late,” Charlie took Kate’s hand and led her to the stairs.

Now You See Her by Jacquelyn Mitchard
Dead Weight by Susan Rogers Cooper
Man Trip by Graham Salisbury
Two Dude Ranchers for Dawn [Cowboy City 1] (Siren Publishing Ménage and More) by Luxie Ryder
His Strict Requirement: Billionaire Secrets - Book Five by Sinclair, Drew
Who's the Boss by Vanessa Devereaux
Every Kind of Heaven by Jillian Hart
Boldt 03 - No Witnesses by Ridley Pearson
A Bit of Me by Bailey Bradford
The Devil Next Door by Curran, Tim
Our partner