Read You're Still the One Online

You're Still the One 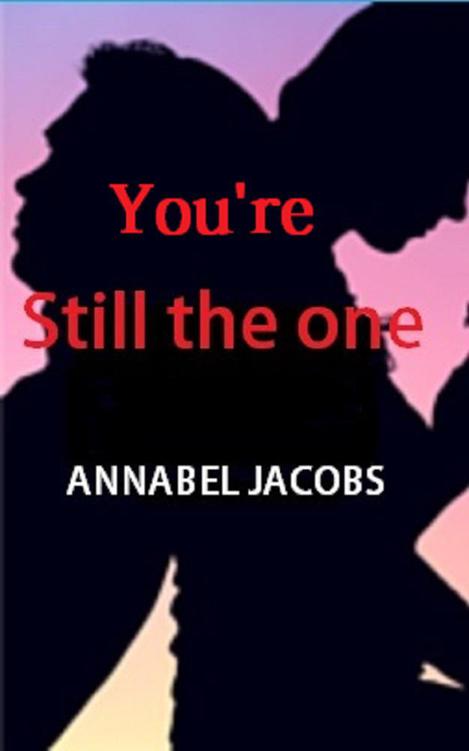 You’re Still the One

No part of this publication may be reproduced or transmitted in any form whatsoever, electronic, or mechanical, including photocopying, recording, or by any informational storage or retrieval system without express written, dated and signed permission from the author.

“Do you really believe we can put the past behind us and work together?”

“Do you really believe w can be friends again??

You’re Still the One

The slender woman turned.  Though her thick mink-dark hair was short now, her

wariness, and the same uncertainty as the time he’d seen her.  “The the flesh.”

“I’ll say.”  On this perfect June Sunday, he’d walked right in on his past, and his

His breath jammed somewhere under his ribs, but Rick walked in and shut

the Door as if he hadn’t just had the wind knocked out of him.  He was disoriented, his

head swam, and he had to remind himself where he was.  Oklahoma City , not Norman.

He didn’t know whether to shake her hand or hug her, so he simply stood there,

arms hanging limply at his sides, she gave him an uncertain smile.  “Hello.”

Katie Foley, who’d been his first love, who’d broken his heart and walked

away.  Katie, whom he’d thought he would never forget. She was here.  Ten years older,

Beautiful In the way a woman becomes when she grows into her skin, her identity.  It

hurt his Chest to look at her .

This case—her case—was the reason his office manager, Nita Howard, had page

Katie’s dark-rimmed eyes paused hungrily on his features.  Her voice went soft and Shy, the way it did when she was in an uncertain situation.  “It’s been a long time.”

No Kidding.  And Rick suddenly felt everyday of those long years in the wary full

of his muscles, the way her smoke and honey voice still stroked up his spine like warm

Katie.  He couldn’t stop his gaze from sliding down her body, the way his hands

Her coltish figure had rounded out, the angular edges of her hips now soft, her

waist nipped in tightly.  Her breasts were fuller, curving beneath the short sleeved, cotton

floral dress she wore.  The wavy dark brown hair that had once reached the middle of her

back was a shiny wedge that came just below her delicate ears.  The style sharpened her

She was stunning. Her wide, dark-lashed eyes were bright with unshed tears, he

realized, as her troubled gaze sought his.

“I need you.  His muscles clenched against those words.

In the end, she hadn’t wanted to need him, had wanted to stand on her own.  She’d

proven that by walking away.

him the day before his college graduation.  Thought he’d forgotten how pain had closed

responsibilities.  Couldn’t live with the way he took total control.  She wanted a partner,

not someone who made decisions without her.

from flying, Rick walked around her to his desk.  He felt a foolish urge to ask Nita to

come in, but his office manager had left as soon as he arrived.

She was certainly the last person he’d expected to see.

That old familiar awareness throbbed to stilted life.  “How did you find me?”

“Um, this,” She pulled a black  pocketbook from her purse and slid out a neatly

folded piece of newspaper.  She handed it to him.  “I saw this about three years ago.”

Rick skimmed it, his gaze going to hers as he realized it was the article the

Associated Press had picked up on him.  Two weeks after Rick had left the Air Force, a

Major’s estranged wife.  Rick had set out on a one man mission to find the child and

a story, which had been picked up by AP.

Katie had seen the article.  And kept it.  Not knowing what to think about that, not

wanting to think anything, Rick handed it back to her.

She smiled uncertainly, slid the clipping in her pocketbook. "I called Kevin to see where you were and he told me. I found your phone number in the book."

He'd spoken to Eric Jones just yesterday, and his college roommate hadn't mentioned a thing about Katie. Rick made a mental note to tell his friend not to be so free with information.

Still not believing she was here, he cleared his throat. "How are are?"

"Fine." She shoved a thick lock of hair off her forehead, giving a sharp laugh. "Well, not really. "That's why I'm here."

Rick tried to dodge the images that crashed over him - the throatiness of her laugh, the sleek feel of her body against his, the tight perfection of his inside her. She'd been his first love. Even if he told himself he'd forgotten her, he hadn't.

Whatever had happened, he couldn't take this case. Right now that was the only clear thing in his mind, but still he couldn't deny a burning curiosity to find out what she'd been doing the last ten years, where she'd been.

"We'll work that out." Was she married? Divorced? Children?

He didn't want to ask or even acknowledge the questions ricocheting through this mind, didn't want to admit to the heat and squeezed his chest at the thought of her with another man. He'd moved on.

He knew their relationship on her side had never been as committed as it had on his. After so long, it shouldn't make him wince that it had taken him an entire year to get rid of her engagement ring. "What's happened?"

"It's Grace." She hesitated then said, "She's missing."

"Don't start, Rick. This is serious."

"With your sister?" He arched a brow. "Since when?"

She gave him a flat stare.

"You're sure she didn't hook up with some guy at a bar?"

"I'm sure," she said tightly. "She's not like that anymore."

Rick couldn't even imagine such a transformation, but neither could he ignore the panic in Katie's eyes.

Indicating the straight-backed chair in front of his desk, he eased himself down into his own overstuffed gray leather chair, grateful for the support at his back." Tell me what happened."

Instead of sitting, she began to pace. Her soft cotton dress curled around her calves and clung to her lithe body, molding her perfect breasts. Rick forced his gaze to her face, picked up a pen and pulled a legal-sized notepad over to him.

"Can I get you something? Water, a Coke?" He was amazed at how calm he sounded, especially when he wanted to ask a million questions.
Do you still live in Tulsa? What have you been doing? Doyou ever regret turning me down?

She flashed him a tremelous smile, but her worry was tangible. "No, thanks."

He's smelled this same raw desperation before in each of the twenty missing persons cases he'd solved.

"I'm a flight attendant for TransAmerica. Yesterday morning, I returned from a layover in Miami. I had a message, only thirty minutes old, from the hospital on my answering machine. The nurse said Grace had been in a car wreck." Katie dragged an unsteady hand through her hair. Fatigue and worry drew her features taut, flattened the sweet curve of her full lips. "I raced over, but when I got there, Grace was gone."

"Did you check at the nurses' station? Maybe she--"

Kit shot him a look. "Of course. They told me they wanted to keep her overnight for observation, but she'd left with her husband, Tommy Harrington."

"No. Yes. Supposed to be getting a divorce."

"No." The word practically exploded from her.

Yes, that sounded like the Katie he knew. His mouth twisted, despite the satisfaction curling through him.

She shoved a hand through her hair again, then clasped her hands together. "Anyway, Grace just up and left with Tommy."

Which was just like Grace Foster, Rick reminded himself. "Maybe she got back together with her ex."

"She lives with me, I wouldn't known."

"Maybe she didn't want to tell you. She
used
to take off with one man or another a lot."

"What about that time she ran off with the high school quarterback? Steven Hughes?" Rick reminded her.

"They were in Mexico, plastered on margaritas and begging a priest to marry them when you found her."

That had been right after the death of Rick's grandfather. Katie had come home with him for the funeral, then left before it even started to chase after her sister.
Again.
Resentment curled through him. He thought he'd forgotten about that. Apparently not.