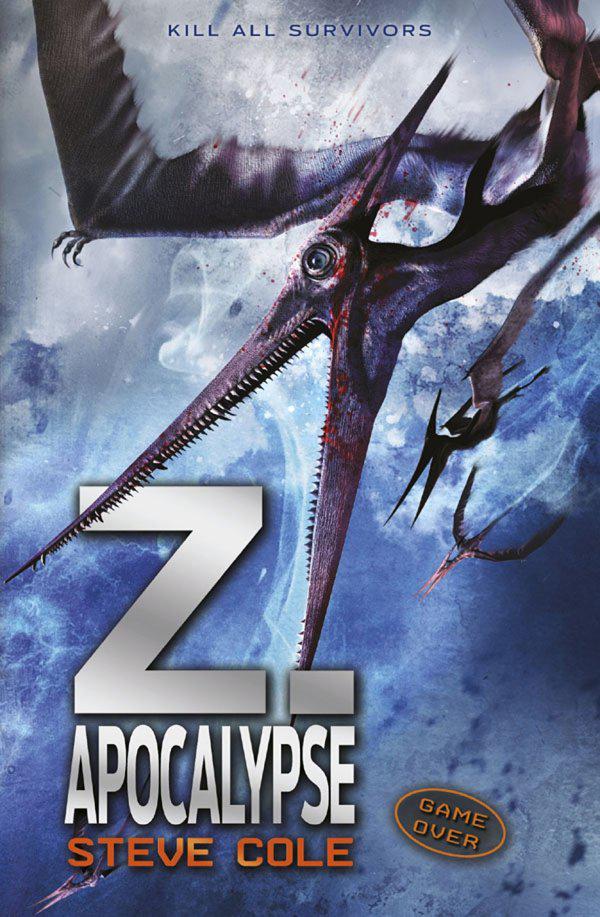 Chapter 3: In the Aftermath

Chapter 14: Over the Edge

Chapter 17: Looking at You

Chapter 18: In the Forest

Chapter 27: Back to Life

The destruction of the White House by prehistoric beasts marks the start of an incredible assault on the great powers of the world. Geneflow – the terrorist group forcing evolution into revolution – will not stop until humanity’s total destruction is assured.

Only Adam, a fourteen-year-old boy, holds the key to stopping them – and he must
travel to the ends of the earth to stop a nightmare vision of the future from becoming reality.

It seems impossible. But the return of an old ally makes it just possible that he might succeed . . .

I do not know how the Third World War will be fought, but I can tell you what they will use in the Fourth – rocks
!

And then his captor became visible.

It was a giant, birdlike monster with a body as big as an elephant and a face that was little more than a vast beak – easily big enough to swallow him whole with room to spare. The beast’s upper jaw ended in a kind of circular crest, crusted in blood. Its eyes shone black, each the size of a dinner plate. But it was the thing’s wings that held him transfixed
– colossal sails of scaly flesh rippling over an intricate framework of bone. Stretched out as it was, its wingspan was easily greater than a light aircraft.

Not just a pterosaur. A
Z.
pterosaur
.

THE CREATURE SOARED
above the ocean. Her wings were long lengths of leather and rust. Her great beak was pointed like a giant’s spear. She rode the thermal currents, the sun hot on her back, the salt wind cooling her belly.

There was still over an hour until the battle ahead; until then she had no orders to follow and could enjoy the freedom of flight.

The blue ocean flecked with white was a mirror to the sparsely clouded sky, as the kilometres clicked off one by one. A crosswind kicked in, buffeting her body; she beat the great fleshy sails of her wings to increase her speed.

On and on she flew, shutting out fatigue, dead on course.

When the distance between her and her target dipped below fifty kilometres, her brain clicked automatically
into battle mode. With a blink of her enormous eyes she switched to infrared vision,
seeking out heat traces in case the target was submerged. Her natural senses, enhanced in ways she didn’t understand, brought the scent of prey to her nostrils, the cold whirl of machinery to her ears. With a blink, she selected maximum magnification and zoomed in on the target area.

Something white and alien
floated on the water. A boat.

The scent of the sea was snuffed out in the rush of data; the sun’s warmth was lost as her blood temperature rose and her predator’s instincts kicked in.

The first hunt-and-kill tests had been games; no one got hurt, not for real. But now, playtime was over. There were three living things on board the boat; they had machines she knew could hurt her. She wondered
what the machines’ range would be, and fought to suppress her fear.

She was not allowed to be afraid. The surgeons had hacked fear from her brain along with all other emotions – or so they thought. She might act like a machine, but if the programmers realized she could feel like an animal as well, she would be recycled – thrown to the slavering monsters in the pit . . .

I want to live
, she thought.

As she closed the last few kilometres, her senses detected a missile incoming. Instantly she dived to a lower altitude, streaking seawards. She saw the steel
projectile hurtling towards her, locked onto her body heat.

Programmed strategies auto-loaded, screaming at her to accelerate, to fold the great sails of her wings close to her sides so that she became a kind of missile
herself, to push the air from her lungs in a long breath and then—

There was a booming hiss as she plunged into the sea. Her nostrils closed. Her lungs, emptied of air, gave her no buoyancy as she needled into the deep. The missile detonated behind her with a colossal blast that sent shockwaves down to the seabed and an enormous plume of water skywards. Buffeted by the vibrations she levelled
out and held her course, approaching her target now from below. The water was like a different sky. A liquid night, close and comforting around her . . .

Her super-sharp senses soon became aware of a new threat: a torpedo, pumping through the depths, its digital tracking systems seeking her out. Propelled by her long snaking tail she pushed down again, passing
500 metres below the surface, 600 metres . . . Computers in her mind told her the torpedo’s precision systems would stop working accurately below 800 metres—

A wave of anger damped down the data. So
many facts, they smouldered, filthy and foreign in her head.
Go down deeper
. She switched to true vision, turned off her battle systems. Suddenly she was alone. The blackness all around was soothing.
She could go deeper and deeper into this ocean of night and never come back . . .

Then the torpedo exploded and her sense of peace was torn apart. She was lost in a gale of pressure and heat. Pain stabbed from her head to her heart as the computers in her mind switched on in response, half drowning her with information. Terrified and angry, she began to beat her wings, propelling herself upwards.

No more debate, no more conflict.

It was time for the kill.

She broke the surface with a terrifying screech. Her prey stood on the deck of the assault craft – soft things, the weapons they clutched no use at all. Machine guns spat noise and bullets that only bruised and made her madder. One victim she clawed with flailing talons, another she smacked over-board with the sweep of a single wing.

The last soft thing kept firing; the idiot blare of his weapon driving her desire to kill. Her jaws closed on him, and she twisted her head. His spine snapped and the firing stopped.

She tossed the limp body into the water after the others of his kind, and hesitated. The sun was starting
to set. The air was cool. Besides the lap of the waves, there was silence.

She could
break off now, fly out of reach, make for whatever shore lay beyond the horizon . . .

But the programmers would know she had disobeyed. They could make her whole head burn with pain. Pain hard enough to kill.

She launched herself from the bloodstained boat and began the long flight back to her hidden home.
Hide what you are
, she told herself.
Wait
. With the completion of these kill-tests, the
work to end the world of flesh and fur would enter its final phase.

And with the last hunting, freedom would come.

Adam Adlar lay rigid on the couch as electrodes were fixed to his chest and forehead, his fists and feet. Wires trailed from the pads to a battered black console and a computer on a side table. There was little else in the meeting room: two hard-backed chairs and a desk.

You’re in a military base
, Adam reminded himself.
What did you expect – comfy sofas and a home cinema?

Adam shivered as his dad crowned him with a high-tech headset and finished hooking him up to the console. He tried to focus on the kind, careworn face, the grey eyes behind the round glasses, the thinning hair and frown-lines.

‘It’s just like playing another sim, right?’ Mr Adlar tried to give him an encouraging smile. ‘Gaming – the thing you love most, the thing you
do best. See if you can relax, OK?’

Adam closed his eyes, tried to think himself calmer.
Imagine you’re back home in Scotland, back in your bedroom
. . . He’d done that a lot lately. His room was a small, warm space painted blue and black, bulging with books and Blu-Rays and videogame boxes; a place that felt safe. Or as safe as anywhere could be after all he and his dad’d been through the last
year . . .

And now you’re going to relive the horror
, he thought.
See through the eyes of the monsters who almost killed you. And it’s all down to your genius games-architect father
. . .

Tension tugged Adam’s eyes back open. ‘You know, Dad, there are times when I wish you’d never invented Ultra-Reality.’

Mr Adlar nodded and muttered. ‘Me too, Ad. Just about each minute of every day.’

Adam
sighed. Ultra-Reality should’ve been so cool: a games console that drew you so far into the action, you actually
became
the character. Thanks to Mr Adlar’s incredible invention, the ‘Think-Send’ system, the only controller required was the gamer’s mind – you had only to
think
what you wanted the hero to do, and he would do it. It was revolutionary.

If the big games companies had bought into the
concept and funded his father’s work, U-R might have changed the games market for ever. Instead, broke and almost bankrupt, Mr Adlar had been forced to take cash from a shady organization
called Geneflow – whose directors had darker plans for this unique technology . . .

‘This simulation,’ said Adam, trying to keep the shake from his voice. ‘If the United States military found it in an abandoned
Geneflow base, why can’t they just try it out for themselves? Why drag the two of us eight thousand kilometres to Maryland to play it for them?’

Mr Adlar pulled off his glasses and rubbed his eyes. ‘The simulation the military recovered was damaged, Ad, it wouldn’t run properly. They’ve tried all kinds of players, but it seems no one can get the Think-Send system to work correctly.’ He grim-aced.
‘No one except maybe the boy whose brainwaves helped create that system, who’s more compatible with the technology than anyone on Earth.’

Blackmailed (Their Sins #1.5) by A. Gorman
Little Black Book (sWet) by Azod, Shara
Room to Breathe by Nicole Brightman
Rust by Julie Mars
Stranger in the Night by Catherine Palmer
Brain Rules: 12 Principles for Surviving and Thriving at Work, Home, and School by John Medina
Hidden Heart by Amy Patrick
Miss Mary Martha Crawford by Yelena Kopylova
Furnace 3 - Death Sentence by Alexander Gordon Smith
The Puzzle Lady vs. the Sudoku Lady by Parnell Hall
Our partner