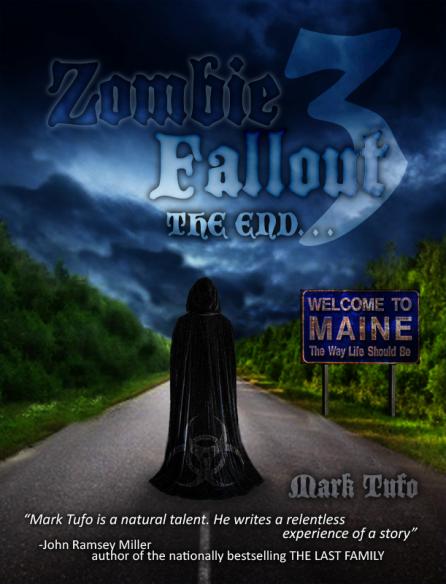 Zombie Fallout 3: The End… Continues Michael Talbot's quest to be rid of the evil named Eliza that hunts him and his family across the country. As the world spirals even further down into the abyss of apocalypse one man struggles to keep those around him safe. Side by side Michael stands with his wife, their children, his friends and the wonder Bulldog along with the Wal-Mart greeter Tommy who is infinitely more than he appears and whether he is leading them to salvation or death is only a measure of degrees.

Discover other titles by Mark Tufo

and
http://zombiefallout.blogspot.com/
home of future webisodes

My wife Tracy, my love, the rock around which my maelstrom revolves, I thank you, I love you and I appreciate you more than I can sometimes tell you. May we always make each other laugh.

My Dad whose unflagging love and belief in my ‘What me worry?’ attitude is a constant source of inspiration for me.

My Mom who passed in April of 2010, you will always be remembered.

My brother Ron who has devoted countless hours listening to my ideas and cleaning up my words that sometimes seem to be more thrown on the page rather than typed.

My editor Mo Happy, you dusted off this book and brought a high polish to it and in so doing have made a new friend and business partner.

My illustrator Zeilo Vogta, your work is amazing and I will always appreciate you picking up a dropped ball and running with it.

To all on FB who have friended me. Your messages, your reviews, your kind words, I thank each and every one of you.

There were some of you that came early and gave me a lift when I was feeling down. There were some of you that have helped me with particular questions or problems I may have had. One of you was the best boss I could have ever asked for, some of you have to work with me now and the even luckier ones are related to me (Sarcasm). But each and every one of you has at some point taken the time out of your busy days to reach out to me and say ‘Hi’ or ‘Love the book’ or ‘What were you thinking?’, to all of you, I would like to express my deepest gratitude.

War torn Europe in the early 1500’s was not a safe place to wander even during high noon. Tomas could not fathom why he was skulking in the shadows on this cold November night. Finding his sister as she passed from cruelty to cruelty had been an all-consuming endeavor. It had been five long years since they had sat together and shared a meal in their father’s small one room hut. They had clung to each other like only siblings could in a world so violent.

Tomas had wept for weeks when his father had sold his sister for some corn meal to help them get through the winter. For a year longer Tomas had suffered under his father’s severe tutelage in an attempt to beat out the ‘insanity’ in his own son. Tomas had finally had enough and ran away. Barely into his teens with no apprenticeship and no master, he narrowly scraped an existence. The meager gains he made were used for any information he could garner to find his sister.

Many times he had come close, only to have her whisked away to some distant town. He would doggedly follow but always a moment too late. Finally his break had come. He could see her at the end of the alleyway. He shook not only from the intense cold that blistered through his ragged garments but also for the joy of reuniting with his beloved sister. The dark cloaked figure she was with held Tomas at bay as he sent waves of malice radiating away. Tomas didn’t dare move from his concealment behind some crates. Fear jogged through his spine. The fluid that leaked down his leg was most likely the only thing that kept him from freezing where he crouched.

Tomas noticed the man look exactly where he hid, but that was impossible nobody could see him in this darkness. Tomas watched as The Stranger ‘kissed’ his sister’s neck. A flash of anger welled up in him. ‘How dare someone do that without a marriage first!’ He stood up just in time to see his sister swoon and fall. The Stranger looked back once at Tomas, laughed a small cruel laugh and then seemingly vanished into a darker shadow. All fear vanished with the removal of The Stranger. Tomas ran the length of the alleyway dropping to his knees to cradle his sister’s head.

Her eye’s fluttered open as he cascaded her face with his tears. “Tomas? Is that really you Tomas?”

“
Tomas.” Lizzie said sadly, stroking his face gently. “It’s too late for me.”

“
What are you talking about Lizzie? I’m here you’re here, we’re together.” He wept for joy, but something evil was coming he could feel it. Tomas had always had a highly developed sense of apathy. It had proved an invaluable tool while he lived on the fringes of a distraught society. “What is the matter Lizzie? You are burning up.” The heat emanating from her prone form was melting the snow around her.

“
You should go Tomas.” She said closing her eyes.

“
I can’t leave you Lizzie. We’re all we have, you and me. You told me you would always look out for me. You were the only one that told me I didn’t have witches living in my head.” It was common in early Europe to convict the mentally challenged of witchcraft. “I love you Lizzie.” Even as he said it, he could tell his sister was slipping away.

“
I love you too Tomas. And that is why you should go.”

“
Why won’t you open your eyes Lizzie? Please, please look at me.”

Tears pushed through her closed lids. “Please Tomas don’t look at me this way. I’m not the sister you used to know. Unspeakable things have been done to me and I found a way to right those wrongs and I took it. I will exact my revenge.”

“
That’s not how my Lizzie talks.” Tomas said wiping his blurring eyes.

“
GO!” She said pushing him away. Her eyes seemed to produce their own light as she looked at him menacingly.

“
I will not!” He screamed, even though his inner thoughts revolved around one word ‘RUN’.

Lizzie sat up. Factions warred within her. The looks she sent him fluctuated between love, sadness and predatory awareness. Tomas kept backing up even as he shook his head in denial of what was happening right in front of him.

With an ungodly speed Lizzie wrapped her hand around Tomas’ neck. He found himself suspended 6 inches off the ground.

Lizzie pulled him in close and punched two neat holes into his exposed collar. Tomas screamed in pain.

“
Lizzie please, I love you!” his tears splashing down on her upturned face.

Some last remnant of Lizzie rose to the surface. She pulled her extended canines out of his neck. “GO!” She screamed again. “I won’t be able to stop next time.” She looked defeated, with her head bowed. Tomas dropped to the ground as she released her grip.

He scurried away scarcely believing the turn of events. “I love you Lizzie, I will follow you until I find a way to fix whatever has happened here tonight.”

Eliza’s biting of her brother Tomas’ neck had profound effects on his physiology. It was not enough to ‘turn’ him into the monster she was to become but it nearly stopped his pineal gland in its tracks. Tomas would age but at a rate the giant sequoias in Northern California would envy. The link that Tomas shared with his family, not always willingly, intensified.

Over the years Tomas repeatedly sought ways to communicate with his sister, only to have every avenue closed to him. Eliza was stronger than him and would not allow the contact. But still he was aware of her presence and would follow her around the world hoping that one day she would once again sit with him and tell him bedtime stories. As for his clairvoyance? Who knows, maybe he does have ‘witches in his head.’

I swear to God I had better be dead if this, my third journal turns up and I’m nowhere to be found. My first journal sits in my office at whatever remains of my homestead in Denver Colorado. I had no time to save that book as zombies flooded through my master bedroom wall. As it was I lost Bear, the Rottweiler who had saved my life. My second journal, I was to learn, was burned with all the clothes that I had been wearing when that asshole Durgan shot me with a crossbow. Seems I had bled like a stuck pig and they did not want to risk infection from the clothing so they peeled me out of it and tossed it into an incinerator. Most likely the journal would have been unreadable coated in that amount of congealed leakage anyway, but maybe I would have been able to salvage some of it. So my dear fellow survivor IF you find this journal, you will notice I am dead because this thing will be stapled to my forehead and I’m not moving!

Kill the Ones You Love by Robert Scott
Hawke by R.J. Lewis
Melforger (The Melforger Chronicles) by Lundgren, David
The Sojourn by Andrew Krivak
An Apple Pie for a Duke by Ruby Royce
Constantine by John Shirley, Kevin Brodbin
Back in the Lion's Den by Elizabeth Power
The Evil B.B. Chow & Other Stories by Steve Almond
Counterfeit Countess by Lynne Connolly
Hammer of Angels: A Novel of Shadowstorm by G. T. Almasi
Our partner