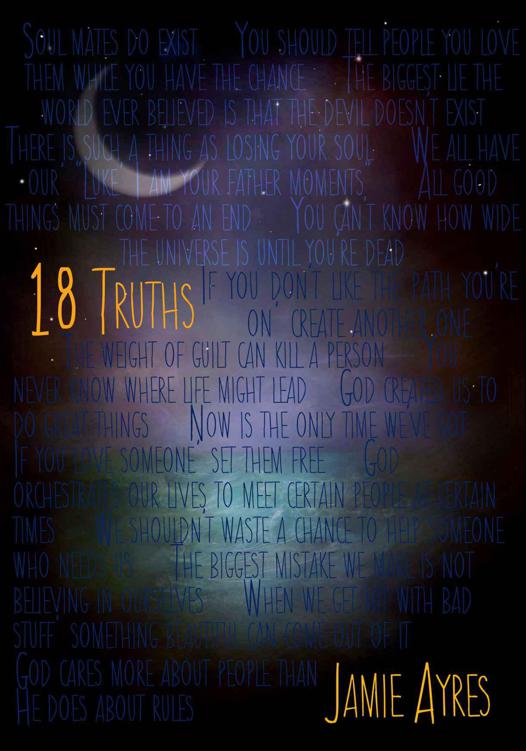 "A touching story that will make you cherish each day and the ones you love."
~Jaime Rush, New York Times bestselling author of the
Hidden
Series

"A haunting tale that had me smiling one moment and on the brink of tears the next."
~Heather Burch, critically acclaimed author of the
Halflings
Series

For GG, the real Olga Worontzoff. You are one of a kind. I’m sorry I never learned to count in Russian, but I hope this makes up for it in some small way. xoxo

“For, after a certain distance, every step we take in life
we find the ice growing thinner below our feet,
and all around us and behind us
we see our contemporaries going through.”
—Robert Louis Stevenson

ruth: Every morning when I woke up, the biggest truth I’ve ever faced landed like a grenade in my heart. I never said this when I had the chance: I love Olga Gay Worontzoff with all my heart, soul, mind, and body.

Okay, maybe not body because we never touched outside of handholding and hugs, and usually because tears were involved on her behalf, not in an “I want you” kind of way at all. But I digress, which happened a lot lately since there wasn’t much to do here other than have silly conversations with myself.

Now, where was I?

Oh, false: It’s better to keep your feelings to yourself so you don’t ruin your friendship. What a bunch of crap. I couldn’t believe for twelve years I freakin’ ate a pile of that shi—

Um, I mean, crap. That was one of Olga’s favorite words, a word I used a lot these days as I worked on my language.

It was all I thought about in Juvie. No, not sh—crap. Although maybe if I had said a few less ‘bad’ words, then maybe I wouldn’t have ended up here. But I seriously didn’t think the Big Man Upstairs cared so much about that stuff as he did people. Otherwise, he would’ve sent me straight to Hell like I probably deserved.

But, like I was saying, every morning I woke up after another weird dream that usually involved me yelling at Olga to hurry, like I was the white rabbit and she was Alice, and then my truth hit me again like a ton of bricks. I was dead, and I never once told Olga I loved her, was
in
love with her.

And now? Too late.

I didn’t know if she survived the freak boating accident on Lake Michigan that involved lightning and hypothermia and took my life, but even if she didn’t, she was in Heaven. I knew this because she was an angel even on Earth. But me? I was stuck in Juvie, one of the four realms of the Underworld, reserved for teenagers like me who were undecided about the whole God thing at the time of their unfortunate demise.

I squeezed my eyes closed, trying to shut out my agony. Here was another truth: there were tears after death, at least where I resided. Sean and Kyle would probably revoke my Man Card for admitting I cried, but I figured I had nothing to lose at this point. Okay, that was only half-true. I could still lose my soul.

Even if this part of the Underworld was temporary until judgment or whatever, there was a terrifying finality to it. I tried to focus on Godly things to get me through, but Olga filled my thoughts instead. Not always the PG version either.

Most people thought I wasn’t one. In a twisted turn of feminine power events, this girl Denise, who I had dated for three weeks during the beginning of junior year—an all-time record high for me—claimed we slept together after we broke up. I didn’t dispute the rumor because One, we did get about as close as you can get to sleeping with someone without actually doing the deed, and Two, why would anyone deny something like that?

I climbed off my cot in the darkness and stood. It was always dark here, with very little light. I paced around, going stir crazy once again.

I can’t take this anymore.

My roommate yawned luxuriously, and I was thankful for the sound of something real. I threw my pillow at him.

“Wake up, Sunshine!” His real name was Bo, a seventeen-year-old like me. He died in a car crash, so cliché.

Bo reciprocated my gesture, and a pillow fight ensued. “I was having a
really
good dream, Conner.”

Truth: all good things must come to an end.

“Sorry,” I told him. “But breakfast waits for no man.”

The Underworld would be unbearable if I didn’t have some friends here, but one thing I had always been good at was making people love me. I just sucked at loving them back. Loving someone required faith, something I obviously never had; otherwise, I wouldn’t be in this predicament right now. But I did have faith in Olga. Her friendship was like a good rock ballad, something I used to sing myself to sleep with to keep the nightmares away.

Bo and I headed outside. I never imagined the Underworld while I walked among the living, but even if I did, it wouldn’t have come close to this. Juvie kinda felt like being shipped to a boarding school for rednecks. You might be a redneck if… your parents send you to a boarding school where you live in tents. Yep, there was a bunch of tents for us to stay in. When I first arrived and met Bo, I observed, “Man, this place is intense.”

Ha ha ha! In tents=intense. Well anyway, he laughed and that pretty much sealed the deal on our bromance.

Everybody had a roommate in Juvie, an accountability partner as Leo stated. Leo was our angel headmaster, in charge of the two thousand teens housed in Camp Fusion. Juvie was divided into many camps with one angel in charge of each. My home at Juvie was just one small fraction of this plane. And if you thought two thousand teens were a lot to handle for one angel, then you haven’t met Leo. Besides, there was a lot less opportunity for sinning here, so two thousand-thirteen- to-nineteen-year-olds camping together wasn’t such a big deal. Since we were still fully human, with um, human desires, Leo said the same commandments we should’ve followed on Earth applied here.

There wasn’t much else Leo explained to us though, only that we weren’t fit for Heaven or Hell, so we were in a holding cell of sorts. We’d forever remain the age we were when we died, had daily assigned chores, and still attended school. Although there wasn’t much separation of church and state here. In fact, most of our studies focused around religion.

Bo and I made our way past the community bathrooms on our left, the red barn with animals in it to the right, and then headed down the path lined with fields of wild flowers. The actual school sat on a pristine lake that was always the perfect temperature for swimming despite the absence of the sun to warm it. Old oaks and manicured hedges lined the sidewalk leading up to the school’s front entrance. Just inside, to the left of the foyer, was the cafeteria.

I opened the glass door and called, “Honey, I’m home,” like I owned the place, because that was how I rolled. A year ago, when I stepped into Camp Fusion High for the first time, my arms and legs felt like Jell-O. I was terrified at the uncertainty of what might go down in Juvie. Plenty of time had passed since then, and I’d regained my title as Most Popular. Oh, sure, I went through all the phases before finally acclimating myself to this new environment—shock, disbelief, bargaining, guilt, acceptance. Waking up in a place like this had been a complete mindfreak. I still hadn’t made it around to hope yet. Hope would be seeing Olga again, and that was never going to happen. I’d heard of heartbreak, but I never knew your heart could literally break into a tiny million pieces, repeatedly, with each remembrance that the one thing you lived for was gone forever.

Damn, this sucked. I still couldn’t believe I’d never told her. I thought about that lame question teachers used to ask us as an icebreaker on the first day of school: “If you only had one day to live, what would you do?” I’d always come up with some bullsh—crap answer. Seriously, Leo should create some sort of shock collar for me to break my cursing habit. Must be the sailor in me.

If I could just have one more chance, I knew exactly what I would do: tell Olga I was in love with her. Hell, if she walked through the cafeteria doors right now, I’d probably drop down on my knees and ask her to marry me. Forget about the no marriages rule in Juvie.

I wondered if she had a man now, if she survived. She had to survive though, right? I should’ve had a lifejacket on. I remembered bits and pieces of that day. Maybe my submission to all things reckless had angered God and that was why I died. Olga had tried to save me, and I remembered that, too. She probably thought she failed, but then again, if I would’ve died a few years later, I wouldn’t have been a teenager anymore and would’ve been sent straight to Hell, so in a twisted way, she
did
save me. I still wasn’t very comfortable with this God stuff, but Bo told me that was okay. He said if we could just trust we were all here for a moment and that was real and something had to cause all that—then that made a great first step.

Markers (Joshua Stokes Mysteries Book 3) by Lila Beckham
Hers for a While by Danica Chandler
State of Emergency: Jack Emery 2 by Steve P. Vincent
When We Fall by Kendall Ryan
Death out of Thin Air by Clayton Rawson
Infinity One by Robert Hoskins (Ed.)
A Christmas Story by Jean Shepherd
Mommy Man by Jerry Mahoney
RedeemingZorus by Laurann Dohner
Alicia Jones 4: Enigma by D. L. Harrison
Our partner