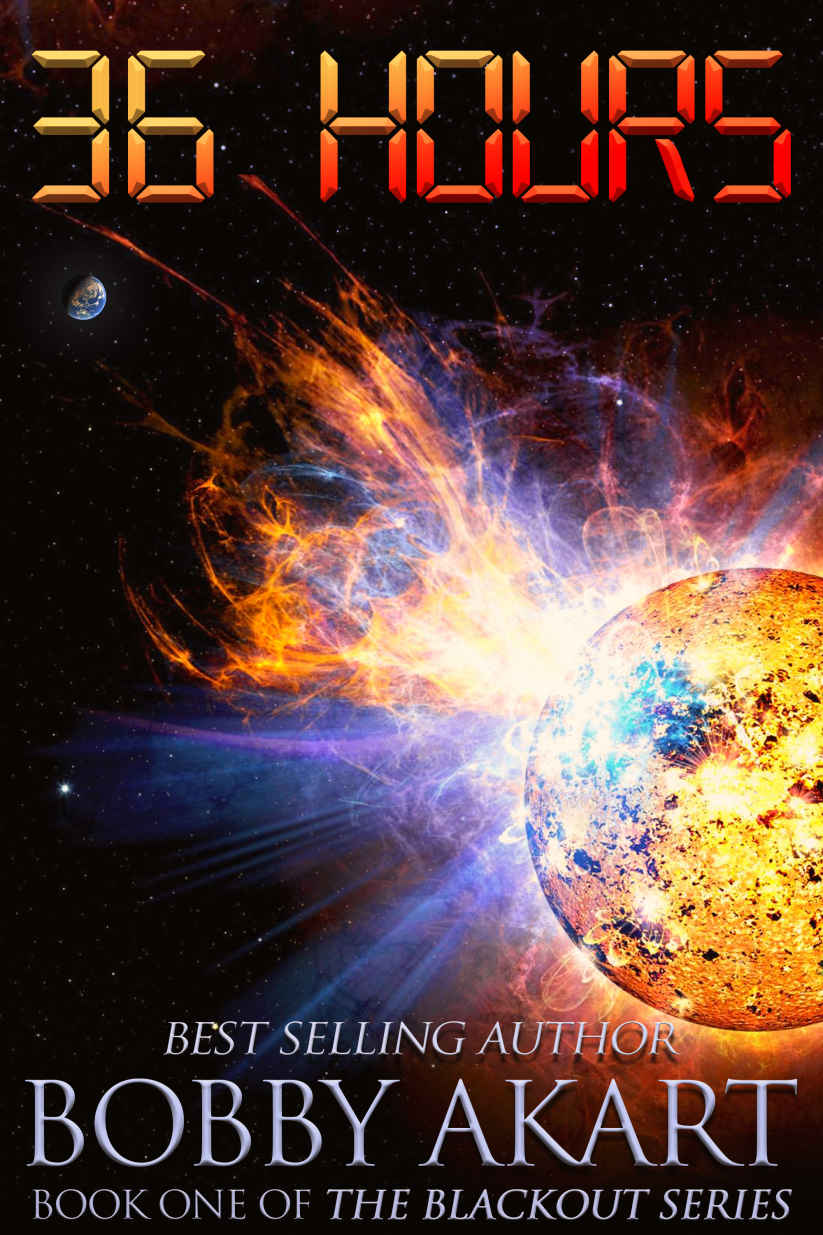 Thank you for downloading 36 Hours, Book One of The Blackout Series,

or visit me online at

The Prepping for Tomorrow Series

The Blackout Series, Book One

About the Author, Bobby Akart

About The Blackout Series

AN EXCERPT FROM EMP: ELECTROMAGNETIC PULSE

Chapter One Let’s Get Technical

Chapter Two What are the characteristics of a nuclear EMP?

Chapter Three What are the differences between a Nuclear EMP, a CME, and an RF Weapon?

APPENDIX B Space Weather: A Primer

To the love of my life, thank you for making the sacrifices necessary so I may pursue this dream.

To the Princesses of the Palace, my little marauders in training, you have no idea how much happiness you bring to your Mommy and me.

To my fellow preppers—never be ashamed of adopting a preparedness lifestyle.

Writing a book that is both informative and entertaining requires a tremendous team effort. Writing is the easy part. For their efforts in making The Blackout Series a reality, I would like to thank Hristo Argirov Kovatliev for his incredible cover art, Pauline Nolet and Sabrina Jean for making my important work reader-friendly, Stef Mcdaid for making this manuscript decipherable on so many formats, and The Team—whose advice, friendship and attention to detail is priceless.

The Blackout Series could not have been written without the tireless counsel and direction from those individuals who shall remain nameless at the Space Weather Prediction Center in Boulder, Colorado and at the Atacama Large Millimeter Array (ALMA) in Chile. Thank you for providing me a portal into your observations and data.

Lastly, a huge thank you to Dr. Tamitha Skov, a friend and social media icon, who is a research scientist at The Aerospace Corporation in Southern California. With her PHD in Geophysics and Space Plasma Physics, she has become a vital resource for amateur astronomers and aurora watchers around the world. Without her insight, The Blackout Series could not have been written. Visit her website at http://www.SpaceWeatherWoman.com.

About the Author, Bobby Akart

A five-time Amazon Top 100 Author and author of seven #1 bestsellers, in both fiction and non-fiction genres. Bobby Akart has provided his readers a diverse range of topics that are both informative and entertaining. His attention to detail and impeccable research has allowed him to write bestselling books in several fiction and nonfiction genres.

Born and raised in Tennessee, Bobby received his bachelor's degree with a dual major in economics and political science. He not only understands how the economy works, but the profound effect politics has on the economy as well. After completing his undergraduate degree at Tennessee in three years, he entered the dual-degree program, obtaining a Juris Doctor combined with an MBA—master of business administration—at the age of twenty-three.

His education perfectly suited him for his legal career in banking, trusts, and investment banking. As his career flourished, business opportunities arose, including the operation of restaurants and the development of real estate. But after meeting and marrying the love of his life, they left the corporate world and developed online businesses.

A life-changing event led them to Muddy Pond, Tennessee, where he and his wife Dani lead a self-sustainable, preparedness lifestyle. Bobby and his wife are unabashed preppers and share their expert knowledge of prepping via their website www.FreedomPreppers.com.

Bobby lives in the backwoods of the Cumberland Plateau with his wife, and their two English bulldogs, aka the Princesses of the Palace.

SIGN UP FOR
EMAIL UPDATES
and receive free advance reading copies, updates on new releases, special offers, and bonus content. You can contact Bobby directly by email ([email protected]) or through his website
www.BobbyAkart.com

About The Blackout Series

WHAT WOULD YOU DO

for a catastrophic event of epic proportions . . .

This is a true story, it just hasn't happened yet
.

The characters depicted in The Blackout Series are fictional. The events, however, are based upon fact.

This is not the story of preppers with stockpiles of food, weapons, and a hidden bunker. This is the story of Colton Ryman, his stay-at-home wife, Madison, and their teenage daughter, Alex. In 36 Hours, the Ryman family and the rest of the world will be thrust into the darkness of a post-apocalyptic world.

A catastrophic solar flare, an EMP—a threat from above to America's soft underbelly below—is hurtling toward our planet.

The Rymans have never heard of preppers and have no concept of what prepping entails. But they're learning, while they run out of time. Their faith will be tested, their freedom will be threatened, but their family will survive.

An EMP, naturally generated from our sun in the form of a solar flare, has happened before, and it will happen again, in only 36 Hours.

This is a story about how our sun, the planet's source of life, can also devastate our modern world. It’s a story about panic, chaos, and the final straws that shattered an already thin veneer of civility. It is a warning to us all ...

never underestimate the depravity of man
.

What would you do when the clock strikes zero?

Note
: This book does not contain strong language. It is intended to entertain and inform audiences of all ages, including teen and young adults. Although some scenes depict the realistic threat our nation faces from a devastating solar flare, and the societal collapse which will result in the aftermath, it does not contain graphic scenes typical of other books in the post-apocalyptic genre.

There’s not much between us & the horrors underneath, just about a coat of varnish.

TEOTWAWKI—The End of The World As We Know It

It is not, however, the end of the world.

By failing to prepare, you are preparing to fail.

I would rather be wrong and alive, than oblivious and dead.

Because you never know when the day before

is the day before.

From the ground, space looks like a pristine void—fascinating, miraculous, serene. But the Earth’s orbit is actually a very crowded place inhabited by twenty-four hundred satellites and many thousands of pieces of space junk.

The altitude above the planet containing the vast majority of this debris, and some of mankind’s most used spacecraft, is between one hundred miles and twelve hundred miles above the Earth’s surface. This is known as the low Earth orbit, and it’s home to the International Space Station.

As was customary, after the Kosmos-2251 had been deactivated, it was left in Earth’s orbit as space debris. On February tenth of that year, the Iridium-33 sped through its orbit five hundred miles above Earth at approximately twenty-six thousand miles per hour.

NASA estimated the collision, seen by amateur astronomers from Japan to Europe, created over a thousand pieces of debris. Russian and Chinese scientists immediately warned all relevant space agencies worldwide that the debris would pose a threat to satellites and the International Space Station.

Death and the Olive Grove by Marco Vichi
His Abducted Bride by Ruth Ann Nordin
Christine by Steven King
Love Collides (Fate's Love #3) by L.A. Cotton
The Journey of Josephine Cain by Nancy Moser
Reprobates by Bridgestock, RC
Let It Burn by Steve Hamilton
Dead Highways (Book 2): Passage by Brown, Richard
The Book Without Words by Avi
Don't Cry for Me by Sharon Sala
Our partner