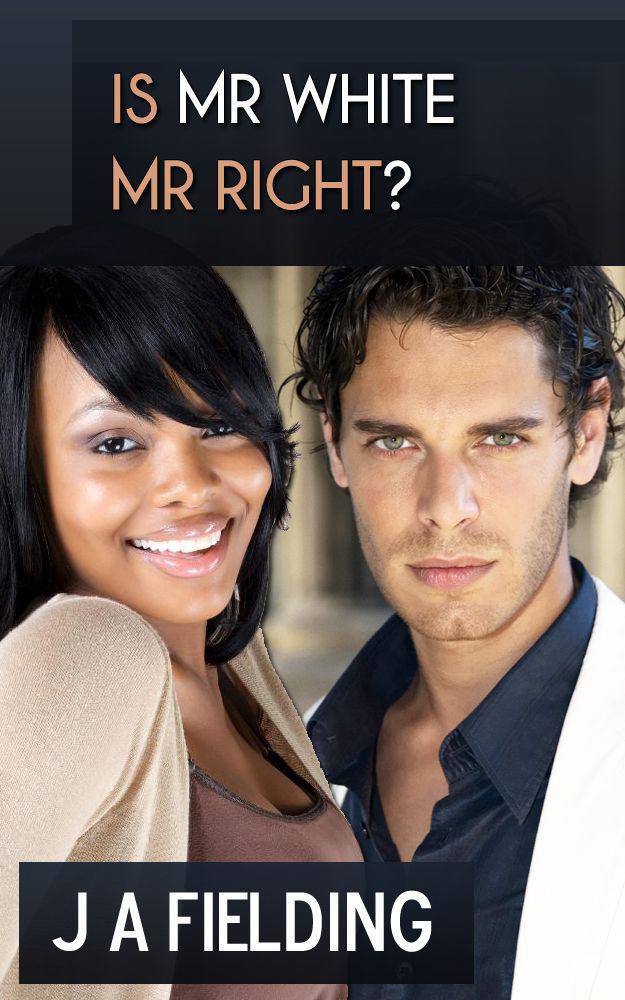 Is Mr White Mr Right?
A interracial BWWM romance by J A Fielding

“The author of 'Why Do I Like White Men?' does it again!”

More Books By J A Fielding

About J A Fielding

Natasha Black checked her phone again. She could not believe that Jay was late, again. He was always late. Even when she gave him an hour’s head start, he would still be late. She took a deep breath as she dialed his number. “Where the fuck are you Jay?” she asked

“
I’m sorry baby, I’ll be there in ten.” He said. Natasha sighed again as a waiter approached her table. “
Why am I even here?”
she wondered. She knew she had made a mistake as soon as she accepted a dinner invitation from her ex Jay.

“
Oh yeah,” she answered. “Get me a nice glass of red wine, your choice,” she said as she looked at the menu. “Oh wow, the chef’s special is the chicken and chorizo jambalaya?” she asked in excitement.

“
Alright, change up,’ she said as she handed him back the menu. “A nice cold glass of chardonnay and some of that jambalaya,” she added with a smile. The waiter bowed respectfully and walked off. “
Maybe it’s time I officially ended things with Jay,”
she thought.

The two had been together for a little over two years before she finally called it quits. The last year of the relationship had been characterized by fights and trust issues. That was just too much for Natasha to handle but she still had a weakness for him and he knew it.

“
Maybe that was why he knew that I would agree to meet him today,”
she thought angrily. “
Dumb ass
.” A few months back, she had decided to jump back on the dating horse but it was not as easy as she thought it would be.
Everyone she tried dating was simply put, a train wreck. They were either too high or out to get laid. These were not people she wanted to be in a relationship with.

Today would have been the third month since she spoke to Jay and she was unsure what they would talk about. I mean it had been three months. From the corner of her eye she noticed Jay coming in as the waiter walked towards her with a bottle of Chardonnay.

“Hey baby,” he said smoothly. Natasha looked at him as the waiter poured her a glass.

“
Don’t hey baby me, fool,” she said angrily in a hushed whisper. “I have been here for almost half an hour ….what were you doing anyway?” she asked as he took a seat. By this time, the waiter was already heading back to their table with Natasha’s jambalaya.

“
You ordered already?” he asked as she elegantly draped the napkin on her thighs.

“
I was here for thirty minutes Jay,” she said leaning forward so he could hear the urgency in her voice without her shouting. “
Thirty,”
she said again hoping he got the point.

“
Anything for you sir?” the waiter asked as he handed him the menu. Jay skimmed through the contents and sighed.

“
Typical,”
Natasha thought. “
You couldn’t decide what color of underwear you wanted if your life depended on it.”

“
I’ll have what she’s having,” he said finally. “And maybe some red…no..white…what is she having?” he asked.

“
Chardonnay, sir,” the waiter answered. Natasha looked at him as she took a bite of her jambalaya.

“
Yes that will do,” Jay, said giving back the menu. “Or….” “…for the love of God Jay have the damn Chardonnay,” Natasha cut him short as the waiter walked off. He mouthed a ‘thank you’ to her as he walked away.

“”
So, how you been ma,” he asked in a soft sexy voice. Natasha rolled her eyes. She was not going to fall into this trap. Not again. Jay almost always managed to get back in her good graces by his words.

“
Don’t do that,” she said as she sipped her wine. “You know you are not in my good books right now,” she snapped.

“
I know and I am sorry,” he said with a smile. He looked at her hoping that she would smile back but she wouldn’t barge. “Come on, Tasha. Give us a smile,” he pleaded.

“
What for?” she asked taking another bite, acting as if what she had just said didn’t matter at all. “We both know it won’t go very far in changing you,” she added. Jay took a deep breath.

“
Unlike you, I do not procrastinate,” she answered curtly. She was not about to give this to him on a silver platter.

“
Let’s just enjoy the dinner first then talk,” he said as he began eating.

“
Oh please, Jay,” Natasha said. “I am enjoying my dinner just fine,” she said. “And we both know that you are always too busy for me,” she added.

“
Come on, that’s not true,” he said. Natasha looked up and gave him a scornful laugh.

“
Really,” she said leaning back in her chair. “When was the last time you made time from your busy schedule to spend time with me?” she asked. Jay looked down at his plate. She had him cornered between a rock and a hard place. “I know Jay, three weeks ago and that was after I pressured you,” she said finally.

“
Yeah about that….” “…you better make up your mind whether you want to be with me or not,” she cut him short.

“
Whoa, baby hold up,” Jay said holding up his hands. “Are you serious?”

“
Tell me Jay, do I look serious enough to you?” she asked looking straight at him. Jay reached for her hand and looked at her.

“
Why would you want to do that to me?” he asked in a soft voice. She looked back at him, this time unable to keep up the tough act. “You know I’ve got nothing but love for you,” he said looking into her eyes. She pulled her hand away and went on eating. Jay knew that this was just a ploy for her to avoid eye contact.

“
Then you better get your shit together Jay,” she said her voice almost quavering.

“
Ready to go?” he asked after about another hour and a half. She pushed the plate away and took a final sip. Jay took that as a yes and signaled the waiter for the check. “Did I tell you how hot you looked today?” Jay asked her as they headed toward the parking lot.

“
You know what Jay, you forgot that little but important fact,” she said with a smile as they approached his car.

“
Well allow me to apologize,” he said pushing her against the car He smiled down at her as he brought his face down for a kiss. She felt a wave of energy go through her as their lips met. It had been almost a month since they last had any form of intimacy. She raised her arms and wrapped them around his neck as he slipped an arm around her waist.

As they kissed she could feel her nipples harden against the flimsy material of her silk blouse. She felt his hand ran up the small of her back then all the way down to her ass. She whimpered when she felt him squeeze her ass. He then trailed his lips to her neck where he let his tongue follow the contours of her slender neck.

“Is this your idea of an apology,” she asked in a low voice as he went on nibbling at her neck.

“
Oh yeah,” he said quickly as he fumbled with the car door. He gently pushed her inside and followed quickly just in case she changed her mind.

“
We cannot do this, Jay,” she said as he brought his face down on hers.

“
Shhh, no talking,” Jay said as he engaged her lips again, his hands softly making her run wild. She was whimpering and moaning against his lips as he gently made her lie on the back seat. He went back to kissing her neck while one of his hands found its way under her skirt. She twitched when she felt his hands make contact with her pussy.

“
Jay please….” She started slowly as he playfully stroked her cunt. “
Don’t let him back so easily Tasha,”
she scolded herself as his other hand kneaded her breast. He was almost pulling her panties off when the shrill ring of her cell phone ruined the moment.

“
Hey Tasha,” her father Eric said. “What’s going on? Have you been running?” he asked concerned.

“
Shit!”
she thought. “No, just thought I’d hit the gym,” she said looking at Jay. “But I just ran into Jay, he’ll be dropping me home,” she added giving Jay a ‘you-better-do-it-or-else’ look.

“
See you soon then,” Eric said before hanging up. Jay gave her a smile and moved closer to her.

“
Where were we?”: he asked as he brought himself forward to kiss her again. She pushed him off as she adjusted the buttons on her blouse.

“
You were taking me home,” she said as she jumped to the front seat. Jay looked at her in disbelief.

“
Yes, really,” she said giving him the same sharp look as she had earlier. Jay knew he was already fighting a battle he could not win. He jumped to the driver’s seat and put the key in the ignition. “You still have my gym bag in here right?” she asked as she fixed her hair. “I would hate for daddy to know that I’ve been lying,” she added fastening her seat belt. Jay took a deep breath.

“
It’s in the trunk,” he said as he started driving away. Natasha smiled to herself. It was about time Jay realized that she wasn’t a toy. She would hold off till he begged.

On Thursday morning, Natasha looked at her reflection in the mirror and then at the humongous pile of clothes on her bed then sighed. She had no idea of what to wear and this was not one of the days you throw an outfit together. Today would be her third and final interview with Nolan Schmidt Communication Solutions, a media company in….no her dream media company. It the only media company she knew that was all rounded. Television, radio, public relations and advertising. NSCS was one of the most reputable media companies she knew. She was always afraid that she would never make the cut.

The dress was the perfect contrast to her light African American skin tone. The pencil design of the skirt made her hips and well rounded ass seem exceptionally beautiful. The v-neck was definitely showing off her big tits. She took a red and black polka dotted scarf and gracefully laid it on her shoulders. It would match her shoes and shut nan up about her revealing dress. She always had something to say about her clothes. The nerve.