Read A Bit of Difference Online

A Bit of Difference 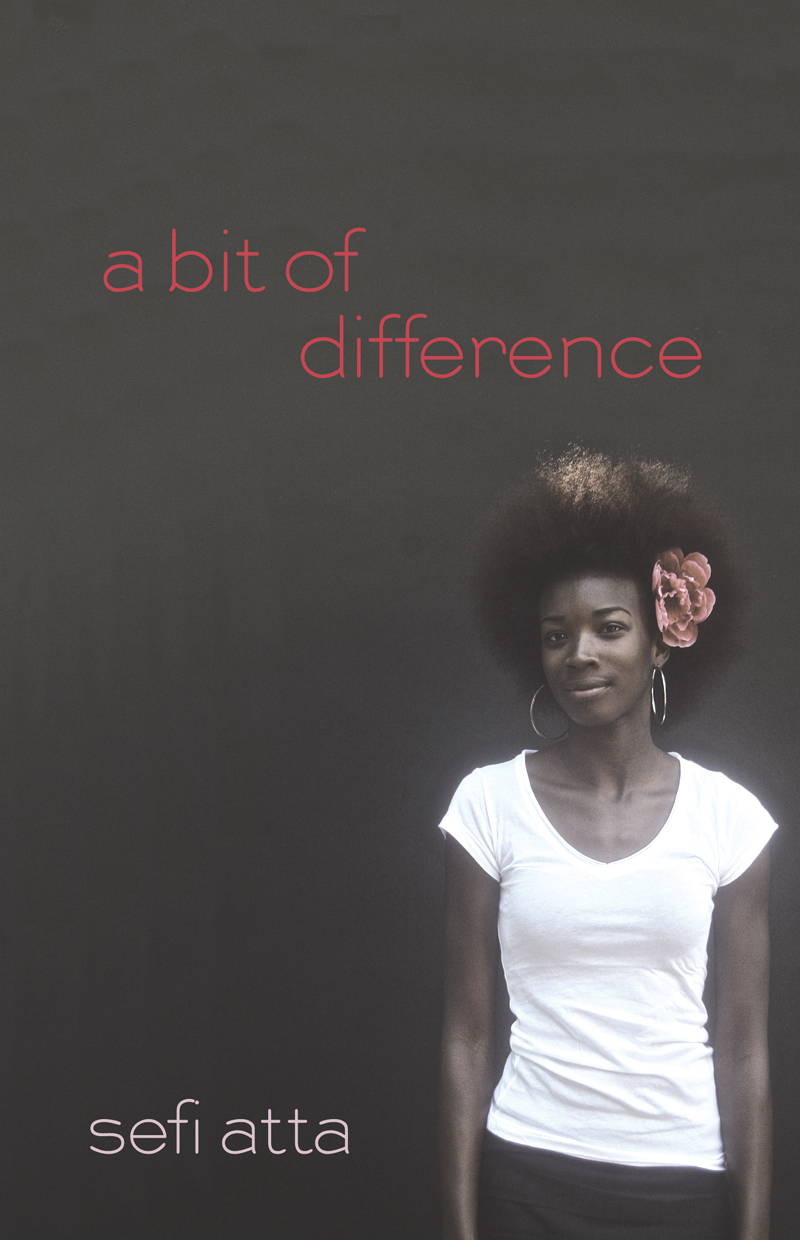 Praise for
Everything Good Will Come

“A literary masterpiece...
Everything Good Will Come
put me into a spell from the first page to the very last... It portrays the complicated society and history of Nigeria through... brilliant prose.”

“Skillful â¦ impressive debut novelâ¦Thematically, her work is wide-ranging and yet powerfully focused, the different areas of concern drawn together so that they inform each otherâ¦ Again and again Atta's writing tugs at the heart, at the conscience. At the same time, reflecting the resilience of the Logosians whose lives she explores, humor is almost constant, effervescent, most often with a satirical slantâ¦ There are no delusions in Atta's novel, no romanticisation or overstating of a case. Her work stands as a paean to her central character's strengths and her determination to combat oppression.”

Praise for
News from Home

Winner of the NOMA Award for Publishing in Africa

“Atta demonstrates a fresh, vital voice in these 11 stories that move fluidly between pampered Nigerian Ã©migrÃ©s and villagers grinding out a meager
subsistence. Atta's characters are irrepressibleâ¦ Atta movingly portrays these conflicted lives and gorgeously renders a wide spectrum of humanity and experience.”

“Nigerian-born Atta's prize-winning novel,
Everything Good Will Come
(2006), was about a young woman's coming-of-age in Lagos. Now Atta lives in the U. S., and this powerful collection is about the search for homeâ¦ Never messagey, the wrenching contemporary stories are universal in their appeal and impact.”

“Sefi Atta's steady, quiet, and yet bold narrative voice is unwavering in its dedication to craft, originality, and last but not the least, truth. Truth, that is, in artistic rendition of our lives. (She) writes like one who has lived the life of each single character in her dazzling collection of short stories. The reader comes off with the sense of a story teller who is so in tune with the suffering and other life happenstances of her characters, that the reader is bound to find a commonality with themâbe it cultural, psychological, social, or human.”

âMohammed Naseehu Ali, author of
The Prophet of Zongo Street

“In Atta's spirited and large-hearted second novel (after the collection,
News from Home
), two young woman office workers navigate the rapids of the urban jungle of Lagosâ¦ Tolani's tale encompasses towns and villages, corruption and superstition, deceit and loyalty, all beautifully layered and building toward a wallop you never see coming.”

“Nigerian-born Atta, now living in the U. S., excels at telling stories of her native land, this time centering on bank clerk Tolani Ajao and Rose, her friend, roommate, and colleague at Federal Community Bank in Lagos, with interspersed accounts by Tolani's mother, Arike, in her native village of Makokuâ¦ Atta captures the sights, sounds, and smells of her native land in the 1980s, with its War against Indiscipline in effect, as it straddles Western ways and native customs. A meandering novel with a painful punch.”

a bit of
difference
sefi atta

All rights reserved. No part of this publication may be reproduced in any material form (including photocopying or storing it in any medium by electronic/digital means and whether or not transiently) without the written permission of the copyright owner. Applications for the copyright owner's written permission to reproduce any part of this publication should be addressed to the publisher.

To order or request our complete catalog,
please call us at 1-800-238-LINK, or e-mail: [email protected]

For my father Abdul-Aziz Atta,
forty years in memoriam.

T
he great ones capture you. This one is illuminated and magnified. It is a photograph of an African woman with desert terrain behind her. She might be Sudanese or Ethiopian. It is hard to tell. Her hair is covered with a yellow scarf and underneath her image is a caption: “I Am Powerful.”

An arriving passenger at the Atlanta airport momentarily obscures the photograph. She has an Afro, silver hoops the size of bangles in her ears and wears a black pin-striped trouser suit. She misses the name of the charity the photograph advertises and considers going back to get another look, but her legs are resistant after her flight from London and her shoulder is numb from the weight of her handbag and laptop.

She was on the plane for nine hours and someone behind her suffered from flatulence. The Ghanaian she sat next to fell silent once she mentioned she was Nigerian. At Immigration, they photographed her face and took prints of her left and right index fingers. She reminded herself of the good reasons why as she waited in the line for visitors, until an Irish man in front of her turned around and said, “This is a load of bollocks.” She only smiled. They might have been on camera and it was safe for him, despite the skull tattoos on his arm.

I am powerful, she thinks. What does that mean? Powerful enough to grab the attention of a passerby, no doubt. She hopes the woman in the photograph was paid more than enough and imagines posters with the prime minister at Number Ten and the president in the Oval Office with the same caption underneath, “I Am Powerful.” The thought makes her wince as she steps off the walkway.

She has heard that America is a racist country. She does not understand why people rarely say this about England. On her previous trips to other cities like New York, DC, and LA, she hasn't found Americans especially culpable, only more inclined to talk about the state of their race relations. She has also heard Atlanta is a black city, but so far she hasn't got that impression.

At the carousel, a woman to her right wears cowry shell earrings. The woman's braids are thick and gray and her dashiki is made of mud cloth. On her other side is a man who is definitely a Chip or a Chuck. He has the khakis and Braves cap to prove it, and the manners. He helps an elderly man who struggles with his luggage, while a Latina, who looks like a college student, refuses to budge and tosses her hair back as if she expects others to admire her. There is a couple with an Asian baby. The baby sticks a finger up her nostril while sucking on her thumb.

It takes her a while to get her luggage and she ends up behind a Nigerian woman whose luggage is singled out for an X-ray before hers is.

“Any
garri
or
egusi
?” a customs official asks the woman playfully.

“No,” the woman replies, tucking her chin in, as if she is impressed by his pronunciation.

“
Odabo
,” the customs official says and waves after he inspects her luggage.

The woman waves back. The camaraderie between them is tantamount to exchanging high fives. Before 9/11 he might have hauled her in for a stomach X-ray.

“Will you step this way, ma'am?” he asks, beckoning.

Walking into the crowd at the arrival lobby makes her eyes sting. She always has this reaction to crowds. It is like watching a bright light, but she has learned to stem the flow of tears before it begins, the same way she slips into a neutral mood when she sees Anne Hirsch holding that piece of paper with her surname, Bello. She approaches Anne and can tell by Anne's involuntary “Oh,” that she is not quite the person Anne is expecting.

“It's nice to meet you,” Anne says, shaking her hand.

Anne is wearing contact lenses. Her gray hairs are visible in her side part and the skin on her neck is flushed. She looks concerned, as if she is meeting a terminally ill patient.

Anne may well begin to curse and kick and Deola would merely take a step back. It surprises her how naturally this habit of detaching herself from her colleagues comes. They walk outdoors and into the humidity and racket of the ground transportation zone, two women in sensible suits and
pumps. Anne waddlesâshe is pigeon-toedâand Deola strides as if she has been prompted to stand up straight.

“How was your flight?” Anne asks.

Lying like this is also instinctive. She wouldn't want to come across as a
whiner. A bus roars past, the heat from its exhaust pipes enveloping them.

“Did you get enough sleep?” Anne asks.

Deola's face has revealed more than she would like. They head toward the loading bay as Anne suggests she go to her hotel and start her review the next morning.

“If that's all right with you,” she says.

She has been working at LINK for three months, following a lackluster stint in a consultancy that specialized in not-for-profit organizations. LINK, an international charity foundation, has a hierarchy, but not one that encourages rivalry as the accountancy firm she trained in did. LINK's money comes from well-meaning sources and goes out to well-deserving causes. She is the director of internal audit at the London office and Anne is the director of international affairs at the Atlanta office.

Anne leaves her at the loading bay and returns with her car, a
cream-colored Toyota Camry. The mat on Deola's side of the car is clean compared to Anne's, which is covered with
sand. Anne has changed into sandals and her feet are pale, even though it is summer.

“So how is Kate doing?” she asks, as she drives off.

Kate Meade is Anne's counterpart in the London office. She is pregnant with her second child and was sick with toxoplasmosis.

“It must be catching,” Anne says.

“No, pregnancy, I mean. When last we spoke she said someone else in London has been on maternity
leave. Pamela?”

“It must have been hard, with all the absences.”

“Pam will be back soon.”

Deola could be more forthcoming, but she prefers not to talk about her colleagues. Pam is on maternity leave until the end of the summer. The administrative department has been in a state of backlog. There was some talk about hiring a temp, but Kate decided not to. They had a temp from New Zealand once before and he took too many smoke breaks.

“Ali and I would like to have one,” Anne says. “What did Pam have?”

Six Days With the Dead by Stephen Charlick
Dark Tendrils by Claude Lalumiere
More Than Him by Jay McLean
Red Sox Rule by Michael Holley
Dawn Autumn by Interstellar Lover
Eat Pray Love Made Me Do It by Elizabeth Gilbert
Exposed by Lily Cahill
When Magic Dares (Darkly Fae Book 2) by Tera Lynn Childs
The Republic of Pirates: Being the True and Surprising Story of the Caribbean Pirates and the Man Who Brought Them Down by Woodard, Colin
Countess of Scandal by Laurel McKee
Our partner