A Darker Shade of Midnight 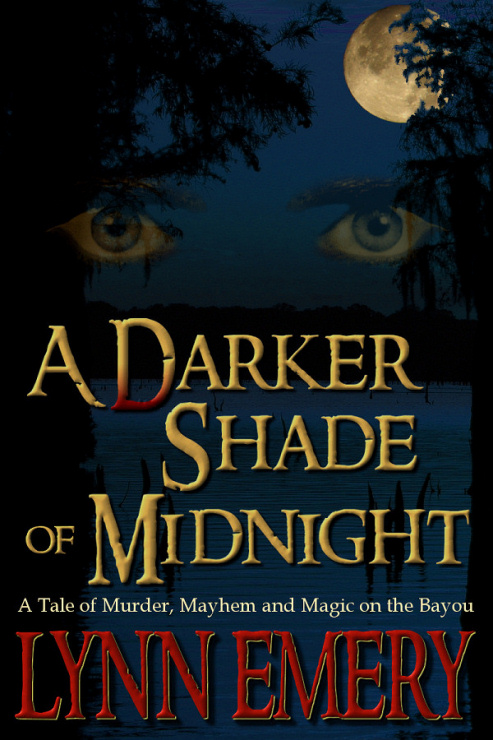 A DARKER SHADE OF MIDNIGHT

All names, characters, stories, and incidents featured in this novel are imaginary. They are not inspired by any individual person, incidents or events known or unknown to the author. Any resemblance to actual persons living or dead is coincidental

Read the next LaShaun Rousselle Mystery

Between Dusk and Dawn

Follow these links to learn more about Louisiana, our culture and other people, places and things mentioned in this story:

I created the small town of Beau Chene in Vermillion Parish. My fictional creation is more a cross between
New Roads, Louisiana
and
New Iberia, Louisiana
. Here you can read the history of the real area called Beau Chene.

LaShaun lit a long tapered white candle on the altar and sat down on a bench near the front of The Immaculate Heart of Mary Church in Los Angeles. The white marble statue softly reflected dozens of flames. The Virgin Mary looked down with a serene expression of acceptance and forgiveness. No matter what sins those who sought refuge had committed, she was willing to absolve. LaShaun tried to pray, but the words stuck in her throat.

“Hello, child,” a quiet voice spoke with the lilt of a Latino accent.

The rustle of fabric caused the flames to waver. LaShaun looked up. The nun wore an expression not unlike the statue before them. Even at fifty Sister Adalia had the smooth brown skin of a woman ten years younger.

“I’m okay, Sister.” LaShaun started to stand, but a light touch on her shoulder from the nun’s hand stopped her.

“You’re here because your heart is at peace?”

“You know me too well,” LaShaun replied with a smile that soon faded. “I have to go home.”

“I see.” Sister Adalia sat next to her with a soft sigh. “You’ve come a long way, not just in miles. Maybe it’s time.”

“Monmon Odette needs me. No matter what our differences, she loves me. But if I go back… will I be tempted to slip into my old ways?” LaShaun fingered the red onyx beads of the bracelet on her right wrist. The golden cross that dangled from it felt comforting against her skin.

“And the spirit I summoned?” LaShaun whispered the forbidden truth that she had shared with Sister Adalia. Only one other person knew, Monmon Odette.

“We humans do more than enough evil on our own. Don’t give the devil and his minions so much credit.”

“You and I know there are angels. There are demons at work in the world as well. My family has mixed the old religions from Africa with Catholicism for generations. More than a few of us have paid the price. I can’t run from fate anymore.” LaShaun bowed her head.

“You needed that time and distance to find yourself. The strength of your ancestors is in your blood.” Sister Adalia looked at the cross that hung on the wall in an alcove behind the altar.

“I hope you’re right, sister.” LaShaun raised her head to look at Sister Adalia, and then followed her gaze to the cross.

“Now faith is the substance of things hoped for, the evidence of things not seen,” Sister Adalia quoted the scripture in a reverent tone.

“The old religion warns there is a price to pay for dealing with spirits. So does the Bible.”

“Our Blessed Mother will protect and guide you. Of that I’m sure. However, if you need a human ear, call me. Better yet, send a text or a tweet. I’ve got my new smart phone. ” Sister Adalia patted the pocket of her dark blue jumper.

“Our order already has a Facebook page,” Sister Adalia said, laughing with her. They stood together and walked to the altar filled with lit candles.

“Thank you for being my friend.” LaShaun squeezed her hand.

Before LaShaun could respond a gust of warm air pushed down the center aisle of the pews. The candle flames danced crazily, but didn’t go out. The lights of the church dimmed and long shadows on the walls gave the impression of a crowd in the sanctuary. Sister Adalia gasped and made the sign of

the cross. The warmth changed to a chill in seconds. Then the light grew strong again.

“May God be with you.” Sister Adalia let go of LaShaun’s hand. Her dark eyes sparkled with alarm.

With a nod goodbye, LaShaun left the church and went out into the crisp night air. She drove to the townhouse where she lived in the bedroom community of Hawaiian Gardens, California outside Los Angeles. She opened the front door just in time to pick up the ringing phone. A family member told her what she already had sensed. There were dark, sad days ahead.

LaShaun sat calm amid the bustling activity at the small sheriff’s station. Apparently, folks got into a lot of mischief Saturday nights on the bayou. Despite being so busy, the deputies and civilian employees found time to shoot sideways looks in her direction. Likely only a few actually needed to be near the area where she was seated. With the exception of Deputy Myrtle Arceneaux, the only black female deputy on the force. Her copper brown skin blended with the tints in her hair. No doubt she had the duty of making sure LaShaun
did not attempt to leave the premises. Deputy Arceneaux sat at a nearby desk rustling paperwork. Deputy Chase Broussard had pulled her over then had her follow him to the station.

He was somewhere trying to figure out a way to charge LaShaun with a crime serious enough to make her spend the night in jail.

LaShaun wore an impassive expression, a skill she had learned as a girl at her grandmother’s knee. Lucky for them Monmon Odette was seventy-seven and ailing or she’d have show up to quietly scare the jeebies out of them. Her ability to exact revenge using voodoo was legendary in Vermillion Parish, Louisiana. Monmon Odette loved playing the part of a modern Marie Leveau. Despite her circumstances, LaShaun laughed softly at the memory of how her grandmother relished the notoriety, and used it to great advantage. LaShaun fingered the necklace she wore.

The young secretary seated at the front desk stared
.
She seemed fascinated by the snake pendant. Made of silver with carnelian stones for eyes, it hung from a red leather cord. LaShaun transferred her placid gaze from a spot on the drab light green wall to the skinny blonde-haired clerk. The woman jumped and blinked rapidly when their gazes met.

“How do you know my name,” Darlene said, her voice squeaky and eyes wide.

“Name tag.” LaShaun pointed to the brass plate fixed to a wooden bar on her desk.

Darlene blinked rapidly some more, then let out a high-pitched giggle. “Well duh, Darlene. Nobody needs a crystal ball to know that.”

Another woman marched up. She looked ten years older than Darlene. Her too perfect red hair convinced LaShaun that it came from a bottle. Freckles covered her pale face. She gave LaShaun a brief sideways look then frowned at Darlene. “What are you doing?”

“Just being polite,” Darlene replied. “LaShaun, this is Terry Ramirez. She works over in robbery and-”

“Stop chit chatting and get back to work.” Terry jerked a thumb toward a stack of folders.

“Right,” Darlene said obediently, but frowned when Terry turned her back. She stood, gathered folders, and gave LaShaun a wink before she strolled off.

Turning toward the voice, LaShaun found herself face to face with Savannah St. Julien Honoré, her childhood nemesis growing up in Beau Chene. Savannah’s honey brown skin blended well with the golden highlights in her hair. She stood next to a sullen young woman. Terry lingered nearby and thumbed through papers on Darlene’s desk.

“Hello, Savannah.” LaShaun looked at her.

Her long hair pulled back into ponytail, Savannah wore navy blue slacks, a crisp light blue shirt and carried a leather case. “You’re representing a client? I thought you retired from the law to run the family business.”

“Okay.” Nyla strode off with one last scornful look around to let law enforcement know she didn’t think much of them.

“Not me. This is just a misunderstanding,” LaShaun said.

“Sure it is,” Savannah replied in a dry tone. “Sorry to hear about your grandmother being so sick.”

LaShaun gazed at Savannah. She really meant it. Of course she did. Savannah had always been the “good girl”, the polar opposite of what the town folk thought of LaShaun.

“Yeah, everybody knows. So how long will you be in town?”

“Don’t worry. We’ll have time to do lunch and catch up on old times.” LaShaun smiled.

“Definitely. Wait by the phone for that call.” Savannah gave her a tight smile and walked off.

LaShaun waved to Savannah when she looked back once more before exiting the station. Terry stared at LaShaun across the room with a stony expression. Moments later Deputy Broussard
strode toward her. She suspected he meant to shake her up with that harsh façade. Obviously Deputy Broussard
had not done his research on her very well.

The tall husky deputy stood about three feet away. One hand was on the dark brown gun belt around his waist. He gave a curt gesture like a traffic cop directing cars. LaShaun did not miss the way Terry stood straighter and brushed two fingers through her hair when he got close to them.
“Ms. Rousselle, this way please.”

LaShaun walked close enough to brush her arm against his.
“
I most certainly will, Deputy Broussard. I’m going to cooperate fully.”

Terry sucked in air like an angry vacuum cleaner. “Call if you need me to pull any reports or records.”

“Thanks. I have everything I need already,” Deputy Broussard said.

He gestured for LaShaun to walk ahead of him.

“Nice meeting you.” LaShaun smiled at Terry. She put a little extra sway to her jean- covered hips as she walked ahead of the deputy. A look back at the woman confirmed her suspicion. Terry would have gladly scratched out LaShaun’s eyes.

“All right, Deputy Broussard. My, my. All this attention because my rental SUV has a broken taillight.

Must have happened on the road here. Nice to know Vermillion
Parish is protected against jagged plastic.” LaShaun knew getting smart might cause her more trouble. Still she liked seeing Broussard
’
s jaw muscle cramp up when she refused to cower. She had inherited a smart mouth from her late mother, Francine. Something Monmon Odette chastised her for on numerous occasions.