Read A Flash of Green Online

A Flash of Green 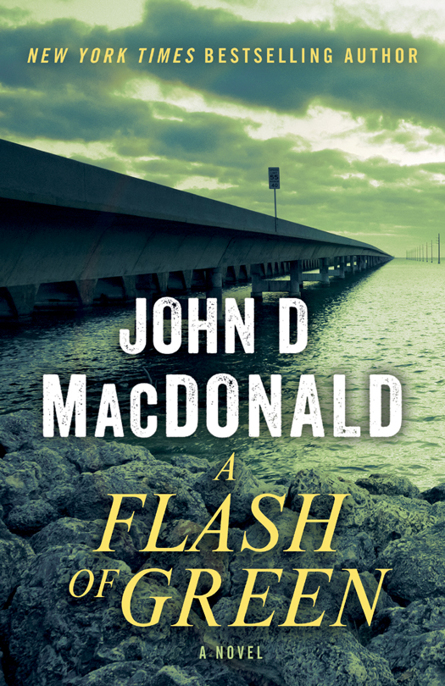 “MacDonald’s books are narcotic and, once hooked, a reader can’t kick the habit until the supply runs out.”

“John D. MacDonald remains one of my idols.”

“The Dickens of mid-century America—popular, prolific and … conscience-ridden about his environment.… A thoroughly American author.”

“It will be for his crisply written, smoothly plotted mysteries that MacDonald will be remembered.”

“MacDonald had the marvelous ability to create attention-getting characters who doubled as social critics. In MacDonald novels, it is the rule rather than the exception to find, in the midst of violence and mayhem, a sentence, a paragraph, or several pages of rumination on love, morality, religion, architecture, politics, business, the general state of the world or of Florida.”

A Flash of Green
is a work of fiction. Names, characters, places, and incidents are products of the author’s imagination or are used fictitiously. Any resemblance to actual events, locales, or persons, living or dead, is entirely coincidental.

Originally published in paperback in the United States by Fawcett, an imprint of The Random House Publishing Group, a division of Random House LLC, in 1962.

WHEN I WAS IN COLLEGE
, I had a friend, Harry Recard, who was smart, funny, and a demon card player. Harry was a successful history major, while I passed more time playing pinochle than I spent in class. For the three and a half years that I required to graduate, I heard Harry rave about this writer named John D. MacDonald, “John D” to his most ardent readers. Of the two of us, Harry was the better card player and just generally the cooler one. Consequently, I was protective of my position, as an English major, to be the better judge of literature, don’t you know. I remained reluctant to give John D a look.

Having read mostly science fiction, I found many of my professors’ assigned authors markedly less exciting than Robert Heinlein and Theodore Sturgeon, but I was determined to read the right thing. For every Flannery O’Connor whose work I could race through with delight, there were three like Virginia Woolf, who made me want to throw their books off a high cliff and leap after them. Nevertheless, I continued to shun Harry’s beloved John D.

Five or six years after college, I was a full-time writer with numerous credits in science fiction, struggling to move into suspense and mainstream work. I was making progress but not fast enough to suit me. By now I knew that John D was widely admired, and I finally sat down with one of his books. In the next thirty days, I read thirty-four of them. The singular voice and style of the man overwhelmed me, and the next novel I wrote was such an embarrassingly slavish imitation of a MacDonald tale that I had to throw away the manuscript.

I apologized to Harry for doubting him. He was so pleased to hear me proclaiming the joys of John D that he only said “I told you so” on, oh, twenty or thirty occasions.

Over the years, I have read every novel by John D at least three times, some of them twice that often. His ability to evoke a time and place—mostly Florida but also the industrial Midwest, Las Vegas, and elsewhere—was wonderful, and he could get inside an occupation to give you the details and the feel of it like few other writers I’ve ever read. His pacing was superb, the flow of his prose irresistible, and his suspense watch-spring tight.

Of all his manifest strengths as a writer, however, I am most in awe of his ability to create characters who are as real as anyone I’ve met in life. John D sometimes paused in the headlong rush of his story to spin out pages of background on a character. At first when this happened, I grumbled about getting on with the story. But I soon discovered that he could make the character so fascinating that when the story began to race forward again, I wanted it to slow down so I could learn more about this person who so intrigued and/or delighted me. There have been many good suspense novelists in recent decades, but in my experience, none has produced characters with as much humanity and truth as those in MacDonald’s work.

Like most who have found this author, I am an admirer of his Travis McGee series, which features a first-person narrator as good as any in the history of suspense fiction and better than most. But I love the standalone novels even more.
Cry Hard, Cry Fast. Where Is Janice Gantry? The Last One Left. A Key to the Suite. The Drowner. The Damned. A Bullet for Cinderella. The Only Girl in the Game. The Crossroads. All These Condemned
. Those are not my only favorites, just a few of them, and many deal with interesting businesses and occupations. Mr. MacDonald’s work gives the reader deep and abiding pleasure for many reasons, not the least of which is that it portrays the contemporary life of his day with as much grace and fidelity as any writer of the period, and thus it also provides compelling social history.

In 1985, when my publisher, Putnam, wanted to send advance proof copies of
Strangers
to Mr. MacDonald among others, I literally grew shaky at the thought of him reading it. I suggested that they shouldn’t send it to him, that, as famous and prolific as he was, the proof would be an imposition on him; in truth, I feared that he would find the novel unsatisfying. Putnam sent it to him anyway, and he gave us an enthusiastic endorsement. In addition, he wrote to me separately, in an avuncular tone, kindly advising me how to avoid some of the pitfalls of the publishing business, and he wrote to my publisher asking her to please carefully consider the packaging of the book and not condemn it to the horror genre. She more or less condemned it to the genre anyway, but I took his advice to heart.

In my experience, John D. MacDonald, the man, was as kind and thoughtful as his fiction would lead you to believe that he must be. That a writer’s work accurately reflects his soul is a rarer thing than you might imagine, but in his case, the reflection is clear and true. For that reason, it has been a special honor, in fact a grace, to be asked to write this introduction.

Reader, prepare to be enchanted by the books of John D. MacDonald. And Harry, I am not as much of an idiot as I was in years gone by—though I know you won’t let me get away with claiming not to be to any degree an idiot anymore.

WHEN SHE HEARD THE RATTLE
of the old tin wheelbarrow, Kat Hubble knew it was after four. On Tuesdays, after he had finished up at the Lessers’, and on Fridays, when he was through at the Cable home, Barnett Mayberry would do one extra hour of yard work at her house before getting into his stuttering old car and driving back home to Pigeon Town, the Negro community on the far side of Palm City.

Before Van had been killed, Barnett had come one full day a week, and though now it added up to only one quarter of the time, he seemed to keep the place looking as neat as ever, though of course she had begun no new landscape projects in this past year, and she did more of the work herself.

The arrangement with Barnett had just seemed to happen. Beginning the week after the funeral, he had stopped by to take care of things which obviously needed attention, such as clipping the side hedge of Australian pine, and she had given him a dollar for each after-work hour. In some mysterious way it had become a
routine. It so exactly fitted her diminished purse and her needs that she could not help suspecting it was not entirely satisfactory to Barnett, that he had entrapped himself through some murky idea of loyalty and pride in past projects. Yet when she had at last taxed him with it, he had looked rigidly beyond her and shuffled his feet and said, “I got a place for them dollahs, Miz Hubble. It working out good for me.”

She had always felt slightly indignant that Van should be able to get along so effortlessly with Barnett and the other Negroes who had worked for them from time to time. But, as he had reminded her, there was quite an environmental gap between a girlhood in Plattsburg, New York, and a boyhood in Orlando, Florida.

She would hear Van out in the yard, laughing with Barnett, and once when he came in she said, “Hee-hee-hee. Yuk, yuk, yuk. I’ll bet he doesn’t laugh that way when he’s with his own people.”

Van had stared at her in honest surprise. “Of
course
he doesn’t, cutie. And he doesn’t talk the same way either. He uncle-toms me a little, but without losing his dignity, and I pull the mahster a little on him, but not too much. It’s a protocol thing, Kat, and it makes us both feel at ease because we both know so very damn well the limits of the relationship in which we have to operate. He’s just as respected a citizen in his neighborhood as I am in mine. If I try to push him beyond the limits he sets, he’ll just get slower and stupider until I leave him alone. And if he tries to take advantage of me, he expects to get chewed.”

“But when I go out to tell him what I’d like him to do, he stares into space and acts terrified.”

“He probably is. He knows you don’t know the rules. He knows you’re a Wellesley liberal. You might ask him what he thinks of Faubus. And the next time you listen to us have an attack
of the jollies, dear heart, you might note that I probably laugh differently and speak differently than when I’m with
my
own people. He’s probably as wary with Burt Lesser as he is with you, and as comfortable with Martin Cable as he is with me.”

Since Van’s death, Barnett had given her the curious impression he had been trying to put her at ease. He would make some empty remark and then laugh. Five years ago she had bought a little rubber tree in a pot for twenty-five cents. Now it was nearly twenty feet tall and continually covered with the upright bloody spears of new leaf growth. “Heee!” Barnett would say. “Little ol’ two-bits tree.” That was their signal for the vague social laughter. But once it had brought too clear a memory of Vance, and one laugh had become a sob and she had fled into the house.