Read A Matter of Trust Online 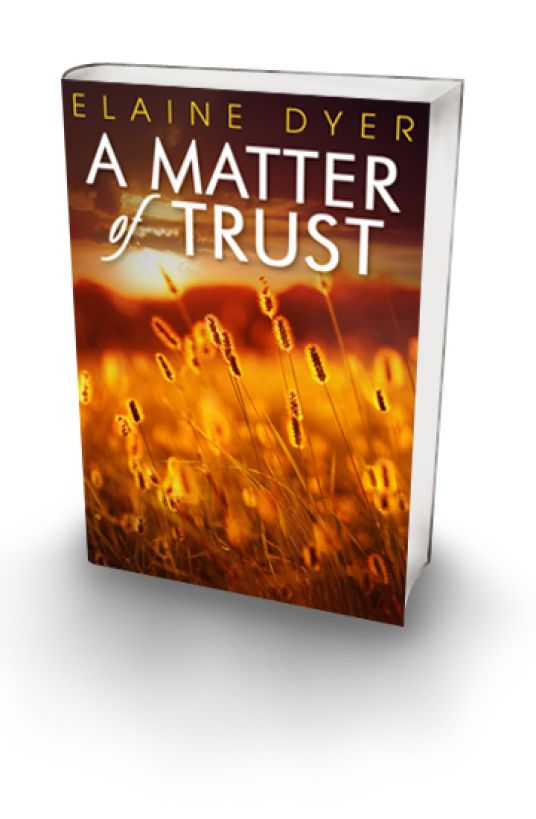 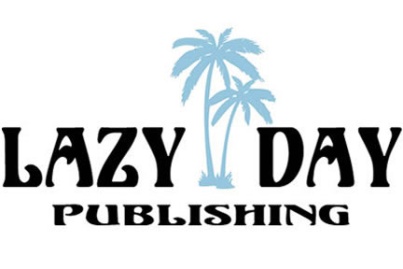 This book is a work of fiction. Any
resemblance to persons, living or dead, or places, any events or
locales is purely coincidental. The names, characters, places and
incidents are products of the writer’s imagination and are not to
be construed as real.

No part of this book may be used or
reproduced in any manner whatsoever without the express written
permission from the publisher LazyDay, with the exception of quotes
used in reviews and critical articles.

Dedicated to the Lunch
Bunch:

And especially, Trish the
dish (the real one)

A MATTER OF
TRUST

“
Sweetie, are you sure you
can’t come with us? You’ve been burning the candle at both ends for
so long now. You need to take a break sometime.” Trish’s mother’s
worried gaze swept over her with pleading eyes.

Trish hugged her mother then said, “I
know, Mom, but I just can’t get away right now. The Lit Center is
only now starting to take off, and the girls are depending on me to
make a profit.”

“
The girls are on my side,
Trish. They both wanted you to take a break and offered to tag in
for you for a couple of weeks. You’re working yourself into the
ground, baby. If you don’t want to go for the whole trip, just come
for the cruise.”

“
Another time, Mom. Maybe
next year. The fact that you’re taking the kids will be a nice
little break in itself. I love them to death, but … “

“
You don’t have to explain
to me, honey. Your dad and I always tried to take a quick trip by
ourselves at least once a year just to be a couple … oh gosh,
that’s terribly insensitive of me, Trish. I’m so sorry.” Trish’s
mother covered her mouth with both hands as she shook her
head.

“
No, Mom, that’s okay. I’m
not sensitive like that. Please don’t feel bad. It’s been over two
years since Pete’s been gone. You better get going, or you’re going
to be driving all night. Trevor, Lexie, give Mommy one more big hug
and slobby kiss before you leave. I’ll miss you bunches. Be good
and mind Gram.” Trish pulled each of her children in for one more
hug and kissed them both.

“
We will, Mom. Love you.
Come on, Lex.” Big brother took his little sister’s arm and yelled
out that he got to choose the first movie they watched.

Trish watched as her seven year old
son and three year old daughter climbed into her parents’ van. She
would miss them terribly, but it would be nice to be Trish instead
of Mommy for a short while. She waved goodbye to her parents and
her children and headed back inside and closed the door.

What a novelty, and what an unusual
occurrence. Trish didn’t turn on the TV or the radio or any other
noise making machine. She simply enjoyed the silence for several
minutes, before she broke out her work for the day. As much as she
liked the idea, she couldn’t afford to take even a day off, much
less a whole month for vacation. Eva and Callie were counting on
her to make the Lit Center a success, and she planned to do exactly
that. So far, so good. They weren’t making much of a profit yet,
but they were meeting expenses, and for a less than one year old
business, that spoke volumes, if she did say so herself.

Trish had signed up several kids for
tutoring in the last couple of weeks, and she’d done several other
reading diagnostics as well. She needed to do the write ups on
those latest tests and prescribe a regimen to address the strengths
and weaknesses in reading that would improve the kids’ performance
in school. Most of her clients were kids who’d attended her summer
camps, which were a great success. Lately, though, she’d been
getting kids in whose parents had heard of the miracles which had
been worked for kids behind in school due to difficulties in
reading. Business increased steadily.

Trish got busy with the half dozen
diagnostic reports and intervention plans, and before she knew it,
it was after midnight. Although she knew she had to get at least a
few hours of sleep before she started another work week, she still
hated to stop when she still had so much work to do. Sighing, she
packed up her materials and reports and set them by her purse and
went to bed.

She fell into an exhausted sleep for a
good couple of hours, but awoke abruptly due to the same nightmare
she’d been having regularly. Pete was in bed with her, and he was
nuzzling her neck, trying to get her in the mood. She opened her
eyes to look at him and smile, only to find him covered in blood.
His blood. She sat up, short of breath, and turned on the light. At
this point, she usually got up and checked on the kids, gaining
some peace seeing them sleeping soundly, but since there were no
kids in the house to check on, she turned the light off again and
lay back down. Sleep eluded her for hours before she fell back
asleep. When the alarm rang, she groaned, so tempted to hit the
snooze button, but instead rolled out of bed and hit the
shower.

An hour later, coffee mug in hand, she
drove to work. No longer a luxury, coffee now qualified as a
necessity unless she planned on falling asleep at her
desk.

As she headed to the office, her mind
strayed to the past and how she’d ended up here. She’d lost her
home, her cars, had to sell all of her things and declare
bankruptcy, and she hadn’t been directly responsible for any of it.
Bitterness and betrayal spread through her like a cancer, and she
struggled to push it back. No sense wasting any more time hashing
through all that again. Water under the bridge. She’d survived, and
she would continue to do just that, despite her ruined credit and
having to move in with her parents, which came with its own
distinct humiliation, despite their unwavering financial and moral
support. Even they didn’t know the whole story. No one did, and she
had every intention of keeping it that way.

Trish pulled into the Lit Center
parking lot and went inside. Always the first on the scene, she
habitually got to work at least an hour early. Rather than sleep in
later with the kids gone, she got up even earlier to get more done
without having to get Trevor ready for school. No rest for the
weary. Or was that the wicked? No rest, either way.

Diana Taylor, her receptionist and
secretary walked into her office to say good morning sometime
later. She looked edgy, and Trish stopped her before she could
leave.

“
Hey, Di, is everything
okay?” Trish smiled at the other woman. “You look a little
stressed.”

“
You can say that again.
You’d think I’d be raring to go since I have the house to myself,
but I didn’t sleep well. I guess the quiet got to me.”

Diana smiled sadly. “No such thing as
too much quiet. You’ve just forgotten what it’s like. You should
enjoy the alone time, Trish. God knows when you’ll have it
again.”

“
Are you enjoying your
alone time, Di? It’s been almost a year now since you left your
husband. How are you adjusting?” Trish looked at her employee and
friend and thought again how she really did look tired and
edgy.

Diana looked at her then away. “I’m
doing okay. It takes awhile to get used to being alone, and it’s
hard financially, but it’s so much better than walking on eggshells
and feeling scared to death my husband would go into another
rampage and land me in the hospital again. I’m going to counseling
and that’s helping, but I guess it just takes time. Eva’s Saturday
classes have been a real boost to my self-confidence. It’s so sweet
of her and Callie to volunteer their time at the battered women’s
shelter. Between the three of you, I feel much more hopeful about
the future.”

“
Yeah, Eva and Callie are
great, aren’t they? They sure helped me get back on my feet again,
although I hadn’t been in the kind of abusive marriage you were in.
I can only imagine how terrible it was for you, Diana. I’m so glad
you were able to get out.”

“
I have you and this job
to thank for that, Trish. I don’t know what I would have done
without it. I could never have gotten my own place, even with a
roommate. Thanks again.”

“
If you thank me one more
time, I’ll fire you! Enough! Let me know if anyone new walks in,
okay?”

Trish was hard at work on her projects
when she heard someone walk into the center. She listened to a
muted conversation in the lobby and smiled once she heard a
familiar giggle headed her way.

Her two best friends and business
partners, Callie and Eva, walked into the office and took the two
chairs in front of her desk. “Well, good morning, ladies. What
brings the two of you in this morning? Making sure I’m not slacking
off?”

“
Like that’s likely to
happen any time soon, despite our best efforts. Today, however, we
are not going to take no for an answer.” Callie took that stubborn
stance that always signaled that whoever she talked to didn’t have
a chance of overriding her.

“
Regarding what exactly,
Callie?” Trish looked at her cautiously.

“
You, me, and Eva are
going out on a girls’ night this Saturday. And before you even
think about turning us down, you might as well know that my mind is
made up. You’re officially childless for awhile, and you need to
let your hair down for once.”

Trish chewed on the end of her pen. “I
don’t know, Callie, I’m working on some expansion plans for the Lit
Center, and I’d planned on ironing out some details this weekend.
How about a rain check?”

“
Did you not hear her,
Trish? Callie has made up her mind, and you know how she is when
that happens. There’s no stopping her. The work will still be
there, and you can’t use the kids as an excuse. No more argument.
We’re going.” Eva stood next to Callie, her look daring her to try
to resist the invitation.

Trish looked from one woman to the
other and finally smiled in defeat. “Alright, alright, I know when
I’m outnumbered. I’ll go. Where are we going anyway?”

“
First to Carlos and
Mickey’s for happy hour and Margarita’s. They also have live
Mariachis. Then, we’ll see. Maybe we’ll go out to Sunland Park
Casino.”

Edith Wharton - Novel 14 by A Son at the Front (v2.1)
Embrace the Mystery [03] Blood Rose Series by Caris Roane
To Seduce A Siren by Cousins, Jane
Hard Going by Cynthia Harrod-Eagles
Titus Crow [1] The Burrowers Beneath by Brian Lumley
Monroe, Marla - Their Border Lands Gift [Men of the Border Lands 5] (Siren Publishing Ménage Everlasting) by Marla Monroe
Wishes in the Wind by Andrea Kane
The Omicron Legion by Jon Land
Dead of Winter by Kresley Cole
GENESIS (GODS CHAIN) by Nikolaus Baker
Our partner