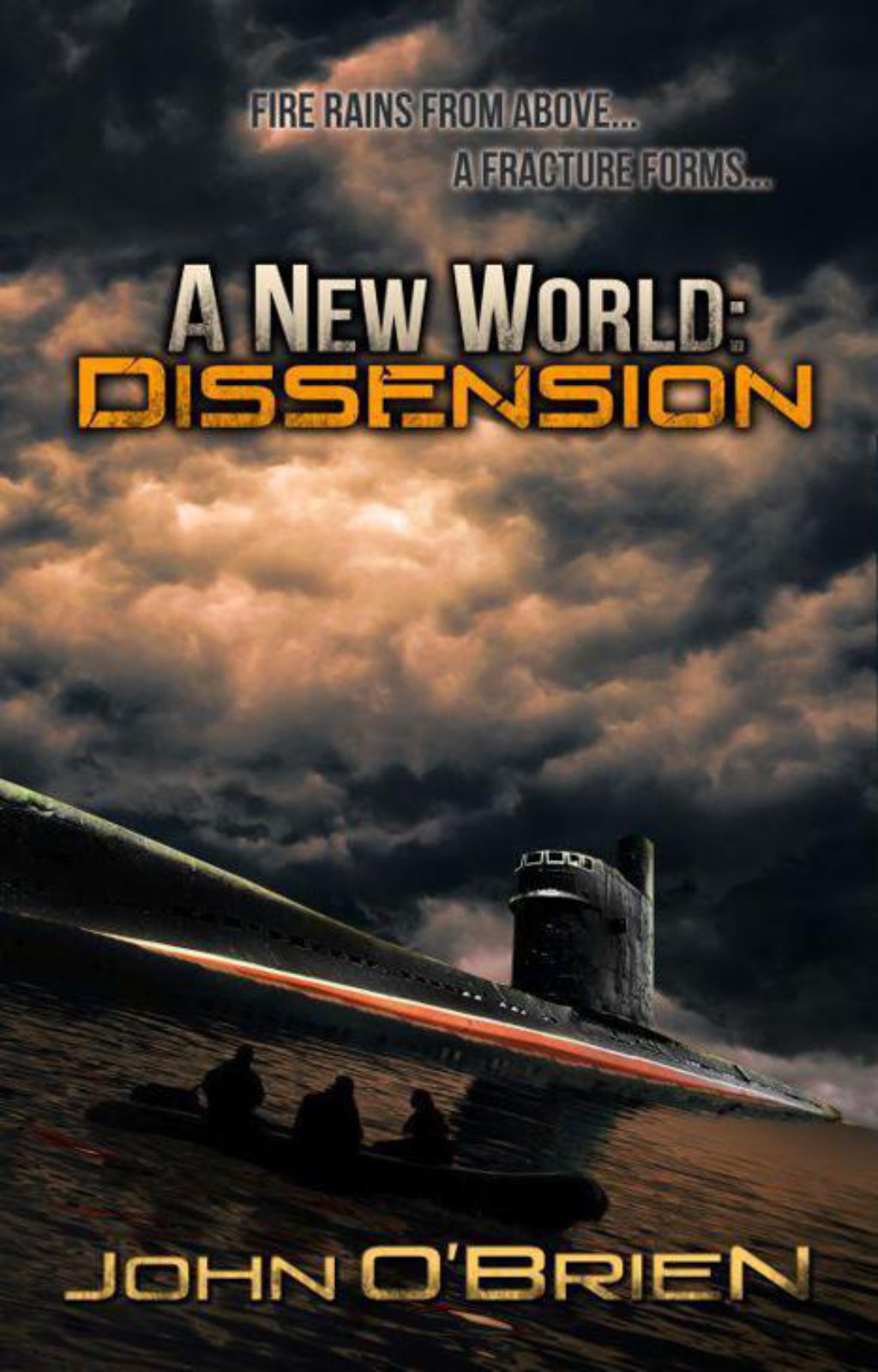 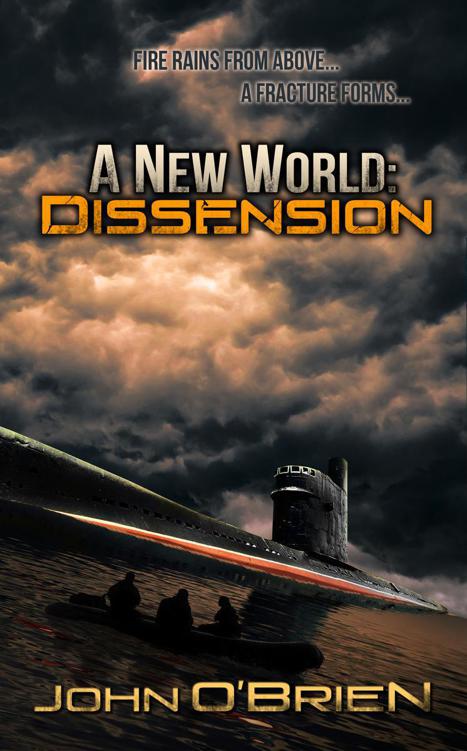 A New World:
Dissension
A Novel by John O’Brien

Published by John O’Brien at Smashwords

All rights reserved. No part of this book may be reproduced in any form, except for the inclusion of brief quotations in review, without permission in writing from the author.

This eBook is licensed for your personal enjoyment only. This eBook may not be re-sold or given away to other people. If you would like to share this book with another person, please purchase an additional copy for each recipient. If you’re reading this book and did not purchase it, or it was not purchased for your use only, then please return to Smashwords.com and purchase your own copy. Thank you for respecting the hard work of this author.

This book is dedicated to all of my fellow authors and friends. You write your stories and set yourself out there. Your stories allow others to lose themselves for a while providing a pleasant escape into a world you created. Thank you for the hours of entertainment.

The New World series is a fictional work. While some of the locations in the series describe actual locations, this is intended only to lend an authentic theme. Any resemblance to actual events or persons, living or dead, is purely coincidental.

As usual with all of the books, I would first like to thank my mother, June O’Brien for the many hours she has spent editing. This is besides finishing the first book of her series, ‘The Blue Child Series.’ I encourage you to take a look at it, ‘On the Mountain.’ It is sincerely a great read for fans of science fiction and fantasy.

I want to give a very warm thanks to the review group. Your insights and catching the things I missed, and there were a number of them, was a huge help. Thank you for all of your wonderful ideas and chats. Alex Ranka, Alexandra Snyder, Andrew Johnson, Andy Bilton, Craig Vitter, Dan Shaw, Frank Knoles, James Jackson, Jessica Woodman, Joe Mahoney, Johnny Clark, Larry Sullivan, Laurel McMeredith Andreasen, Rachel Estok, Rick Higgins, Russell Hicks, Tiffany Clark, Vanessa McCutcheon, and Wendy Weidman. Thank you!

A big thank you to Matthew Riggenbach for putting up with me through the cover art design. I’m a pain and fully realize that. Thank you for weaving your magic. The result is truly incredible and I thank you for your time and effort.

I am truly appreciative of all of the messages and mentions. I enjoy each and every one of them and would like to thank you all for writing. I enjoy the chats and messages we pass back and forth and it makes my day to receive them. I hope this book is as enjoyable to you as the previous ones. This is a cliché but so true, I write this story for the readers. If it wasn’t for you, this story wouldn’t be what it is.

If you do happen to enjoy the story, feel free to leave a review. Reviews are important for two reasons. One is that’s how the books get up in the listing which of course means more sales. But more importantly, it lets me look at what everyone thinks of the story. Only through looking at the reviews and messages can I become a better writer.

Well, here we are on the sixth book of what was originally supposed to be a three book series at best. And I say “we” because it is your story just as much as mine. It’s your reading it and your encouraging words that keep the story going. The story grows with each part told and I am as surprised as you are when parts of the story line unfold. This book is a little outside of how the others unfold as there are a lot of parts that come together, and others that emerge. It will be interesting to see how Jack and Michael react in the future.

There are some caveats I must throw out here. One, and not to throw a spoiler out, is that the night runners do converse in this book. Please keep in mind that I have used words outside of their vocabulary to make their dialogue and thoughts understandable. The night runners think primarily along the lines of picture images which represent various patterns, ideas, or situations. The vocabulary therefore is along these lines. If I were to write it out exactly as they say/think it, it wouldn’t be very readable. Please excuse a little literary license on my part.

Speaking of literary license, I know that the sub on the cover is not that of an LA class attack submarine. I used the one on the cover for dramatic effect and I hope you will excuse me for that. Another aspect I have to mention is that religion is brought up within the group of survivors. This will be an inevitable conversation when a measure of security is obtained. The dialogue within regarding this is not meant one way or the other but merely a thought pattern within the group. I ask for your indulgence with this as no harm is meant.

I have to give my thanks to you, the reader, once again. The letters, messages, and kind reviews genuinely make my day. Thank you for them. If you happen to enjoy the story, please drop back by and leave a review.

So, enough spoilers. Let’s get on with the story, shall we?

A Ripple on the Surface

A Meeting of Minds

Observations in the Dark

Connect With Me Online

She ‘hears’ another message. It’s one of danger from fire above. The message conveys the danger of the sound she faintly hears.
Hide. And then come,
the ending message says. She turns in the direction of the one she senses. She can only feel him from this distance because of his strength. She begins to run through the night in his direction. She will come.

The chilled night air blows against her face as she jogs through the darkened streets. Her pack follows behind, the sound of their many feet echoing off the silent buildings. She still feels caution at bringing her pack to join with others but the call is persistent. The faint rumbling from the night sky becomes louder as she heads north towards the strong one she senses. Periodic flashes of light materialize from the sky in the distance. The horizon lights up a second later followed by a thunderous roar. She feels the earth beneath her feet shake with each explosion. She doesn’t know what is causing the light and roars from above but carries the image sent by the other one telling of the danger and the demise of packs. Whatever is in the sky is dangerous and to be avoided at all costs.

She and her pack continue through the streets. Gazing up into the night with each explosion, she senses her pack’s apprehension with each flash of light and roar. If the sounds draw closer, she will scatter them into the neighboring buildings as per the images she “heard” earlier. Smells of food rise from time to time, coming from side streets as they pass but she only hesitates for a moment and then pushes on. Her goal to reach the other one stays strong with her. She senses the other pack leaders who joined her earlier hesitate with each fresh scent and they query her. “Push on” she sends back. They hesitate a moment longer and pick up their pace to catch her.

She rounds a corner and comes to a stop. A large, domed building rises in front of her. This is where she senses the other one along with many other packs. Her caution deepens as she inspects the structure and outlying area. She’s wary about joining a larger pack as she doesn’t know what position that would put her in. She knows she will be taken care of as she is carrying a young one but she enjoys leading her pack and is secure in the knowledge that they can support themselves. If she joins another one, it will be more difficult to hunt and find food for so many. On the other hand, she knows with so many, they can track and trap food easier but they will have to journey far to find enough for all of them.

The others around her sense her apprehension and mill about scanning the heavens as the droning nears from time to time. She shakes her head dispelling these thoughts. She answered the call so she will continue on knowing she can take her pack and leave at any time. A thunderous explosion fills the night and shakes the ground as if signaling that it’s time to get inside. Sending a signal that she is arriving with her pack, she steps forward and trots to an entrance door.

She enters the building as another booming explosion from nearby vibrates the ground. Proceeding through another door, she enters the interior. The room is vast and will easily hold both packs with room for others. Pack members mill or stand still on the steps and seats surrounding a large wooden floor. With each blast outside, they stop and gaze nervously at the high ceiling. She strides across the polished wood floor which feels cool and slick beneath her feet toward the one she sensed. He is squatting in the middle of the floor with others around him staring at the ceiling like the others. His eyes meet hers as she draws near. Her hand drops and subconsciously rubs her stomach as if consoling the young one who resides there. With her pack fanned out behind her, she comes to a stop before him.

His introduction with a name confuses her. She has never heard of a “name” before and his naming himself in such a manner ripples through her mind. It jars something loose in her. The remembrance of another language comes to her, one that is sound rather than images. Then, as if a dam breaking, a torrent of images and thoughts flood her brain. She recoils and feels her knees grow weak as dizziness descends. Thoughts race through in an unrelenting rush. After several moments, they steady and the dizzy feeling ebbs. She knows she can speak and understand the language of sounds. The name Michael makes sense and she knows it is a form of identification. Images swirl haphazardly, memories flicker.

Captive Secrets by Fern Michaels
Rachel by Jill Smith
The Warrior (The Rebellion) by Jordan Magera
Extinction by West, Kyle
Frost by Kate Avery Ellison
Supernatural: One Year Gone by Dessertine, Rebecca
Staring Into the Eyes of Chance by Kay Dee Royal
Being With the Brothers Next Door by Jenika Snow
Wink Poppy Midnight by April Genevieve Tucholke
Summer Season by Julia Williams
Our partner