Read After a Fashion Online 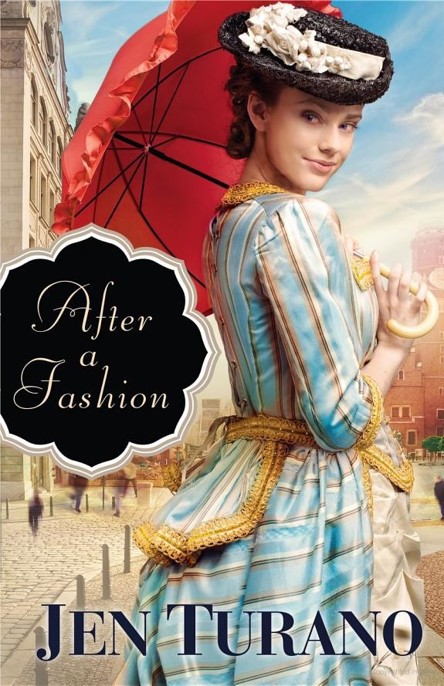 M
iss Peabody, I do so hate to interrupt your work, but an urgent message has just arrived that requires immediate attention. Would you join me for a moment so we may speak privately?”

Setting aside the feather she’d been about to attach to a delightful monstrosity of a hat, Harriet Peabody rose to her feet and hurried after her employer, Mrs. Fienman, who’d disappeared through the office door. Realizing that what Mrs. Fienman needed to disclose was unlikely to be of a pleasant nature, Harriet stepped into the office and pulled the door firmly shut. After dodging numerous hats lying about the floor, she stopped in front of the desk and resisted the urge to fidget when Mrs. Fienman simply stared at her.

“Would you like a cup of tea, dear?” Mrs. Fienman finally asked, causing sweat to immediately bead Harriet’s forehead.

Mrs. Fienman had never offered her tea, not once in all the time she’d worked for the lady.

“Thank you, but I’m not actually thirsty,” she managed to get out of a mouth that had turned remarkably dry.

“I insist.” Mrs. Fienman nodded toward a tea set.

“I’d love some tea.” Harriet moved to the teapot and poured out a cup, wincing when droplets of tea splashed onto the table, a result no doubt of hands that had taken to trembling. Brushing the droplets aside with a corner of her sleeve, she picked up the cup, turned, and noticed the odd circumstance of Mrs. Fienman thumbing through a copy of the latest fashion magazine. She cleared her throat. “The urgent message, Mrs. Fienman?”

“Ah, yes, quite right.” Mrs. Fienman stopped thumbing and nodded to a chair stacked high with hats. “Have a seat.”

Harriet edged gingerly down on the very front of the chair, desperately hoping that no hats were being squashed by the fashionable bustle attached to her backside. It truly was unfortunate she had not yet perfected the collapsible bustle she’d been attempting to create. Such a bustle would have come in remarkably handy at that particular moment.

“Now then,” Mrs. Fienman began, “I need you to make a delivery for me.”

Pausing with the teacup halfway to her lips, Harriet frowned. “A delivery?”

“Indeed, and I must state most emphatically that it’s a very important delivery, one that I wouldn’t trust to just anyone.”

Setting the cup aside, Harriet rose to her feet, taking a brief second to collect her thoughts before she dared speak. “I do hope you won’t take offense at this, Mrs. Fienman, but I wouldn’t be comfortable delivering anything of a . . . shall we say, shady nature.”

Mrs. Fienman’s jowls began to quiver, she turned an interesting shade of purple, and then, to Harriet’s amazement, the lady gave a loud hoot of laughter. Mrs. Fienman chortled for a full minute before she finally gave a last hiccup of amusement and
motioned Harriet back to the chair. “How amusing to learn you find me capable of ‘shady’ dealings, Miss Peabody, but I assure you, nothing could be further from the truth.” She tapped a finger against one of her many chins. “Although, I have often thought that if I did possess a mysterious attitude—which again, I don’t—it might be helpful for drumming up business.”

Unable to summon up a suitable response to that peculiar remark, Harriet moved back to the chair, sat down, and immediately sucked in a sharp breath when she heard an ominous
crunch
. Knowing without a doubt she was sitting on top of what had to be a ruined hat, she couldn’t help wonder how much Mrs. Fienman was going to insist she hand over to compensate for the damage done. Harriet did have a few extra dollars at her disposal, but they had been painstakingly saved with the intent of splurging on a lovely birthday dinner—not a crushed hat.

She didn’t really
need
a savory steak to celebrate the day of her birth. No, enjoying the company of her friends would suffice, but . . . a steak would have added a nice touch of extravagance to the evening, and she hadn’t savored a tasty piece of beef for months.

“. . . so I need you to take the carriage and see to it that Mr. Addleshaw’s fiancée is satisfied with the hats we’ve created for her.”

All thoughts of tasty beef evaporated in a split second. “Am I to understand the urgent situation you’re facing is due to your need for a delivery of hats?”

“Too right it is, and not just any hats, but hats specifically created for Miss Birmingham. She has only recently arrived in town, and is newly engaged to Mr. Oliver Addleshaw, one of the wealthiest gentlemen in America.”

Mrs. Fienman sent Harriet a wink. “Word about the city has it he’s made an obscene fortune through some manner of finance. It’s my dearest hope to grab a piece of that fortune through
return business from the gentleman’s fiancée.” She picked up a letter lying on her desk and began fanning her face with it. “This note from Miss Birmingham, while being somewhat hysterical in nature, states that the lady is concerned the hats she ordered might not complement some of the pieces of a wardrobe she had delivered to her this morning.”

Harriet’s mouth dropped open. In her world,
urgent
meant someone had died, the rent was overdue, or dinner could not be served due to lack of funds. It never meant one was anxious for a delivery of hats.

“I’ve sent Timothy off to get the carriage,” Mrs. Fienman continued briskly, “and he’ll be back directly. All you need to do is help Miss Birmingham sort through the hats, and soothe any ruffled feathers she might have if some of the styles don’t exactly complement her gowns.”

“I do beg your pardon, Mrs. Fienman, but I must inquire as to why you’re not personally seeing to this situation, considering it seems to be of a delicate nature.”

Mrs. Fienman’s expression turned a little shifty. “I thought it was past time we got you out of the back room and mingling with clients.”

“And you believe my ‘mingling’ should begin with the fiancée of one of the wealthiest gentlemen in America?”

“You, Miss Peabody, are made of stern stuff, which is why I’ve chosen you for this unpleasant . . . or rather,
delightful
task. I cannot send Gladys or Peggy because Miss Birmingham is possessed of a slightly tumultuous personality. She would have those two in tears within minutes. Why, I wouldn’t imagine you’d even cry if your dog died.”

“Well, no matter. I’m certain if you did own a dog and it tragically died, you wouldn’t shed a single tear, would you?”

Harriet forced a smile. “While I certainly appreciate your
confidence in me, I must remind you that, when you hired me, you specifically told me I was to keep to the back room and not mingle with our clients. Because of that, I am not being modest when I say I’m not exactly equipped to deal with a member of the quality.”

“My reasoning behind banishing you to the workroom was not because I ever doubted your ability to mingle with clients, Miss Peabody. It stemmed more from the fact that with your all-too-pretty face, unusual violet eyes, and luscious black hair, you’d cast our customers in the shade. However . . .” She released a dramatic breath. “Miss Birmingham is not one of our usual clients. She apparently took issue with my rather large figure, and has specifically requested her hats be delivered by a person possessed of a pleasant and slender appearance.” Mrs. Fienman waved a hand at Harriet. “Since you’re the only person available with those qualifications, you’ll have to make the delivery.”

Alarm began to ooze from Harriet’s every pore. While she was perfectly aware she possessed a slender figure, brought on by a distinct lack of food on a regular basis, she was fairly sure she’d detected a faint trace of glee in Mrs. Fienman’s voice. She had the sneaking suspicion the glee was a direct result of her employer hoping she would cast this Miss Birmingham in the shade, which certainly wasn’t going to help her deal with the lady. Before she could voice a protest, though, Mrs. Fienman leaned forward.

“I must admit I’ve been most curious about where you obtained such stellar good looks. Do you take after your mother or your father?”

“I never met my parents, Mrs. Fienman. My mother died giving birth to me, and my father, well . . .”

Mrs. Fienman’s eyes turned considering. “Do forgive me, Miss Peabody. I should know better than to ask questions of a personal nature, especially from a lady forced to make her own
way in the world. But, ancestry aside, you’re a lovely young lady, which is exactly what Miss Birmingham requested and exactly what I’m going to give her.” She wrinkled her nose. “A word of warning, though, before you depart—Miss Birmingham seems to make a habit of throwing things when she’s annoyed, so watch out for flying shoes.”

A droplet of perspiration trickled down Harriet’s back. “While this Miss Birmingham sounds like a
charming
sort, I honestly don’t believe I’m equipped with the social rules and expected manners to deal with her.”

“Your manners are perfectly adequate for this appointment. It’s not as if you should expect Miss Birmingham to invite you to sit down and enjoy a cup of tea with her.”