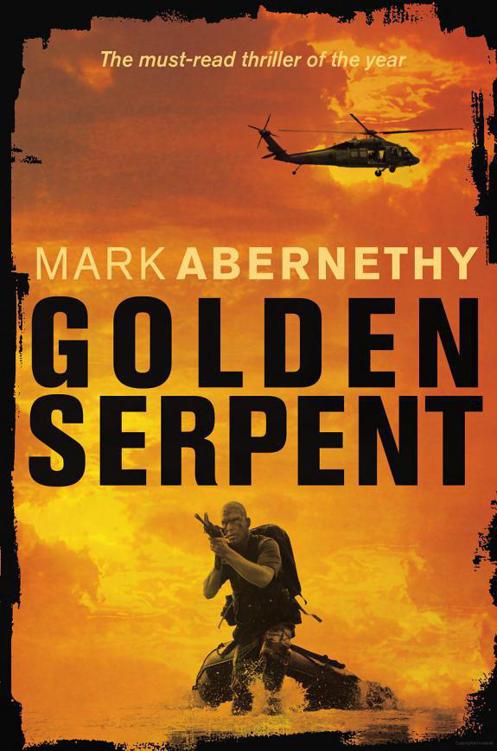 Tough Aussie spy Alan McQueen was once a star of the global intelligence community, renowned for having shot and killed Abu Sabaya, the world's most dangerous terrorist. But during a routine assignment in Indonesia, McQueen—aka Mac—discovers that Sabaya is not in fact dead. Instead he's teamed up with a rogue CIA veteran and is armed with a cache of stolen VX nerve agent he's threatening to deploy in a dramatic and deadly manner. Battling to stay one step ahead of Sabaya's hit-men, CIA double agents, and deep corruption within Australian intelligence, Mac must find the stolen VX before it's too late. His mission will take him on a chase through South-East Asia and test all of his courage and ingenuity.

**Mark Abernethy** is a speechwriter, journalist, and author. A former editor at _Australian Penthouse _magazine, he now writes for the_ Bulletin_ and the _Australian Financial Review_. He splits his time between Sydney and Dundalk, Ontario, Canada.

All rights reserved. No part of this book may be reproduced or transmitted in any form or by any means, electronic or mechanical, including photocopying, recording or by any information storage and retrieval system, without prior permission in writing from the publisher. The
Australian Copyright Act 1968

Arena Books, an imprint of

John Sawtell sopped gravy with a bread roll and kept one eye on the Cubs-Yankees game. Catering grunts cleared out bain-maries and wet-mopped the service area while the late eaters dragged it out in the demountable cafeteria, avoiding the thirty-six degree heat of early evening. The offi cers’ mess was almost empty except for two white guys in clean woodland-cam fatigues sitting three tables away.

Sawtell kept his eyes on the pitcher’s wind-up and away from the white guys - secondees dropped in from Langley with bullshit ranks. Sawtell’s US Army rank of captain was real. Yet here he was, spending whole days in meetings with these blue-eyed boys. He’d now heard enough about paradigm shifts and ‘the big picture’ to last him a lifetime.

Most of Sawtell’s Special Forces Green Berets were working-class men who needed solid leadership, not weasel words. Sawtell heard what his men had to say about some of the intelligence briefi ngs, especially from the guy they called ‘Pencil Neck’. He glanced across the mess and chuckled: everyone on an army base got a name, whether they liked it or not, and Pencil Neck’s was a good fi t.

Pencil Neck had lectured the men on the cultural sensitivities of the Muslim Filipinos. But Sawtell’s men were fresh from Kandahar, and they didn’t much care about which way to point a Muslim’s ass when you buried him.

Sawtell wiped his mouth with a paper napkin, took a draw of iced water, kept his eyes on the game.

The analogue clock above the chow line said it was 8.43 pm local. He threw the napkin on his plate and walked into the blistering evening heat.

The black carpet of the Sulu Sea sparkled through palm trees as Sawtell came off the concrete parade ground and entered the Command Centre.

The air-con was like a wall coming out of the windless humidity.

He ran a hand over his stubbly head, felt the damp of perspiration.

An MP looked up briefl y, but didn’t react. The real anti-terror work was done on the perimeter, from bullet-proof glass cages, pop-up bollards and a mean-as-hell MP detail trained at Fort Bragg.

He moved down the narrow hallway, the fl oor fl imsy beneath his size 13s. From this demountable, perched in an old schoolyard above the city of Zamboanga, the United States controlled the South-East Asian end of its War on Terror, codename: Operation Enduring Freedom.

For six months US military advisers had supported the Philippine Army Scouts and their Navy commandos, the SWAGs. It was a joint operation, so the locals clung to their own name, Balikatan 02-1, but the result was the same: hunt tangos, catch tangos, put tangos out of business.

Sawtell’s Alpha company had already been involved in two full-blown battles in their fi rst four months in Zamboanga. He’d lost two men. He didn’t feel like an adviser - he felt like a commander in a war zone.

As Sawtell made his way down the trailer towards his offi ce, a Signals corporal called Davis emerged from a room fi lled with computer screens.

‘Something just in, sir,’ said Davis, then turned back into his room. Sawtell followed, stooping his footballer’s frame to look at Davis’s screen.

Davis pointed to a secure memo from CINCPAC in Hawaii, dated two minutes earlier. The header on the memo was a bar of letters and numerals. They gave Sawtell the order to chase and catch or kill

‘Number One’ was code for the most dangerous man in South-East Asia, Abu Sabaya, the senior terrorist in the Abu Sayyaf organisation.

Sabaya - born Aldam Tilao - was responsible for hundreds of kidnappings, bombings, assassinations, executions, massacres and extortion rackets around the southern Philippines and Malaysia.

One attempt to free eleven foreign hostages from Sabaya’s stronghold on Basilan Island had led to a forty-two-hour gunfi ght between Sawtell’s Alpha company and the rebels. Two weeks earlier, Sawtell’s Berets and Philippine Army Scouts had stormed the terrorists in the jungle boonies behind Sibuco. Sabaya got away, but not before killing most of his hostages.

Sawtell rubbed his jaw as he stared at the screen. Sabaya looked like a movie star and enjoyed enormous loyalty from the local villagers.

He was almost impossible to track, and if he’d been pinpointed, they’d got incredibly lucky. Either way, Sawtell’s boys would want a shot at this.

‘Get CINCPAC, tell them “confi rm”,’ said Sawtell, turning towards the door.

Sawtell followed Davis’s fi nger to a larger screen. It was black with bright green lines on it. ‘Sir, we had an AWACS in the air when the memo came through,’ said Davis sheepishly. ‘I took the liberty of asking them to give us a lock.’

Sawtell didn’t like coy. ‘What is this, Twenty Questions?’

‘Sir, the AWACS has eyes on a pizza box.’

Sawtell gave Davis a quick look, then focused back on the screen.

‘Are they on the water?’

Sawtell stared at the screen. If Sabaya was anywhere near that boat, he’d bail pronto if he heard one hint of helo engine. They’d do this by sea.

‘Print it,’ said Sawtell, nodding at the memo, ‘then get it to the locals asap.’

As Sawtell moved away he almost crashed headlong into the CIA white boys rushing in, obviously tipped off through their own channels.

‘Be ready in fi ve,’ said Sawtell as he passed them. ‘Only one of you though. And come loaded - this is for real.’

‘Don’t know, but give him my regards when you fi nd him.’

Colonel Dave Henson couldn’t make a decision without making seven phone calls. Which was a shame, since Colonel Henson was technically in charge of Enduring Freedom.

Sawtell moved through the centre of the white guys and said to the staff sergeant at the desk, ‘Give me a fi ve-minute call on Alpha and Bravo. Green for Go.’

As he pushed through the demountable’s front door and into the tropical heat Sawtell saw Davis fl y out of a side door and head to the Filipino area of the compound. The locals would get to lead the op - as politics dictated - but the Berets would be there every step of the way.

Abu Sabaya!
thought Sawtell to himself, the adrenaline now racing.

The Philippine Navy SWAGs were waiting at the fenced-off military annexe of Port Zamboanga when the Green Berets’ Humvee convoy arrived. Floodlights lit the huge wharf apron and the hangars. Sawtell issued orders for the sergeants to load the boat, then he made for the fi rst Navy vessel, a forty-foot open-deck powerboat painted in matt olive. It was fi lled with camo-fl ashed Philippine special forces dressed in black fatigues - the SWAGs. Sawtell guessed there were twenty of them. They looked well-armed with their customised Colt M16 A2s and fl ash grenades on their webbings.

One of them stood abruptly and jumped onto the dock. Lieutenant-Colonel Miguel Arroy, Sawtell’s counterpart. They greeted each other informally, as Special Forces etiquette required.

‘We still live?’ he asked, pointing to Sawtell’s throat mic.

Sawtell nodded. He’d been taking updates from the AWACS during the ride from Camp Enduring Freedom and the airborne surveillance people still had a lock on the pizza.

Within minutes the two-boat fl otilla was ready to move out. The boats’ confi guration meant the soldiers sat back to back down the centre, with a skipper at the rear.

The SWAGs glistened in the southern Philippine heat. It didn’t matter how advanced the materials, full battle kit in the tropics was a walking sauna. The Berets wore kevlar helmets and matt-black jumpsuits. Their fl ashings were boot-blacked along with their M4 assault rifl es. Men went through their rituals - rubbing crucifi xes, checking their weapons for load, playing with neckerchiefs worn since Kandahar, play-punching each other. Some closed their eyes, others sang to themselves. Several vomited quietly over the gunwale.

The only thing that wasn’t happening was movement. As Sawtell and Arroy went through a mission brief, the Americans’ radio system came in with a direct patch through to Colonel Henson, who was in Jakarta.

Sawtell took the call, unable to believe what he was hearing.

Henson wanted the mission put on hold till some intelligence guy could be fl own into Zamboanga.

‘I hate to do this to you, John,’ came the high nasal sound of Henson’s voice, ‘but my hands are tied on this one - you know how it is.’

‘Sir,’ said Sawtell, doing his best to conceal his frustration in front of his men, ‘we’ve already got intel on board …’

A drop of sweat trickled down Sawtell’s upper lip, onto his teeth.

‘Jesus, Johnny,’ said Henson, using the name only Sawtell’s football buddies dared call him. ‘You think I didn’t tell them that?’

Sawtell knew Henson hadn’t told the brass anything like that.

‘Thing is, CINCPAC wants this intelligence guy in the boat, so he’s in the boat. Got that, Captain?’

Sawtell stamped his leg, and sweat dripped into his right boot. He looked over to see Arroy staring at him.

‘I got him timed for ten minutes,’ said Henson. ‘And Johnny -

he’s one of the good guys, okay? He’s Australian.’

The Australian arrived early - but he might as well have been seven hours late by the time the Black Hawk had blasted in over the harbour, dropped its human cargo on the two-hundred-year-old quay and taken off into the night.

Sandy-blond and pale-eyed, the Australian was about six foot and built but not worked on. He was all arms and legs but a smooth mover. He wore dark blue overalls, special forces boots and a black Adidas baseball cap pulled low. A black Cordura sports bag was slung over his shoulder.