We met on an airplane (economy class) and kissed most of the flight home. Over the Atlantic, we decided to fall in love. When the plane touched down at JFK, he hadn’t changed his mind. When he carried me over the threshold of my apartment, no Mrs. Wattlesbrook lurked in the shadows. While he was in the kitchen, I picked
Pride and Prejudice
out of my (miraculously) still-living houseplant and tucked it into a harmless spot beside all the other DVDs, spine out and proud

HUGE THANKS, OBVIOUSLY, TO THE superhuman Jane Austen for her books. Besides those masterpieces, I also reviewed (obsessively) the BBC 1995 production of
Pride and Prejudice
, as well as
Emma
(1996),
Sense and Sensibility
(1995),
Persuasion
(1995), and Patricia Rozema’s gorgeous revision of
Mansfield Park
(1999).

I’m also indebted to Daniel Pool’s
What Jane Austen Ate and Charles Dickens Knew
for period information.
The World of Jane Austen
, by Nigel Nicolson, was also useful, and I scoured the Web site Jessamyn’s Regency Costume Companion for clothing information. Despite the research, I’d be surprised if I didn’t make mistakes, but they’re sure to be my fault, so please don’t blame my sources.

Special thanks to the amazing Amanda Katz for her inspired editing, as well as to Nadia Cornier, Cordelia Brand, Ann Cannon, Rosi Hayes, and Mette Ivie Harrison. And can I just say again how much I love Bloomsbury? I do. Everyone there is so cool. And also quite attractive (though that hardly seems fair, does it?).

And honey, you know that this Cohn Firth thing isn’t really serious. You are my fantasy man and my real man. I need no other fella in all the world besides you. It’s just a girl thing, I swear.

a note on the author

SHANNON HALE IS THE AUTHOR of four books for young adults:
The Goose Girl
,
Enna Burning
,
River Secrets
, and the
New York Times
best-seller
Princess Academy
, for which she received a Newbery Honor. She and her husband are working together on a graphic novel. Shannon and her family live in Salt Lake City, Utah. 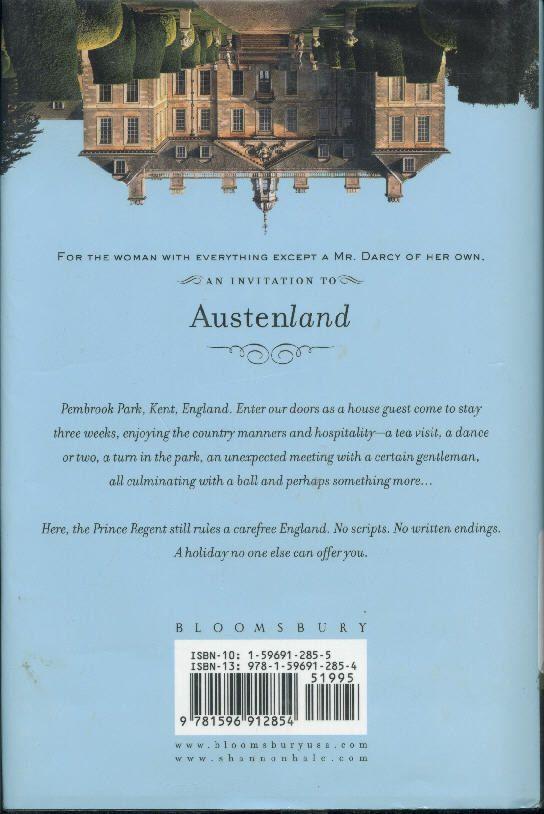 Brethren: An Epic Adventure of the Knights Templar by Robyn Young
The Belgravia Club by Fenton, Clarissa
Blue Roses by Mimi Strong
Created (Talented Saga) by Davis, Sophie
Kristin Lavransdatter by Undset, Sigrid
The Cat Who Had 60 Whiskers by Lilian Jackson Braun
Where's My Wand?: One Boy's Magical Triumph Over Alienation and Shag Carpeting by Eric Poole
Save Johanna! by Francine Pascal
Bond Girl by Erin Duffy
All the Wright Moves by McKenna Jeffries and Aliyah Burke
Our partner