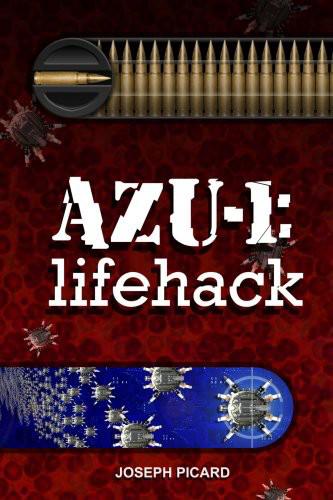 Regan's a young lady with the usual problems. Messy breakup, no job, new town, and unrequited love for a lady who's inconveniently straight. Oh, and a legion of walking corpses. -- In the near future, microscopic nanotechnology turns to the biological world. Great minds work together, and grow more excited with every advancement. When the experimental nanotechnology falls into the hands of a man with no purpose but bloodthirsty mischief, a city pays the ultimate price. While the world wonders what happened, no one knows that this may only be the beginning. A debt to a brother, duty to the military, and a feeling of responsibility for one who's been lost, all fuel the need to resolve a crime against humanity that has had the corpses of it's victims wandering dead streets for two years. As the puzzle pieces begin to click, an unwanted love continually gets in the way between the woman who can't stop loving, and the woman who can't accept it. ...and a cruel imagination plots it's next step...

Also from Joseph Picard,
Lifehack's follow up, 'Watching Yute', available at Smashwords.com
or in printed formats through the author's site,
ozero.ca

This ebook is licensed for
your personal enjoyment only. This ebook may not be re-sold or
given away to other people. If you would like to share this book
with another person, please purchase an additional copy for each
person you share it with. If you’re reading this book and did not
purchase it, or it was not purchased for your use only, then you
should return to Smashwords.com and purchase your own copy. Thank
you for respecting the hard work of this author. All rights
reserved, including the right to reproduce this book or portions
thereof in any form whatsoever.

Special thanks go to my volunteer
editing force: Dolores (my mum) Adam Zilliax, Meggin Dueckman, and
Carrie Shannon who has also been a great supporter in the launch of
the first edition.

Want a programmable molecule? Build a
machine. Build the smallest machine you can, then make it build
things so small that you yourself could not have made it. Make this
tiny new machine build something even smaller.

If you continue along this path until
you can’t even see your machines without a microscope, even smaller
than one millionth of a meter, you’ve entered the realm of
nanotechnology.

In 2008, these machines are already
being used to create new materials for every day use, such as
clothing, packaging, various chemicals, and incredibly small
circuitry, but research is striving towards much more ambitious
ends.

In effect the science is about
manipulating microscopic particles, perhaps down to atoms, using
these microscopic robots, called nanites. Essentially these would
be programmable molecules. And, to make things easier, a few could
build more, making construction of nanite fleets nearly
self-automated.

Construction could one day be as easy
as leaving raw materials out for well programmed and directed
nanites and watching what you want built, molecule by molecule. It
would seemingly grow, and the speed of this would be related
closely to the size of your nanite fleet. But of course you build
many nanites, because it would be easy to once you taught nanites
to do it for you.

Curing a disease would only be a matter
of teaching a fleet of nanites what to destroy, injecting them into
a patient, and having the nanites work faster than the cells of the
disease could grow. They could be programmed to hunt any number of
harmful elements in a body; a virus, bacteria, and cancers.
Theoretically they would all fall with similar ease, regardless of
their resistance to medications as we know them. A new immunization
could be as easy as downloading the latest patch and updating your
nanites. Poof. Suddenly they also attack the dreaded bird flu, mad
cow, or any other new scary thing they discover.

Food could be created on a molecular
level as well. Who needs an actual plant when an armada of
microscopic robots could be given dirt, water, and sunlight, and
continuously produce endless identical, perfect fruit, until one of
the base ingredients were used up?

The potential applications seem
limitless. Nanite clothing might change to whim and continuously
clean themselves, or clean the wearer. Buildings or furniture laden
with nanites might change to suit purpose or just melt away
temporarily when unwanted. Airborne nanites that avoid being
inhaled, and spend their time cleaning the air, or waiting for
other commands.

And you could do it all without anyone
even noticing the nanites themselves.

Of course, any technology goes through
difficult spots in its infancy. What would you do with a
programmable molecule?

Regan threw a second high heel shoe at
her newly ex-girlfriend Kris with every ounce of strength she
could. The shoe missed its target and struck the bedroom doorframe.
“It’s fucking over, you slut! Strike goddam three! That I know
about!” Regan’s wavy black hair tossed across her face, but her
enraged brown eyes glared clearly though at Kris.

Kris calmly took another cautious step
forward with a gentle smile and a sympathetic look from behind her
thin rimmed glasses. “Honey, I said I was sorry! You’re not going
to throw it all away just-“

Regan launched a blouse at Kris that
she had borrowed. It didn’t fly as well as the shoe. Why couldn’t
it have been another shoe, or a harpoon? “Throw what away? Eight
months of trying to make this work while you screw anything that
catches your eye? I’m really gonna miss that!” She mashed down on
the lid of her suitcase. Its contents, that of her duffle bag, and
the outfit she had on, were the sum of her worldly possessions.
That and the bus ticket waiting for her at the terminal that cost
her the remainder of her liquid assets.

“
Honey, I-“ Kris was cut
short, and had to make a hasty side-step to evade the suitcase as
Regan barged out of the bedroom. “Regan, do you know how silly you
look, running away from home like this?”

Regan growled as she stomped on. She
stopped and spun on her heel to glare back at Kris. Past Kris lay
the bed in which Kris had once again betrayed Regan. The first time
was painfully forgiven. The second time was forgiven with disgust
at herself for allowing Kris to get away with it. This third time
had driven Regan into boiling rage. There was likely more which she
had never learned about.

“
Running away from home?
Home is where the heart is, Kris.” Regan stormed to the front door,
duffle bag swinging from her shoulder, suitcase hitting walls
heedlessly as she dragged it. She grabbed the black leather jacket
hanging by the door and threw it on over her tank top and the strap
of the duffle.

She pushed herself and her luggage
through the door, and turned to close it. Pity the door swung into
the apartment instead of out. It would have been very satisfying to
kick it shut with her punk-ish boots. Nah, fuck it. If she couldn’t
close it her way, let Kris close it. No, to hell with that, she
needed the satisfaction of the slam. She reached in for the
doorknob with one final glower at Kris, and yanked it shut. The
impact resonated through the walls.

Regan stood in the hall and took a deep
cleansing breath. Was she crying? No? Good. Kris was only allowed
to see the hate. Save the tears for the day when the pain is far
behind.

“
Inky or Pinky?” Jonathan
Coll leaned over the table-top arena walled by clear plastic, and
stared down at the two quivering, blood matted rats.

”
Doctor Coll, you know I’m
not really into that.” Across the lab, Jonathan’s pet intern tended
to the most recently assigned task of tedium.

Jonathan chortled, and brushed a raven
bang out of his eyes. “Oh come on Scott. Scotty, Scotterino. Inky
or Pinky?”

Without pulling his attention away from
his work, Scott sighed in mild exasperation. “Oh, I don’t know.
Which has the series fourteen nanites, and which has the fifteen
series?”

“
Ha ha!” Jonathan gleamed,
proud of his work. Both rats were teeming with microscopic machines
which could one day allow a person to continue to go on despite
considerable injury and get medical attention later. Eventually the
nanites would be at the command of the person they’re injected
into, but for the rats, a computer took more direct control. “Pinky
is series fifteen, but Inky is now sixteen!”

Scott raised an eyebrow “Sixteen? When
did that happen?”

“
When my brilliance made
providence for it to happen!”

“
Sixteen is a bit better at
maintaining its own numbers in a living immune system, but I had to
sacrifice a bit of tissue repair for the host. As you can see, Inky
kinda looks like shit.” An understatement.

Scott couldn’t see, as he was still on
the other side of the room. “I don’t know. Whichever rat’s been in
the least fights.” Scott simply wasn’t playing along. Jonathan
couldn’t remember which had been in more fights anyway.

“
Fine. I’ll take Inky.”
Jonathan stood up straight, gazing down at the rats as were he a
god. He positioned his finger over a button on a nearby terminal
and announced sternly, “Round ninety four! Fight!”

He pressed the button and the nanites
in the rats took control, acting as a nervous system, ignoring the
hosts’ weaker wills. The two rats looked around stiffly while the
software did its best to identify the relevant items in the hosts’
surroundings.

Wall, wall, wall, unreachable opening,
wall, target! Inky’s nanites were the first to come to terms with
the tactical situation, and launched Inky at Pinky with no further
hesitation. Inky’s small but unnaturally strong jaw clamped onto
Pinky’s midsection, squeezing out an involuntary pained
squeak.

Across the room, Scott winced to hear
yet another such battle.

Jonathan grimaced. “Man, I have to get
the object recognition routines polished up. At this rate, it’s
almost always just a matter of who sees who first.” Jonathan
fiddled the terminal interface and switched the nanite colonies
into repair mode. Now in control of their own bodies again, the
rats were free to whimper and cry out in pain.

But Inky didn’t. Jonathan flipped a
couple screens around on his terminal. “Oh damn! Inky died! The
second I put them into fight mode! Inky won, and was dead the whole
time! Awesome!”

“
I’m sure Inky will find
that to be a great consolation.” Scott mumbled. Scott’s dad wanted
him to be an accountant, but no! Why waste his mind on work for
calculators, when he could go into research sciences, and watch his
egocentric boss mutilate innocent rats? Anyone need their taxes
done?

Regan awoke. Her head leaning against
the window, the first thing she saw was the side of the road
whizzing by, a parade of dry vegetation. Since she left Kris’, the
view out this window had changed from lush greens, to
this.

Yellowish brown bushes blended into the
parched terrain, all the way to the horizon. This was the edge of
the Yute desert. A half day’s drive farther in would surround you
with sand.

What a stupid place to build a city.
Autar was looming ahead, the much hyped jewel of the future. The
most recognizable feature of Autar was its four cornerstone
towers.

The beige cornerstones were obscene
engineering marvels, each tower being two hundred floors high with
a footprint of three by three blocks. Between the cornerstones
spanned four enormous bridges that connected the mid-sections of
each cornerstone. The bridges were three blocks wide each and acted
as a second layer of streets to develop on, a hundred feet above
the ground. The bridges and the ground below bristled with
monolithic buildings, each glistening with corporate
pride.