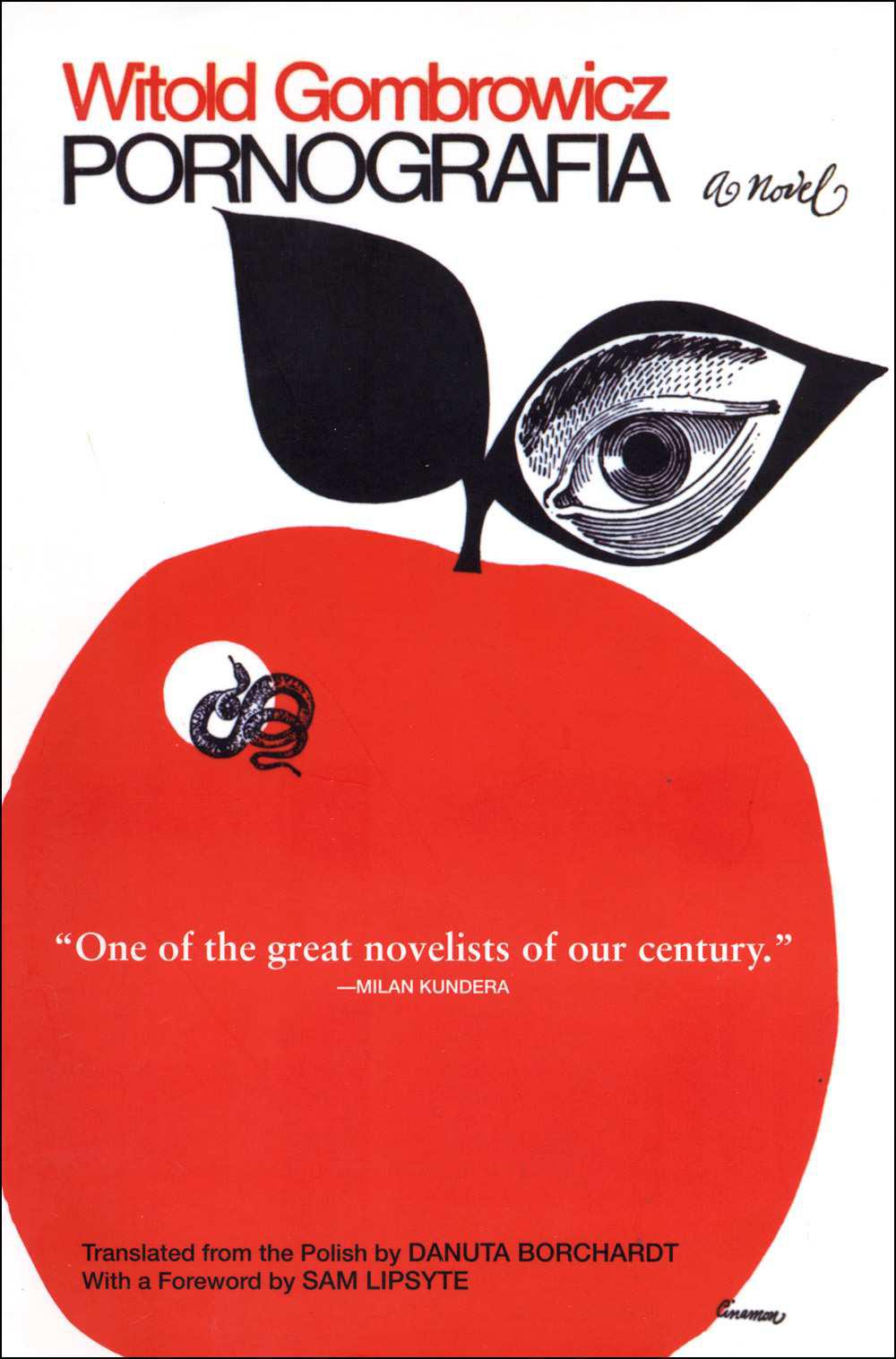 Other Works by Witold Gombrowicz

A Guide to Philosophy in Six Hours and Fifteen Minutes

A Kind of Testament

Translated from the Polish
by

Originally published in the Polish language by Instytut Literacki (Kultura) in Paris, France, under the title
Pornografia,
copyright © 1960.

First Grove Press edition published in 1978, together with
Ferdydurke.

Published simultaneaously in Canada
Printed in the United States of America

The story sounds like the set-up for a very dark joke. It is 1939, the eve of Hitler’s invasion of Poland. Somewhat oblivious to the coming catastrophe (like most everyone else), a writer from Warsaw accepts an invitation for an ocean cruise to South America. He’ll be back in a few months, refreshed for his next project. But once he sets sail there is a slight problem with his itinerary: World War Two. Trapped in Buenos Aires with little money and no Spanish, the writer forges a life there for over two decades. Though he eventually returns to Europe, he never sees Poland, the country that formed (and infuriated) him, again.

Such was the odd fate of Witold Gombrowicz, one of the major writers of the modern age, though readers in the United States have not heard enough about him. International acclaim came late to Gombrowicz, with the French translation of his first published novel,
Ferdydurke
(1937). This masterpiece takes on more than a few literary forms in its hilarious skewering of European philosophy, cultural upheaval, and generational
struggle. It remains one of the funniest books of an unfunny century.

Pornografia
(1960), published over twenty years later, mirrors many of the earlier novel’s themes, but in many ways it is a strikingly different work from
Ferdydurke.
It is also possibly a better one, tauter, its contents under more ferocious pressure, its savagery and comedy more directed. Narrated by a delightfully disturbing and nuanced man named (why not?) Witold Gombrowicz,
Pornografia
embraces an array of corrosive conflicts, between boys and girls, children and grown-ups, anarchy and the law, inferiority (life) and superiority (death), and competing versions of the real. (When the categories begin to deform and melt together, of course, things get truly, intriguingly, dicey.) Another opposition thrown into the pot is war and, if not peace, then a maddening state of not-yet-war. The latter seems especially important because
Pornografia
is set in a relatively calm pocket of Nazi-ravaged Poland, a place Gombrowicz never knew, and its plot consists of the erotic manipulations of a pair of would-be resistance fighters upon some increasingly witting farm teens. If that sounds like the makings of a gleefully tasteless farce, it might be because on a certain diabolical level
Pornografia
is one.

But it is also a profound behavioral study, though Gombrowicz eschews the staid tactics of some literary traditions, whose human specimens writhe under pins of omniscience. Here the psychology—the observations, projections, paradoxes, negations—belong to the panting insatiability of “Gombrowicz” himself, as he negotiates sexual devastation, poisonous
and ecstatic social maneuvering, moral collapse, political ambivalence, and a country manor murder. The manic oscillations of this voice escort us into the wonderful, horrible core of the novel, a whirl of masks, duplicity, flesh and fragmentation.

It is a universe where an atheist must pray with true sincerity, deceiving even himself, to cover up the “immensity of his non-prayer,” where a girl’s hand is “naked with the nakedness not of a hand but of a knee emerging from under a dress,” and where all human endeavor might just be a “monkey making faces in a vacuum.”

Outlandish metaphors, syntactical bolo punches, arias of exquisite paranoia, these are not adornments in Gombrowicz, they are the essence of his style. His word play is deep play. “In the end a battle arises between you and your work,” he wrote in his public diaries, “the same as that between a driver and the horses which are carrying him off. I cannot control the horses, but I must take care not to overturn the wagon on any of the sharp curves of the course.”

Helping to keep the wagon upright here is Danuta Borchardt’s brilliant new translation, the first in English from the original Polish. Borchardt’s
Pornografia
honors both the wildness and the precision of Gombrowicz. She preserves his sudden and propulsive tense shifts and reveals a treasure of new cadences and swerves. Consider an older translation’s description of the pious Amelia’s sudden undoing in conversation with the novel’s chief instigator, Fryderyk: “She was dumfounded (sic) and disarmed …” Borchardt’s version is not only more vivid, but pivots
on the weirdly compelling repetition of a word: “Knocked out of the game … she was like someone whose weapon had been knocked from her hand.” Better still is Borchardt’s Gombrowicz’s take on nightfall. The older translation details “… the sudden expansion of the holes and corners that fills the thick flux of night.” Fine, if a little vague, but it is no match for “… the intensification of nooks and crannies that the night’s sauce was filling.” The “night’s sauce” is almost more than we deserve.

But it is never a matter of what we deserve. I certainly didn’t deserve the gift of Gombrowicz when a good friend gave me
Ferdydurke
many years ago. I was just a young jerk who thought he had a fix on the frontiers of literature. But that book and others revealed the raucous speed and sublime vaudeville the right kind of runaway wagon could deliver. All who enter may revel in the many-layered excitements of
Pornografia,
though the reader is advised to refrain from slapping easy rejoinders to the existential difficulties the novel raises. “The primary task of creative literature is to rejuvenate our problems,” said Gombrowicz in
A Kind of Testament,
a series of interviews with Dominique de Roux. And Gombrowicz did exactly that, through philosophy, satire, critique, all of it powered by a subtle and vicious comic prose that continues to offer dazzling views of our individual and collective derangements.

“I am a humorist, a joker, an acrobat, a provocateur,” he once said. “My works turn double somersaults to please. I am a circus, lyricism, poetry, horror, riots, games—what more do you want?”

Let me know if you think of anything.

A translator does not work in a vacuum. I therefore want to share with the reader the names of those who with their works or in personal communications have informed my translations. You will find the list at the back of the book.

This is the third of Gombrowicz’s novels, and most likely the last, that I have translated. Since there were omissions on my part in giving credit to those who are due, I would like to make amends. Beginning with John Felstiner and our translation group at Skidmore College in 1998, I want to go on expressing thanks to my friends Nona Porter and Alan and Barbara Braver whom I have buttonholed on many occasions. Professor Stanislaw Bara
ń
czak was the one who gave me the first impetus and encouragement to translate the first book—
Ferdydurke.
I had given Thom Lane previous credit, but this bears repeating. I want to thank him for his indefatigable assistance, as the native speaker of American English, in translating the three novels. His wide reading of literature and his keen intuition, since he knows no Polish, helped me
to accurately express Gombrowicz’s ideas. I am also most grateful to Alex Littlefield, my book editor, for his sensitivity in approaching this difficult and idiosyncratic text. Last but not least, my thanks go to Eric Price, the C.O.O. and Associate Publisher of Grove/Atlantic, Inc., for accepting my translation for publication.

The first thing that strikes one about Witold Gombrowicz’s book is its title, so I will open with the author’s thoughts on its translation. In his conversation with Dominique de Roux in
A Kind of Testament,
Gombrowicz tells de Roux how he began writing the novel in Argentina: “… The year was 1955 … As usual, I began scribbling something on paper, with uncertainty, in ignorance, in terrible poverty that had visited all my beginnings. It slowly became rich, intense, and thus a new form emerged, a new work, a novel which I called
Pornografia.
At that time it wasn’t such a bad title, today, in view of the excess of pornography, it sounds banal, and in a few languages it was changed to
Seduction.
” Perhaps when he chose to call his new work “Pornography,” the word suggested something rare, hidden, a dark secret. I have left the title in Polish to convey shades of meaning the English may not have.

The Northern Clemency by Philip Hensher
The Gilded Curse: Will the young heiress be the next victim of her family's curse? by Marilyn Turk
Invisible Boy by Cornelia Read
Sandy Sullivan by Doctor Me Up
Perfectly Reflected by S. C. Ransom
Aunt Dimity and the Village Witch by Nancy Atherton
A Fistful of Rain by Greg Rucka
The History Thief: Ten Days Lost (The Sterling Novels) by Nagle, Joseph
The Drift Wars by James, Brett
So Mote it Be by Isobel Bird
Our partner