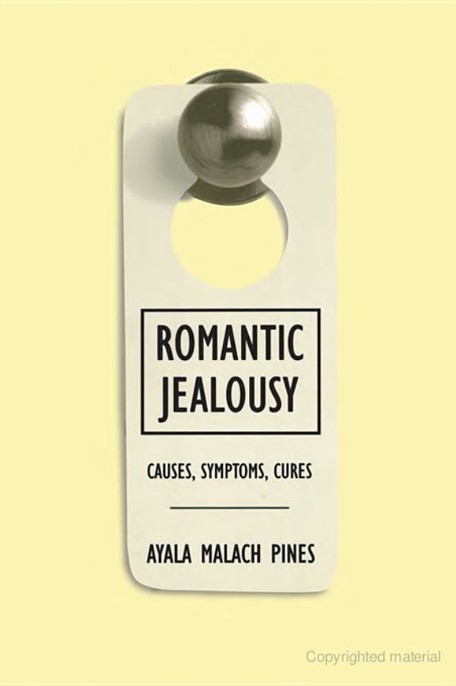 Other Books by Ayala Malach Pines

The Juggler. A Working Woman: Problems and Solutions

How We Fall in Love

1. The Green-Eyed Monster or the Shadow of Love?
1

3. The Unconscious Roots of Romantic Jealousy
45

4. Treating the Couple, Not the Jealous Male
67

5. Men Get Angry, Women Get Depressed
91

Appendix B: The Romantic Jealousy Questionnaire
227

In the summer of 1978, 1 flew back to San Francisco from Toronto, where I had attended a convention of the American Psychological Association. On the plane I sat next to Elliot Aronson, one of the leading social psychologists in the country and a dear friend whom I admire greatly. We were chatting about various things when he said, "What do you know about jealousy?"

"Jealousy?" I responded, surprised. Ile explained, "I was asked to write an article called 'What We Don't Know About Jealousy' for a new behavioral science magazine. The problem is that I don't know much about jealousy-hence the title. But I thought if you were interested in the subject, we could pool our ignorance and have some fun writing the article together." While I definitely had my own personal experience with jealousy, I had never given much thought to it as a subject for study. I knew as much about it as Elliot did, but the offer was such a great compliment that I said yes right away.

The next clay, in Berkeley, I went to the university library and did a computer search to find out what had been written about jealousy. There was quite a lot. I buried myself in literature on romantic jealousy written by novelists, poets, philosophers, anthropologists, sociologists, psychiatrists, and psychologists. While the volumes written were enormous, many questions were left unanswered. This was the subject of the article Elliot and I wrote.

Although the magazine folded before the article could be published, I became "hooked" on jealousy and, for the following twenty years, continued to study it. I've worked with jealous individuals and couples in my private practice both in California and Israel and have led jealousy workshops and collected questionnaires from close to a thousand people. I've worked in prison with male inmates serving time for "crimes of passion" and both inter viewed and collected questionnaires from female inmates. I've worked with couples in open relationships. I've studied two urban communes practicing open relationships: one in which members succeeded in overcoming their jealousy, the other in which jealousy was a major problem and eventually caused the break-up of the commune. I've also reviewed the extensive and steadily growing literature on jealousy. This book is based on these experiences, research, and clinical work.

While these approaches are considered by many theoreticians to be contradictory, I use all five of them in any work. I believe anything that helps a person with a jealousy problem can and should be used. This book reflects that conviction.

What the Book Is About

This book is for anyone who seeks a better understanding of romantic jealousy. It was written with three kinds of readers in mind. The first is the clinician who works with people struggling with a jealousy problem. The second is the person who struggles with a jealousy problem or with a mate's jealousy. The third is the intellectually curious person who might have encountered jealousy, either within himself or herself or in another, and is interested in learning more about it. Each chapter should have something for all three types of readers.

The second chapter addresses a series of questions (as presented in The Romantic Jealousy Questionnaire) that are aimed at helping readers explore their romantic jealousy and compare their responses to those given by over seven hundred people.

The third chapter explores the unconscious roots of jealousy from the perspective of the psychodynamic approach, which views jealousy as a problem in the mind of the jealous individual that is best treated by individual therapy. This chapter shows how childhood events help shape adult jealousy.

The fourth chapter presents the systems approach, which proposes that jealousy occurs within the dynamic of a particular relationship and can best be treated through couple therapy. The chapter shows how couples collude to keep a jealousy problem alive.

The fifth chapter presents the sociobiological approach, in which jealousy is seen as an innate response resulting from evolutionary forces that are different for men and women. The chapter suggests that jealousy may be a universal problem for couples.

The sixth chapter discusses jealousy in different cultures and presents the social-psychological approach. According to this approach, the culture determines when people feel jealous and how they express their jealousy. The social-psychological approach encourages people to make an attributional shift in their explanation for their jealousy from "I'm a jealous person" to "I get jealous in certain situations."

Chapters seven and eight examine the range of responses to romantic jealousy. One chapter discusses people who succeeded in overcoming their jealousy and have established long-term open relationships. The other chapter discusses people who were overcome by their jealousy and committed crimes of passion. Whereas chapter seven presents the views of people who believe that jealousy is learned and thus can also be unlearned, chapter eight presents the view that, under the all-powerful influence of the green-eyed monster, some people can become temporarily insane and commit the most "monstrous" and violent crimes. The chapter provides an opportunity to gain an appreciation for the explosive potential in jealousy and learn how to defuse it.

Chapter nine is devoted to coping with jealousy. It presents the cognitive-behavioral approach, in which jealousy is seen as a learned response that, if inappropriate, can be unlearned and replaced with a more appropriate response. The chapter offers a variety of cognitive and behavioral techniques for coping with a jealousy problem. It also makes reference to techniques inspired by the other approaches presented throughout the book. The goal of all these coping techniques is to help individuals and couples protect their relationships in positive and constructive ways so that something good can come out of their jealousy problem.

My view that jealousy can be a growth-enhancing force is explored in chapter ten and demonstrated through the analysis of an unusual triangle relationship. Beyond the benefits to be gained from each chapter, my hope is that the book as a whole will help readers turn romantic jealousy into a useful signal they can use to improve themselves and their relationships.

I have enjoyed my work on jealousy immensely and loved writing this book. I hope my excitement about the subject comes through.

I would like to thank my friends and colleagues who read this book and helped improve it with their thoughtful comments. These include Dr. Gordon Clanton, Dr. Bernie Zilhergeld, Professor Clair Rabin, Dr. Loise Shawver, Dr. Laura Steckel, and Kathy Knopoff (on her way to a brilliant career in psychology). Discussions With Professors Elliot Aronson, Murray Bilmes, Jack Block, and Troy Duster, as well as with Tsafi Gilad and Israel Segal, helped crystallize my ideas about jealousy.

1 would also like to thank the team at Routledge that was responsible for publishing this book for their enthusiasm and support. This includes first and foremost Heidi A. Freund, the publishing director. Heidi's warmth and high energy make her a delight to work with. Other people that were a joy to work with are Anthony Mancini, the managing editor; Ilene Kalish, the assistant editor; Ron Longe, the publicity manager; Santa Sahni, the editorial assistant; and Beth Mullen, who is in charge of rights and permissions.

I owe special thanks to my agent, Judith Weber, who besides being a dear friend is a wonderful editor and an intelligent and insightful reader who helped improve the book greatly both in content and in style. Wanda Cuevas, a member of the Sobel Weber Associates professional staff, also provided valuable feedback and support.

Anne Savarese, my editor at St. Martin's Press, where the book was first published, has gone through every version of the book with a thoroughness I have never encountered before. The result is an invaluable contribution to the book, for which I am extremely grateful.

The greatest thanks, however, are reserved for the people in my private practice and participants in my workshops and research, who opened their hearts to me and shared some of their most painful and difficult experiences with jealousy. This book could never have been written without their contribution.

The Green-Eyed Monster
or the Shadow of Love?

O, beware my lord of jealousy! It is the green eyed monster, which doth mock the neat it feeds on.

He that is not jealous is not in love.

Over It (The Kiss Off #2) by Billington, Sarah
The Mealworm Diaries by Anna Kerz
The Right Treatment by Tara Finnegan
Crossing by Andrew Xia Fukuda
El lector de cadáveres by Antonio Garrido
My Children Are More Precious Than Gold by Risner, Fay
The City's Son by Pollock, Tom
A Face in the Crowd by Lynda La Plante
Saving Ever After (Ever After #4) by Stephanie Hoffman McManus
KS17.5 - Cherchez la Femme by Dana Stabenow
Our partner