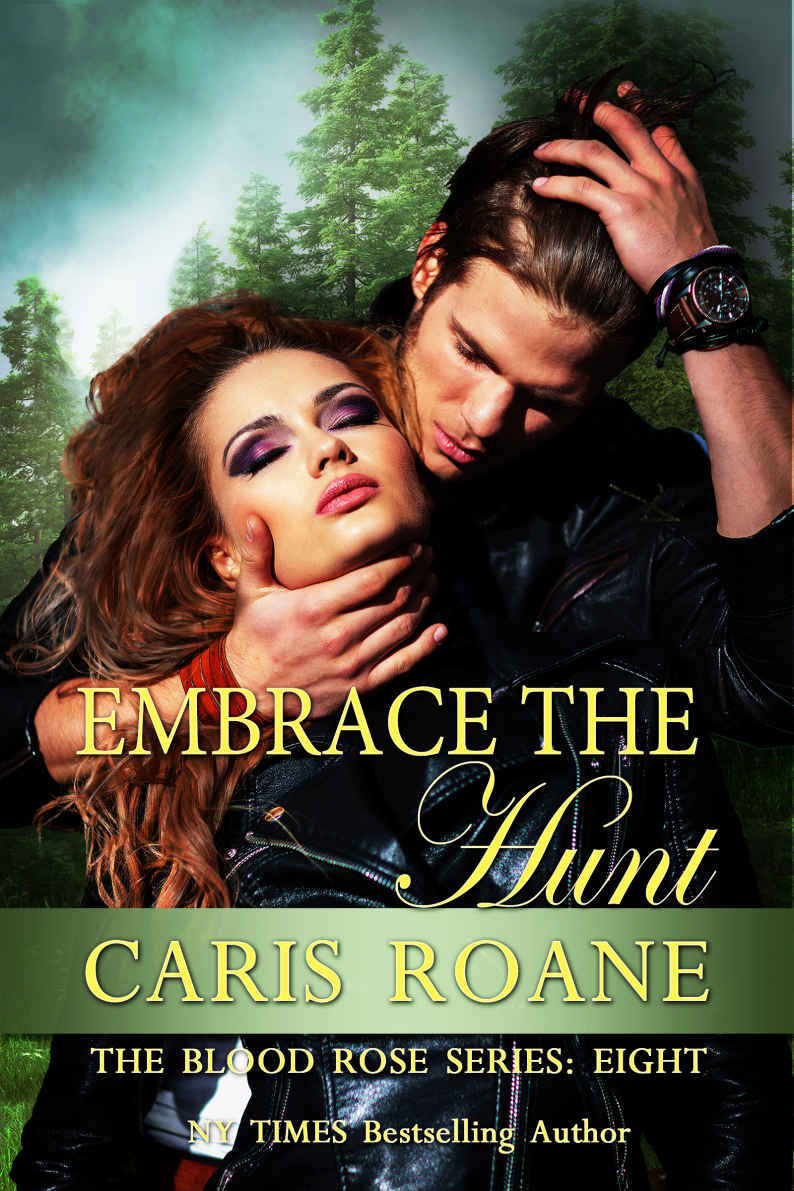 Welcome to the eighth installment of the Blood Rose Series, EMBRACE THE HUNT. In this book, Mastyr Ian joins forces with the Ruby Fae, Regan, to break down a deadly spell concealing the true scope of Margetta’s army. But will they be able to overcome the effects of a terrible massacre that haunts each of their lives?

A powerful vampire warrior. A beautiful fae of great power. A war that threatens to destroy their love for the second time…

Mastyr Vampire Ian never wanted to see Regan again. He blamed her for the massacre at Raven’s Overlook, an attack that killed his sister and her children. He’s convinced Regan enthralled him, using her extensive fae powers to keep him by her side. If he’d been in his realm that night, he could have saved 200 people. Instead, he was caught up in a passionate affair with the woman known as the Ruby Fae. However, when the enemy abducts Regan, Ian goes on the hunt for her. Finding her trapped behind a wall of mist, he helps her escape the Ancient Fae’s fortress. Reunited, old passions run hot once more, but will the past keep him from embracing the woman he’s loved all these years?

Regan never stopped loving Ian even though they’d dated several centuries ago. But he’d always blamed her for the terrible events at Raven’s Overlook. When she feeds him from her vein and learns she’s a blood rose, she’s devastated. Ian hurt her badly in times past by making her a scapegoat. But when she’s forced to work alongside him to help battle the deadly Invictus wraith-pairs, her love for him rises once more. Yet, can she ever trust him again, when he swears she enthralled him that fateful night?

For the latest releases, hottest pics, and coolest contests, be sure to sign up for my newsletter!!!

Now Available: Rapture’s Edge 1 Awakening, the continuing saga of the Guardians of Ascension, featuring Duncan and Rachel. He’s a warrior to the bone, but she only wants peace!

Coming Soon, the final installment of the Blood Rose Series, Book 9, EMBRACE THE POWER. This story features Mastyr Stone as he battles Margetta, the Ancient Fae, for control of the Nine Realms.

Be sure to check out the Blood Rose Tales Box Set – TRAPPED, HUNGER, and SEDUCED -- shorter works for a quick, sexy, satisfying read. For more information:
http://www.carisroane.com/blood-rose-tales-box-set/

An hour from dawn, Ian sat in the dirt at the bottom of a dry streambed, head in hands, waiting for some sign Regan was still alive. With his ass on a couple of sharp rocks and a black scorpion not two feet away, he’d never felt so useless in his life than right now.

A slow-moving river ran through Dark Gorge another thousand feet below the streambed. When the rains came, this dry wash would spill a tall waterfall into the river.

Right now, it was as empty as his efforts to find Regan, the Ruby Fae.

He sat back and twisted his thumb ring. He had a ring on each digit, his way of dealing with shit. All but one of them symbolized the Nine Realms. The tenth ring, the one he turned to let off some steam, represented their world as a whole, which he worked night and day to keep safe.

He also used the heavy bling to beat the shit out of wraith-pairs. Maybe that was part of his problem; he hadn’t been in a good fight for way too long. He enjoyed using his fists, going
mano-a-mano.

Regan had disappeared from the Swanicott Fae Guild a month ago, abducted by the Ancient Fae. In truth, he didn’t know if Regan was alive or dead. But each time he thought he might never see her again, something inside him tightened so hard he couldn’t breathe.

She can’t be dead.
He didn’t know what life was supposed to look like without Regan in it, even though she hadn’t been a real part of his world for a long time. Yet some piece of her lived inside him, a heart beating alongside his own. He’d loved her once with a kind of madness he’d never experienced since.

And never wanted to again.

He lifted his head and stared up at the wall of mist at the top of the cliff. He wore sunglasses, and though it was still full-dark, he could see every detail as clear as day. For the past few decades, he’d become unusually sensitive to moonlight and at times even to the stars and for that reason had to wear shades.

But he could definitely see the mist, something only a handful of very powerful realm-folk could see. To most, the mist created an illusion that the mountain forest was right there and nothing else. What lay behind the mist, he didn’t know, only that Margetta, the woman intent on taking over the Nine Realms, had created it.

He rose to his feet, but listed sideways. Spots hovered in front of his eyes. In his desperation to find Regan, he hadn’t been feeding as often as he should. If he waited much longer, he’d fall into a coma and die.

When a crippling spasm hit his stomach, he knew he couldn’t stay in the streambed a second longer. He’d have to suspend his hunt for Regan for the next fifteen minutes or so to take care of the problem.

Levitating swiftly, he flew above the gorge cliffs and headed to the outpost hamlet of Pikon. The small village was located where the cliffs dropped down to Leberion Plain, not far from the Peralin River.

Once he arrived, he flew down the short main street and saw that a light still blazed in the wrought iron lantern hanging outside the village inn. He landed on the walkway, but lurched forward to plant a hand on the heavy wood door in order to catch his balance. More spots moved back and forth in front of his vision.

Blinking several times, he removed his sunglasses to rub his eyes then put them back on. Even the lantern light hurt.

When he was steady, he jerked the door open and saw one of his regular
doneuses,
Charlotte, sitting on a bar stool in the pub. She wore rust suede, thigh boots, a short denim skirt, and a matching fringed jacket. She held a bottle of beer to her lips, but paused when she caught sight of him.

Setting the bottle down on the glossy wood bar, her eyes widened in shock. “Ian,” she cried, sliding off her stool. “You’ve waited too long again. Sweet Goddess, open my vein now.” She moved swiftly in his direction, her arms outstretched.

“Charlotte, thank the Goddess you’re here.” His gaze had settled on her pale throat, but he stumbled against her, losing his balance.

The lovely fae woman showed some sense and pushed him into the nearest booth. Given his size, he needed to make some room and used a booted foot to push the table to the opposite side. He was dizzy again, and fell backward onto the seat.

She landed on him, holding her long black hair away from her throat. “Dig in, mastyr. Take what you need.”

As his fangs descended, he slid a hand around the back of her neck, tilted his head to the right angle then struck. Within a split-second, he was sucking down her blood.

The whole time his stomach cramped and only began to grow loose when it recognized the substance he needed so badly.

His thoughts however, flew straight back to the wall of mist that had for weeks prevented him from getting to Regan. He had to get back there.

He drank down the critical sustenance, counting the seconds. When he felt as though he could continue on without the risk of passing out, he released her neck and swiped the wounds with his tongue, healing them instantly.

“Mastyr, it’s hardly been a minute.”

“I’ll stay here in case you need me.” She called out to the troll innkeeper. “Will you stay open for him, Shayla?”

“Damn straight, I will. Anything for the Mastyr of Camberlaune.”

When Ian rose to his feet, the dizziness was gone as were the spots that tended to float across his vision when his starvation became acute. He still felt weak as hell, though.

As Charlotte stood up, he placed a hand on her shoulder. “Thanks again.”

She nodded, three quick dips of her chin. “I’m here to serve.”

His lips quirked. “You were always my favorite.”

At that, she giggled. “You forget, Mastyr, your
doneuses
compare notes all the time. You say that to each of us.”

He smiled, adjusting his sunglasses. “Doesn’t mean it’s not true each time I say it.”

His gaze dropped to the slight red patch on her neck where he’d suckled. His instincts told him to stay put and continue making use of Charlotte’s vein, but Regan’s plight called to him. He had to get back to the granite outcrop, to stand vigil, to wait, to hope, to pray she was still alive and he could help her.

An hour from dawn, Regan sat on the tall windowsill of her tower prison, her knees pulled up to her chest, her long gown wrapped around her ankles. While she waited for her last meal of the night, she looked out over the fortress grounds.

A large enemy encampment lay beyond the gray stone walls, made up of row after row of tents housing the murderous Invictus pairs. Yet, even as her gaze passed over the camp, she had a sense that a spell kept Regan from seeing everything that was there.

Margetta had placed her in the tower on purpose, giving her a view not just of the roof of the large stone fortress but of her army as well. Seeing so many Invictus pairs ready for war had a strong psychological effect. The thought that there might be more than even what she could see, had put a chill in her bones. Just how big was Margetta’s army?

The Ancient Fae had painted a frightening picture of Regan’s future as well. She planned to bond Regan with a mastyr vampire of her choosing, one aligned with Margetta. The vampire she’d chosen would not only rule Camberlaune, but would also serve as the leader of the entire Nine Realm’s vampire community.

But, no, she hadn’t named the man yet.

The only thing that surprised Regan was that Margetta hadn’t already forced the bond.

In a moment of anger, Regan had asked sarcastically, “Why haven’t you brought my husband to me? You must know I’m desperately lonely for company.”

Margetta had lifted a lovely brow. “Don’t you know? Your power has not yet been fulfilled. I only await the proper hour.”

What hour? And what did she mean her power hadn’t been fulfilled?

Margetta was a physically beautiful woman, with exquisite, wide-set, violet eyes, arched brows, a straight nose and softly pointed fae chin. She had long, blond hair worn throughout the past month in large curls to her waist. Except for the hollow expression in her eyes and the occasional malevolent smile, she looked like a princess from some of earth’s fairy tales. She even wore long, velvet gowns around the fortress.