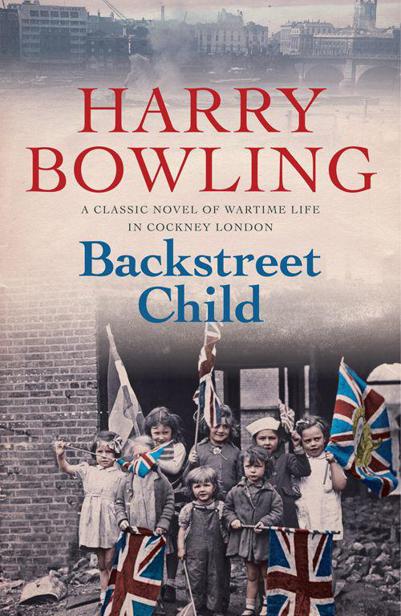 The right of Harry Bowling to be identified as the Author of the Work has been asserted by him in accordance with the Copyright, Designs and Patents Act 1988.

Harry Bowling was born in Bermondsey, London, and left school at fourteen to supplement the family income as an office boy in a riverside provisions’ merchant. He was called up for National Service in the 1950s. Before becoming a writer, he was variously employed as a lorry driver, milkman, meat cutter, carpenter and decorator, and community worker. He lived with his wife and family, dividing his time between Lancashire and Deptford. We at Headline are sorry to say that THE WHISPERING YEARS was Harry Bowling’s last novel, as he very sadly died in February 1999. We worked with him for over ten years, ever since the publication of his first novel, CONNER STREET’S WAR, and we miss him enormously, as do his many, many fans around the world.

The Harry Bowling Prize was set up in memory of Harry to encourage new, unpublished fiction and is sponsored by Headline. Click on
www.harrybowlingprize.net
for more information.

To my brother Ron, in loving memory.

Rain had been falling heavily all day, but as darkness set in, it finally ceased. In the empty Bermondsey backstreet the rain-sodden brickwork of the little houses glistened in the flickering light of the two gaslights, and overhead, pungent smoke from coke fires poured out of rickety chimneys towards the night sky. Rainwater ran along the gullies and down the drains with a gurgling, sucking noise, carrying with it soot and industrial dirt from the cobblestoned roadway.

In the chill night air of the deserted street two middleaged men walked along together, their hands thrust deep into their trouser pockets. They were of the same height, though one walked with a pronounced stoop and a rolling motion of his shoulders, betraying the fact that he had spent some time in the boxing ring. His companion walked straight-backed, his cap pulled down over his forehead and his red neckerchief tied loosely round his throat. They remained silent as they rounded the elbow of Page Street and caught sight of the light from the Kings Arms public house up ahead. At the bend stood a derelict yard, its entrance barred by high wooden gates that were peeling paint, sealed with a rusting padlock. Above the heavy gates was an arched signboard which had once announced in gold lettering that George Galloway & Sons, Cartage Contractors, operated from the premises. The words had been painted over when the firm moved to a larger site and a rag sorter moved in, but he too had gone, and now the yard was left to the mice and rats.

The straight-backed man glanced quickly at the first house on his right as they turned the corner. It was the house where he had been born, where he had grown up, until his family were forced out and had ended up stuck in the notorious Bacon Buildings nearby.

The two rows of little houses, all with their front doors bolted against the night, led up towards the corner pub and the Jamaica Road, and as the two men walked along to the end of the turning, a lone tram rattled by, shattering the quietness of the night.

Sounds from the bar piano reached the men’s ears, and as they entered they were greeted by the florid-faced, heavily built landlord Alec Crossley, who stood with his arms folded and his bulk pressing against the counter.

Before they could answer him an elderly man staggered up to the new arrivals and pushed between them, looking up at the round-shouldered one.

Alec leaned forward over the counter and glared at the inebriate. ‘Now I told yer before ter sit down an’ be’ave yerself, Nobby,’ he scolded him. ‘I ain’t gonna tell yer again. I can’t ’ave yer annoyin’ me customers. If yer don’t sit down I’ll chuck yer out meself. Is that understood?’

The elderly drunk grinned lopsidedly at Billy, ignoring the landlord. ‘It’s that silly ole mare Axford. That’s who’s upset ’im,’ he explained, jerking his thumb in Alec’s direction. ‘I wouldn’t care, I was only jokin’ wi’ the scatty cow. I dunno why ’e wantsa get so upset.’

‘All right, all right,’ the ex-docker growled back. ‘I only ’ope the new lan’lord is a bit more cheerful than you, yer miserable ole sod.’

The angry pub owner raised his eyes to the ceiling and watched as the old man returned unsteadily to his seat in a corner, then he turned to the two men. ‘’E ’ad the cheek to ask ole Florrie Axford of all people what colour drawers she was wearin’,’ he said, shaking his head and hiding a grin. ‘If it wasn’t fer Maisie grabbin’ ’old of ’er, Florrie would ’ave floored ’im – old as she is. Anyway, the first drink’s on the ’ouse ternight. What’s yer pleasure, lads?’

Billy Sullivan grinned at his companion and leaned an elbow on the polished counter. ‘I’ll ’ave a mild an’ bitter, Alec,’ he replied.

The landlord turned to the straight-backed man. ‘What’s yours, Danny?’

‘I’ll ’ave the same,’ Danny Tanner told him, pushing his cap onto the back of his head and revealing a mop of fair wavy hair.

While he was pulling down on the beer pump, Alec Crossley cast his eyes around the bar. There were the usual familiar faces, folk he had come to know very well over the years, and there were one or two strangers as well. Barflies, he thought. The sort who had heard that the pub was changing hands and had come along partly out of curiosity, and partly to see if there were any free drinks going. Well, they had been unlucky. Free drinks were for the likes of Danny Tanner and Billy Sullivan, men who had patronised the pub since they were young striplings.

The portly landlord passed over the two pints with a wide grin. It did not seem all that long ago that the two men had stood there at the counter looking smart and proud in their army uniforms before they went off to the bloody fighting in France. How quickly the years had rolled by, Alec thought with a sudden twinge of sadness. Now it looked as though history was going to repeat itself. Another war was looming, he felt sure, despite the views of certain politicians and some newspaper editors.

The two younger men picked up the frothing pints and raised them to the landlord in salute.

‘Well, ’ere’s ter you an’ yer missus, Alec,’ Danny said with a smile. ‘May yer retirement be an ’appy one.’

‘I’ll drink ter that,’ Billy said, taking a large gulp and rubbing the back of his hand across his lips. ‘I bet yet yer gonna miss this place.’

Alec shook his head. ‘Me an’ Grace ’ave ’ad this place fer nigh on firty-five years an’ we’ve made a lot o’ good friends,’ he said quietly. ‘It’s gonna be sad when we leave ’ere termorrer, but we made our decision an’ there’s no goin’ back.’

‘Yeah, it’s a long time ter be in one pub,’ Danny remarked.

Alec leaned forward on the counter and stroked his chin thoughtfully. ‘D’yer know, lads, I was only finkin’ about it last night. I’ll be seventy in December. Grace is sixty-five. I fink we’ve earned our retirement.’

‘Yer certainly ’ave,’ Danny replied. ‘Anyway, yer might be well out of it, if the curtain does go up.’

‘D’yer reckon it will be war?’ Billy asked, concern showing on his broad, ring-scarred face.

‘I’m certain of it,’ Alec told him. ‘All right, I know people was linin’ up ter cheer ole Chamberlain when ’e drove back ter Downin’ Street a few weeks ago, but yer’ve got ter look at the facts. Read yer papers an’ see what’s goin’ on in the world. Look at the air-raid shelters they’re puttin’ up everywhere, look at the amount o’ gas masks they’re dishin’ out. It stan’s out a bleedin’ mile what’s gonna ’appen. It’ll come sooner than later, if yer want my opinion.’

The piano player was taking a well-earned rest, and among the voices raised in earnest conversation at least one was holding forth with authority about the dangers of war. Nobby Smith was beginning to irritate another customer with his expert declamations.

‘What’s the good o’ dishin’ out gas masks?’ he remarked to Granny Phillips. ‘That there mustard gas can burn the boots orf yer feet.’