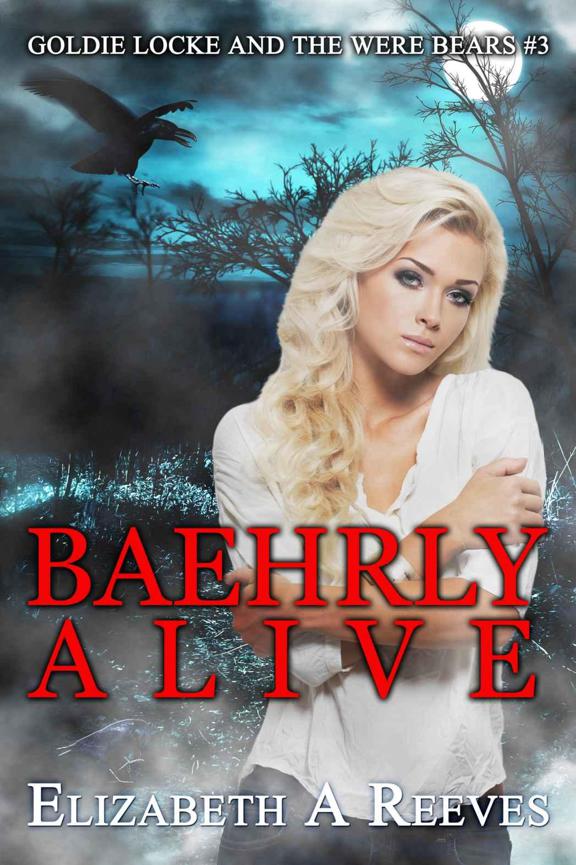 Goldie Locke and the Were Bears

No portion of this book may be reproduced, scanned, or distributed in any print or electronic form without the permission of the author.

This is a work of fiction. Names, characters, places and incidents either are the products of the author’s imagination or are used fictitiously. Any resemblance between persons living and dead, establishments, events, or location is entirely coincidental.

To those who fight and don’t know when to quit.

My thanks to my beta readers, that always make the story all that it can be. And, as always, the fabulous Hope Welsh—without whom I would never have the help I need to just sit back and write. Hope is a brilliant author of her own right, but she spends an inordinate amount of time-even to those dark small hours of the morning—helping build up
my
career. Thank you for all your sacrifices! I am blessed to know you! For my readers who are not yet familiar with her work—look her up! She’s a little…spicier than I am. Oo la la!

I am grateful every day for my family. All those little kisses and giggles—all that craziness and watching lessons—this is the rock that my heart and career are built on. I love you, boys! I love you, Keith! I wouldn’t even be this sane without you!

Life. It’s funny how that becomes the most important thing. We forget about everything else, just fighting and trying to preserve it.

Even more so now that I have faced death so many times.

Maybe that’s why everyone is always out searching for a meaning to our existence. Those eternal questions: Why are we here? What is our destiny? What does any of this mean?

And because life is everything, it means that death is evil, wrong—the thing we must fight against.

Not the ordinary things to be thinking over a bowl of cereal, but I had found myself getting philosophical of late.

Maybe that’s because every day I could feel life slipping out of my fingers a little more. Maybe it was that my stepmother, Gwyn, was growing paler by the hour. There was no hiding the fact that she was dying—inch by agonizing inch.

Any breath could be her last.

I glanced across the huge kitchen table that she had insisted belonged in our new farmhouse. Gwyn somehow managed to keep this air of tranquility about her. She was serene, accepting.

Everything that I was not.

I preferred to keep myself distracted from how I was feeling.

Luckily, running a preserve for endangered Magical creatures was full of distractions.

Donovan chose that moment to burst through the door. “Were you expecting a shipment of…” He checked the clipboard in his hands, “hellcats?”

“Oh, crap!” I shouted, jumping to my feet. “I totally forgot that they were coming today. I don’t even have the fire dome ready for them yet.”

The fire dome wasn’t actually a physical dome, but one built of Magic to enclose creatures that had a tendency to rampage around and flame everything in their paths.

It had been my first project after buying the preserve—I’d been highly motivated to get it done.

A person can only live with a baby dragon in her household for so long.

It wasn’t just for my sanity—but Gerti’s as well. She needed space to run and dig and—recently—learn how to fly.

A fireproof dome of Magic surrounded the twenty-odd acres that held Gerti and her other fiery ilk. These days she had plenty of room to do what she loved best—trying to fry squirrels.

I was pretty sure it wasn’t the same squirrel that she had declared war on at my old cottage. I mean, the thought of a squirrel stowing away in a moving van just so it could annoy a dragon seemed a little far-fetched.

It sure looked like the same one, though—singed tail, bad attitude and all.

The dome had no real effect on the natural surroundings of western Massachusetts. It only had an effect on Magical creatures.

That had been one tricky spell, but I’d had a whole group of Witches at my disposal, thanks to my mother’s connections.

Apparently I wasn’t the only one who cared about what happened to Magical Creatures now that Faerie was barred off from us—and had been for centuries.

I needed all the help I could get, which was why I had Donovan running around, trying to organize our growing chaos—despite the awkwardness between us.

That awkwardness that had everything to do with the gleaming rock on my finger.

I twisted it around on my finger, turning the hulk-esque diamond, surrounded by other sparkling gems, toward my palm. I thought it was ostentatious and gaudy.

But I’d chosen which bed to lie in.

Quite literally, it seemed.

I wound one of my golden curls around my finger. “Right. Well… that barn should still be fireproof from when Gerti lived there. We just have to herd them there and hopefully it will hold them until I can make them a better habitat.”

“Doesn’t the term ‘herding cats’ ring a bell with you?” he said.

I groaned. “I know. I just have no idea what else to do. Hopefully herding hellcats is a whole other barrel of mermaids.”

It was much worse.

Hellcats were tiny, fast, and set fires off quicker than salamanders. They also had the disposition of… well, hellcats. What made it almost worse was the fact that they were freakishly adorable. They had huge, amber-colored eyes and big bat-like ears that dwarfed their otherwise tiny and delicate size. They ranged in color from a smoky black to a brilliant gold—just like all the parts of a flame.

I dusted my hands off and climbed back to my feet, having just narrowly missed one particularly swift kitten. The grass around us—even though it was green—was starting to smolder. “How many of these arrived, again? I think I’ve lost count.”

I groaned. “And how many do we have in the barn?”

Donovan glanced over his shoulder. “Four.”

I fought the urge to lie down in the grass and never get up again. “Four? You have to be kidding me. I could have sworn we’ve caught at least fifty of these things.”

“What are you doing?” Thomas, my little brother, leaned over the fence, his backpack trailing from his hand.

“Are you back from school already?” I demanded, brushing the hair and sweat off of my face. “We’ve wasted a whole day on this?”

I looked at him for a long moment. Thomas was the spitting image of my dead father—all except for his pale blue eyes, which he had inherited from his mother, Gwyn. He was so mature and intelligent that sometimes I forgot he was only eight years old.

If Gwyn died, he’d be my responsibility—something I felt keenly.

I wasn’t ready to be a mom.

Heck, I wasn’t even ready to get married yet, and here I was, engaged and practically hand-fasted to Kodi.

Sometimes I wished life would just slow down enough for me to catch my breath.

Thomas dropped his backpack and climbed over the fence, frowning in concentration. I had seen that look on my father’s face more times than I could count.

Our
father, Daniel Locke—who had been murdered by poachers when Thomas was just a baby.

The first thing Thomas did was flop down onto the grass on his belly. He ignored the hellcats completely, twiddling a piece of grass between his fingers. I saw a slight flicker around him as he tapped into his Magic.

My brother was an Air Witch.

At first I didn’t see anything happen—then the air was filled with little air-sprites—wisps of hair and laughter. They looked vaguely human, but with slender, androgynous bodies. Some had wings like dragonflies, some like butterflies, and some had no wings at all. They circled around my brother, ruffling up his hair, giggling, and dancing around him.

Thomas murmured softly to them and they scattered in all directions. One flew past me, giving my hair a mischievous tug as it flitted by. I thought it whispered my name, too, but I couldn’t be sure.

“Do you see those things, too?” Donovan asked, rubbing his eyes. “Or is my imagination running away with me.”

“What are they doing?” Donovan asked.

The nearest hellcat—well up in a tree—started batting at the air, lashing its tail and bounding along the length of the branch. Without hesitation, it flickered out with a flash of flame and reappeared on the ground, pouncing at one of the sprites.

“Well, that’s a useful trick to know about,” I said dryly. “Apparently hellcats can teleport.”

The sprites danced around the hellcat, leading him closer and closer to where my brother was resting still on the grass, ignoring them completely.

The hellcat paused as he caught sight of Thomas. He lashed his tail and cocked his head to one side, as if considering his options.

Only then did Thomas turn his head. He made a soft kissing sound, just as someone would use with an ordinary cat. He offered the tips of his fingers for the hellcat to sniff.

The air filled with a deep thrumming sound.

Belatedly, I realized that the hellcat was purring. He rubbed his cheek against the proffered fingers and ducked down under Thomas’s chin. The air around us reverberated.

“He says his name is Caute,” Thomas said softly. He ran his fingers through the hellcat’s soft fur with the enraptured look of a person fascinated. “He is the king of the hellcats.”

“We’re trying to put you and your family in the barn so we can build you a castle,” Thomas murmured to the cat.

I raised my eyebrows at Donovan. A castle? We were supposed to build a castle for the hellcats now?

Caute glared at me from under Thomas’s chin, perfectly aware of my thoughts.

Stupid cats and their telepathic powers.

“Fine,” I conceded out loud. “I’ll build a castle. Will you please tell your… subjects that they need to go into the barn for safe keeping? It looks like it might rain tonight.”

“Come on,” Thomas said, climbing to his feet with the hellcat in his arms, ignoring the sparks that flew in all directions, singeing his shirt. “I bet Goldie will let her dragon build you a nice big fire to eat.”

I blinked. I guessed it made sense that a creature made of fire would want to eat fire.