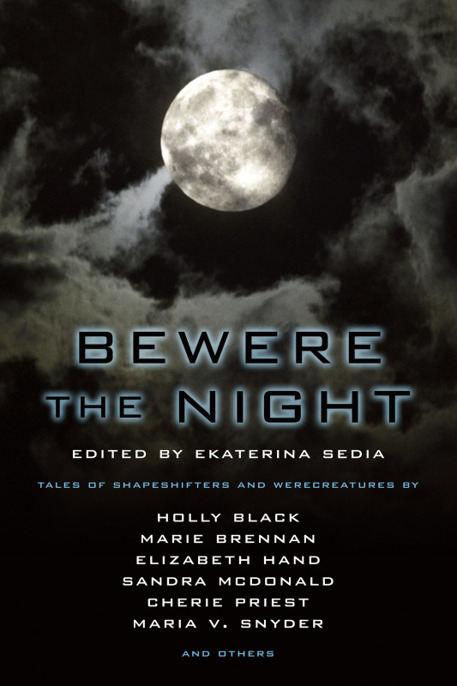 To those who cannot keep one shape

Cover art by Stephen B. Goodwin.

(Used under license from Shutterstock.com)

All stories are copyrighted to their respective authors,and used here with their permission.

No portion of this book may be reproduced by any means, mechanical, electronic, or otherwise, without first obtaining the permission of the copyright holder.

The Thief of Precious Things
by A.C. Wise

The Poison Eaters
by Holly Black

The Heavy
by Cherie Priest

Tusk and Skin
by Marissa Lingen

A Song to the Moon
by Richard Bowes

In the Seeonee Hills
by Erica Hildebrand

The Sinews of His Heart
by Melissa Yuan-Innes

(Nothing But) Flowers
by Nick Mamatas

Red On Red
by Jen White

The Were-wizard of Oz
by Lavie Tidhar

An Unnatural History of Scarecrows
by Mario Milosevic

The Gaze Dogs of Nine Waterfall
by Kaaron Warren

The Aphotic Ghost
by Carlos Hernandez

The Fowler’s Daughter
by Michelle Muenzler

Moonlight and Bleach
by Sandra McDonald

She Drives the Men to Crimes of Passion!
by Genevieve Valentine

Swear Not by the Moon
by Renee Carter Hall

And Neither Have I Wings to Fly
by Carrie Laben

After editing
Running with the Pack
, I was a tad apprehensive about taking on another shape-shifter anthology. Sure, it’s more than just werewolves, I reasoned, but how many variations on a theme can there be? The metaphor was, to me, obvious: violence and wildness, the human’s animal nature hidden by a thin civilized veneer . . . a theme as old as storytelling.

As it turned out, I should never have worried. The imaginations and inventiveness of the contributors amazed and delighted me. Their stories were richly diverse, both in terms of were-creatures and the themes they represented. Were-hummingbirds and were-socialists, failing families and immigrant resilience, stories set in the present, past, and future, a variety of cultures and influences, from China to Mexico to Hollywood. The protagonists of these stories are just as diverse: from children to old astronauts to mountain climbers to actors, all have singular stories and unique perspectives on their human and animal natures.

As for my assumption about the meaning of shape-shifter stories, my concept was wonderfully broadened: these stories are not always (or even mostly) about humankind’s inner animal nature. They are often about longing and wistfulness, the desire to be something we are not, to regain some aspect of ourselves that we’ve lost without ever actually possessing it, the yearning for something we cannot quite remember.

Some of the stories are recognizable as traditional tales of werewolves or animal wives; some take on the now-familiar tropes of urban fantasy. Others are singular: were-jellyfish; an entire city infested with a strange malaise; lycanthropes in an STD clinic . . . I could never have imagined!

The stories were chosen for their individual beauty and for their many differences of viewpoint, for their novel flights of imagination, or for their radical twists of the familiar tropes.

I invite you to enjoy these stories, one by one, to give each the room to breathe and unfold and to show you what’s inside. Some are funny and some are scary, but all are beguiling. Each of them will delight you with its love of language and of storytelling. They offer unique perspectives on shape-shifters and were-creatures, and I only hope that your notions of these strange beings will be challenged and expanded as much as mine were while editing this collection.

And most of all, beware: these stories might transform you!

THE THIEF OF PRECIOUS THINGS

Their shadows are crows.

They are two men, standing at the mouth of an alleyway, watching the night with dark, guarded eyes. Their long, black coats flap in the wind, and their shadows have wings. They have feathers and beaks and claws.

When the moon reaches the apex of the sky, they crush their cigarettes against the bricks. Their shadows break into a dozen birds each and take flight.

They have been waiting for her.

She is a fox-girl, running swift over the close rooftops. Up here, the world smells of dust and feathers. Fresh-washed laundry hangs from obsolete radio relays, satellite dishes, and cell phone towers, which sprout like mushrooms atop every building. Sheets and shirts flap in the wind, flags to mark her passing.

Her paws—black as burnt wood—fly over shingle, tile, brick and tar. The birds follow, floating on silent, star-lined wings. She stole something from them, something precious. They want it back.

When the roof ends, there is nowhere else to run. She jumps, changes in mid-air, and lands on two feet on the cracked pavement. The smells between the buildings are wet—all puddles, garbage, and food left to rot. She longs for the dry smells of the world near the sky. Neon turns the alley the color of blood. She is on four paws again, running.

The fox-girl can almost remember what she stole. She remembers a stone on her tongue. Images tumble through her mind: an unearthly blue glow, a chair, leather straps around her wrists, a needle in her arm. There was a woman, a human woman, and she buried something under the fox-girl’s skin. It burns.

Sheltering against the side of a dumpster, she snaps fox-teeth at her own flank, tastes blood, and spits fur and flesh onto the wet ground. Something catches the light, gleaming in the patch of bitten-free skin. It is a small square of plastic, patterned with silver.

She stole it from the men in the tower; she can almost remember why. The crows want it, the humans want it; it is precious. She picks it up between careful teeth, and tucks it in her cheek.

A door opens onto the alleyway, spilling yellow light and the scent of noodles and cooked vegetables. A young man stands framed against the light, holding a bulging, plastic bag full of wasted food. Her eyes meet his, but before he can speak, four and twenty black birds fall from the sky.

The crows fold their wings tight, diving for her eyes. She whirls, snapping and snarling at the storm of feathers. The precious plastic thing scrapes her gums raw. She leaps, twists—a war dance. She is all fox now, her animal heart beating hard inside a cage of burning bones, wrapped in fur the color of coal.

Amidst the chaos of wings, she hears the young man drop the swollen bag of trash. It splits, spilling new scents into the alley—meat and sauce, cooling in the night air.

He runs to her side, arms beating the feathered whirlwind. She could slip away, now that the birds’ attention is divided. A sharp beak draws blood from his arm, and he cries out. He is nothing to her, this young human, but she stays.

The crows are distracted, and she leaps, snatching a bird from the air. Her jaws close, crunching hollow bones. Liquid shadow slides down her throat, tasting of primordial tar, tasting of the decayed flesh of a million dead things from the beginning of time.

Twenty three birds lift, wheeling in the sky. They scream, and fall together again at the far end of the alley, coalescing into shadows where two men wait and watch with hard, dark eyes.

One man is missing a piece of the ragged blackness spread beneath him, cast by the alley’s light. His eyes meet hers, full of pain and surprise. He limps as he and his brother walk away.

A hand touches her back. The young man’s voice is soft. “Are you okay?”

She’s still postured to fight. Instinct snaps her teeth; the man yelps and pulls away. She tastes blood—his and hers—mingled with the lingering taste of crow-shadow oil.

She changes and lifts her head. She is a woman now, naked, crouched on blood-colored pavement that remembers the rain. She is bleeding, shaking, and tired to the bone.

Tracie Peterson by A Place to Belong
Boy Midflight by Charlie David
Superstar by Southwell, T C
The Prey by Allison Brennan
Spider in the Corner of the Room (The Project Trilogy) by Owen, Nikki
Forbidden or For Bedding? by Julia James
Facebook's Lost Love by Ron Shillingford
My Kenna: A Military Romance by Eva Natsumi
Forbidden by Nicola Cornick
Tameless by Gilmore, Jess
Our partner