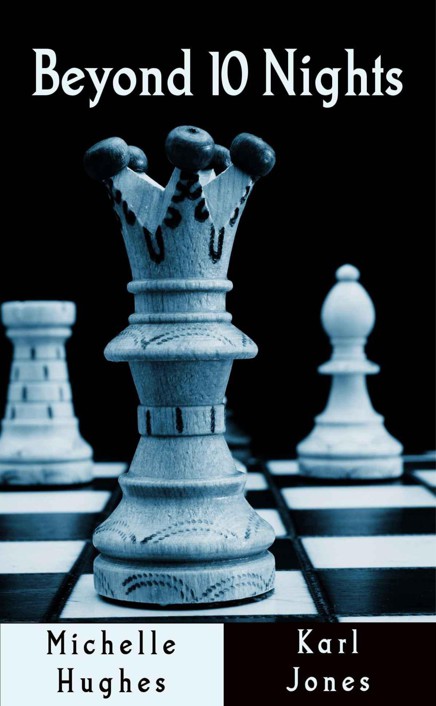 A Tears of Crimson Novel

All rights reserved. No part of this book may be
reproduced or utilized in any form or by any means, electronic or mechanical, including
photocopying or recording, or by any information storage and retrieval system,
without permission in writing from the publisher.

This is a work of fiction.  Names, characters,
places and incidents either are the product of the author’s imagination or are
used fictitiously, and any resemblance to actual persons, living or dead,
business establishments, events or locales is entirely coincidental.  The
publisher does not have any control over and does not assume any responsibility
for author or third-party websites or their content.

Beyond 10 Nights: Book Two in the Forbidden Desires
Series

To all the incredible people that helped make a dream come true.
For the readers that became friends, and friends that became readers.  To
every person who has a dream, and refuses to give it up, this book is for you.

Our heartfelt thanks to Tammy Middleton, at Tams Two Cents Blog.  Wanda
at Wanda's Amazing Amazon Reviews on Facebook.  What to Read After Fifty
Shades on Facebook.  The incredible friends of Crimson at Tears of
Crimson, we love you all so much!  Korner Kafe Exposed on Facebook.
And all our incredible friends who believe in us and keep us motivated to
write!  A special thank you to my mom, Susan Hall, the greatest promoter
on earth!

Movement next to her woke Leah;
through half-closed eyes she saw Rhett dressing and pushed herself up on one
elbow to stare longingly over his incredible physique. Memories of the previous
evening came back to her, bringing a smile to her face.

A soft sigh escaped her lips,
catching Rhett’s attention, and he turned toward her. His hands stilled on the
shirt he was buttoning as he allowed his eyes to roam over her languidly. “I’m
sorry, sweetheart; I wish I could answer that call in your eyes but something
has come up at the office and I need to deal with it.” As she stretched, her
breasts lifted, forcing him to bite back a groan of need.

“That’s fine, I’ve got something I
need to take care of anyway, even though I’d much rather spend the rest of the
morning in bed with you.” Her cheeks flushed as she realized how forward that
sounded.

He settled on the edge of the bed and
leaned over to cup her chin; lowering his head he placed a kiss on her full
lips. “And what does my beautiful princess have to do that is so important?”

The simple touch of his lips on hers
had her body aching and she wondered if there would ever come a time when she
didn’t desire him so strongly. “I left things in a mess with Janie,” she said
quietly after she found her voice. “I’m hoping our news will make her a little
more willing to forgive me.” Wrapping her arms around his neck, she whispered
into his ear. “Not to mention I need to look for a job. I made a start the
other night, but I need to send out the applications I prepared.”

Rhett held her against him so she
couldn’t see the look that crossed his face. The thought of her working wasn’t something
he relished. “Sweetheart, you know there’s no reason for you to go to work.”

Pulling back so she could meet his
eyes, Leah smiled indulgently. “Well, Mr. Hammond, I do plan on providing for
myself, even if I am marrying someone who can give me everything my heart
desires.” She noted the dark look in his eyes and shook her head slowly. “I
would be bored sitting around all day, Sir. I genuinely hope you can support me
on this.”

He wanted to argue the point with
her, to explain working was unnecessary, and demand she should stay at home.
There were other things she could do to occupy her days while he worked, he
thought, but the look on her face stopped him from replying. He had promised to
work on his control issues, and was determined to do everything he could to be
the man she deserved.

After a few moments, he nodded his
reluctant agreement. “You have my support, sweetheart, but I get to add a few
terms.” He smiled as defiance flashed in her eyes. “They aren’t difficult
terms, I am sure you will have no problem agreeing to them. I don’t want you to
work nights or weekends ever, those belong to me, and I don’t want you bringing
work home with you.”

“Mr. Hammond, you drive a hard
bargain,” Leah said with a grin, “but those terms are acceptable.” Her own
formality made her laugh and she slid out of the bed so she could grab up the
clothes she had discarded the night before to get dressed for the walk to the
house.

Rhett smiled in pleasure. “Make sure
you’re back here for lunch, sweetheart,” he told her as he finished buttoning
up his shirt. “I want us to eat together in the garden; there might even be
time for some dessert before I have to return to work.”

The way he lowered his voice on the
word dessert told her that what he had planned had little to do with edible
sweets and she blushed. “Why, Mr. Hammond, how could I resist such a delicious
offer?” Licking her lips teasingly she smiled again.

“Minx!” With quick strides, he
crossed the beautifully decorated gazebo and lifted her into his arms. “Lucky for
you, I have a business to run. I’ll see you at lunch time.” Lowering her down
his body slowly, he gave her a little tease of his own before winking and
making his way through the curtains to head for the mansion.

She watched him walk away and
shivered slightly. It truly wasn’t fair how easily he could turn her on, she
thought. The curtains that served as a door for the gazebo closed behind him
and she smiled, shaking her head at the memory of his proposal last night. He
had been so romantic with the scattered rose petals and kneeling as he waited
for her, uncertainty etched into his handsome face.

She was going to be Mrs. Rhett
Hammond, she thought in amazement, it still didn't seem real to her.

The thought lingered in her mind as
she finished dressing and then made her way across the grounds to the house. By
the time she reached the master bedroom, Rhett had already showered and was
dressed in preparation for going in to the office.

He gave her a perfunctory goodbye as
he hurried out on his way to work and left her to shower and freshen up. She
felt a little dismayed by the lack of a proper goodbye, but understood that he
had to leave, and that if he stuck around their goodbye might well turn into
more, which would delay him. She wasn't against the idea, in fact she quite
liked it, but realized she couldn't keep him from his business.

Stripping off she got into the
shower and bathed quickly but thoroughly. She then brushed her teeth, thankful
that Rhett kept spare toiletries around, ready for any eventuality. Her mind
was still whirling with the thoughts of marrying him, and it felt as if she
were doing everything on instinct alone.

By the time she had finished in the
bathroom Leah had managed to get her head out of the clouds, but only because
her best friend had found a way into her thoughts. Without being faced with the
gorgeous distraction of her fiancé, she remembered how angry Janie had been
over her decision to visit Rhett the previous night.

She hoped that the announcement of
her engagement would help remove any bad blood between Janie and Rhett. The
need to make peace with Janie was the most important thing in her life, outside
of her relationship with Rhett, and she hurried to dress so she could leave the
mansion.

Arriving at the condo, Leah quickly
set the alarm on her car before walking inside and over to the elevator. The
distance between the parking lot and the door of the condo wasn’t far, but with
all the emotional turmoil going on in her mind, it seemed like it took forever
to get there.

When she reached the door, she
unlocked it and stepped nervously inside. All the joy that had filled her since
the previous night evaporated the moment she saw her best friend in the
kitchen, a bowl of cereal in front of her.  Instinctively she knew that
her news was not going to go down well, and she hated feeling her joy leave her
at the thought of Janie's disapproval.

Janie stood the moment she saw her
friend enter the condo. She hated it when they fought; her friend had, in her
opinion, lost her senses the night before, and she hoped Leah had recovered
them in the morning light. “Dare I hope you’ve come home with some good news?”
she asked, hovering by the stool she had been sitting on a moment before, torn
between sitting back down and going to her friend.

“I think I have great news, and I
hope you’ll be happy for me,” Leah said, hesitating just inside the door. What
had seemed like a terrific idea just a short while before now had her stomach
in knots. It was apparent from the look on her face that Janie was hoping to
hear that she had ended her relationship with Rhett. “Rhett and I are getting
married,” she announced after a pause, needing to get whatever censure her
friend was going to offer out of the way so she could feel good about her
decision again.

Ghosts of Lyarra by Damian Shishkin
Realm 06 - A Touch of Love by Regina Jeffers
Babe & Me by Dan Gutman
Drew [The Texas Senator's Sons 2] (Siren Publishing Classic) by Hennessee Andrews
The Soul Consortium by Simon West-Bulford
Who Do You Love (Rock Royalty Book 7) by Christie Ridgway
Spin Some More by Garnier, Red
Werewolf in Denver by Vicki Lewis Thompson
Hinduism: A Short History by Klaus K. Klostermaier
Raveling by Peter Moore Smith
Our partner