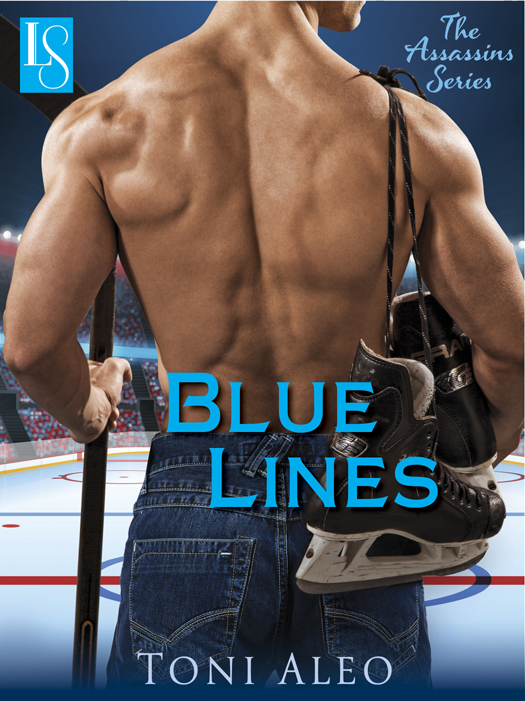 Blue Lines
is a work of fiction. Names, places, and incidents either are products of the author’s
imagination or are used fictitiously.

Published in the United States by Loveswept, an imprint of The Random House Publishing
Group, a division of Random House LLC, a Penguin Random House Company, New York.

L
OVESWEPT
is a registered trademark and the L
OVESWEPT
colophon is a trademark of Random House LLC.

B
OOKS BY
T
ONI
A
LEO

Falling for the Backup

I am still so broken inside and the only thing that keeps me going is that this is
what you wanted me to do.

I work every day, create these stories, these worlds because you gave me the gift
of reading and the talent of writing.

I miss you but I know that even in Heaven you are my biggest fan.

Mom, this book and all the books I write are for you.

Excerpt from
Trying to Score

Piper quickly turned from the bar at Wanna B’s to meet a pair of brown eyes, the same
eyes that starred in her dreams ever since she first saw them. It wasn’t that she
just liked the owner of the dark-as-night brown eyes; she was hopelessly in love with
him.

Her sister’s brother-in-law. The man whom she’d been lusting over for the past two
years. The man who could transform her into a puddle of goo with just one simple glance.
Erik was everything she wanted in a guy, and she would do just about anything to be
with him. Even in her current drunken state there was no denying she wanted him. All
of him.

Piper often dreamed of what their first time together would be like—when their lips
would meet, when their bodies would touch. But unfortunately, that would never happen
because he didn’t want her. That was why she couldn’t believe that at this moment
he was talking to her. Wait a minute, what the hell did he say?

Brushing the loose strands of hair from her face, she asked, “Excuse me?”

Erik looked like he hadn’t shaved in a month, and it did nothing but make her quiver
from the inside out. Her inner drunk slut screamed at her to climb up his hard body,
wrap her legs around his waist, take hold of his thick broad shoulders, and ravish
his mouth.

Well that sure did sober her up.

Piper gazed into Erik’s eyes. With the noise in the bar, there was no mistaking what
he’d said.

Masking her dismay with a sly grin, she said, “Who told you that nonsense?”

“Nonsense? I think not; my source is very reliable.”

As he looked off to the side Piper followed his gaze as it landed on her best friend
Audrey. OMG, that slut. Audrey was in the middle of the dance floor grinding it with
Tate Odder, the main goalie for the Assassins hockey team. Piper could not believe
that her friend would’ve revealed that bit of information but if Audrey did she would
totally have to rethink their BFF status. “That bitch,” she muttered.

“But I thought it was all nonsense,” Erik said slowly, bringing her attention back
to him.

He took a step closer, resting his hand along her hip. Looking down at his hand she
just wanted to laugh because she knew this was some crazy joke that God was playing
on her, until she looked back up to his face and noticed lust swirling in his eyes.

At that moment she was pretty sure Erik wanted her. But none of this was making any
sense. Erik was a hot famous hockey player for the Nashville Assassins and could have
his pick of any woman he wanted—something just wasn’t adding up.

Surely, this was all a cruel joke, but what if it wasn’t? There was no way she could
pass this moment up. “Maybe I lied,” she said breathlessly as she tried to flirt and
desperately failed.

He gave her a condescending smile before saying, “I know you did.”

“I have that effect on women,” he said with a slow, teasing grin.

He did have that effect on her, and Piper was feeling it all the way down to her toes.

On wobbly legs, she raised up onto her tippy toes to whisper in his ear, “Well, I’m
pretty sure you want me.”

Erik asked, “What evidence do you have to support that statement?”

She bit her lip as she glanced down to where his hand was resting at her waist. Her
gaze then traveled to his groin, where an impressive outline of his hard-on was on
display. She looked back up at him and said, “I’m pretty sure there isn’t much room
in those tight jeans.”

He ran his tongue along his bottom lip, his eyes holding hers for what seemed like
forever. Was it the alcohol or was it him? She didn’t know, but before she could do
anything or say anything, he announced, “I want to dance.”

Looking away, Piper was a little confused as she waved toward the floor. “Then, by
all means, there’s the dance floor.”

When he didn’t say anything, Piper looked back at him as he said, “I want to dance
with you.”

Before she knew what was happening she was being pulled onto the floor. “Lemme See,”
by Usher blasted through the speakers of the club and Piper knew that she would never
forget that song for the rest of her life. Erik brought her close, swallowing her
body in his. Sexy tattoos covered his very muscular arms. She sighed as his hands
started caressing her body. They traveled from her waist down to her bare thighs,
where he held her tight as she began to move against him. He turned her around until
he found the right spot, rubbing her bottom against his growing erection. It was mind-blowing.
What the hell had brought them to this moment, she didn’t know.

She had been waiting forever for this. Even if she didn’t think anything would come
from their evening together, Piper wanted to take this chance and she wouldn’t look
back with regrets.

The evening was like a dream come true. On or off the dance floor Erik was always
touching her; he never left her side. She could hardly believe this was happening
and she wanted to share this with someone but she couldn’t find Audrey anywhere. It
was like she up and disappeared. Erik was so attentive, the way his fingers would
slowly drift along her cheek or the way he would look directly into her eyes. He even
laughed at her horrible jokes. He was funny and self-assured, two traits she loved
in a man. And she adored his gorgeous dimples, which appeared whenever he smiled.

Not once did she think about his bad-boy reputation. All she could think about was
that they were there together for the evening. She wouldn’t burden herself with the
what-ifs tonight.

The bar announced last call when Piper and Erik decided to leave. Since both of their
rides were nowhere to be found they decided to share a cab.

“Yeah, it was great,” she responded, feeling giddy.

He scooted closer, wrapping his arm around her shoulders. Piper felt like she was
a fourteen-year-old schoolgirl with her childhood crush. When the cabdriver asked
where they were going, they both gave their separate addresses and leaned back into
the seat, enjoying the ride.

He was intoxicating; the way he made her feel was insane and Piper loved every minute.
She wanted to scream out in victory—
ERIK TITOV IS HUGGING ME!
But instead, she glanced up at him and shyly smiled. He slowly bent his head toward
her.
Holy mother of everything good and gracious, he is going to kiss me
, she thought just as their lips met. Piper couldn’t breathe or
move. All she could do was bask in the feel of his soft lips moving along hers. When
his hand came up, cupping the back of her head as his other hand gently held her chin,
she thought she would melt right into him. Piper moved her lips against his, and when
she ran her tongue along his bottom lip, she heard his moan of appreciation. He deepened
the kiss, taking her out of this world.

Piper believed that in life there were moments that changed everything and this was
one of those. She could live her life and not take any chances, but what fun was that.
When they finally parted for air, his eyes searched hers, his breath hot against her
swollen lips. Piper still couldn’t believe this was happening. For the past two years
she thought he never really saw her, but now she wasn’t so sure.

“I thought for the longest time you didn’t notice me,” she found herself saying.

Erik’s eyes softened, his thumb running slowly along her bottom lip. “Maybe I wasn’t
looking, Piper, but I am now”—he placed a kiss to the side of her mouth—“and sweetheart,
I’m not looking anywhere but at you right now.”

Breaking their heated glance, Piper looked out the window to see they were in front
of her apartment. The cabbie was looking at her through the rearview mirror and when
she glanced over at Erik, he, too, was looking at her expectantly. She had a choice
to make, she knew that, and a month from now she might decide it was not the right
one. But at that moment, there was only one option.

“Are you coming up?” she asked.

“Only if you want me to,” Erik responded quietly.

Erik paid the cabdriver as Piper quickly opened the door and hopped out; turning back
she saw Erik was right behind her. He wrapped his arms around her waist, hugging her
close, his rock-hard length stiff against the small of her back. Dropping her head
back onto his chest, she looked up at him as he looked down at her.

“Ready for some fun?” he asked.

She nodded. “I’ve been ready for a while.”

How To Avoid Death On A Daily Basis: Book Two by V. Moody
Forbidden, Tempted Series (Book 1) by Selene Charles
M or F? by Lisa Papademetriou
Perfect Victim by Carla Norton, Christine McGuire
Forgotten Boxes by Becki Willis
Murder At The Fete: A Lady Margaret Turnbull Culinary Cozy Mystery (Culinary Mystery Books Book 1) by C T Mitchell
The Trouble With Bodyguards: Part 1 by Kristina Blake
Is It Really Too Much to Ask? by Jeremy Clarkson
Harvest Moon by Alers, Rochelle
The Ice Marathon by Rosen Trevithick
Our partner