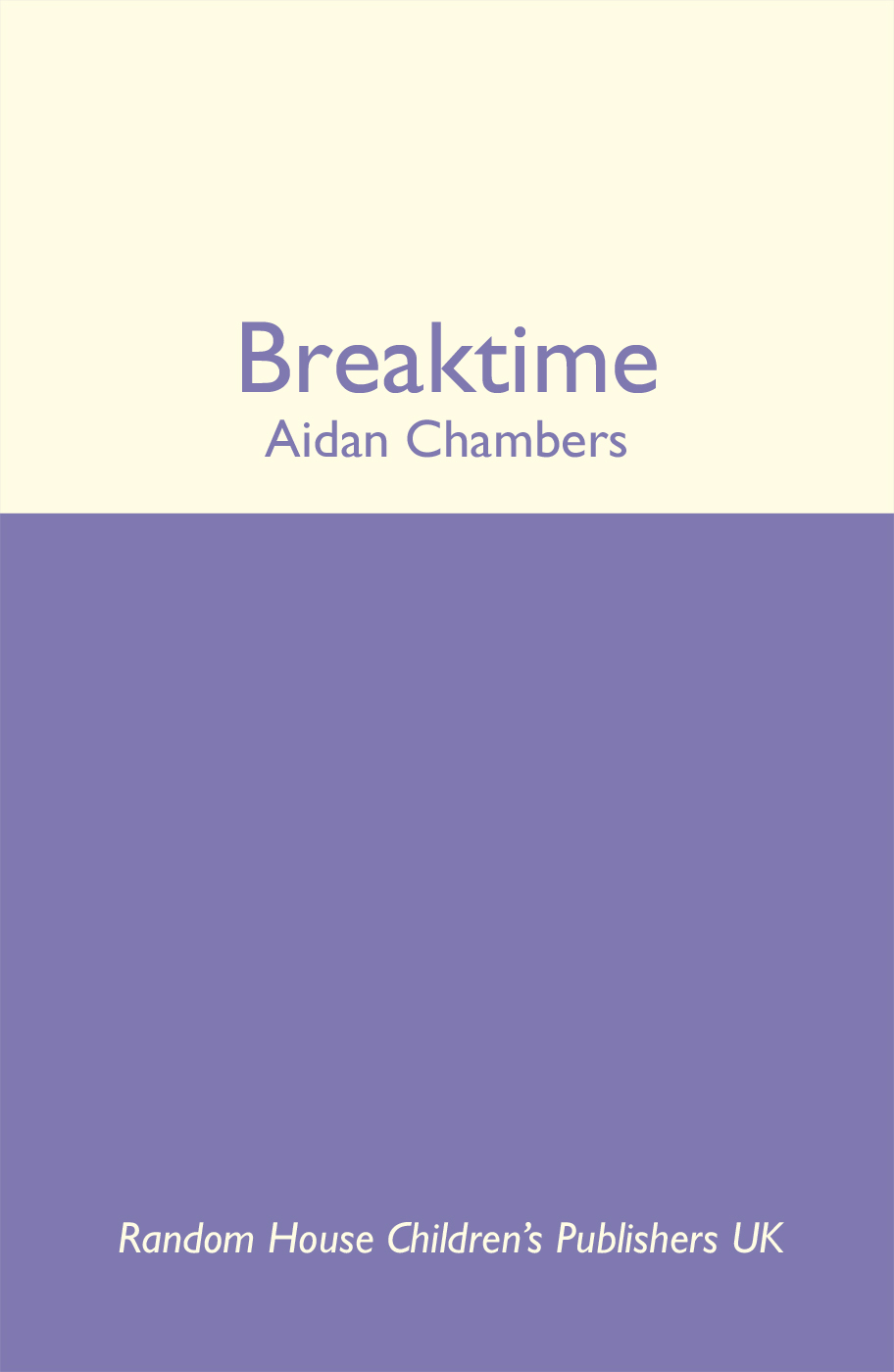 When Ditto challenges Morgan to prove that literature is crap he triggers off a chain of events to alter his outlook of life forever. Ditto faces a series of charges from Morgan against literature: that all fiction is Done. Finished. Dead; a sham and a pretence. He undertakes faithfully to record a life in the week of Ditto – with all the chaos of reality thrown in – and his literary creation reveals more about himself than he originally bargained for.

‘I TELL YOU
no lie,’ said Morgan, slopping his coin-machine coffee on to the scuffed woodblock floor of the sixth-form common-room. ‘Maureen Pinfold is a dream.’

Ditto stared at him in what he hoped was an enigmatic fashion. Since term began he had been perfecting this cool exterior manner, an attitude of unshakable intellectual poise.

Morgan licked dribbling coffee from the side of his plastic mug.

‘She’s ripe for dissection,’ he said, affecting his medical style. ‘I plan to operate as soon as the patient is prepared. And a theatre found, of course.’ He laughed. ‘It might have to be a field trip.’

‘I do not believe in purity.’ Morgan laughed again. He always preferred his own witticisms to anyone else’s. His laughter shook another expectoration of coffee on to the abused floor. Surveying the morning-break crowd that filled the room, he said, ‘You know the trouble with half this lot?’

‘. . . but they’ve done nothing. They talk very knowledgeably about Life and Sex and Politics and Religion and all that guff. But they’ve got it out of books.’

He lobbed his empty mug like a shuttlecock half across the room, into the metal wastebin by the coffee machine. A group
standing
by the bin turned and applauded. (Why did he have to be so insufferably gifted, hand and mind, Ditto wondered.)

‘What’s worst,’ Morgan went on as if unimpressed by his skill or the applause, ‘they get it out of stories. Out of lit-er-arr-tewer.’

‘And what’s so bad about literature?’

‘Literature is crap,’ Morgan said. ‘Fiction is, anyway. Novels and stories. It’s like that coffee they make us buy. A pretence. Ersatz.’

‘They ought to let us make our own,’ said Ditto, draining his mug.

‘You might say the same about the literature they force on us,’ said Morgan and chuckled.

‘Midgely says literature offers us images to think with. That its unreality has nothing to do with untruth.’

‘Cods,’ Morgan said. ‘Images out of a book make you think like a book. And old Midge can be a pompous ass. He should have retired years ago.’

‘That doesn’t diminish the truth of what he’s saying.’

‘No, but it does make it a lot less attractive.’

‘Get back to literature.’

‘I’d rather get back to Maureen Pinfold.’

‘You’re spoiling for a fight,’ he said. ‘Okay. I challenge you to prove literature is crap.’

‘You’re on,’ said Morgan, rubbing his hands with relish.

The klaxon sounded the end of break.

‘Damn it,’ said Ditto. ‘Can’t stay. Got a double period with Midge and Jane Austen.’

‘Pity. I’m free. But I’ll tell you what. I’ll jot down my Charges Against Literature—I mean fiction—and serve them on you at lunch.’

‘A subpoena I’ll enjoy discharging,’ Ditto said. ‘But why bother? Just tell me.’

‘Innocent!’ Morgan said. ‘My Charges will give me just the
excuse
I need to trap Maureen Pinfold behind her typewriter in the commercial room. While she does me the favour of typing my Charges, I’ll prepare the patient for dissection.’

‘If this was a story,’ Ditto said, ‘you’d call that typecasting.’

‘Thanks for the compliment,’ said Ditto, and left.

1. Literature as a way of telling stories is out-moded. Done. Finished. Dead. Stories as entertainment are easier got from film and TV these days. (And what was Fiction ever about except telling entertaining stories?)

2. Literature is, by definition, a lie. Literature is a fiction. Fiction is opposite to fact. Fact is truth. I am only concerned with truth.

3. Novels, plays, poetry make life appear neat and tidy. Life is not neat and tidy. It is untidy, chaotic, always changing. Critics even complain if a story is not well plotted or
‘logical’.
(Life, logical!) They dismiss characters for being inconsistent. (How consistent are you, Ditto? Or me?) And they admire ‘the literary convention’, by which they mean obeying rules, as in ludo or chess. SO:

4. Literature is a GAME, played for FUN, in which the reader
pretends
that he is playing at life. But it is
not
life. It is a pretence. When you read a story you are pretending a lie.

5. Literature is a sham, no longer useful, effluent, CRAP.

The morning over, Ditto joined Morgan in the dining hall.

An aftertaste of Jane Austen lingered in his mind as he sat down opposite his friend. Often he went only half-heartedly to Mr Midgely’s literature class. (Morgan was right: Midge could be unbearably pompous.) But somehow the man always riveted his attention. Uncomfortably sometimes; he was never easy, never made concessions and could, when marking an essay, be ruthlessly cruel. Yet he brought to life every writer, every book he dealt with. He seemed to devour them, making them part of himself, and then he regurgitated them like spirits, alive, out of
his
mouth, by what he said and the way he read aloud. As though he were a magician, a medium even. No doubt about it, a great talker was Midge. Had the gift of the gab, Ditto’s father said—all too often these days.

While Ditto pored over the Charges and inattentively ate his lunch, Morgan prattled on. Ditto only half listened. And Morgan’s voice, in any case, was almost drowned in the cacophony of three hundred people all talking too loudly as they chomped their way in concert through lumpy mashed potato, soya bean protein disguised as hamburger, and watery cabbage swimming in instant gravy.

Ditto felt sustained against Morgan’s diatribe by the lingering pleasure of his morning’s work. Wasn’t that very pleasure itself proof that Morgan’s Charges were false? Could literature really be dead, finished, if it gave him, alive, such enjoyment?

But how, he wondered, could he unsettle Morgan’s entrenched prejudice? Not by argument, that was sure. Morgan was bound to win, right or wrong. How then? By demonstrating his error? Perhaps. Be scientific, pragmatic. Morgan would certainly be moved by that.
Show
Morgan he was wrong.

‘You’re saying nothing,’ Morgan complained when the pudding was served—mushy stewed apple resurrected from dehydration and soused in the customary glutinous custard. ‘Here I am, hungry for argument to distract me from the offensiveness of lunch, and you’ve said nothing since arriving.’

‘This menu of your Charges must be digested,’ Ditto replied, jabbing his spoon at Maureen’s immaculately typed page. ‘And your comments on each savoury item have left me no room to say anything.’

‘Then ruminate privately,’ said Morgan, standing up and clattering his empty dishes into a pile. ‘I’ve a first team practice now, a full afternoon of chemistry, and I’ve just fixed an evening mixing it with Maureen. So the Charges found their target. See you tomorrow. So long.’

After school, Morgan’s
Charges Against Literature
tucked into his breast pocket, Ditto sets off for home. Mode of transport: a dilapidated bicycle once used by his father to carry him to work. The sprockets squeak at every third turn of the pedals.

Ditto’s legs push him on rapidly, for the weather is grey, damp, cold. But his mind is tardy. Home is not an attraction, school a livelier, friendlier place these days. The principal cause of this unhappy state of affairs—so Ditto complains—is his father.

For two years an illness has stalled the man from working. Other afflictions have resulted. A depressed and moody atmosphere in the house. Irritability. A pinching of the family’s income. (Ditto’s mother has had to take a part-time job behind a grocery counter to supplement their income. She will not be at home when Ditto arrives. Ditto has had his pocket-money cut, he relying on windfalls from relatives and weekend work as a window-cleaner’s mate in the streets round his own to provide his private needs.)