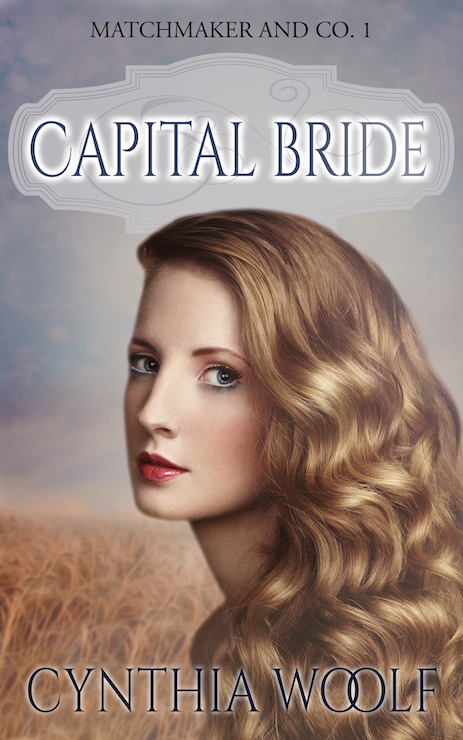 This ebook is licensed for your personal enjoyment only and may not be re-sold or given away to other people. The scanning, uploading, and distribution of this book via the Internet or via any other means without the permission of the publisher is illegal and punishable by law. Please purchase only authorized electronic editions, and do not participate in or encourage electronic piracy of copyrighted materials. Your support of the author’s rights is appreciated.

Capital Bride
is a work of fiction. Names, characters, places, brands, media and incidents either are the product of the author's imagination or are used fictitiously. Any resemblance to actual persons, living or dead, events, or locales, is entirely coincidental.

My husband, my best friend, my lover, my rock.

On the other side of the door was her last resort. Either this or prostitution and prostitution was not a choice. She couldn’t raise MaryAnn in that environment, nor if truth be told, could she lower herself to live like that. At least this way there would be some stability in her little girl’s life.

Sarah took a deep breath, turned the knob, and walked through the door to a better future for her daughter and, if she were lucky, for herself.

The office was small and precisely kept. A single desk with a straight, high backed wooden chair, one in front and one behind, sat in the middle of the room. She’d noticed the flowered curtains were open on the way in, curtains tied to the side. The small area was flooded with dazzling afternoon light. The walls were whitewashed and the desk well organized. There were several tables with neat piles of files along one wall. The other wall held several rows of pictures of women and men. None smiling, as that was the way pictures were taken, but all appeared to be wedding pictures. Below each picture was a small brass place with the names of the bride and groom and the date of the wedding.

A small, woman in her late thirties with fiery red hair, sat behind the desk. When Sarah got closer she saw gorgeous dark blue eyes behind the wire-rimmed glasses perched on the end of her nose. Her eyes were so dark a blue they could almost be called violet. They were striking and clear, honesty shone from them along with a “no nonsense” attitude.

“May I help you?” the woman asked.

“Um. Yes. My name is Sarah Johnson. I saw your advertisement for mail order brides.”

The woman looked Sarah over, taking in her clothes, her hands clasped in front of her and ending at her face.

“First, let me introduce myself. I’m Margaret Selby and I own Matchmaker & Company. Please, sit down. You’re older than the women we usually have. You’re also better dressed and don’t appear to be hungry. What would bring someone like you to my door?”

“I’ve been living with my great aunt. She passed away suddenly two weeks ago and the lawyer says I need to find other lodgings. My cousin, William, has inherited everything except a small stipend she left for me. William is selling everything. MaryAnn and I have nowhere else to go.”

Now was not the time to be less than truthful, if she wanted this woman’s help. “No.”

“Tell me, Miss Johnson, how did you come to find yourself with child at age twenty-two without being married? Surely you knew how those things happened by that age.”

“My fiancé was killed at Bull Run.”

“I understand. Many fine men were killed there and throughout the war.”

“Yes, they were. Lee and I planned on marrying before he left. He still had two weeks before he was supposed to go back. He was sure the war wouldn’t last long,” she sniffled and blew her nose into her handkerchief. “They called him back early, and then he was killed.”

“No need to go into further detail, Miss Johnson. Let’s get down to business, shall we?”

Sarah sat straight in the chair. “Yes, of course.”

She was more nervous now than she had been showing up on Aunt Gertrude’s doorstep six years ago, pregnant and unwed. They’d planned on putting out the story that Lee was her husband but one of the servants overheard and passed the information on to other servants, some of them in the homes of her Aunt’s friends.

Aunt Gertrude took it all in stride. She actually handled it far better than Sarah had. She’d cried for days until Gertrude shook her and said to get under control and stop feeling sorry for herself. So she’d had her beautiful MaryAnn and was raising her with Aunt Gertrude’s help. She would be missed for so many reasons.

“It’s Mrs. Selby. Now, please pay attention. I have several candidates that might work for you. Two farmers in Kansas and a rancher in the Colorado Territory.”

“Do you have a recommendation?”

“Well, neither farmer has children, though they are not unwilling to consider a woman with children. It would be awfully lonely for your MaryAnn with only you and her new stepfather for company. The rancher, on the other hand, also has a daughter, who is seven, I believe. They would be able to keep each other occupied while you attend to the work you’ll need to do. Can you cook?”

“Yes. Our cook taught me the basics. If I have a recipe, I can follow it.”

“Then, I suggest you write down all of your cook’s recipes. You’ll need them no matter which man you choose.”

“I’ve already got the ones I want. I’d hoped to put them together in a book one day. These men you’re talking about, how old are they?”

“Have you checked out these men?”

“Of course. I’m very thorough, Miss Johnson. I have an associate who travels for me and talks at length to each of our bachelors. We don’t have any brutes or other disreputable types with this agency. You can put your mind at rest.”

“I’ll need the name of your aunt’s lawyer to confirm your story, your current address and references, if you have them. Your cousin would probably be one to list. Neighbors who have come to know you would also be good ones. You see, we check out our ladies just as thoroughly as our gentlemen. I’m staking my reputation on you, Miss Johnson. I don’t intend to see it tarnished. That said, I understand that given your circumstances, there might not be a lot of people willing to give you a good reference. Rest assured that I take that into consideration.”

Sarah nodded. “I understand completely. Can you help me?”

Margaret Selby had seen her share of desperate young women. Those who were hooked on laudanum or its brother, opium. They didn’t make it. Sarah, with her manner and good clothing, was a lady through and through. But was she good material for a frontier wife?

Margaret got up, went around the desk and scrutinized the young woman in front of her. She cut a fine figure. Pretty blonde hair and sky blue eyes. Serviceable wool coat. A short high-necked, long-sleeved jacket that hit her at the waist. It matched her skirt perfectly, obviously made from the same bolt of cloth. Expensive. Well made. She would work well for Mr. John Atwood and his daughter, Katy. No need to tell Sarah that Katy wouldn’t talk and hadn’t since she’d witnessed her mother’s murder two years ago. No, Sarah, MaryAnn, John and Katy would all do well for each other. Margaret was sure about that and, so far, her record was unblemished.

“In answer to your question, yes, I believe that we can be of benefit to each other. My assistant will be around to talk to you this afternoon. Please make sure you are available.”

“Of course. I’m going to collect my daughter from our neighbor and then plan on being home after that.”

“Very good. I’ll contact you tomorrow morning with my decision but I feel, based on our interview today, that it will be a favorable one.”

“Thank you, Mrs. Selby. Thank you very much.”

The young woman left, and Margaret was alone with her thoughts.

A few hours later, her man returned with his report.

She had one of the two former Pinkerton detectives she employed check Sarah’s story and references. All was as she claimed. The report stated that she’d been living with her great Aunt Gertrude who had died, suddenly from a heart attack two weeks ago. Her fiancé was dead, died at the battle of Bull Run July 21, 1861. Daughter, MaryAnn, born April 11, 1862. Everything checked out. She would arrange for Sarah and MaryAnn’s passage on the train to Denver.

She sent a note to Sarah.

I believe we will be able to aid you. Return to my office on 7 May 1867. I will have your train tickets available. You will be going to the Colorado Territory to wed Mr. John Atwood. The train leaves on the 8 May 1867 and arrives in Denver on the 15 May 1867.

I believe I’ve found the perfect bride for you. Her name is Sarah Johnson. She is twenty-eight years old and has a five-year-old daughter named MaryAnn, who I believe will be a great friend to Katy. Both of your daughters will benefit from this alliance.

Please pick up Miss Johnson and her daughter at the train station in Denver on Wednesday, 15 May 1867.

She dusted the letter to dry the ink, then carefully folded it and placed it in the envelope she’d just addressed. It would go out with tomorrow’s mail, and reach Mr. Atwood within ten days, she hoped. That would give him plenty of time to prepare for Sarah and MaryAnn’s arrival.

Margaret smiled to herself. This would be a very good match. She felt it all the way to her bones.

Sarah got off the trolley four blocks from home. At least, it had been her home for the last six years. She’d always known that she and MaryAnn lived here by Aunt Gertrude’s good graces. But she hadn’t expected her to die, at least not so soon. Gertrude had been her great-aunt, that was true, but she was her paternal grandmother’s youngest sibling and was only two years older than Sarah’s own father, who severed all ties. He’d thrown her out when she’d gotten pregnant. Aunt Gertrude had been her salvation.

She walked up the steps to the door of the three story brownstone. There was no one to open the door for her any longer. William let all the servants go, with good references and the small stipend that Aunt Gertrude left for each of them.

William was really being very decent about it all. He’d kept the servants on for more than ten days after Gertrude’s death and he’d put off selling the house as long as possible but now it was listed and would probably sell in no time. Sarah couldn’t dilly-dally any more. She had to put her grief aside and “get on with it” as Gertrude would say.

Sarah entered the foyer and untied her bonnet, hanging it on the peg above the hall side table where she normally placed the mail.

She walked through the door and over to where he stood by the fireplace to kiss his cheek. “William, how are you? I hadn’t expected you until Sunday.”