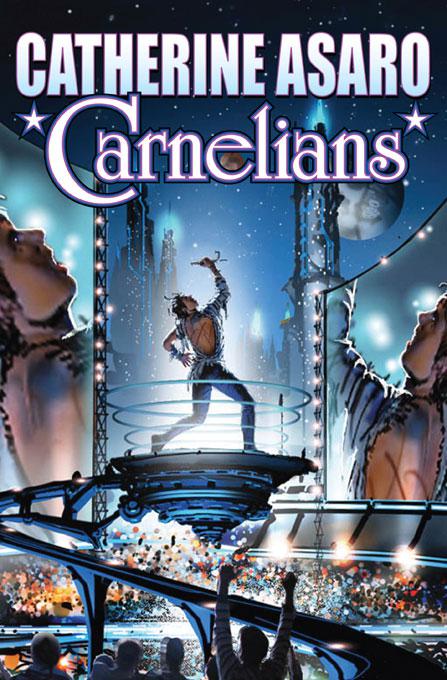 THE SAGA OF THE SKOLIAN EMPIRE

For her calm insights,

For helping me keep my head on straight,

And for her friendship

My thanks to the following people for their invaluable input: for their great (and fast!) comments on the full manuscript: Aly Parsons and Kate Dolan. To Aly’s Writing Group for their insightful critique of scenes: Aly Parsons, with Al Carroll, Bob Chase, Charles Gannon, John Hemry, J. G. Huckenpöhler, Simcha Kuritzky, Michael LaViolette, Ed Lerner, Bud Sparhawk, and Connie Warner. I’ve been fortunate to work with a great group of people at Baen Books (Simon & Schuster): to my publisher and editor, Toni Weisskopf; to Laura Haywood-Cory, Hank Davis, Marla Anspan, Jim Minz, Danielle Turner, Alethea Kontis, Joy Freeman, Becky Catchings, and all the other fine people who did such a fine job making this book possible. My thanks to my excellent agent, Eleanor Wood, of Spectrum Literary Agency; and my publicist Binnie Braunstein for her enthusiasm and hard work on my behalf.

I would like to thank the musicians who collaborated with me to turn the book
Diamond Star
into a rock opera, including my song “Carnelians Finale” that also appears in this book. On the CD by the rock band Point Valid and myself, the song is sung by Michael Belinkie, arranged by David Dalrymple, with Dave Nachodsky on bass, Joe Rinaolo on guitar, and Adam Leve on drums. My thanks to Janis Ian for her advice on the album, and to my vocal coach Becky Ocampo for her work with me.

A heartfelt thanks to the shining lights in my life, my husband John Cannizzo and our daughter Cathy, for their love and support.

Author’s note: The song “Carnelians Finale” is available on the CD
Diamond Star,
which can be downloaded from iTunes, CD Baby at www.cdbaby.com/cd/pointvalidca, at most other online vendors who sell music selections, and also from

It was one of the most effective weapons known.

It didn’t explode. It shot no projectiles. It didn’t spread chemical, biological, or physical poison. It created no flames or shrapnel.

It could bring down empires.

I: The Lost Time

Your critics, they all died

I
The Lost Time

“I’m already the most hated man in the universe,” Jaibriol said. “Tell me something new.”

“Damn it, Jaibriol,” Corbal said. He considered himself a man of great patience, but he was close to his limit. He and Jaibriol were standing on a balcony of the emperor’s winter palace overlooking the mountains. Mist blurred the forest that carpeted the soaring peaks.

“Be serious,” Corbal told him.

“I am serious.” Jaibriol rested his hands on the railing and gazed at the fog-draped landscape. A breeze blew back the glittering black hair from his profile, accenting his straight nose and high cheekbones. He had been born with phenomenal good looks, but Corbal had no doubt the young man had also enhanced his appearance. Anything to survive. As Emperor of the Eubian Concord, Jaibriol had made himself what everyone expected to see. At twenty-eight, he was still the youngest emperor in the empire’s history, and he had already been on the throne for eleven years. How Jaibriol had survived would make a fascinating study on the strategic choices of a brilliant but painfully naïve youth. One of his wisest decisions, of course, had been to turn to his elderly cousin Corbal as an advisor. Smart boy.

Of course there was also the empress, the gods take her forsaken soul. Perhaps Jaibriol’s savviest decision had been to marry the most powerful—and ruthless—woman among the Eubian Aristos. He had given her a reason to protect his handsome hide instead of tearing it to metaphorical shreds in her political maneuvering.

“You could enslave a trillion Skolians, and the Aristos would praise you,” Corbal said. “But now that you’ve signed a peace treaty, everyone hates you.” At least, Jaibriol’s own people hated him for that reason. The Skolians hated him because he ruled the empire that wanted to conquer their enticingly lucrative civilization.

“It’s done, Corbal. We’re going to have peace.” Jaibriol glanced at him. “Whether the Aristos want it or not.”

“Like hell.” Corbal didn’t believe for one moment that the military dictator of the Skolian Imperialate had any desire for peace. “Gods only know his motives. No, I take that back. His motives are obvious. He knows we’ll subjugate his little Imperialate. That’s the only reason he signed the treaty.”

“
Little?
” Jaibriol gave him an incredulous look. “One trillion people is ‘little’?”

“Compared to us.” They weren’t really arguing about the Imperialate. No, this debate was a distraction from the real battle.

Of course Jaibriol could never speak the truth, that his mother came from the dynasty that ruled their enemies. He would forever give lip service to the pretty lie that his mother had been a Eubian empress hidden away with her son to protect them against assassins. If the truth ever became known—that Jaibriol was also an heir to the throne of their enemies—the Aristos would turn on him with a vengeance.

Corbal had no wish to use that secret against Jaibriol. The emperor knew about too many of Corbal’s hidden skeletons. Nor did Corbal want the throne. Jaibriol’s wife had yet to produce an heir, which meant that as Jaibriol’s closest kin, Corbal was next in line. However, he preferred to wield his influence from the shadows. Staying off the throne kept him from becoming a target, especially now with Jaibriol’s infernal peace treaty, which had to be the most unpopular “success” Corbal had ever seen. So many people wanted the emperor destroyed, Corbal wondered how the boy slept at all. Then again, Jaibriol had the courage to sleep with his gorgeous barracuda of a wife. Gods only knew how he survived that trauma.

“It doesn’t matter what the rest of the universe thinks,” Jaibriol told him. “We’re going to trade goods with the Skolians instead of bombs.”

“And when I’m on the throne, after some assassin puts you out of your misery,” Corbal said sourly, “I’m sure Imperator Skolia will be just as pleased to deal with me as with you.” After all, the Imperator had no idea he was Jaibriol’s uncle.

“I’m going to survive.” Jaibriol regarded him steadily. “I may go down in history as the most despised man ever to live, but I’ll be damned if I’ll die just to further the rest of humanity’s desire to wipe itself out in warfare.”

“Very noble,” Corbal said. “Very dramatic. Very stupid. I thought you had outgrown this dream of yours to save humanity from itself.”

“The day I outgrow my dream for peace,” Jaibriol said, “will be the day I stop living.”

“I know,” Corbal said softly. Jaibriol had made up his damn mind long ago. Perhaps in a hidden recess of Corbal’s subconscious, he even shared the dream. But this peace would never succeed. In the end, it would tear apart both empires, from within and without.

Aliana Miller Azina’s happy world existed only in her mind. Reality was the fist of her stepfather Caul, the snarl of his mouth, the red stare of his too-small eyes. He looked like an Aristo, but he had never come close to that life. If his father was an Aristo, that exalted being had never deigned to acknowledge his illegitimate son; like everyone else Aliana knew, Caul wore the collar and wrist guards of a taskmaker slave. But those Aristo red eyes gave Caul an authority among the rest of the vermin here in the tech-mech slums, a reminder that Caul descended from a deity rather than crawling out from under a rock like everyone else.

Today Caul was yelling. Again. Fury turned his alcohol-swollen face even redder. Aliana stood pressed against the wall of the module where they lived. For most of the sixteen years of her life, she had tried to melt away when he screamed. It never helped. He would stop yelling when he started hitting. She hated the way his mouth moved, big and ugly, hated his crooked teeth, hated every scar and crease on his face. His black hair stuck up, glinting in the light coming through the window behind him, that window up so high.

Except today she was looking
over
his head. Today, she could see out of the window.

“You’re a stupid girl,” Caul shouted at her. “I told you never to be late.”

I wasn’t late,
she thought. She said nothing. It would only make it worse.

“You can’t do anything right,” he said. “I work, work, work, and you take advantage of me, like your slut of a mother, who couldn’t even give me my own child. No, I have to be happy with stupid you, the child of who knows what jack-ass idiot.” He was shouting so loud, every one of their neighbors in the crammed module yard could probably hear. Not that they hadn’t heard it before. “Don’t ever claim I’m your father,” he went on. “I’ll deny it.”

I’d rather die than have you as my father,
she thought.

Caul stepped toward her, his fists balling at his sides. “You make me do this.”

Aliana was gritting her teeth so hard, it felt like they would break. It hadn’t been this bad while her mother had lived. Sweet and gentle, she had done her best to protect Aliana. But that meant she had taken the full brunt of Caul’s anger. He had beaten her so many times that Aliana’s mother had finally given up and died when Aliana was five years old.

He came closer, shouting, incomprehensible, as if he were going in slow motion. His mouth opened and closed, and her ears rang with the noise. The air seemed too thick, like invisible syrup. He raised his fist, slow, slow, slow. Then it began to descend.

Something snapped in Aliana, something pulled too far, for too many years. It broke. Released. Today she did the forbidden. Her arm came up as his came down, and she caught his wrist. Her fingers, which had once been so small, now closed all the way around him. Her arm stiffened as she resisted the force of his swing, her muscles hardened by the years she had worked in the mesh factory, doing heavy labor the broken robots could no longer perform.

His fist stopped coming down.

Time snapped back to normal. In this unreal moment, she didn’t even feel the effort as she shoved him. He flew away from her, his face a mask of shock as he crashed to the floor. Her breathing rasped in the cold air as she strode toward him. He scrambled to his feet, his features so contorted with rage, she wondered that his heart didn’t explode in his chest.

He broke off as she ducked the blow and rammed her fist into his stomach. She had trouble aiming her blows, but even with her sloppy fighting, she hardly had to work. She slammed him into the opposite wall and pinned him there, holding him in place when he tried to throw her off. She looked down,
down at him,
and pounded her fist into his stomach, as he had done to her a thousand times, again and again and—

Offside by M. G. Higgins
Slow Burn by Terrence McCauley
Soul Trade by Caitlin Kittredge
Once Was: Book One of the Asylum Trilogy by Miya Kressin
Wonders of a Godless World by Andrew McGahan
Demon High by Lori Devoti
Finding Center by Katherine Locke
Cat Scratch Fever by Redford, Jodi
Desperado: Deep in the Heart, Book 2 by Tina Leonard
Who Won the War? by Phyllis Reynolds Naylor
Our partner