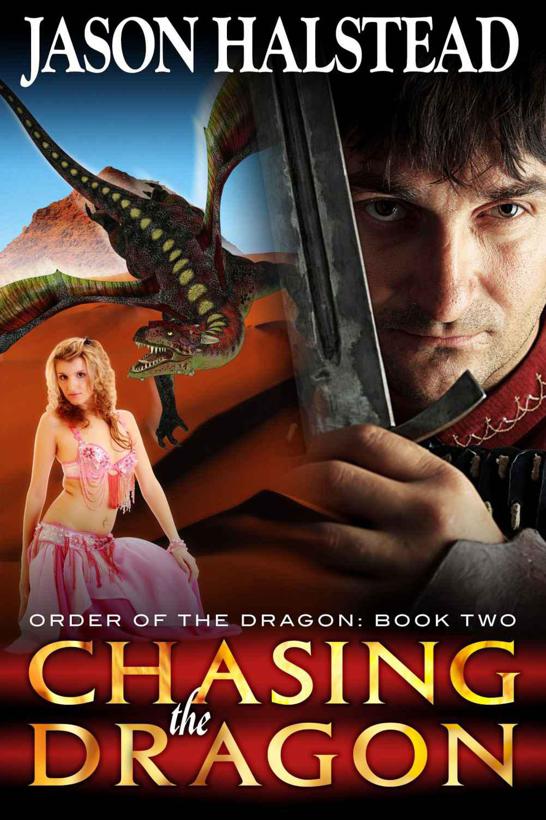 Keep an eye out for these other Order of the Dragon books:

Isle of the Ape

And look for the Blades of Leander books:

A distant roar echoed across the jungle from the east. The companions gathered around the campfire looked between the ruined buildings to the castle on the mountain top that the setting sun turned golden. Atop a tower, they could see the enormous ape, Bucky, standing.

Patrina, the kelgryn princess who never let her axe far from her side, turned to look at a man wearing hides pieced together from animals. She snuggled into the embrace of the armored man beside her and asked, "You're sure you want to leave all this behind?"

Carson smiled. "I've been trapped here for eight years with only that ape and the animals that hunted me as much as I hunted them. I think I'd like a chance to sleep easy for once."

The dwarf, Mordrim, snorted and said, "The animals in the rest of the world that will hunt you are two
-legged. Now hurry up and turn that boar."

Carson chuckled and gave the spit over the fire a twist. "I once wanted to see the world. I had no great love for sailing but that seemed the best way. I still have that urge."

"Well, you're welcome to come with us," Alto, the warrior who held the blond-haired princess, said. "But we're bound for the north, not the free cities you came from."

Carson waved his hand in dismissal. "It's a new part of the world, isn't it?"

"The mountains?" Garrick, the heavily muscled man from the lands north of the mountains, asked.

Alto nodded. "The time I spent alone in the mountains
, I never saw a company as large as the one you saw. Even with them serving the dragon, they traveled in bands of less than twenty."

"I fear it bodes ill for our friends in Highpeak," the young priest, Karthor, said. "I've heard Tristam has his hands full with miners being chased out of the mountains. Aleena and Celos were sent to investigate it."

Karthor smirked and answered his unasked question
. "The quest they've both been given to prove themselves worthy of being called paladins is to discover the source of the troubles."

Garrick snorted. "Two of them? I fought a host of ogres that killed a family of my brethren."

"We will go," Alto assured his barbaric friend. "Although I'm not sure we need to if you can face down such a force by yourself."

Garrick scowled at him. "You killed that many or more."

Alto shrugged, jostling the sleepy woman at his side. "Not at one time."

Patrina slapped him
. "Be still," she hissed.

Alto chuckled and gave her a one
-armed hug. She smiled and closed her eyes.

"Aleena doesn't concern you now?" he asked her.

She sighed and drew herself up. "It was some lingering fears from the troll's potion," she explained. She reached down to the axe resting at her side and said, "You're mine now and no woman, paladin or otherwise, stands a chance at you."

The others laughed, even Alto. Aleena had set her sights on him when she first met him and it had taken him over a year to convince her that he wasn't right for her. She'd joined the church of Leander to prove him wrong
, only to find herself in the process. Alto grinned at his betrothed. "Good, I hate all the attention. You can scare the women away."

Patrina gasped while the others howled with laughter. "All the attention? Think you
're that special now, do you?"

Alto leaned close to her and said with a smile, "No, I just hate it when I can't see you through a crowd."

Patrina's eyes narrowed and then relaxed. She smiled and kissed him, prompting more catcalls from the rest of them.

Namitus lifted his head up and nodded. He tilted his head for a moment. A smile slipped across his face and he reached under his tunic to pull out his pipes. He frowned and picked some dirt and leaves off them and then shrugged. "I wonder if the kelgryn will think unwashed savages from the north are attacking when we arrive."

"Hey!" Garrick challenged the wiry man. His stature was due to the elven blood mixed in his veins. "We wash. It's just that the mountain streams are cold much of the year."

The companionable laughter continued until Namitus put his pipes to his lips and began to play a song on them that quickly captured their focus. Patrina snuggled back up against Alto and let her eyes drift shut. Alto glanced at her and smiled, feeling that everything was right in the world and as it should be.

"Bah! How's a man to get anything done with all this racket
?" Kar, the groups aging wizard, slammed his book shut. "Senseless frivolities." He turned to his son, Karthor, and pointed his finger at him. "As rough on young boys as that church of yours is, at least they have the good sense to put work ahead of foolishness."

"I don't know about that," Karthor said with a smirk. "The church knows when a task deserves to be celebrated. Finding and helping our friends before the island claimed them is cause enough."

Kar snorted and turned to Alto. "What did you say the name of your sister's husband-to-be is?"

"Husband," Alto corrected. "We were headed north from their wedding when we stopped by this island."

Kar waved the insignificant details aside. "Name?" he repeated.

"Oh, Sulim Badawi, he's a distant relative
of the king, but most of the nobles down there are."

Kar's sour expression turned grave. He stood up and carried his book around the fire so he could hand it to Alto. "Open to
the page I marked."

Alto frowned and took the book,
and then carefully turned the pages until he reached the one that Kar indicated. It listed a roster of names. The ninth name on the page was Sulim Badawi. Alto looked up at Kar. "What is this, a listing of royalty for the kingdom of Shazamir?"

"In some cases, yes, but not by design," the wizard said. "This is a tome brought to
me by our young paladin friends after they destroyed the wizard and nymph who nearly did away with us in the enchanted forest."

"Why would they have it?"

"Chance, as far as we care," Kar said with a shrug. "What is important is what the book is."

Alto waited but the wizard had stopped speaking. "Okay, so what is it?"

"Look to the title," Kar said.

Alto flipped the book closed and read the cover of the book aloud. "
The Order of the Dragon
."

The discussion around the campfire fell silent. Alto looked up at Kar. "What is this?" he demanded.

"Rituals, practices, laws, and a roster of high-ranking members of the Order of the Dragon. The same group that—"

Patrina had risen beside him, alert and tense. "I spoke with Sulim and Caitlyn many times when he courted her in Holgasford," she offered. "He seemed quite taken with her. Perhaps his love changed him?"

"The Order of the Dragon butchered my family and—" Alto clamped his mouth shut and turned his head away. "The things they did to Caitlyn while they waited for me..."

Patrina reached out to her man and gently squeezed his thigh. Alto turned to look at her and then the others. All their eyes were on him. "Garrick, I'm sorry. I'm sailing south, not north."

Garrick nodded. "I'll sail with you. I'll not stand by while evil is done to your sister."

Alto's eyes narrowed but he nodded. Garrick and Caitlyn had been friendly enough before Sulim arrived that he'd feared something was developing between them. With the southerner's appearance and interest, Garrick turned away and left to return to his own people in the north. "I appreciate it. I'll not ask anyone else to help. This is my affair."

"Your family is my family," Patrina said to him. "We took her in and looked after her. She became my sister even if you and I are not yet wed."

"South, north, it's all new to me!" Carson said. "And I think the boar is finally done."

Everyone ignored the ranger
's words and continued to look to Alto. "And the rest of you?"

He was met with scowls and harsh oaths letting him know he was a
fool to question them.

"Then let this be the first action of the Company of the Dying Dragon," Alto said. "We'll strike for the dragon's heart this time, just as they've pierced mine."

Kar scowled and shook his head, drawing Alto's fiery gaze. "It's a stupid name," Kar said. "Fitting in this one instance, perhaps, but it still sounds silly."

"Kar, go and eat some boar. You're a difficult man when you're hungry."

"He's always hungry," Karthor lamented and drew a few chuckles from the group.

"What about my father? He's expecting word from us," Patrina said.

Kar looked up from the chunk of meat Carson had carved off the pig and handed to him. He scowled and then closed his eyes. When he opened them
, he said, "We can pen a message to him. I'll tie it to Blackwing and send it."

Kar shook his head and swallowed before saying, "I summoned him just now. He'll be here before dawn."

"Oh," Alto relented. He turned to Patrina and felt her squeeze his leg again, silently sharing her appreciation and support. "Eat up, everyone, then get some rest. Thanks to Karthor
, we've been healed of the worst of our hurts from the ape but we've some long days ahead of us."

"Long and hot," Namitus pointed out. "It's a dry heat that makes this place seem like paradise."

Patrina glanced down at the only clothing she had, her suit of magical chain and scale armor given to her by the troll shaman, Thork. It resembled a corset and a short skirt more than proper armor, yet the magic had served well to protect her thus far. "I think I'm dressed for it."

Alto tried to scowl but found his eyes lingered when invited longer than they should have. Patrina teased him by lifting his face with a finger under his chin until their eyes met. "Remember, one day soon you get to see what's underneath the armor."

Chuckles from around the fire were her answer. Alto nodded and offered a distracted smile. It wasn't her display of skin that distracted him—he'd seen her and other women in the kingdom of Shazamir wearing clothes as revealing or worse—it was the fear of what might be happening to his sister.

"Until then, you might want to borrow one of Garrick's cold mountain streams," Patrina finished. She added a kiss from her soft lips against his scruffy cheek and then went to fetch her own dinner from the roast boar.

Alto watched her go and found that, for once, she was wrong. What he needed was to wrap his hands around the throat of her sister's treacherous new husband.